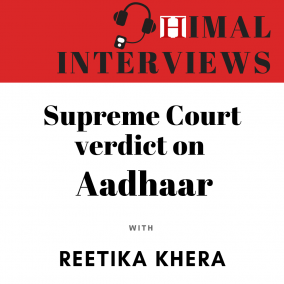 On 26 September 2018, India’s Supreme Court upheld the constitutionality of Aadhaar, the country’s controversial biometric national-identification programme. The ruling has, however, placed limits on its use by private entities, making it illegal for them to mandate it for providing services. Over the years, the project has faced criticism for enabling surveillance and invasions of privacy.

In this episode of Himal Interviews, we talk to Reetika Khera – professor of economics at the Indian Institute of Management Ahmedabad – who has been studying Aadhaar since its inception in 2009 and argues that the system impedes, rather than enhances, welfare delivery. Author of the forthcoming book Big Data Meets Big Brother, Khera speaks to our Deputy Associate Editor Shubhanga Pandey about the Supreme Court judgment, how Aadhaar is disguised as a welfare programme, and how it enables both state and corporate surveillance.