Skip to content
Crossborder > ‘A picture of malicious intention’ 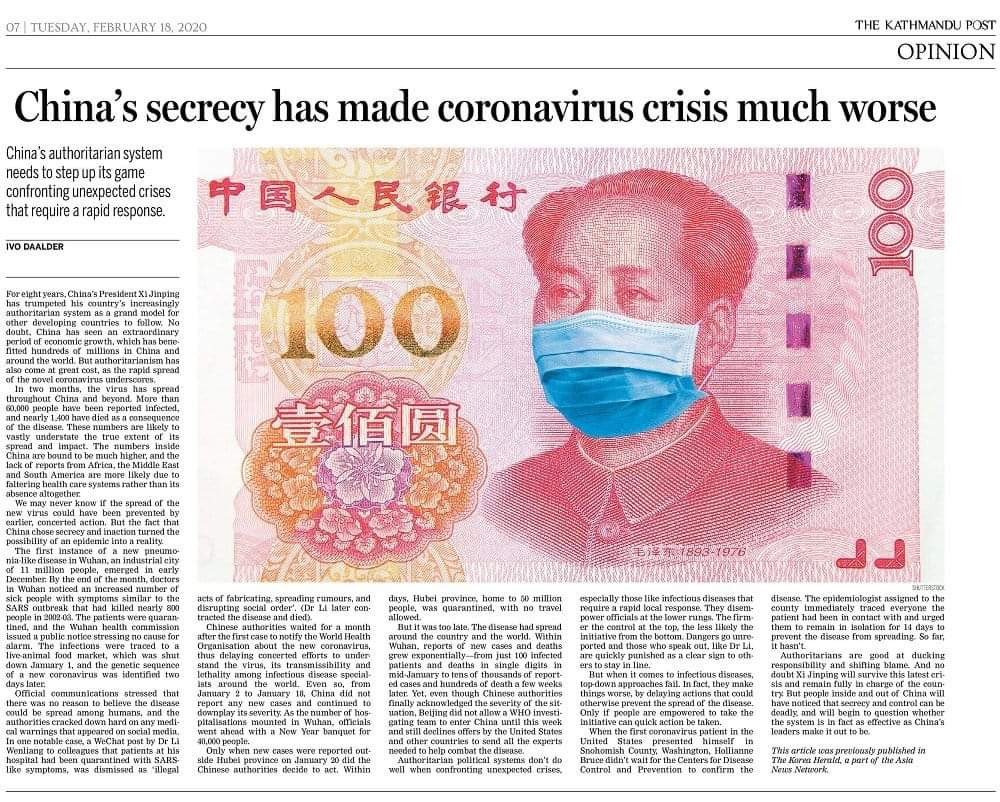 From the print edition of The Kathmandu Post, dated 18 February 2020.

What does Chairman Mao behind a surgical mask mean to you? Until recently, it was a convenient shorthand for the coronavirus outbreak and, linked to this, the impact the disease has had on Chinese governance and politics. In Nepal, however, following a sharply worded response by the Chinese ambassador to a Kathmandu newspaper, the image has come to signify the dangers of international pressure on the domestic press.

On 18 February 2020, the print edition of English-language daily The Kathmandu Post carried an op-ed titled ‘China’s secrecy has made coronavirus crisis much worse’. Previously published in the Seoul-based Korea Herald, the syndicated piece was authored by a former US ambassador to NATO and was predictably critical of China’s handling of the coronavirus epidemic. The newspaper paired the op-ed with a stock photo showing Mao Tse Tung, as seen on the 100-yuan banknote, donning a surgical mask.

In response, the Chinese Embassy in Nepal released a statement saying The Kathmandu Post had “with a picture of malicious intention, deliberately smeared the efforts of the Chinese government and people fighting against the new coronavirus pneumonia and even viciously attacked the political system of China.” The rejoinder was posted on Ambassador Hou Yanqi’s Twitter account, which has rapidly amassed visibility since her posting in Kathmandu, a relatively new phenomenon for the Chinese mission.

It is, of course, natural for diplomatic missions to defend their countries and routinely dismiss critical media reports. In Pakistan, for instance, an investigative report on hundreds of Pakistani girls and women being sold as brides in China made headlines in late 2019. In response, the Chinese Embassy in Islamabad said the report was “the same old stuff and not true”, adding “certain media has made groundless story again without full investigation and inrespect [sic] of the facts. Its intention is very suspicious.” In the past, other embassies and governments in Southasian capitals have similarly objected, formally or informally, to critical news reports.

In Kathmandu, however, the Chinese embassy was even less diplomatic, by castigating the Post’s editor, attacking his credibility and issuing a subtle threat. “Mr. Anup Kaphle, Chief Editor of The Kathmandu Post has always been biased on China-related issues,” the embassy said. The statement went on to claim that Kaphle had not only disregarded the facts but also become a “parrot of some anti-China forces”, accusing him of an ulterior purpose, which, the readers were informed, would be “destined to failure.” The statement ominously ends by noting the embassy’s “right of further action.” The abrasive tenor of the statement is remarkable given that the article and the image – both of which the daily had no role in commissioning – has been republished and circulated in newspapers and websites around the world.

For those concerned about the increasing attacks on media and free speech in the region, the Chinese embassy’s curiously harsh rejoinder to The Kathmandu Post is a worrying sign. The media landscape around Southasia is already distorted by the often-hidden nexus between business, politics and the media establishment, not to mention public-relations activities and press junkets organised by foreign missions. Adding directed personal and institutional attacks to that mix does not help.

#NCP The outbreak is just temporary, but friendship and cooperation are forever. Thank you, Sri Lanka. pic.twitter.com/Mq5AtKeuAx

Meanwhile, Ambassador Hou Yanqi need not worry, at least when it comes to finding more charitable journalists. As a recent video clip of members of Sri Lanka-China Journalists’ Forum showed, with some work, she will find journalists willing to come together and raise a fist in solidarity – if not in Kathmandu, then definitely elsewhere.