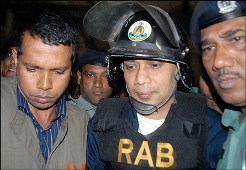 In February, three Hummers – US-made luxury SUVs estimated to cost at least USD 500,000 each – were found abandoned on Dhaka’s roadsides. A week later, in Old Dhaka, a crocodile turned up in the heart of a congested neighbourhood. Next, five pythons and a flock of rare deer were found abandoned; the snakes in a residential area, the deer in a disused iron foundry. Next was a luxury Toyota SUV, discarded on a highway.

As a military-backed interim government that suspended Bangladesh’s January elections mounts a massive anti-corruption crackdown under a state of emergency, Dhaka’s wealthy are feverishly abandoning luxury pets and toys that were once symbols of their power and opulence. By the third week of March, night raids led by the army had netted over 160 top politicians, former ministers and businessmen; their driveways and weekend retreats have given up a cheetah, hundreds of deer, peacocks, another clutch of Hummers and other luxury 4x4s, and even a late-model Porsche Cayenne SUV. In mid-March the interim government froze 53 bank accounts, mostly belonging to politicians, with collective funds worth a staggering USD 377 million. For the Bangladesh that lives on the other side of town – nearly half of whom make less than a dollar a day – these discoveries came as a rare window onto the lives of those who have been governing them.

At the heart of the corruption that is being uncovered is Tarique Rahman, son of former Prime Minister Khaleda Zia. Over the past five years, Rahman has become an emblem of plunder and cronyism in the public eye. He earned the nickname of ‘Mr Ten Percent’ for his alleged cut in almost every big business deal that his mother’s regime signed, and her tenure marked a meteoric rise for his business clique. Following his dramatic 8 March arrest (see image), Dhaka’s national media reported that Rahman may not only have squirreled away as much as USD 230 million to Malaysian bank accounts – which Kuala Lumpur has reportedly frozen – but his investments run as far afield as South Africa. Among other things, his closest business associates are accused of selling millions of dollars worth of overpriced electric poles to a rural electrification board in Bangladesh, which should have spent that money setting up power plants.

When the current ‘interim’ regime swept into power on 11 January, it did so riding on the coattails of public outrage over the crude power struggle between the two major political parties, the Awami League and the Bangladesh Nationalist Party (BNP). In the first week of January, Bangladesh was caught in the grips of pre-electoral violence that had left over 30 dead; at that point, the League was boycotting the polls slated for 22 January, accusing the BNP of having rigged the voter rolls. Though the army had been called out to aid the civilian administration in maintaining law and order, there is little doubt that a bloodbath would have ensued had the polls gone ahead.

It was against this backdrop that the United Nations, worried about the possibility of a sham election, sent an uncharacteristic letter to the Bangladesh military chief, Lieutenant General Moeen U Ahmed, warning him that he would seriously risk his forces’ peacekeeping contracts with the UN if he agreed to provide security for the elections. The Bangladesh Army contributes over 10,000 peacekeepers to the UN – more than any other country in the world – and rakes in a massive USD 300 million a year in peacekeeping contracts. It was no surprise, then, that by the evening of 11 January, Lt Gen Ahmed had ordered President Iajuddin Ahmed to cancel the election and place Bangladesh under a state of emergency – and to put in place a military-backed regime, which subsequently promised a massive cleanup of the country’s politics before any new elections.

In its first two months in power, the new regime restricted its anti-corruption crusade to the investigation of businessmen and politicians at the margins of the BNP’s and the Awami League’s inner coteries of power. It reshuffled the Anti-Corruption Commission, the police and the bureaucracy, and sought to ensure that there was proper distance between the judiciary branch and the executive. Then, on 8 March, the generals ended weeks of speculation by arresting Tarique Rahman and a handful of senior leaders of both parties. As Rahman faces trial in an extortion case that could see him serve up to five years in prison, Dhaka is in an excited state. Through this one major arrest, the interim government has earned a groundswell of support from the capital’s elite, which had had a ringside seat to follow the abuse of power under both the League and the BNP.

Elite purging elite
But the optimism among the elite may be misplaced. With Tarique Rahman’s arrest, the generals have clearly shown how far they are ready to go to see their goals met. Immediately following Rahman’s detainment, they formally abandoned the pretence of ruling the country from the shadows, by activating the powerful National Security Council, which features the three chiefs of staff of the army, though it is headed by a civilian. While the jurisdiction of the council is yet to be announced, its creation is clearly a move to give a formal framework to the control the military wields over the interim government.

There are also rumours that the council will remain powerful even after the political process is eventually restored. The generals know too well that a return to democratic process anytime soon will undoubtedly result in reprisals against those who have headed the ongoing cleanup, whereas a permanently powerful council would help against any future backlash. As the military flexes its muscle, even the foreign diplomats who had helped to engineer the gentrified coup of 11 January are realising that orchestrating a return to the barracks may be more difficult. With the government still silent on a new date for elections, the word on the street is that they may not take place until 2009. The fact that this new regime enjoys the unequivocal support of certain sections of the media and civil society is ample proof that its mandate is that of one elite purging another.

Bangladesh’s economy is facing a damaging slowdown. There might have been expectations of an economic boom related to the crackdown, but in fact, as the newly empowered Anti-Corruption Commission embarks on its crusade – equipped with the power to arrest anyone, without need for a warrant – a culture of fear is spreading through the business community. Amidst rumours of widespread capital flight, imports are down by millions of dollars, and the vibrant real-estate sector is faced with a crash because no one is willing to write a large cheque for fear of being investigated over the source of the funds. In the last week of March, prominent business leaders called for the interim government to lift the state of emergency as early as possible, even though the country’s apex business body, the Federation of Bangladesh Chambers of Commerce and Industry, had publicly solicited the emergency during the political strife of late December.

The serial insensitivity that is the hallmark of middle-class-bodied autocracies is also beginning to show itself. Since 11 January, army-led forces have demolished hundreds of thousands of shanties across Dhaka and its suburbs, suddenly making homeless more than 50,000 people. The government has also evicted hundreds of thousands of street-side hawkers. In their stead, the administration has offered the notion of a weekend market, which has failed to take off; this has inevitably bit into the livelihoods of millions of ordinary Bangladeshis. None of this bodes well for a regime that has failed to stop the rising prices of essential commodities. The prices of most essential foods had risen massively since the last elected government relinquished power in October 2006 – in some cases topping 70 percent. The current regime’s inability to rein in prices may go a long way in undermining its credibility among the poor.

For an administration that promised to bring accountability to governance and is fronted and cheered on by Dhaka’s great and good, the new regime has all too quickly amassed a damning human-rights record. Not only have 95,000 people been arbitrarily arrested since the state of emergency was declared, but extra-judicial killings in custody are a continuous feature. The US-based Human Rights Watch has noted that from 12-21 January, security forces killed 19 people, either in custody from torture or in ‘crossfire’ during arrest. Since then, that number has grown to 50, without security forces being held accountable for even a single death.

Ultimately, none of these failings will come back to haunt this current government as much as its own lack of constitutional legitimacy. For a regime that has mandated itself to hold free and fair elections, such a prospect could become a liability. All the reforms that the interim administration institutes, all the actions it takes – including the well-intentioned ones – will still require a constitutional amendment in order to attain retrospective legality when the political process is restored. In fact, this government’s own legality hinges on that same eventual amendment, which will have to be brought in by the next Parliament with a two-thirds majority vote in its favour.

Awami League supremo Sheikh Hasina recently promised to oblige this interim government with such a constitutional amendment if her party is voted to power, but there is no guarantee that she will hold the two-thirds majority in Parliament required to do so. If there is such a guarantee, however, with one single act, this government will have undone all the good it had intended to do when it seized power. For how can one rigged election be any better than another?

The Editors
Topics : Demolition of shanties has not evoked any protest by the middle class, Military-backed interim government´s actions against corruption
Comments