Skip to content
Announcement > Disaster Politics: Note from the Editors

Disaster Politics: Note from the Editors 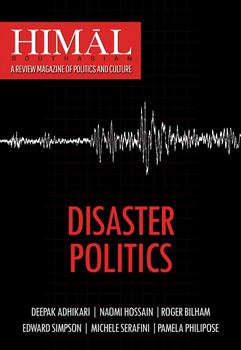 At noon on 25 April 2015, within just ten seconds, Kathmandu Valley was shifted five feet to the south, together with all its people and houses, temples and trees. In this geological movement, described in this issue by seismologist Roger Bilham, those of us at Himal were fortunate enough to be spared the worst. Yet the immediacy of the disaster and the proximity of the tragedy have certainly left its mark, prompting us to put together this quarterly on disasters in Southasia.

Our first challenge was identifying the scope of the issue. Given the scale and increasing frequency of disasters in Southasia, we decided to limit the theme to natural disasters, but were then faced with the challenge of defining ‘natural’. Earthquakes, such as the recent one in Nepal, can be ascribed to the wholly natural movements of tectonic plates miles below the surface of the earth, even though they are now being triggered by human activities, such as oil extraction and large reservoirs.

However, when it comes to devastation caused by other natural phenomena such as floods and landslides, the lines are blurred. What is the impact of damming rivers on the subsequent fury of its waters? Does the natural ebb and flow of water become disastrous because human settlements and infrastructures are too close to the banks? Do landslides bury villages because of deforestation further up the slopes? Are these disasters manmade or natural, or a combination of both? As Nityanand Jayaraman writes in this issue, the development of the Tamil Nadu coastline for tourism and urban dwellings has eroded natural shock absorbers such as estuaries, mangroves and flats, leaving it more vulnerable to tidal waves including tsunamis.

This issue largely leaves out those disasters triggered primarily by human involvement (such as the 1984 Bhopal gas disaster), but does consider human factors, in the form of political and economic arrangements, that shape the impact of natural events. Though nature’s fury is often seen as a great equaliser, indiscriminate in its choice of victims, the disproportionate impact of disasters on the poor and the marginalised was evident in Nepal. The majority of deaths occurred in town and country due to the collapse of houses made with mud-mortar. There was also inequality in the response that followed, with villages in remote valleys not only suffering from the absence of immediate rescue, but also falling victim to uneven relief. Rehabilitation and reconstruction efforts are expected to be tilted against the poor in the remote regions.

Indeed, recovery efforts are shaped, and even manipulated, by human agency especially after the departure of the lights, noise and cameras of the media entourage. It is this phase of disaster response that our issue seeks to unpack: post-disaster politics – a complex web of policy-making, economic and political shifts, and foreign aid commitments and conditionalities, among others.

That disasters give dividends for some is well known and is demonstrated by how the 2004 Indian Ocean tsunami displaced the poorest communities from the beaches of both Tamil Nadu and Sri Lanka only to be replaced by powerful real-estate investors. In an examination of three disasters in Sri Lanka – the malaria epidemic in 1934-35, the civil war, and the 2004 tsunami – Kalinga Tudor Silva demonstrates the different impact across classes and ethnicities. If British colonial policies left a population undernourished and more susceptible to an epidemic of malaria, the high density of the poor in internally displaced people’s camps was a vivid reminder of those prone to be most victimised.

The politics played out in post-disaster situations make and unmake not just riches but also politicians and their claims to legitimacy. The Gujarat government’s ineptitude in the immediate aftermath of the 2001 Bhuj earthquake facilitated the rise of Narendra Modi. As Edward Simpson and Michele Serafini explain, the economics of aid and reconstruction also gave shape to the neoliberal economic agenda – better known as the ‘Gujarat Model’ – now sought to be emulated at the national level in India with Modi as the prime minister.

Another instance of the radical political potential of disasters was seen in the Ganga-Brahmaputra delta. In East Pakistan of the time, the state’s inadequate response to the 1970 Bhola cyclone gave impetus to the nationalist fervour that gave birth to Bangladesh. However, the newly elected Dhaka government’s rule was short-lived due to the failure to address the famine of 1974, and this helped create conditions for the military coup of 1975, argues Naomi Hossain.

Beyond domestic politics, natural disasters can enable certain realignments of global power. For instance, it was by ‘refusing’ aid during the 2004 tsunami that India under the Congress-led government signalled a geostrategic shift, writes Pamela Philipose. The stance was strengthened by India assuming the role of the principal donor in subsequent disasters in Southasia, most recently in Nepal.

In researching our infographics on Southasian disasters of the last few years, we found that one of the most difficult tasks was to follow the money trail. Foreign financial support following disasters is calculated in different ways; sometimes, aid given for a particular disaster is folded into or replaces other previous aid commitments to the recipient country; sectoral allocations differ from donor to donor and disaster to disaster, and is designated differently by different governments. We also found that aid committed for specific disasters remains outstanding years later, an example being the aid for the 2004 tsunami.

Military forces are usually at the forefront of disaster response, across all forms of government. But military and authoritarian regimes often fail to respond adequately because of their insulation from the population. In 2005, the Burmese military junta pushed through a political referendum just a week after the devastation of Cyclone Nargis, apparently living in a dystopian reality of its own, as Larry Jagan demonstrates in his 2008 article selected from the Himal archives.

Deepak Adhikari gives us a close-up view of the confusion of the first response by the state in the immediate aftermath of Nepal’s 25 April earthquake. Seismologist Roger Bilham’s prescient writings on the dangers of “the next great earthquake” in Nepal was first published by Himal in 1994 and served as a foundation for much of earthquake preparedness activity in Nepal thereafter. Writing now, as in 1994, Bilham suggests the need for an even greater sense of urgency, given the inevitability of big tectonic shifts in the Himalaya. It is a point underscored by Kunda Dixit’s critique of the absence of response plans in Nepal in 2011, evidence of which were clearly visible recently.

In addition to matters of policy and politics, this issue also consists of a photo feature from the Nepal Photo Project, which captures lesser known moments of human poignancy emerging in the aftermath of the disaster. In one photograph, Sundaya Tamang whispers to her dying cow Lakshmi who lies half buried; in another, a group of young girls resume classes despite not having a school house.

We also carry our usual segments in this quarterly: original fiction from Assam; reportage on the Sunderban oil spill; reviews of the reprint of a stunning utopia envisioned by a Bangla feminist, and of surrealist Urdu writing in Pakistan; and a selection of articles published on our website recently.

~See the full table of contents of ‘Disaster Politics’.