Myanmar or Burma? Read to find what Himal editors decided on, and what their argument was. 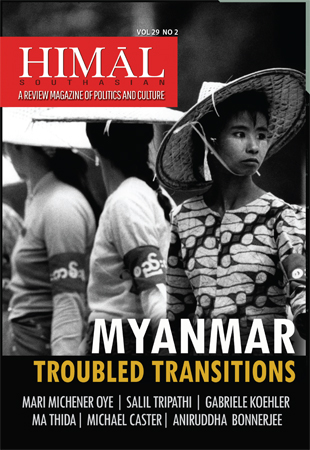 As we discussed putting together this issue, a not-unexpected debate broke out within Himal Southasian’s editorial team. Were we going to call the country ‘Myanmar’ or ‘Burma’? Himal had stuck to ‘Burma’ through all the years of reporting on the junta, for the same reasons that democracy activists were using it – symbolising protest against the military dictatorship which had formally renamed the country. However given the difficulties already surfacing with governance, human rights and inclusion in the newly democratised country, there were suggestions that we should go back to ‘Burma’, for the same reason that we had stayed with that term for so long.

The editors’ decision to start using ‘Myanmar’ in 2013 was based on the arguments of Nandita Haksar, the human-rights lawyer and activist, who has defended many pro-democracy activists from Myanmar. As we were editing her article, she wrote to us, “I know Daw Aung San Suu Kyi has said she prefers to call her country ‘Burma’ because the military junta changed the name to ‘Myanmar’ in 1989 without consulting the people, but then the British did not consult the people when they changed the name of the country from Myanma Pyi to Burma. International law recognises the country as Myanmar.” Burma, she said, could be used when the context dictated.

Some argue that ‘Myanmar’ should be the only name used now, since ‘Burma’ is derived from the primacy of the country’s largest and dominating ethnic group, the Bamar. But that argument does not take us too far. Both names originate in the same root word, Bama, which is the colloquial form of Myanmah. We have used context, as Haksar suggested, to guide our usage.

One can of course overdo it, and so we have followed advice from our contributor to this issue, Mari Michener Oye, not to use the convoluted ‘Myanmarese’. We have followed most other official spellings such as Ayeyarwaddy (instead of Irrawaddy), Yangon and Naypyidaw, with the exception of the term ‘Rohingya’, which the Myanmar government does not recognise but we use, believing the self-identification of the community is a human-rights issue.

The hostility towards the Rohingya and Suu Kyi’s studied refusal to speak up for them, is, as Salil Tripathi reports, perplexing. Documenting the wretched condition of the “unwanted, uncounted and disenfranchised” in the refugee camps, Tripathi, who has travelled to both Myanmar and Bangladesh, points out how neither country wants them.

Though the debate around the Rohingya often appears completely polarising, Michael Caster points out how the two narratives are reconcilable. The Rohingya are a community with historical presence in Myanmar, recorded by the Scottish traveller Francis Buchanan as early as 1799. However, population flows continued over several centuries over fluid territorial borders in the years before colonisation. Regardless of how different groups of the Rohingya trace their antecedents, Caster argues that Myanmar is currently in violation of international jurisprudence. As of now, locally-administered policy restricts the rights of the Rohingya on marriage and the number of children they can have, on grounds of population control, implemented selectively in Rohingya-dominated areas. A broader set of laws on race and religion, enacted as recently as 2015, imposes restrictions which largely impact Myanmar’s religious minorities, among whom the Muslims are the largest.

While many find the attitude within Myanmar towards the Rohingya puzzling, writer Ma Thida, who heads the newly established Pen Myanmar, explains how decades of dictatorship has affected the psyche of a nation. Becoming ‘fierce’ about one’s own well-being is a reaction to living under an oppressive regime, she writes. “Fierce individuals do not seek to exact revenge on those who caused them harm; instead they target weak individuals and minority populations – those who cannot retaliate. These acts of revenge are fuelled by a continued fear of dictators and brutal governance.”

Ma Thida, who was sentenced to 20 years in prison because of her activism and released only because of international pressure after six years, writes eloquently of the lack of coping mechanisms. Not only is there repressed anger and continuing fear, but, after living under oppressive conditions for over 60 years, people don’t know how to express either. Reclaiming space is difficult since, as photographer Nic Dunlop writes: “The junta’s hold on the population was a complex mixture of coercion and collaboration. There was no need to have soldiers on the street; people policed themselves.” Apart from close family members, anyone could have been an informer. In the fluid landscape of lifted restrictions, freedom is still a slippery terrain, as people come to terms with freedom from fear. The transition to parliamentary democracy over the past five years has been long in coming, but the final transformation was quick, given the six decades of authoritarian rule. Restoring the trust that is the basis for a social compact will be a longer, perhaps even more difficult journey.

The significant steps being taken for creating a democratic Myanmar are cause for elation. A popularly elected government is in place for the first time since Myanmar became a modern and independent nation-state. This issue of Himal has used the real name of one of our contributors for the first time. But even as the rupture from the past is celebrated, there is need to recognise the continuities. Though a democratically elected government is in place, the military holds the balance of power, controlling 25 percent of the seats in Parliament and three crucial portfolios: defence, border management and home affairs. There has been less recognition of the constitutional clause that enables the generals to retake power at any time on the grounds of national security and even less comment on their control of the General Administration Department (GAD). The GAD, under the Home Ministry, is the civil service for the state and regional governments and is the administrative backbone for the country’s districts and townships. This subcutaneous control exercised by the military through the country’s administrative structure will continue to challenge the exercise of democratic polity.

Equally difficult to dislodge may be the economic policies, development parameters and financial controls put in place by the departing regime. Any long-term justice will require the participation of the ethnic minorities, of which Myanmar has 135 that are officially recognised. Armed groups of many of these minorities have been waging war against the central state, some since before Burma’s independence from colonial rule. A ‘nationwide ceasefire’, concluded by the Thein Sein government in 2015, may prove more of a hindrance than a starting point, since it was premised on the divide and rule policy followed by the Myanmar military, the Tatmadaw, writes Yola Verbruggen. Some of the armed groups have long been a law unto themselves, enforcing resource extraction against the wishes of the local populations that they claim to represent, while others have provided health, education and electricity to the local communities. Any peace initiative will also have to take into account the armed militias supported by the Tatmadaw, some of which have morphed into drug cartels, a legacy that dates back to the Cold War.

Initial proposals of economic development appear to focus on a centre-first approach that gives primacy to the Barman areas, writes Mari Michener Oye. All parties use the term ‘federal’, she says, but do not agree on what it means – a challenge for Panglong 2 which seeks to arrive at a new federal compact. However, the inequitable approach is not just a remnant of past strategies. The new government has shown scant evidence of developing sound economic and governance policies, having come to power largely on the basis of a political campaign, write Gabriele Koehler and Aniruddha Bonnerjee. The NLD government, in its early months in office, seems reluctant to depart from the neoliberal economic model it inherited. Apart from its role in infrastructure development, current policies do not view the government as a vehicle for delivering social and economic justice to a deprived population. Many of its policy pronouncements on a range of social-economic issues lack substance while its social welfare policies are under-developed, despite Myanmar featuring on the lower scale in terms of human development indicators after decades of military rule.

In the rush to make up for delayed economic growth, Myanmar runs the risk of abandoning the adoption of sustainable models of growth, opting instead for a fast-track path that could be high on resource extraction and low on environmental safeguards. An example is the energy policy that seeks to meet the expansion of energy needs, both for domestic use as well as the influx of industry expected with the increase in foreign investments. The 2015 policy, still in place, has increased the role of coal as a source of energy from the current usage of two percent to 20 percent, says Edith Mirante. Not only is the reliance on ‘dirty coal’ likely to be highly polluting, but it will require Myanmar to import coal at a time when many other countries are moving away from coal-fuelled energy-generation, such as neighbouring China.

Myanmar’s neighbours will continue to play a considerable role in its economic development. While stricter border regulation can preventsmuggling of resources such as timber, Myanmar’s position as a corridor to the richer ASEAN nations makes development of road infrastructure through Myanmar a lucrative proposition for neighbours such as India and China. China, writes, Pradip Phanjoubam, has already developed the Mekong region as an economic unit while India is yet to act upon its ‘Act East’ policy. While this neglect is due to the average Indian’s obsessive fixation with its western borders, he writes, the danger now is that India may see its Northeast region and Myanmar as not much more than a land corridor connecting the Indian mainland to ASEAN or a beltway for extracting the rich natural resources of the region. The hard, precise political boundaries of nation-states have interrupted the natural economic regions and developing these could supersede the obsession with political boundaries and closed ethnic identities. While Phanjoubam terms this possibility a welcome miracle, such hope is not wildly unrealistic. Myanmar, after several decades, not only faces the challenge of transition but an opportunity to move towards social justice – not just for its own peoples but the region.

The selections from our archives – some from before the transition to democracy began in Myanmar, and some since then – give a glimpse into Myanmar’s recent historical landscape. In addition, there is also a selection of fiction and recent articles from our website.

Finally, as he moves on, a note of thanks to our Associate Editor JJ Robinson, who set us on the path to realising this Myanmar issue.

We look forward to your feedback on this quarterly.