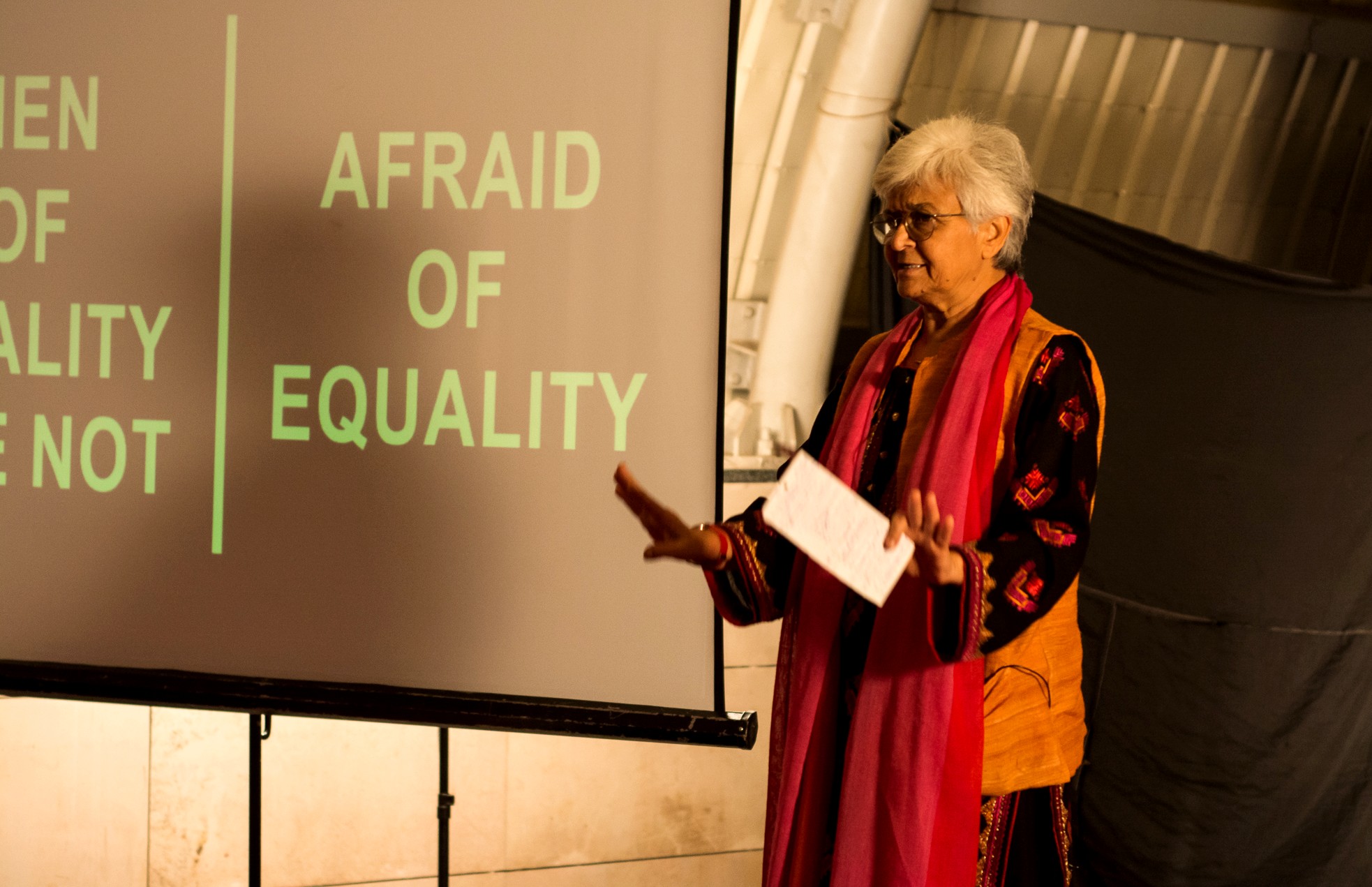 Kamla Bhasin always called herself one of India’s ‘Midnight Generation’, a reference to those born at the time of India’s Independence. Prime Minister Jawaharlal Nehru’s invocation of freedom at midnight later found its way into Salman Rushdie’s award-winning novel Midnight’s Children. Told from the standpoint of Saleem Sinai, born precisely at the time the clock struck midnight, the novel is about a generation that lived to see India as they knew it disintegrate before their eyes. Considered a seminal example of magical realism in Southasian English-language writing, the novel takes us through the violence, the contortions, the messiness, and the heartbreak that is independent India. Written at the time of the Emergency in the 1970s, it would, in the end, tell only half the story.

Kamla Bhasin was indeed one of ‘Midnight’s Children’, carrying with her the ideals of that generation: a search for justice, equality and self-respect, after having left a colonial past where Southasians were denied their basic dignity. Non-violence was her core belief and the Partition her defining experience. From this reality came a sensibility determined to transform the world, bring peace between India and Pakistan, and see social justice within India’s borders and beyond. Asceticism and self sacrifice were motivational forces while handspun cotton and local products filled her home and her programmes. With Kamla’s death, we are again reminded how that era is coming to an end, replaced by religious nationalism, economic inequality and social extremism which cut to the core of her being in the few years before her death.

Such movements and collaborations of that period brought together activists like Kamla with leading women intellectuals in Southasia.

Kamla was a daughter of a doctor who worked in rural India, especially in Rajasthan. Her first memory of social injustice was caste bigotry and violence; the caste privilege, the discriminatory use of wells and the denial of essential water to the Dalit community that she witnessed mortified her. The outrage she felt at these practices stayed with her for a lifetime, and she spent a great deal of her time challenging the caste system, engaging in cross-caste programmes, and working toward Dalit rights and self-respect in the villages. Before she gave her full time to the women’s movement, her work at the Food and Agriculture Organisation and in Bangladesh was about development and dignity in the rural areas.

Partition was the other childhood memory that stayed with her and became an obsessive reminder that her nation was born in blood. She threw herself into peace initiatives and peace programmes between India and Pakistan. She created strong bridges between Indian and Pakistani women and included Pakistani participants in all the activities of Sangat, an organisation she set up to train and mobilise Southasian women to pursue activism in their own countries. Her death was mourned deeply in Pakistan, where the enmity between states prevented the full expression of loss and solidarity across borders.

Kamla’s greatest passion was to create and sustain a Southasian women’s movement, whose main force she was in the 1980s and the 1990s when the region’s women came forward as peacebuilders and justice seekers as a common front throughout the Subcontinent. Due to the travel barriers between India and Pakistan, many of the meetings where such organisations and individuals came together were held in Sri Lanka, at the International Centre for Ethnic Studies, the Social Scientist Association or the Women and Media Collective. Kamla ran workshops involving substantive discussion, dance, art and other forms of creative expression, which were life-affirming experiences for many participants who remained connected to the movement in subsequent years.

That is how I would like to remember Kamla: joy at sunset.

Such movements and collaborations of that period brought together activists like Kamla with leading women intellectuals in Southasia. Kamla would consult extensively with Kumari Jayawardena, Bina Agarwal, Nighat Said Khan, Ritu Menon, Savithri Goonesekere, among others, before she planned her programmes. In these interactions, Kamla would take the ideas of these important academics and theorists and popularise them. With their assistance, she would work on creative booklets, posters, songs and speeches to communicate these ideas to people who did not come from an academic background.

Kamla did not mobilise in a vacuum. Today, it is common to find that Southasian women’s organisations often implement programmes, whether relating to violence against women or political participation, based primarily on ideas and practices conceptualised and developed in the West. In the 1980s and the 1990s, it was different. Southasian women were at the forefront of developing theories and doing cutting-edge intellectual research. They were public intellectuals – both scholars and activists. They created the frameworks that they felt were relevant for Southasia. Kamla was very aware of this. She harnessed their knowledge and made them the backbone of her activism.

Kamla would take the ideas of these important academics and theorists and popularise them.

Kamla was also a part of Southasian movements that mobilised for social justice in each other’s countries and which brought outstanding feminist lawyers from the neighbouring countries together. It was a time when Safia Bibi, a visually impaired 22-year-old Pakistani woman raped by her employer’s family, had no recourse because she had to have four witnesses to prove her case; or when Mathura, an Indian teenager who came to the police station to make a complaint, was brutally raped by her supposed protectors. These cases saw Southasia-wide mobilisation and solidarity, and resulted in major changes in law and policy.

The global movement on violence against women was also gaining strength around the same time. Dowry deaths, the trafficking of girls and domestic violence had their Southasian manifestations, and so experiences, strategies and best practices were constantly exchanged as women’s groups pushed their criminal-justice systems to respond. One significant victory in the Mathura case was that the Supreme Court of India held that because the rape took place in a police station, and constituted custodial violence, the burden of proof would shift: the police had the responsibility to prove the act did not take place, since they were in control of the evidence. In the following years, legislation against domestic violence was enacted, sexual harassment was defined, and lawyers like Indira Jaising and Rani Jethmalani kept going to a responsive Supreme Court in important cases that would form the backdrop of the rights Indian women enjoy today. What was remarkable about Kamla was that she, along with other feminists, marshalled the support of various activist women’s organisations to mobilise and agitate on these issues so that every one of these cases was not only a victory for an individual but for the community of women in Southasia.

Southasian women were at the forefront of developing theories and doing cutting-edge intellectual research.

For all of us in Southasia during those years, peace was an important concern. A civil war raged in Sri Lanka, and there was military confrontation on the northern frontiers of India.  This not only separated countries, it also divided societies, including women. The Southasian women’s movement was one of the few places where religious and ethnic identities were set aside to develop a common understanding of patriarchy and women’s roles in society. In between the many meetings to discuss substantive and strategic issues, women came together to despair at the violence and hatred around them. Strong friendships that were built then have lasted through decades, and were reflected in the commemoration events held for Kamla. It was a movement without borders, regional in emphasis but also connected internationally. At its height, it was an exhilarating experience; one felt that anything was possible for Southasian women.

And yet, in the end, we may have all failed. There were many successes and advances. We won many battles but we may have lost the war. My last conversation with Kamla was a week before her death. “There is so much to do,” she kept repeating. She felt strongly that her task was not over. Afghanistan was erupting, and she was in touch with all regional organisations trying to get women at risk across the borders. “I want to work with you on Afghanistan,” she gasped. But her body was too frail and did not let her go on. Everything she stood for and worked for was being challenged by governments and social forces throughout Southasia. Many of her friends had withdrawn to a quiet retirement. But not Kamla. She was ready for the fight and prepared to battle. Minutes before she died, she asked for her notebook. As Dylan Thomas has written, she raged and raged against the dying of the light. She was our fighter and struggling without her will not be the same, at least for my generation.

It was a movement without borders, regional in emphasis but also connected internationally. At its height, it was an exhilarating experience.

Kamla faced enormous personal tragedies in her life. Her son Chottu was disabled at an early age due to a severe reaction to a vaccine. She never hid him away; he was always with us, loved by all of us. Her daughter Meeto was a beautiful, brilliant child of the Southasian women’s movement. She was a straight-A student at Oxford University, and each of us mothered or protected her in some way or in some place. But she too was taken away. Kamla was inconsolable; it was a tragedy that never left her or any of us. Midnight’s children – perhaps Rushdie was right.

But we cannot end a tribute to Kamla in sadness. She was the most fun-loving, carefree, gregarious person. All seminars and workshops she led would end in songs of laughter and inspiration. Even at her funeral, her friends broke out into these songs. A Youtube video shows how her feminist recitation of Azadi set an audience on fire. The Southasian women’s movement under her influence – and the influence of the larger-than-life Sunila Abeyesekera, the filmmaker Ein Lall, the dancer Chandralekha – would after a long day of meetings erupt in joy just as the sun was setting. That is how I would like to remember Kamla: joy at sunset.

Radhika Coomaraswamy is the Chairperson of South Asians for Human Rights. She was also an Undersecretary General of the United Nations and UN Special Rapporteur on Violence Against Women.