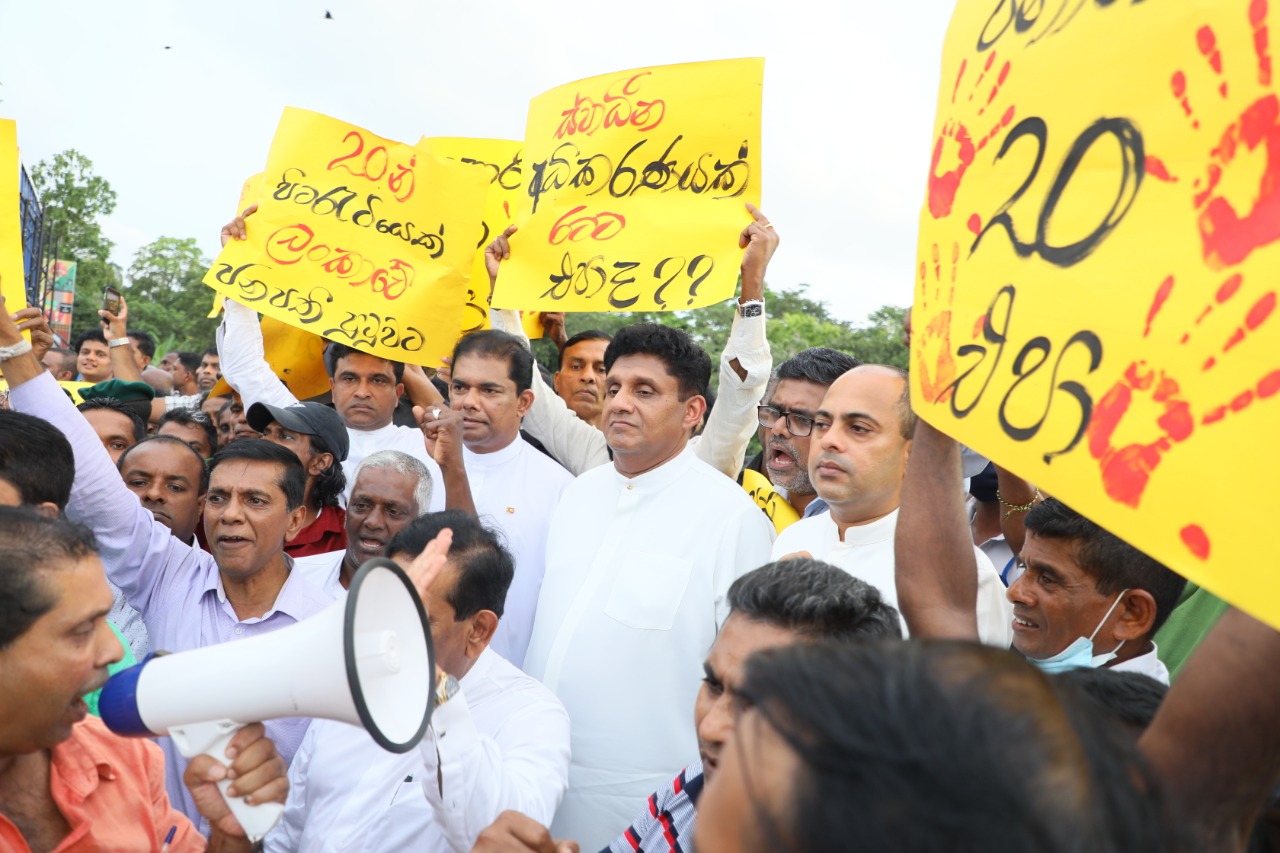 The 20th Amendment in historical perspective.

The 20th Amendment, I argue, is best understood in light of the 17th (2001), 18th (2010) and 19th (2015) Amendments. The country’s history of constitutional reform exposes how different governments and political parties have exploited representative democracy to consolidate political power. A historical perspective also allows citizens to appreciate both the impact of this amendment on accountability and their own role in strengthening and protecting constitutional governance in Sri Lanka. Unless Sri Lanka’s citizens reclaim representative democracy from political parties and its charismatic leaders, the rally of constitutional ping pong in Sri Lanka will, most likely, continue.

The 20th Amendment envisages a reversal of most reforms that were introduced by the 19th Amendment. Remaining intact is the right of access to information, the term limit on the presidency and the reduction of the terms of the presidency and of the parliament. The term limit on the presidency – which was removed by the 18th Amendment and reintroduced by the 19th Amendment – safeguards Sri Lanka from the danger of constitutionally mandated personal rule. In the absence of a term limit, the risk of the incumbent abusing his or her powers to be re-elected would be high. The right of access to information, or Article 14 (A), has been the only constitutional reform to expand the guarantee of fundamental rights under the Constitution of 1978. When read together with the Right to Information Act (2016), Article 14 (A) provides a legislative and institutional structure that ensures citizens have right of access to public information. Since it was established, the Right to Information Commission has allowed citizens to hold bearers of public office accountable for their decisions.

While these few reforms may remain intact, many reforms introduced by the 19th Amendment will not. In fact, the reforms proposed in the 20th Amendment, in addition to being problematic in and of themselves, will weaken the aspects of the 19th Amendment that survive. Taken as a whole, the proposed 20th Amendment will undermine the modest gains in the advancement of Sri Lanka’s constitutional democracy. The 20th Amendment proposes that a Parliamentary Council replace the Constitutional Council. It proposes the repeal of reforms introduced to the office of the prime minister under the 19th Amendment, and the repeal of the Audit Service Commission and the National Procurement Commission. The 20th Amendment reintroduces the option for the president to pass ‘urgent’ bills, except those that amend the Constitution. These are only a few of the democratic gains that will be reversed. It would also permit dual citizens to hold elected office and reverse the minimum qualifying age for election to the office of the president.

Independence and the Constitutional Council

In fact, the reforms proposed in the 20th Amendment, in addition to being problematic in and of themselves, will weaken the aspects of the 19th Amendment that survive. 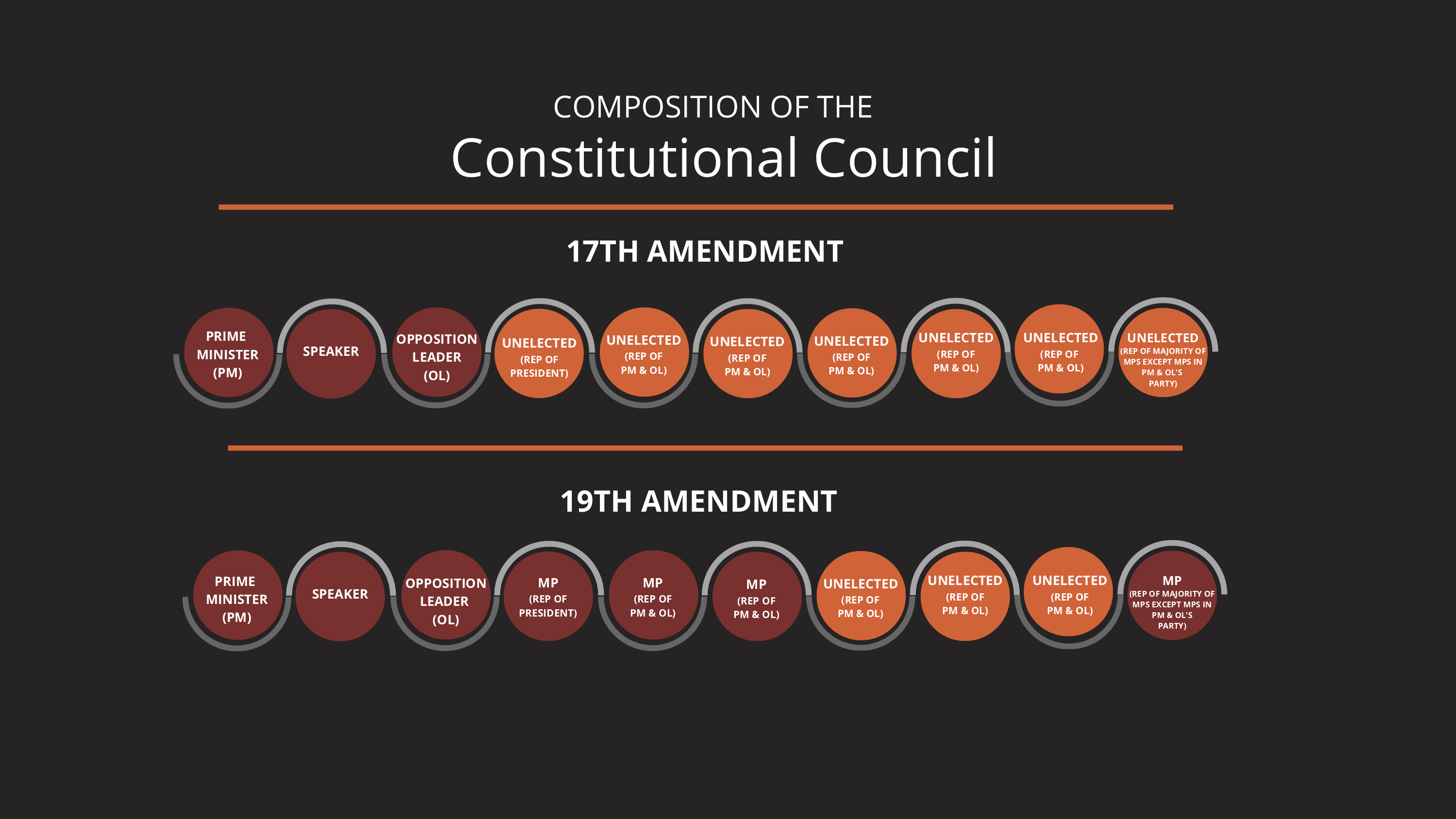 The electoral promise to abolish the executive presidency has been fashionable since the 1990s but to date has not been fulfilled.

Be that as it may, this is the context in which the 19th Amendment proposed the changes introduced to the office of the president and of the prime minister. While remaining within the broad category of a semi-presidential regime type, the reforms effectively changed Sri Lanka’s regime type from a president-parliamentary regime in which the president could remove the prime minister from office, to a premier-presidential regime in which the prime minister could only be removed by Parliament. The conduct of the bearers of those offices, particularly in the instance of the constitutional crisis and in the governance of national security, suggests that there was minimal appreciation for what the 19th Amendment sought to achieve in relation to their offices and with regard to the overall constitutional scheme of governance. In that context, the failures of implementation of the 19th Amendment created the political conditions that make the 20th Amendment a viable political option today. That is to say, a return to a president-parliamentary regime.

A more useful consideration, perhaps, is what the Constitutional Council is expected to be independent from?

A recent empirical study on regime types suggests that a semi-presidentialism in which the president is the most powerful office (a president-parliamentary regime) is the worst possible option in terms of democratic performance and government performance. The study claims that a parliamentary regime is the best possible option. Interestingly, it suggests that a semi-presidential system in which the president does not have the power to remove the prime minister (a premier-presidential regime) is either as effective as a parliamentary regime or even better. Democratic performance and government performance are evaluated in this study on the basis of several indicators, such as the Freedom House’s index of civil liberties, Transparency International’s Corruption Perceptions Index and the UNDP’s Human Development Index. Regardless of whether the general findings of this study apply in the Sri Lankan context, it is a helpful reminder of the types of questions that we ought to ask to evaluate the impact of the proposed 20th Amendment in terms of the overall scheme of governance.

In Sri Lanka, constitutional reforms that further constitutional governance have only come about when the political party or coalition in power has depended on the support of other parties to remain in power. The moment a political party has a two-thirds majority in Parliament within its reach, that government has preferred to strengthen the executive presidency. Even reforms that were progressive were made in the interest of consolidating political power. In this context, it is essential that citizens are clear about the ways in which constitutional ping-pong can impact accountability.

Above and beyond the immediate problems associated with the proposed 20th Amendment, recent developments in Sri Lanka remind me once again about the enduring alliances between state, party, family and corporate-wealth in our constitutional democracy. The formulation is present at any given moment in Sri Lanka’s history, albeit with variations. Each iteration has permitted varied forms and degrees of constitutional shamelessness. In ‘Killing a Constitution with a Thousand Cuts: Executive Aggrandizement and Party-State Fusion in India’, constitutional-law expert Tarun Khaitan argues that the discourse of hyper-nationalism, the discourse of welfare-development-populism, and the managerial discourse of probity, decisiveness and efficiency allow for constitutional democracy to be undermined in India. This argument extends to Sri Lanka.

It brings me back to the constitutional ping pong that we see in Sri Lanka today. Breaking up the rally requires that Sri Lanka’s polity recognise the risks that the 20th Amendment poses to our democracy. It requires us to call out the shamelessness with which political parties and their leaders exploit the Constitution to consolidate their political power. At this juncture, political parties taking different positions on the 20th Amendment ought to remember and recall their conduct in the past. They ought to confront the shamelessness with which they play constitutional ping pong with Sri Lanka’s constitutional democracy. Did their party support the establishment of the executive presidency? What was their position on the 17th, 18th and 19th amendments and why? How do they reconcile those views with their current views on the proposed 20th Amendment? If they changed their views across time, why did they do that?

It is incumbent upon Sri Lankan citizens to ensure that political actors, across the political divide, be held accountable to the principles of constitutional democracy under which they derive their political power and to the moral standards that they claim to respect.

Dinesha Samararatne is a law academic with an interest in public law in Sri Lanka, including constitutional law.