The void of Nagarjuna

At a time when Buddhist teachings were under threat from multiple directions, the 'second Buddha' did much to revive and build upon them. 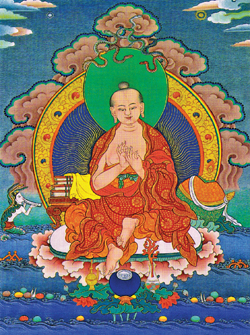 On a bus out of the coastal city of Vijayawada, in Andhra Pradesh, I passed small towns and villages whose names – opaque to me, as one who does not speak Telugu – I kept guessing at from a map. After years of drought, the monsoon had been bountiful, and we passed field after verdant field of cotton and pepper in an area infamous for its depleted water tables and crushing farmer debt. It took most of the morning, on three buses and an autorickshaw, to reach my destination: a village near the ruins of Nagarjunakonda.

A city flourished around 1800 years ago at Nagarjunakonda, the Hill of Nagarjuna. A great religious and education centre of both Hinduism and Buddhism, it was once part of the Satvahana Empire and then the capital of the Ikshvaku dynasty (AD 225-325), falling into terminal decline after the demise of the last Ikshvaku king. A schoolteacher, S Venkataramayya, discovered the ruins in 1926, though much of it now lies under one of the largest manmade lakes in the world, Nagarjuna Sagar, formed in 1960 by a massive dam across the Krishna River. Archaeological digs between 1926 and 1960 turned up finds from the early Stone Age to medieval times, spread over 130 sites across 24 sq km. Many structures were moved and reassembled on what is now an island in the lake, as well as on the lake’s eastern bank at Anupu.

The island’s modern name was inspired by one of its most illustrious citizens, Nagarjuna, a Buddhist monk-philosopher and founder of the ‘Middle Path’ school, who most likely lived there sometime during AD 150-250. Called by some ‘the second Buddha’, Nagarjuna’s work is indispensable to several Buddhist schools, particularly Mahayana. ‘Nagarjuna’s philosophy represents something of a watershed not only in the history of Indian philosophy but in the history of philosophy as a whole,’ says Douglas Berger, a scholar of Southasian thought, ‘as it calls into question certain philosophical assumptions so easily resorted to in our attempt to understand the world.’

Exploring shunyata
Not much is conclusively known about Nagarjuna’s life. Born into a Brahmin family, he later became a Buddhist. He likely spent many years at a centre of learning that later evolved into Nalanda University, in modern-day Bihar. Many scholars consider his exposition of the concept of shunyata (‘emptiness’) to be a critical achievement, central to a remarkable understanding of what it means to be human. He is best known for two Sanskrit works that have survived to this day, Madhyamika karika (Fundamental verses on the Middle Way) and Vigrahavyavartani (The end of disputes), which analyse the nature of reality, how we perceive it, and the basis of knowledge. His works should be thought of not only as a revival of the Buddha’s views on such topics – which, at the time, were losing ground to rival views within both Buddhism and Brahminism – but also as their further development.

The Middle Way in Nagarjuna’s philosophy refers to the idea that there is no objective reality accessible to us. This contrasts with the essentialist metaphysics of the self (atman) and reality (brahman) that was prominent in his day, which held that there is a true and universal reality that the human mind, with effort, can come to know. Nagarjuna argued instead that what we make of reality inevitably depends on the specific make-up of our mind, rather than on anything we can identify as an innate attribute of reality itself (svabhava). Thus, he suggested, there is no escape from our lived experience: we are limited by the interpretive knowledge of our mind, which gives us our world of appearances. When we realise this, it has profound implications for us. As our illusions fall away, we begin to regard ourselves as inextricably steeped in a reality that we shape and which in turn shapes us, rather than as beings able to detach ourselves to contemplate reality as it ‘truly’ is. Such a cognitive shift, according to the Buddha, is a prerequisite for inner peace and wisdom.

In shunyata, Nagarjuna’s real achievement was a rigorous analysis of phenomena in order to reveal the incoherence of the idea that things possess an ‘intrinsic’ nature – an eternal existence that does not depend on anything external. Nor is there a Self, with an unchanging, innate essence: instead, the Self is our own conceptual construct. Though the Buddha first articulated these views, by Nagarjuna’s time they were held with suspicion. Nagarjuna’s careful exposition of these views made them respectable again, and they soon became the bedrock of Mahayana Buddhism.

Nagarjuna rejected the idea of an ineffable reality outside our mind’s grasp. To Nagarjuna, says Jan Westerhoff, author of a book on the philosopher, ‘our conceptual framework is to be thought of not so much as a map of a country, but as a set of rules for a game’. As such, for instance, it is meaningless to speak of a gambit in a game of chess that cannot be described by the notations of that game. Our concepts too are part of the game we play to make sense of reality, and they give shape to and frame our understanding – we cannot access what lies beyond our own concepts.

Nagarjuna thus leads us to think of knowledge, and investigative procedures that result in knowledge, as existing within a context. There is no ‘ultimate truth’ about how things really are; rather, there is only conventional truth, one that exists within the context of commonly accepted practices and beliefs. That said, not every conventional truth is valid, Nagarjuna clarifies, and some can be judged better than others, based on humanity’s shared experience of that particular ‘truth’. For instance, when we claim that a fruit tastes more ‘acidic’ than another, we rely on conventional standards based on our shared sense of taste – there is no ‘ultimate truth’ of the fruit tasting acidic outside the human mind.

Nagarjuna’s views have found strong resonance in recent Western philosophy, particularly that of the Austrian philosopher Ludwig Wittgenstein. Nagarjuna revealed to us how we arrive at our most cherished beliefs, and why this understanding is conducive to humility. In our own world of secular and religious strife, his ideas emphasise the need to be always alert to context in our interaction with and judgment of others.

View across the water
Nagarjunakonda is now a popular daytrip from Hyderabad (Deccan). For most visitors, the highlights seem to be the scenic ferry ride across the lake to the island, where most picnic with family and friends under the shady tree on the lawns. The ruins of stupas, temples, monasteries, burial sites, a university and an amphitheatre make for a pleasant yet haunting excursion. There is even a spot where the founder of the Ikshvaku dynasty performed ashvamedha, a Vedic ritual horse sacrifice, usually commissioned by great kings. A bathing ghat on the lake, built in the style of the ancient city, makes for a fitting place to rest and imagine the city at its prime: its street life, homes, people. What was Nagarjuna like as a person, in the eyes of his family and friends? What kind of society and intellectual culture gave rise to a thinker like him? What was it like to sit in on doctrinal debates, where rival schools of thought waged intellectual battle with each other?

A museum on the island holds many exquisite sculptures, artefacts and archaeological data on the ancient city. It was perhaps during Nagarjuna’s time that the Buddha, over half a millennium after his death, was starting to be depicted anthropomorphically – the Buddha’s own opposition to turning him into an idol was being forgotten. Sculptures from this period show many facets of material life, including bas-reliefs depicting court scenes, devotees, voluptuous singers and dancers, women holding food and drinks, children at play, war scenes, tree nymphs and more. The uniquely eclectic Gandhara style is evident in many of the works, even this far south. Despite frenetic excavations before the dam’s inauguration in 1960, one has to wonder how much of the ancient city still lies submerged under water, perhaps lost to us forever. Either way, there has been little to no analysis of what might lay underwater. In this museum too, the Archaeological Survey of India, as is its custom, prohibits the photography of works excavated with taxpayer money and with no evident copyright claims. Why? Nobody has a good answer. ‘Orders from above’ is the most common. ‘Apply for a permit in Delhi,’ said the curator this time around. As per my own custom, I tried to sneak in a few photos, but an overzealous guard, sensing my intent, followed me around. I thought of offering him a bribe, but then got distracted by the question: In my place, what would Nagarjuna have done?

Namit Arora is a Delhi-based essayist, travel photographer, documentary filmmaker, and former Internet technologist. He is also the author of 'Indians: A Brief History of a Civilization'. (www.shunya.net)