How wedding videos have morphed over the years in urban India 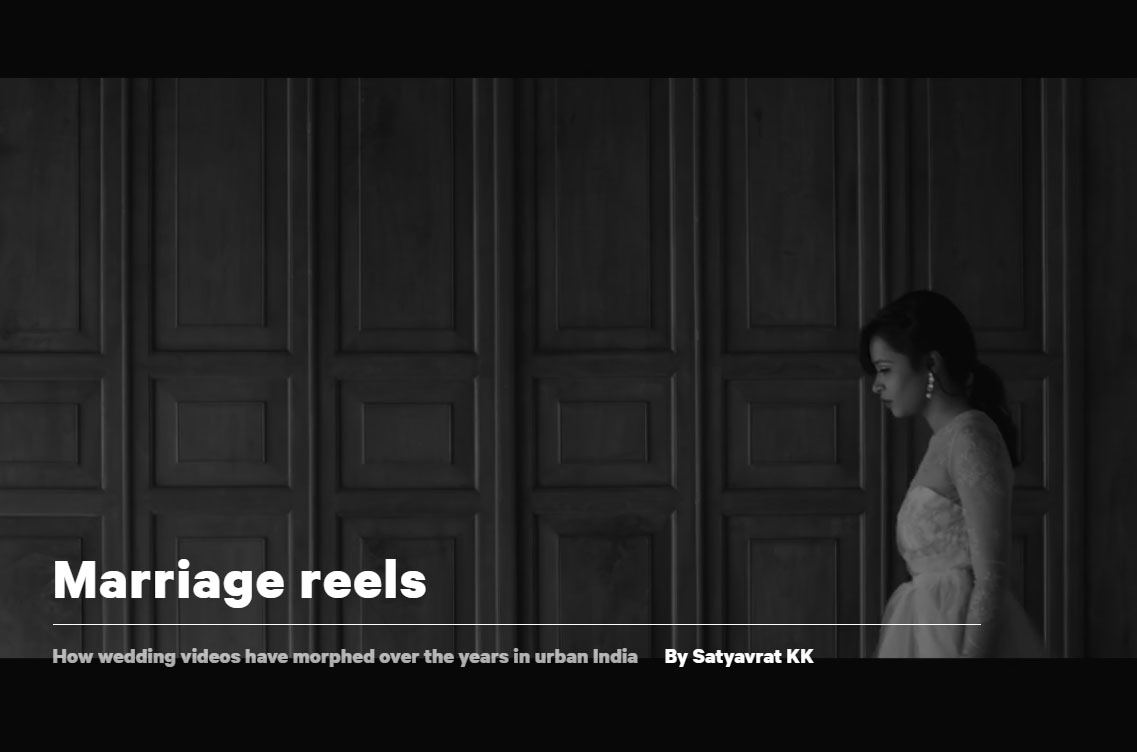 Marriage Reels (Still from The Wedding -Atul+Kanika, by Wedding Flicks)

I was around six years old when I saw my father in a suit for the first time. At home, he preferred to go bare-chested, wearing what can only be described as a loin cloth that aspired to be a lungi. But there he was that day, beaming from the screen of our Panasonic TV set as the video from his wedding day played. My parents had crammed quite a few watershed events into one video cassette recorder (VCR) tape: my ayush homam (a Hindu ritual that acknowledges an infant’s first gruelling year of existence), the birthday party of a cousin, and their wedding. Until then, I used to replay the tape only to revisit my infantile antics. But the lethargy induced by the abject dreariness of a Chennai summer resulted in me letting the tape trudge along its terribly edited course. Puzzled by all the faces that appeared on the screen, I made my mother explain who they were as I pointed at them.

Brought up in a nuclear family, I had no memory of playing cricket with my cousins and I had only a nodding acquaintance with my grandparents. Our-two bedroom apartment hardly saw any visiting relatives. Watching the video made me feel like a miniscule detail in a tapestry; in a good way, as it connected me to a much larger story. The sultry afternoon soon made way for a temperate evening as the stories poured out; of aunts who were musicians and doctors, of roving uncles who took off to Italy to try their luck in the textile export business and other more tepid stories of relations who didn’t do much at all. For the first time, I got an inkling of familial chaos. The video was revelatory, not just in itself, but because of the plethora of reminiscence it prompted for my mother. The barely edited, slow-paced video gave enough scope for a running commentary as background score. This was a unique experience for my six-year-old self as elders waxing eloquent about their halcyon romances was a rarity.

Watching the video made me feel like a miniscule detail in a tapestry; in a good way, as it connected me to a much larger story

One could say that this was one of the last specimens of wedding videos filmed on tape on electronic news gathering (ENG) cameras through the late 1970s to early 1990s. Looking back, I know that I would have much less patience with its lack of ‘modern’ aesthetics now. The double-takes of rituals for the camera left no room for spontaneity and the staid elevator music in the background did not help. And all of these were strung in a myopic narrative that limited itself to the rituals and the glitzy moments of the wedding. However, to be fair, one must acknowledge that the filming crew in those days had the additional trouble of being accoutered with heavy equipment like ENG cameras, lighting equipment and wires that snaked across the floor and tripped people. It was difficult for the typical ensemble of videographer, lights guy and helper boy to not be conspicuous. Moreover, capturing candid ‘real’ moments was difficult when the subject was being blinded by a 1000-watt spotlight.

Before the explosion of Video Home System (VHS) cameras in the 1990s, weddings were thus shot with such rudimentary professional recording devices. Being much lighter and unobtrusive, VHS cameras endowed wedding videographers with a sense of autonomy over the composition of the shots. Moreover, in less than a decade, digital technology became far cheaper. Now, one could buy digital camcorders that could be strapped to the hand and was easy to use.

“All the videos we made before portable camcorders heavily depended on post-production work,” says S Solomon, a former wedding videographer.

This explains the dizzying array of effects, like transitions, halos and flowers in the old videos.

“But after these camcorders came, we were allowed to try new things with the way we shot the videos. The basic template did not change, but we found that we could innovate within this framework.”

As digital handicams also became common in upper-middle-class households, members of the family also shot videos on D-day, side by side with professional videographers. These ‘family’ videos would later be edited on basic, free softwares such as Windows Movie Maker and shared among family and friends. Looking through some of these videos, one can sense the excitement and experimentation that a new toy unfailingly brings.

If I dare say it, a ‘new wave’ wedding video sensibility has developed with the increasing popularity of digital single-lens reflex camera (DSLR) camera over the last decade, facilitated by a growing disposable income among young upper-middle class Indians. While the DSLR has become commonplace, there seems to be a general consensus that various wedding filmmakers have left a distinct mark on the form. One of them is Vishal Punjabi, who made a film with the rather jejune title of Heartbeats in 2012. Punjabi, who has a company with the self-explanatory title ‘The Wedding Filmer’, is a producer who has also worked on Bollywood films such as Asoka, Don and Main Hoon Na. The film Heartbeat covered the wedding of his friend Devrath in a style that included slick sequences, talking heads, arthouse compositions, a cogent narrative and even an underwater sequence. It also made it to international film festivals as a documentary. Speaking on why ‘films’ like this get so much attention, Harish Ramaswamy, a former wedding planner says, “Traditionally, wedding videos have always been considered long and boring. With cameramen recording every minute of the wedding, it gets really dreary. As ‘candid photography’ gained popularity, ‘candid videos’ soon started trending in the wedding industry. Usually, these videos are just under 10 minutes and thus more ‘shareable’.”

Distinctive artistic outlooks have emerged since the late-2000s to grapple with the form. Mario Jerome of the Wedding Flicks, a wedding videography company, says, “We specialise in short version edits, which we refer to as ‘highlight films’. We do not undertake long version edits but we hand over all the unedited (RAW) footage we shoot.”

In the beginning of a video titled ‘Atul+Kanika: Lip Dub’ we see a couple innocuously walking from the threshold of a villa to the beat of the tambourine introduction of the song ‘Are You Gonna Be My Girl’ by the Australian band Jet. Soon after, we see them surrounded by a group of people who also catch the rhythm of the beat. After the opening guitar lick, a perfectly choreographed jamboree ensues, with all the members mouthing the words of the song as they indulge in antics like diving into swimming pools, clapping in unison and dancing around the premises, all in a single, breathless take (the first one-take lip dub video in India). While the lip dub phenomenon is a foreign import, it seems to fit in perfectly with the Bollywood culture in India, evoking the hedonism of its song-and-dance routines that are often shot amidst exotic environs. In some of their more desi offerings, we see wedding guests, including older men and women, lip dubbing to hit songs such as ‘Radha’ and ‘London Thumakda’.

Varun Vasudevan, one of the founders of the company Madras Wedding Photography Company, says they exercise complete creative control over the videos they shoot.

“There’s a process of curation that did not exist before. And there are some, like us, who try to make the wedding video as real as possible, in the sense of approaching it like an actual film that has a strong narrative. We don’t want to do a highlights reel, that’s what photographs are for,” Vasudevan says.

The hubbub of a typical Indian wedding can be a rather testing place to maintain aesthetic codes but Vasudevan’s method is rather straightforward: anticipate where one needs to be at any given time, knowing where the important people are, and being aware of where each person in the crew is. Very often, filmmakers work in small crews, and try to remain as discreet as possible.

“Though we are a four-member team, we blend in with the crowd”, says Jerome. But the shadow of the ‘traditional’ video and videographer does not seem to have disappeared altogether.

Very often, filmmakers work in small crews, and try to remain as discreet as possible.

“Sometimes people hire two parties to film the wedding. Senior members of the family might not buy the idea of a five-minute video and that’s why they hire a conventional film crew as well,” Jerome adds.

But is the form commercially viable for a filmmaker in the current scenario?

“I’d like to say it is, but it’s difficult. There’s still a gap between how much it costs us to run a company and how much the market is willing to pay,” says Vasudevan.

Another crucial factor that videographers have to consider is the dry spells during the months ‘unsuitable’ for Hindu weddings.

“Business is seasonal when it comes to weddings. There are months where there are back to back weddings, and months when there is nothing. That’s why we only plan to do a limited number of weddings a year,” says Jerome.

When it comes to old videos, relegating them to the status of relics would be unfair as wedding videos have the capacity to take on an entirely novel purpose, meaning and value with every passing generation. My mother winces at the idea of giving her wedding video another watch, but, to me it represents an extremely fascinating genealogical object.

Since VCR players are no longer in currency, people have taken to digitising these old videos. If an analogue tape has not fallen prey to humidity and fungus, one can find various ways to resuscitate them to a digital version. Apart from websites that guide one through the conversion, there are also niche shops which are equipped to convert VCR tapes to DVDs. Case in point is Paul Raj, a photo studio owner in Bangalore.

“Prices vary according to length of the video, but we still do digital restoration because there is still a big demand for it,” he says. Converting a full-length VHS tape usually costs around INR 600, he adds.

So, what ultimately drive us to restore these videos? To me, it boils down to the memories captured in these videos that keep me coming back to these nostalgic frames on lazy afternoons.

~Satyavrat KK is a writer based in Bangalore