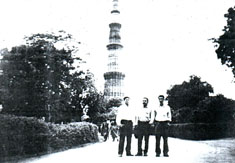 The curtain has finally come down on one of the murkiest episodes of Indian intelligence, after 34 Burmese rebels, long held in Calcutta’s Presidency Jail, reached a ‘plea bargain’ settlement with their prosecution in early July. The agreement, which was approved by the city sessions court in Calcutta, will now lead to the dropping of all the charges against the rebels except those relating to the violation of the Foreigners Act. But when Judge Uday Chandra Nag sentenced the 34 rebels to three and a half years of imprisonment and a fine of INR 6000 each for violating the Foreigners Act, it was obvious the rebels would have to be released immediately – they had, after all, already been in Indian jails for 12 years.

‘So after we pay the fine, we can get out,’ said Thein Oung Gyaw, one of the rebels. But now we don’t have any money, so we look toward the Burmese community in India to pay for our release. After all, they have borne the huge legal expenses.’ In fact, the actual release of the 34 rebels might be delayed even after they pay their fines, because the authorities in Calcutta are yet to finalise the modalities for their discharge. ‘We are seeking legal advice to finalise that,’ said B D Sharma, the inspector-general in charge of prisons in Calcutta.

Ten of the rebels are from the Karen National Union (KNU) and the remaining 24 are from the National Unity Party of Arakan (NUPA), both fighting for separate homelands in Burma for the Karen and the Arakanese people respectively. Back in February 1998, they allege that they were lured to the Andaman Islands by an Indian military-intelligence officer, Lieutenant-Colonel Biswajit Singh Grewal, who is said to have offered them a safe haven for pursuing their fight against the military junta in Burma. But when the rebels arrived in two ships, six of their leaders were purportedly shot dead by the Indian Army; the rest have since been detained on charges of gun-running.

NUPA Chairman Khin Maung told this writer that his group had received support from India’s external-intelligence agency, the Research & Analysis Wing (RAW), and later from military intelligence. ‘We came into contact with the RAW in the early 1990s,’ he said. ‘Later, we were asked to deal with the military intelligence. We were used to spy on Chinese naval activity on the Arakan coast that worries India, and also look out for Northeast Indian rebels who have bases in Burma.’

Indian military-intelligence officials admit that the NUPA’s cooperation was essential for one of the Indian Army’s most successful counter-insurgency operations. In April 1995, a shipload of weapons landed at the Wyakaung beach on the Bangladesh-Burma border. Four rebel groups based in the Indian Northeast are said to have picked up the weapons, and several hundred fighters then lugged them back through the Chittagong Hill Tracts and Mizoram. The NUPA guerrillas followed the whole operation, providing details to Indian military intelligence, on the basis of which India’s eastern army command initiated Operation Golden Bird. The rebel column was twice intercepted by Indian troops, during which 38 rebels were killed and 118 caught, including the ‘foreign secretary’ of the United Liberation Front of Asom (ULFA), Sashadhar Choudhury.

However, the relationship between the Indian security forces and the Burmese fighters changed as soon as New Delhi started to improve its relations with the Burmese junta in the late 1990s. Indian military officials would frequently interact with their Burmese counterparts – among them, Colonel Grewal. ‘It was during this time [Grewal] worked out a deal with the Burmese army and started working for them,’ an Indian military-intelligence official who knew Grewal well said, on condition of anonymity. ‘This is why he tricked the NUPA into sending their rebels to Andamans, where the leaders were killed and the rest put in jail.’

Pleas and bargains
Colonel Grewal left the Indian Army immediately after the incident, and is said to have settled in Burma. There, he reportedly owns a cycle-parts factory, set up with the USD 1.5 million he is believed to have received from Burmese military intelligence. His family, however, has continued to live in Mohali, in Punjab state. India’s Central Bureau of Investigation (CBI) took seven years to draw up formal charges against the rebels, though in 2005 these individuals were shifted to detention in Calcutta from the Andamans after one of India’s leading human-rights lawyers, Nandita Haksar, moved the Supreme Court asking for a speedy trial (see Himal June 2009, ‘Intrigue and backstabbing on the high seas’).

Even thereafter, however, the case dragged on for the last five years, with the Indian military dragging its feet and not responding to repeated summonses. A few military officers did finally appear before the court to present their versions of what had taken place, but this was not enough for the prosecution to prove its case. In fact, the CBI failed to produce any of the top witnesses for cross-examination, including Colonel Grewal. In addition, many of the material exhibits, including the weapons seized from the rebels, could not be produced in court. ‘They knew none of their charges against the rebels will stick,’ said Burmese journalist Soe Myint, who was organising the rebels’ legal defence. ‘We knew we cannot fight on endlessly because the CBI might delay the case further by appealing to higher courts. We have no funds left to fight this case, because we have already spent the three million Indian rupees we had collected from the Burmese overseas community. So, we accept the plea bargain to secure the release of the rebels.’

‘Plea bargain’ is a Western legal concept that helps two contesting parties to settle a court case after it has reached a stalemate. ‘This is beneficial to both parties, the rebels and the CBI,’ says trial lawyer Akshay Sharma. ‘There are grey areas in this case, and the CBI has failed to produce the key witness, Colonel Grewal, who was the initial point of contact of the rebels and on whose orders they were apparently arrested in the Andamans.’ As a result of the approval of the plea bargain by the Calcutta court, the charges against the 34 rebels have now been dropped and the case formally stands closed.

Burmese pro-democracy activists welcomed the agreement, and are now demanding that the 34 rebels be immediately released from the Calcutta jail. ‘Senior leaders of the Burmese exile government in Delhi have told the Calcutta court that they will shelter these 34 rebels with the Burmese community in Delhi until such time the UNHCR issues them necessary travel documents for safe passage to a third country,’ said Soe Myint. NUPA Chairman Khin Maung further told this writer that East Timor has agreed to provide political asylum to these 34 rebels. ‘But until such time that the [UN’s refugee agency] in Delhi prepares their travel papers, they will have to stay in India,’ he said.

The late B B Nandi, one of India’s greatest spymasters and a former RAW deputy chief , started the process of Indian engagement with Burmese rebels by forging a deal with the Kachin Independence Organisation (KIO), which controls a huge strategic border region in North Burma. The Kachin state is squeezed between India and China, and during the 1960s and 1970s, several batches of Naga and Mizo rebels from the Indian Northeast used the Kachin corridor to reach China for military training. Later, in the 1980s, when China put an end to this assistance, the KIO’s military wing took up these training responsibilities. Journalist Subir Bhaumik, in his recent book The Troubled Periphery: Crisis of India’s Northeast, writes that by winning over the Kachin, Chin and Arakanese, the Indian intelligence ‘sanitised’ the country’s borders with Burma, putting to a stop to any threat to India’s security from originating in the area.

According to Nandi, a former RAW deputy chief, India’s security interests were well served by the covert links with the Burmese rebel groups. In fact, he argued that the junta has taken New Delhi officials for a ride, by not moving decisively against Indian rebels based in Burma. Soe Myint says that Nandi was even prepared to appear in court in Calcutta to defend the 34 Burmese rebels, eventually issuing a statement that the NUPA has been a friend of India – and that he had personal knowledge of this, because he had been the first Indian official to cultivate them. Interestingly, Nandi was less bothered about the implications on human rights and more about India’s security; his greatest fears were that after Colonel Grewal’s betrayal of the NUPA, ‘nobody would work for India in this region.’

~ Sarbari Bhaumik is a freelance journalist in Kolkata.