Time may be the most important ingredient in creating a good meal. 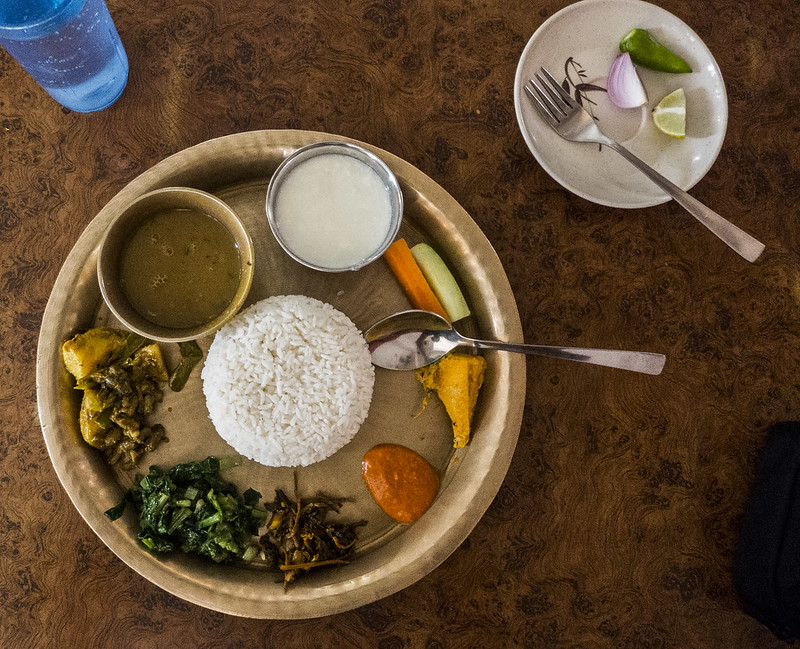 I could not get the strong smell of aloo and chamsoorko ras out of my mind. This stew of potatoes and a sharp, slightly pungent green was all I wanted to eat and nothing more. I was not able to, though, and thankfully my daughter grew up just fine, and does not drool all over the place. If a pregnant woman does not get to eat the food she craves, so the Nepali saying goes, the child will drool. But I was in New York in the 1980s, and chamsoor proved far too difficult to find. So I delivered my baby girl without having satiated the craving for so simple a dish.

Does one live to eat, or eat to live? I guess in a country – indeed, a region – like ours, where so many must toil day in and day out just to be able to get by, the question may seem moot. But certain simple staples can be a culinary pleasure: these are the dishes that drive a powerful nostalgia when overseas, and that one does not tire of eating every day. Cuisine is varied according to community in Kathmandu, and Newari cuisine is obviously the most authentically ‘Nepali’, but for many of the valley’s families, the menu for such a meal would read along the lines of: kalo daal (black lentils), bhuja (rice), kauli aloo (a dish of cauliflower and potatoes), saag (greens), tama aloo bodiko ras (a stew of bamboo shoots, potatoes and black-eyed peas), and golbhedako achar (tomato chutney). As the cherry on the top, one can drizzle a generous spoonful of ghiu (ghee) over the pile of rice. Of course, this thaali can be varied by substituting the tomato achar with potato alooko achar, but the kalo daal cannot be changed!

Kalo daal is maas daal that has been cooked over slow heat in a deep iron pan – the long-term leeching of the iron is what makes the lentil black. This is probably one of the few dishes in the world that is decidedly black, and not from being burnt. A well-used pan is often thinned out at the bottom and will eventually develop a hole, the family having been fortified by the iron. These days the busy householder cooks the daal first in a pressure cooker, and then pours it into the iron pot to allow it to turn its satisfying dark colour. Mixing in dried chives that have been fried in a ladleful of ghiu is another indispensable step.

The golbhedako achar has to achieve the right colour and texture. Ginger and garlic contribute the main flavours, along with salt, chilly pepper and Szechwan Pepper. In the old days, the tomato went through muslin cloth, but these days it can go through the food processor.

Kauli aloo may seem a simple dish to the diner who does not cook, but its preparation takes care. To get the right combination of tough and seasoned potato and cauliflower that is soft but not disintegrating, the two have to be cooked separately. Or, at the very least, the aloo must be cooked beforehand, and the kauli added to it. It is best to add only ginger (no garlic, onion or tomato) to the spices that go into this item, and a generous amount of coriander leaves should be sprinkled just before serving.

The aloo tama bodi dish is quintessentially Nepali. It takes a lot of tomatoes, which give it its great colour. The bamboo shoot is fried separately, and then added to the dish once everything else is cooked. Again, this item takes no onions. A meal containing aloo tama bodi needs to be planned ahead of time, as the black-eyed peas need to be soaked overnight. In cases of emergency, a pressure cooker will do the trick, of course, but the taste is not the same.

If a rice cooker is used, it is turned on half an hour before the meal is to be served. With the power cuts these days we have sometimes had to cook our rice in the pressure cooker, and the taste has been surprisingly good.

The ‘cultured’ way to eat with your hand is to eat with your fingers, and preferably the tips of the fingers, using the thumb to prompt in the food that the five fingers have so caringly shaped into a perfect morsel. It should take several moments to get the next bite ready, and only chewing slowly allows a person to take maximum pleasure from the food. Of course, some people will eat with food all over their palms, and gulp it down as if there were no next meal, but this is not the sign of a good eater.

The meal described above is complete in itself, but some people are not satisfied unless there is meat. A common non-vegetarian addition would be a dish of chicken or mutton. The chicken for this set should come with a thick gravy, made with lots of tomato and some onion. Ginger and garlic are also needed. The masala (consisting of cumin, coriander and a host of other spices) was traditionally made at home, allowing for variation from household to household, but now commercial preparations are preferred by most people.

Connoisseurs will grind their own spices to specification. These sorts also will not consider the broiler chicken (the caged variety that is locally known as syankhine, or bikase kukhura – ‘development chicken’ – whose origins lie in the 1960s introduction of ‘improved’, mass-bred varieties), and would rather go for free-roaming fowl that have developed tight muscles and pecked at a variety of different foods. However, free-range syankhine chickens are getting to be a luxury these days, even as chicken has dropped from being regarded as a delicacy to being common fare.

The other and traditional carnivorous alternative – in an upright Bahun household, at least – is of course goat meat, or khasiko masu. Mutton is usually prepared in the same way as chicken, but during Dasain – the 10-day festival that usually falls right after the monsoon – mutton gets a completely different treatment. The kebab that is prepared over long hours is definitely something to write home about.

Experts separate different cuts of the Dasain goat for different preparations. King kebab gets the best cuts. As a household cooking for Dasain will usually be dealing with 6-8 kilos of kebab, this meat gets a very special treatment. The masala (garam masala, prepared as per family custom) has been freshly ground in the preceding week. Some ginger has been sliced and some ground. Garlic is peeled and crushed. Buttermilk or yogurt is added to the meat, and in some cases even a squeeze of lime juice. Next comes mustard oil, fresh from the traditional oil presser of Khokana town, and a small teaspoon of ghiu finds itself atop a huge pile of meat. Salt to taste, and some turmeric. One onion (according to my mother) must be chopped and thrown in, and the whole thing marinated – not set to marinade, mind you, but mixed by hand for 20-30 minutes before it is allowed to sit for a while. Salt must now be added if still needed, and of course chilly pepper.

Once enough fuss has been made over the meat and it is ready to be cooked, oil is heated in a deep pan with a thick bottom – earlier this was done in rounded pots called kasaudi, which would sit over a wood-burning stove. Then several bay leaves are thrown into the oil before putting in the meat, fistful by fistful, never by pouring. The meat is then cooked over a slow heat for at least four hours. Well-cooked kebabs would keep for weeks into the upcoming winter in pre-refrigeration days. The slices of ginger, which become dark brown and indistinguishable from the meat, are as much a delicacy as the meat itself.

Chiura (beaten rice) and kebab is a staple combination during the festival season, and especially good with a pickle of ripened cucumber. The sour cucumber pickle, slightly gelatinous but crunchy on the rind, is a perfect digestive for the protein-laden Dasain diet.

The dessert for this menu is sikarni (called shrikhand in parts of India), prepared by hanging yogurt in muslin – this task has not yet been perfected for the food processor. After most of the water has dripped out, the yogurt becomes doubly concentrated. Sikarni’s creamy texture is achieved by then squeezing the yogurt through the muslin. Sugar and cardamom create the basic flavouring, but people often add saffron and dried fruits to make the dessert more attractive.

A good meal is not over until the host offers a selection of dried fruits and spices. Beetle-nut for some people, but not for me!