Review of an apolitical biopic on Aung San Suu Kyi. 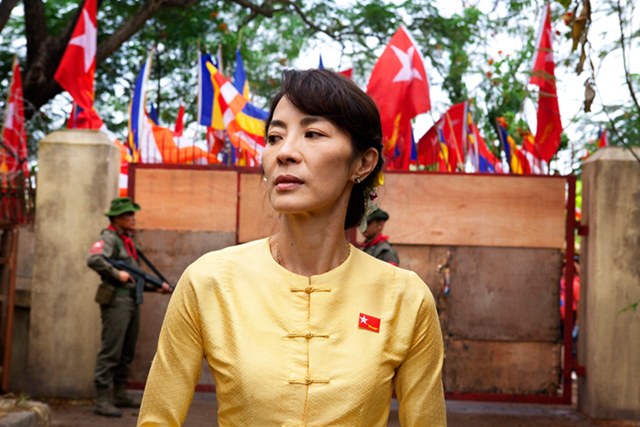 It all starts with a sizzle of excitement. A crowd draws near, and at its centre stands an elegant, frail woman. By the time she is on stage, however, she has become a powerful speaker, deftly deflecting questions, holding the expectant audience rapt. A thousand clichés are created, and a modern-day fairytale is born from the bosom of Hollywood. The result is director Luc Besson’s The Lady.

That the film is, strictly, neither biopic nor political says a lot about the appeal of Aung San Suu Kyi, the film’s protagonist. The Lady is primarily a tale of personal sacrifice – a quintessential ingredient in the creation of many a ‘saint’, from Buddha to Saint Francis of Assisi to Mohandas K Gandhi. The film stars the Malaysian actress (and former Bond girl) Michelle Yeoh, who spent time with Suu Kyi in the immediate aftermath of her release from house arrest in November 2010. At certain moments, Yeoh’s preparation shines through, as she brings a few of Suu Kyi’s mannerisms to the screen; but in truth, Yeoh never meets the challenge of depicting the Nobel laureate’s humanity. Portraying the journey from housewife to living messiah is, perhaps, too great a task.

Suu Kyi is often compared to Gandhi, not least because she derives her political methods largely from the Independence hero. Their respective Hollywood eulogies also merit comparison. Richard Attenborough’s Oscar-winning 1982 film Gandhi attempts to shape a political narrative from Gandhi’s formational years through to his assassination. Not, however, without an opening proviso: ‘No man’s life can be encompassed in one telling. There is no way to give each year its allotted weight, to include each event, each person who helped to shape a lifetime.’ Nonetheless, even that lauded film had historians and scholars scoffing at its oversimplifications; The Lady will have them doing more of the same.

Too early to tell
Given the circumstances of Suu Kyi’s life, it is not surprising that the film is rather apolitical. The vast majority of the opposition leader’s political career has been spent under house arrest – hardly the most cinematically compelling setting – amidst Burma’s games of convoluted realpolitik. Further, Suu Kyi’s political tale is also far from over, of course, as she is currently campaigning for election to Burma’s Parliament. For better or worse, the political dimension of Suu Kyi’s ascent is portrayed weakly at best, though it is a tantalising history.

Instead, The Lady centres on the best-known twist of fate in a life full of tragedy: Suu Kyi’s return from the comforts of married life in the UK to care for her ailing mother, only to be hoisted into the leadership of a nascent democracy campaign. This while her supportive husband, Professor Michael Aris, played by David Thewlis, gets cancer and dies, having not seen her for two years. The ways in which Suu Kyi responded to her new role, however, are largely left aside. In the film, her house suddenly becomes a hub of political activity, and she is repeatedly approached by nameless academics, most of which have in reality suffered tremendously. The tales of these individuals are equally compelling, their struggles as admirable. Win Tin, for instance, spent 19 years in jail, and was placed in a dog kennel for stretches of up to seven months as punishment for sending a letter critical of the regime to the UN. Yet in The Lady, such ‘characters’ remain unrecognised, anonymous.

With the isolation that still blankets Burma, it could be that Besson has jumped the gun in making this film, or even that it is a project that no one could bring to the screen satisfactorily. No filming was allowed in Burma itself, nor has the film been officially distributed in the country. Such conditions necessitated ingenuity on the part of the filmmakers, as when portraying Suu Kyi’s famous 26 August 1988 speech in front of the Shwedagon pagoda – a hugely significant event where Suu Kyi addressed half a million people, and which focused permanent global attention on her. In the film, the scene weaves footage of a crowd scene together with shots of the Shwedagon pagoda, but that the two were not filmed together remains clear. The recreation of Suu Kyi’s lakeside house at 54 University Avenue, in Rangoon, however, is impressive, and here director Luc Besson apparently spared no effort on detail.

According to Virginie Besson Silla, one of the film’s producers, even filming in neighbouring Thailand proved controversial, since Thai authorities did not want to offend their counterparts in Burma. The film also uses Burmese exiles living in Thailand, who, ironically, play the very men who exiled them. As a result of such compromises, some scenes remain implausible to those who know Burma well; but this is a practical necessity given Burma’s sensitivity, even as the country opens up, let alone over the last few years when the film was in production. Nonetheless, the film has made its mark on the illegal DVD market on the streets of Rangoon. This is perhaps telling of Burma’s ongoing transformation – not long ago, one would be have been hard-pressed in Burmese markets to find even an image of the Lady, as Suu Kyi is affectionately known to her supporters.

More than cliché
Aung San Suu Kyi was born just at the end of the Second World War, a conflict that would see her father, General Aung San, capitalise on the Japanese invasion of the British colony to gain Burmese independence. Aung San’s life was as incredible as it was short, but an obstinate determination seems to have passed from father to daughter. Six months before Burma gained full-fledged independence, Aung San was gunned down in his office, in a scene rendered somewhat inaccurately on the screen. Incredibly, having already fought both for the Japanese and against them, he was only 32 when he died. In the brief period after the war, Aung San had manoeuvred to force British imperial power out of Burma as soon as possible. This happened without any transitional assistance in the formation of institutions of governance or a functioning economy. The issue of who killed him remains a mystery to this day, though some allege that it was the British, since both Winston Churchill and Franklin D Roosevelt were known to have loathed him. In any case, the doubt surrounding this integral incident gives some indication of the complexity of the historical and political issues with which The Lady has been forced to grapple.

Yet even in dealing with events where the facts are far clearer, the film falls short. Take for example the so-called Depayin massacre, which led to Suu Kyi’s last spell under house arrest. In May 2003, while touring the country, her convoy was set upon by a mob widely believed to have been made up of members of the Burmese military’s civilian wing, the Union Solidarity Development Association. In 2010, this same group became a political party and ‘won’ the pantomime election that year which brought to power the current president, Thein Sein. The drama and brutality of the Depayin massacre could really bring a film to life. Dozens of Suu Kyi’s supporters were killed, and her life was only saved by the ingenuity of a young lawyer named Kyaw Soe Lin, who drove her through the mayhem to the nearest town. There they were both arrested, and Soe Lin was tortured for the ‘crime’ of being attacked. Yet in the film, Besson chooses to stick with the clichéd image of Suu Kyi walking towards the rifles of Burmese soldiers.

The film also struggles to create compelling portraits of the protagonist and the characters surrounding her. While Besson has a solid track record of bringing strong female characters to the screen, here he fails to portray the dualism of empowered femininity, which could have added another dimension to the Suu Kyi character. The audience’s understanding of what Suu Kyi stands for hinges largely on what she is against, yet we see little of Burma’s mystifying junta. While the film does portray the ruling regime’s vindictive attempts to isolate Suu Kyi – especially by preventing her from seeing her husband – there is no concerted attempt at portraying the megalomania, insecurity and cruelty of the rulers responsible for so much of this tragic tale. Even the portrayal of Suu Kyi’s family – notwithstanding a decent performance from Thewlis as her husband – is at times implausible, not least because of faint stubble on the face of her young son while he is still meant to be a school boy. On the screen, this adds to a sense of incompatibility between Suu Kyi, her family and the world in which they find themselves.

The Lady is a valiant effort at chronicling one of the iconic struggles of our age. Like many of the best stories, however, the limits of cinema are unable to do it justice. Perhaps it has also come too soon. The real ending to this tale is surely still being written by the hundreds of thousands of Burmese who are turning out to see the real Lady campaigning, in the flesh – as enigmatic and determined as ever even after decades of struggle.

Joseph Allchin is a writer and journalist who has spent many years writing about and living in the greater Bay of Bengal region. His critically acclaimed first book, 'Many Rivers One Sea', looks at the politics of extremism in Bangladesh and is out now.