A novel of thresholds

‘Basanti’ and writing the New Woman in Odia literary culture 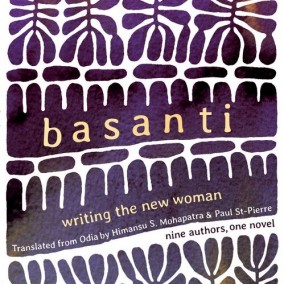 Fuelled by the nationalist movement in India, collaboration and team work emerged as the new zeitgeist of literature in the 1920s. The charged climate of the decade made writers conscious of the political nature of art. As writers explored ways – often jointly – in which given cultural thresholds could be crossed, several existing ideas about literary production were questioned, chief among which was the idea of individual ownership of a literary work. An experimental enterprise of ‘collaborative writing’ caught the fancy of young writers from both Bengal and Odisha around this point of time in history. The period witnessed a string of collaborative novels like Baroyari (12 authors), Bhager Puja (16 authors) and Chatuskona (4 authors), which initiated a new artistic practice of collective imagining in Bangla literature. However, Odia writers of the time carried the experiment of collaborative writing further. In Basanti (1931), written by nine young Odia authors, two progressive currents, of collective composition and an agenda of reform, were made operative within a single narrative.

Literary experimentation in the 1920s was bound up with serial publication in journals. Journals such as Utkala Dipika (1866) and Utkala Sahitya (1897) provided a platform for Odia writers and were instrumental in bringing about a “Renaissance of Odia letters”, as is stated in the introduction to the English translation of Basanti. It was in Utkala Sahitya that Fakir Mohan Senapati’s masterpiece of social realism and satire Chha Mana Atha Guntha (Six Acres and a Third) was serialised from 1897 to 1899, before being published as a book in 1902. The same goes for the proto-feminist Basanti, which was first serialised in monthly installments in Utkala Sahitya between May 1924 and November 1926.

For modern readers, however, Basanti’s publication history can appear to be both interesting and baffling. Published in book form in 1931, Basanti sank into oblivion and was resurrected almost 40 years later in 1968. But then it went out of print again and continued to remain in that state to date. Now, over 50 years since its most recent publication and over 90 years since the original serial ended, it has returned again but in a new form and in a new language. Basanti’s publication history invariably brings to mind G V Desani’s 1948 novel All About H. Hatterr, which had a similarly checkered career. Now considered to be an important precursor of postcolonial writing, for its comic bending of grammatical rules and pushing the frontiers of the English language, Hatterr too went underground immediately after publication and resurfaced 21 years later in 1969, with an introduction by Anthony Burgess. The book, although available now, remains a kind of coterie classic in Indian literary circles.

Basanti was not written for a coterie audience; social reform was at the heart of this collaborative novel. It scores on two unprecedented fronts in Odia fiction. Firstly, it was the product of a collective attempt of nine authors, six men and three women: Baishnab Charan Das, Prativa Devi, Sarala Devi, Suprava Devi, Muralidhar Mahanti, Harihar Mahapatra, Sarat Chandra Mukherjee, Kalindi Charan Panigrahi and Annada Shankar Ray. These young authors belonged to the ‘Sabuja age’ (literally the Greens, but harking back to Romanticism), who dared to break away from the popular trend of garrulous and sentimental narrators in Odia fiction to a literary practice of depicting strong, ideologically driven, modern characters. This shift in the source of narrative momentum enabled the collaborators to enter into a serious narrative inquiry of the ‘woman question’ and debates over the formal status of women and their roles in a society divided along caste and gender lines.

Basanti and the ‘New Woman’

Basanti tells the story of the eponymous heroine who is educated, intelligent and feels passionately about the emancipation of women from stifling social conventions. She falls in love with a rich, idealistic young man, Debabrata, who, at the opening of the novel is introduced as someone who professes concern for the cause of women. After their marriage, the couple relocates from Cuttack, the intellectual epicenter of Odisha, to Debabrata’s village in Balasore. What follows is Basanti’s immersion – much against her will – in domestic chores from dawn to dusk. She is, however, able to keep her intellectual and activist flame alive through reading, writing and setting up a school for girls, much to the chagrin of her mother-in-law and the village folk and, it turns out, her husband as well. Unable to reconcile himself with his wife’s opposition to the gender disparity prevalent around them, and fearful that it might harm their conjugal life, Debabrata turns hostile towards Basanti. To make matters worse, he even accuses Basanti of infidelity and turns her out of the house late one night.  Debabrata, however, realises his mistake and the novel ends with their reunion. This is where the novel changes track to deliver itself into the conventions of traditional domestic fiction. Debabrata has a change of heart, much like Ramachandra did in the Ramayana after sending Sita into exile. And so does Basanti, who finds herself responsible for having “distanced herself so easily from her old sentimental ‘Deba bhai’”. Both Debabrata and Basanti return to their initial portrayals as lovers eager to unite and taste the bliss of domesticity. The novel settles for an easy resolution of the questions it had raised against patriarchy.

To name these drawbacks is not to question Basanti’s status as a proto-feminist text in Odia literature. The writers of Basanti envisioned the Odia ‘New Woman’ to be essentially educated, intelligent and articulate, with a proclivity for the ‘life of the mind’. What stands out in the novel is the depiction of an active, enlightened female consciousness far ahead of its place and time. The novel, presented in 30 chapters, appears up to chapter 13 to be a traditional tale revolving around love, marriage and marital tension. A new kind of novel, underwritten by a feminist ideal, emerges from chapter 14 onward. From that point, until chapter 22, the novel uses new formal devices such as diary entries and debates to subject the normative male viewpoint to the sharpest scrutiny. This is evident, for example, in chapters 14 and 19, written by Muralidhar Mahanti and Sarala Devi respectively, where a male writer and a female writer grapple with the ‘woman question’ through a series of well-orchestrated polemics.

In chapter 14, Debabrata discovers Basanti’s essay ‘The Place of Women in the World’ published in an Odia monthly, Nababani. In the essay, Basanti boldly argues for a “place for women outside the world of men. Unless there is, women’s lives will not be full . . . Everyone believes women do not have an independent status. Women have to break this myth. Only then can they emerge in their full glory.” Debabrata finds Basanti’s arguments for autonomy extremely radical, ill-founded and against the institution of marriage and the ‘noble design of God’. For the first time, a wedge is seen to be driven between what seemed initially a ‘marriage of true minds’. Debabrata turns around to accuse Basanti of infidelity. This is a traditional response of an insecure husband or lover faced with his female partner’s advocacy of women’s freedom, which he takes to be a veiled plea for a woman’s sexual freedom. This episode is also crucial for unmasking the hypocrisy of the ‘few good men’ who championed the cause of women’s emancipation, as long as the turf and terrain of that emancipation belonged to someone else.

Similarly, in chapter 19, Basanti enters into a debate with one of her husband’s relatives, Braja, over the subject of motherhood. To Braja’s prudish declaration that “motherhood stands in the way of their [women’s] cherished goal of freedom”, Basanti answers, “Women have never rejected their duties as mothers . . . they have experienced great joy . . . in fulfilling them. But motherhood does become a burden if it is not freely chosen. In a situation where a woman is subjected, that pure feeling becomes perverted . . . Viewed this way, motherhood is never the antithesis of complete independence”. This discussion not only makes a case for the reproductive rights of women but also foreshadows Basanti’s own joy at being a mother at the end of the novel.

A novel of thresholds

The English translation of Basanti has undoubtedly provided the occasion to revisit a remarkable Odia novel published almost a century ago. The novel brings into focus the idea of thresholds – literary and social – inherent in the novel. The ‘crossing’ of thresholds has long held a metaphorical sense of moving from the old to the new. Basanti is a novel of thresholds, attempting to capture this implicit sense of crossing over or breaking through a ceiling. However, complete transcendence is not the aim in this or other threshold novels. They work instead by portraying how individuals fall apart and realign themselves around ideas and questions that threaten to alter the status quo.

The threshold in Basanti is the idea of the New Woman, and both Basanti and Debabrata are stirred by it. But they clearly have varying notions of whether this threshold can be crossed, depending upon where they are positioned within the power structure. For Debabrata, the threshold, though initially attractive, turns out to be dangerous, propelling his male ego into motion. In his inability to occupy, let alone cross, the threshold, Debabrata is reminiscent of Thomas Hardy’s Angel Clare in Tess of the d’Urbervilles (1891). Basanti’s occupation of the threshold is without that kind of ambivalence. The structure of the novel and the society within which it is produced, however, deny her a bold movement across the threshold. Basanti’s crossing would be a story for another era.

S Deepika is Assistant Professor of English at Utkal University, Bhubaneswar. She has a specialisation in American Literature and has recently completed her doctoral dissertation on the Language Memoir and cross-cultural encounters. She has co-edited the volume The Unbilled Hour: Essays on Literature, Culture and Theory (2018).