Skip to content
Archives > A rose by a local name…

A rose by a local name…

The fascination with 'ethnic chic' in nomenclature reveals much about the cultural insecurities of Pakistan's art world today. 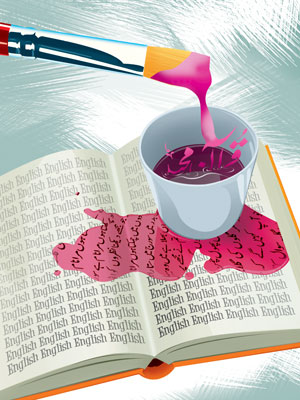 ‘I am a Czechoslovakian, sir’ says the one.
The other slaps him and says, ‘So what?’
– Bohumil Hrabal, The Betrayal of Mirrors

What’s in a name, one may ask. But names and descriptions can pose serious existential questions. One remembers a short story, Shahadat, by the Urdu writer Intizar Hussain, in which a man, during the turmoil of Partition, is reluctant to disclose his actual name. Instead, he decides to use a few other names, which generally signify other faiths. In so doing, the protagonist ponders the significance of a name, and its logical link to the person who ‘owns’ it.

Besides posing existential questions, names have acquired much weight and visibility in the cultural sphere in Pakistan in recent years, especially in the art world. This has become particularly apparent in the tendency to name art events, galleries and publications using ‘local’ terms, such as Vasl, Shanakhat, Khayal Khana, Taza Tareen (art events) Nukta, Nigaah, Suhbat (publications) Nairang, Majmooa, Kunj, Koel, Khaas, Royaat, Gulmohur (galleries) and so on. A similar propensity is visible in art scenes around Southasia, in a trend that has been visible for the past decade but has shown no signs of slowing down in recent years. All such usages reflect a longing to employ seemingly ‘profound’ local terms in connection with art.

Baptising art (and other, more mundane activities) in the commonly used language – in Urdu, for instance, in Pakistan – is of course not odd. Most Pakistanis are accustomed to seeing words such as ashiyana, kashana, gulshan, khayaban, basera and aafyaat as names of houses; while businesses are regularly dubbed Qalamkar, Aaahan, Kaprey Waghaira, to note just a few. (A more recent phenomenon also has restaurants being ‘ethnically’ named – Ziaafat, Nakhal, Gupshup, Mirchie, Dhaba, Dumpukht, etc.) Interestingly, this proclivity often extends to businesses that deal solely with international clients, or houses owned by people who never converse in Urdu (except perhaps to scold their servants). Perhaps such local-language phrases strike the ear with romantic or poetic or even profound connotations – or maybe they are preferred simply because they appear more authentic as the gap between sections of society grows.

In the realm of art, the Pakistani practice of naming in Urdu is peculiar and paradoxical for multiple reasons. The business of ‘high’ art in the country continues to take place almost wholly in English: art education, artistic discourse in the form of criticism, seminars, magazines and majority of books (even those that are locally printed), titles of artworks, invitations to art shows, lists of exhibits and usually even visitor comments. Because of this, art students with limited knowledge of English often initially feel left out. But by the time such students graduate, they too have learned to read and write in English, an alien language that has become the necessary tool of communication in the Pakistani art world. In this instance, the use of English is not merely the mark of a multilingual culture, but also denotes an important class division – perhaps one that can afford the freedom for artistic pursuits.

Given this dominance of English in art, culture and official matters, it is a statement of sorts when one affixes Urdu labels to one’s artistic undertaking. Art workshops, galleries and magazines typically employ English (for instance, two Pakistani art magazines, Nukta and Nigaah, are solely in English), yet bear non-English names. An observer could easily read conflict into such a custom, but it could also be that those who are opting for Urdu terminology are in fact seeking to dissolve the apparent gap between the Western notion of what constitutes ‘art’ and more traditional concepts of aesthetics.

Another possibility is that, by choosing terms from a commonly spoken and understood language – typically Urdu – they are aiming to establish a link with the people and the locale. (Oddly, for the same reason, the country’s regional tongues are not often deployed in such instances, because they are not used throughout the whole of Pakistan.) But in fact, this is a link that does not really exist, because visual art, even though it includes certain attempts to reach out to the society at large (public art, graffiti, site-specific works, etc), largely fails to incorporate the vast majority of the people. This is certainly the case in most of today’s Pakistani art culture. Hence, most artistic activity remains highly exclusive, a situation that is both assisted and exacerbated by commercialism and commoditisation, particularly as evidenced through the inordinate control of galleries and collectors. Against this backdrop, it is not surprising that the art scene remains focused in posh localities – and, often, in places where one can only reach by car or private taxi, rather than by public transport. Indeed, this is a gap that manifests not only in art, but in other aesthetic practices of Pakistan.

Rediscovering an aesthetic
Simultaneously, perhaps even in reaction to this disconnect, there has evolved a fascination with ‘popular’ art in Pakistan. Cinema hoardings, lorry decorations, advertisements for local products and events, greeting cards and the like have all increasingly become of interest to the art world in recent years. In fact, it is instructive to trace the history of popular art in Pakistan, and its acceptance and admiration among the cultural elite. Long before the term ‘popular art’ came to be widely used, of course, such items were simply a part of everyday life. A quarter century ago, most people spent little time thinking about the popular aesthetic of, say, traditional utilitarian items – for example, when picking up a roti from a dasterkhwan, the conventional piece of decorated fabric on which food is placed. Likewise, if a group of travellers boarded a bus bound for Quetta, they were probably not conscious of being inside a combination of popular art and modern technological craft. They may have appreciated a particularly nicely painted bus or printed dasterkhwan pattern, but most would not have put these into the category of ‘art’.

In the early 1990s, however, so-called popular art was ‘discovered’ by a number of artists (including Durriya Kazi, David Alesworth, Iftikhar Dadi and Elizabeth Dadi), as they investigated and tried to assimilate traditional aesthetic into their own work. After the success of these early attempts, some forms, such as truck art and painted cinema hoardings, are now projected as marks of ethnicity and ‘authentic’ Pakistani cultural identity, both inside the country and abroad. In fact, this process is operating at two distinct levels. At one level, the common people are busy expressing their artistic feelings through everyday objects – buying dasterkhwan, decorating their buses and rickshaws, glancing at cinema hoardings. On another level, there is a contingent of society that does not regularly come across these items in its daily life; to these people, such objects not only signify notions of indigenous beauty, but also serve to locate the roots and rationale of their culture.

In this context, the tendency to use local terms for art activities is closely related to the fascination with popular art, and explains today’s fashion of, say, decorating modern houses with examples of ‘ethnic’ craft. In this way, one can create and convey a connection both with the past and the region – even if that link is in most cases superficial, forcibly imposed and short-lived. After all, the real users of ‘lately discovered’ art pieces hardly consider these to be art, nor do they buy such pieces purely on the basis of their decorative value (even though they do define and discriminate these as being beautiful or ugly).Hence, more than the aesthetic aspect, such users typically make their choices based essential function of these objects, while being little bothered with the ‘significance’ of these items as a manifestation of ethnicity or local identity.

But ethnicity is important for many others. If on the one hand ethnicity plays a significant part in connecting with the ‘local’, the thought process behind names such as Nukta, Nigaah, Suhbat or Shanakht might be a symptom of the desire to move beyond the ordinary. Because to have a magazine called ‘Point’, ‘Glance’ or ‘Meeting’ or an art event described as ‘Identity’ might appear banal, even clichéd;but as soon as that mundane term is translated into another language, it acquires an exotic note, and not for English-speakers alone, but for others too who are not well versed in this language. This syndrome is also in play when the visuals from, say, truck art are plucked from their origins and incorporated in ‘high’ art. Yet all the while, the meaning attached to these has hardly changed, so the mere shift in ‘diction’ does not suffice to imbue a sense of originality in these endeavours.

If a real change is sought to bring the silent majority (and its language) and a select group of the art community (with its English) closer to each other, something is needed beyond labels and titles. One way or another, we need to include the reality of our existence in our art. Although there is no single way to do so, the superficial scheme of ‘Urdu-ising’ is certainly not an acceptable approach. Common sense tells us that if a person is able to read an entire issue of an art magazine in English, giving it an Urdu name is a forced, if not farcical, exercise. Similarly, if an art event or gallery exhibition sends out invitation cards to an event in English, it does not need to adopt an Urdu title merely to justify the creation and exhibition of art in the Pakistani context.

In that sense, as long as we have names like Shanakhat, Khayal Khana, Taza Tareen or Nukta and Nigaah for community-art projects or magazines, we are immediately made aware that there is a distance between the artist and his or her presumed audience. And this is not a gap that can be bridged through cosmetic efforts such as adopted terminology. In fact, it may be far more realistic simply to drop such nomenclature entirely, and recognise the fate of our art: that it is high, limited, exclusive and elitist.

~ Quddus Mirza is an artist and art critic. He teaches at the National College of Art, Lahore.

A recent anthropological volume on Jammu & Kashmir makes important new contributions to scholarship on the region.

Who doesn’t put ghee in their khichuri?

On food and representation, online and offline.

The disconnect on Digital Pakistan

In Pakistan, the government invests in its digital presence while stifling dissent.

Elections in Sri Lanka, freedom of speech debates in India, war on drugs in Bangladesh and more

Southasiasphere: Podcast #01 - Updates and analysis from around the region.