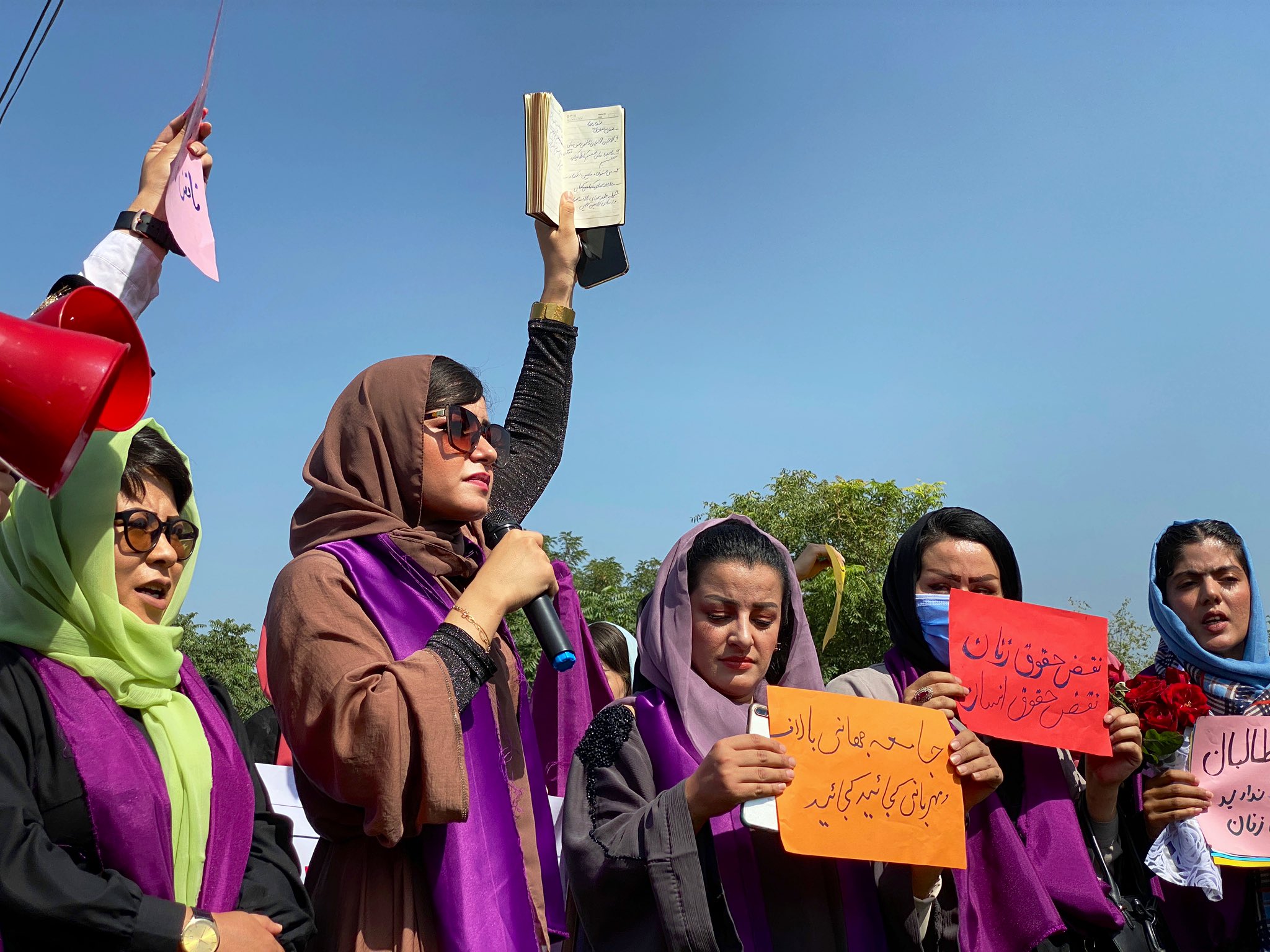 Among the first narratives to come out of Afghanistan after the collapse of Ashraf Ghani’s government involved the erasure of women from public view. On 15 August, ToloNews TV head Lotfullah Najafizada tweeted a photo of a man painting over ads outside a beauty salon in Kabul, shortly before the Taliban advanced on the capital. Since then, women have been turned away from universities and workplaces, leading to protests in Kabul and Herat. On 4 September, a women’s protest in Kabul turned violent, with Taliban forces using tear gas and at least one protester injured. As competing claims emerge from Panjshir, where there has been heavy fighting between the Taliban and the National Resistance Front, the fate of the country’s women and women activists remains uncertain.

This is the subject of our interview with executive director of the Afghan Women Network, Mary Akrami, who also founded Afghanistan’s first shelter for women fleeing family violence.

Himal Southasian: Can you describe what the situation in Kabul was when you were still there? When did you leave Kabul?

Mary Akrami: I was in my office when the Taliban entered Kabul, and I had to leave without even taking a notebook. I will never forget that moment. I was pressured by my family to leave first my office and then my home, as it would not have been easy for my family if I didn’t. So I left for a family member’s [house] near the airport. It was not an easy decision to make. I only left out of respect for my family. I am still in shock.

They came to the streets to ask for rights, justice and equal participation as the Taliban has asked women to stop coming to office.

I left for the [international] airport on 16 August. On the first day I arrived at the airport, I was not expecting so much of a rush. I cannot express my feelings, how hard that day was. We couldn’t board a flight as there was bad firing [shooting at the airport]. I was there for two nights.  We slept on the ground waiting for a flight. We faced many challenges at the airport.

I have never experienced anything like this. During the Taliban era, I left for Pakistan with my family, but this is a totally new experience.

HSA: What is the situation like outside Kabul, since most of the reporting in international outlets focuses largely on the capital? Is it fair to say that women in the provinces are being impacted differently to Kabul?

MA: They have been trying to raise their voice. On 2 September, there was a demonstration in Herat held by women. They came to the streets to ask for rights, justice and equal participation as the Taliban has asked women to stop coming to office. But that is only in Herat. In the rest of the provinces, this is not easy to do. Coordination and leadership is needed. Some women have left the country, and many women from the other provinces have moved to Kabul. Before I left the country, I helped arrange safe places for other women from the provinces.

HSA: What might be the outcome of the demands from women in Herat, particularly for the inclusion of women in leadership positions going forward?

MA: The women in Herat had a very clear message. They all asked for equal rights and participation. They said “we have education, we want to play a role at all decision making levels.” But many of them are from the younger generation, between 22 and 25 years old. I am sure they will not remain quiet and they will continue fighting, but it’s still so fresh.

As Afghan women, we have been waiting for peace for 43 years, but there has been no sign of peace.

On 4 September, there was another demonstration [in Kabul] and I was in contact with women who were beaten by the Taliban and were badly injured. The women were very upset. I can see everyone is discouraged or is discouraging others, saying it is not right to go to the streets and raise their voice. I’m afraid that they are going to accept everything. It’s really difficult for all women. I feel bad to ask women to come to the streets if there is no mechanism to protect them. The only thing we can do is to encourage women, to talk to friends.

For a start, women all around the world have to stand with them. This is not 1995 or 1996. This is not 2001. There is a huge difference. The Taliban has to adjust and accept that and listen to what women are advocating for.

HSA: What future awaits the women’s shelters for victims of violence, like the ones you helped found? Will the Taliban guarantee their safety? Have you been in touch with any of the women still in the shelters?

MA: Unfortunately – I just spoke to women who are living in the shelter – the bank is not giving them money [access to their bank account]. There are 50 to 60 women and children in the shelter at the moment. The other [branch of the] shelter has been closed and all the women have been brought there. I have received hundreds of messages from the shelter and I don’t know what to do to try to help these girls. They keep sending messages saying, “Please don’t forget us.”

They are closer than my family, and I’m not able to save them.

Some of them have been there for a long time. The first girl I ever received at the shelter in 2004, is still there. She was tortured by her family. She is now educated and was working at the restaurant [attached to the shelter] that’s now closed. These women went to university, they went to work as social workers. They don’t have anyone, and some of them come from very rural areas. It’s not easy for women to stand against such a situation. I’m so worried.

I was in my office when the Taliban entered Kabul, and I had to leave without even taking a notebook. I will never forget that moment.

I have friends still in Afghanistan and I am trying to send money. Right now they are borrowing food and everything from the shops. I tried to arrange immigrant visas but these women are not employees of the organisation, they are beneficiaries. We are still trying to lobby and trying to help them, but I’m stuck and don’t know how I can help. In Canada, friends and women activists are trying their best. There is a huge need, especially for these girls in the shelters. They cannot be found by their families, they will be in more danger.

HSA: What do you think of claims that the Taliban is willing to give space to Afghan women to work and study – is that being borne out on the ground?

MA: There is a huge difference between what they say and what we see on the ground. We saw this in 2019 in Doha too. They were so polite and nice when they received us. But see how they are beating and abusing women in the street.  When you entered offices [after the Taliban took over] you couldn’t see any women. And they just announced to the world that girls can go to school until grade 6. This is ridiculous. When we had the meeting in Doha we said we have doubts whether [the representatives at the negotiation] have direct connection with those on the ground. Some connection is needed to further enforce and remind them of what they said then. Since 2001, it’s been a very tough journey. It’s not easy to succeed [with such negotiations]. But they [the Taliban] should reach out to women and talk. Why are they ignoring them? Why are they scared?

HSA: You were present during some of the Afghanistan government’s negotiations with the Taliban in Doha. How did the talks evolve? How did you come together to present unified demands? Why do you think negotiations were ultimately fruitless?

MA: It was very interesting. I went as part of the group dialogue in 2019. We had just 3 hours in the airport and 3 hours on the plane. By the time we arrived in Doha, we succeeded as women delegates in lobbying collectively as a group, although everyone had different backgrounds. Initially, everyone wanted to represent their ethnicities and groups. We were all able to come together and represent Afghanistan.

I have received hundreds of messages from the shelter and I don’t know what to do to try to help these girls. They keep sending messages saying, “Please don’t forget us.” They are closer than my family, and I’m not able to save them.

It was not easy to face the Taliban. We all had a chance to talk to the Taliban and ask them to prepare for Afghanistan of today. We told them that they can’t enforce their ideology and thinking. As women delegates, we sent a very clear message to them. We asked if they could give us more time to interact with them.  I am sure we could have convinced them to accept a ceasefire. Women have the courage and the ability to talk, not just on behalf of women, but in general.

Even though the Taliban didn’t feel it, we succeeded at the airport and I’m proud of that. But they didn’t involve us in the next round of talks. There were women who were very active in the negotiation process, though I’ve since been disconnected from them. Unfortunately, no one listened to them, though they tried their best. I don’t know why the negotiations took 3 or 4 years. We paid a high price for that.

As Afghan women, we have been waiting for peace for 43 years, but there has been no sign of peace.

Note: This is an edited transcript of a telephone interview.