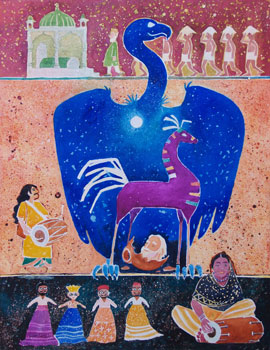 In an old myth of the Subcontinent, a giant bird or demon swallows the moon, plunging the earth into darkness. In this painting by Sabir Nazar, however, most of the world is oblivious to the presence of this demon, with life continuing on in regular cycles of night and day. Both the moon and the inky night sky remain within the beast, along with knowledge of the stark fate of those it has devoured. The beast overwhelms the viewer, its large, dark presence dominating the painting. Its wings are lifted, as if it might soon spread them; at the moment that it does so, the entire scene will be engulfed in darkness. But the neighbourhood does not notice. As at the bottom of the painting, people go about amusing themselves; at the top, they work and pray. The bird-demon looks at them hungrily, a malicious smile on its beak.

Ahmed Khan Kharral was a freedom fighter who led a powerful revolt against British rule in the area around Okara in present-day Pakistan. After finally suppressing the revolt, the colonial authorities had Kharral decapitated and his head kept in a pot in their fort. His face now gazes out from a broken vessel, witness to the darkness and the indifference around him. 24″ x 36″ watercolour