A photo essay on love and loss in Kashmir. 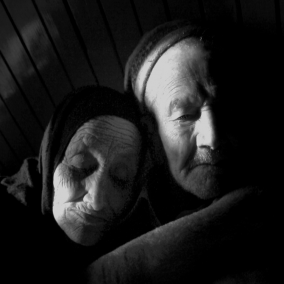 Akbar and Maryam, my grandparents, were married for 63 years. Akbar had lived a busy and disciplined life as a chauffeur. Maryam, on the other hand, loved to cook and spend most of her time with family and friends, hosting parties almost every month. They lived in the Pandrethan area of Srinagar.

When I was four years old, I used to think that my grandfather was my father, because my father was so busy with work that I hardly saw him. It was my grandfather who used to pick and drop me from school, and it was he who bought me my first camera. After his retirement, he tried to make every single moment special for all of us, even taking me with him on his trips.

Three years ago, he started to develop symptoms of dementia and was diagnosed with Alzheimer’s disease in 2016. In this photo essay, I document the psychological toll this had on my grandparents. This story is an intimate account of my grandmother’s struggle with her husband’s psychological illness, of her becoming a nurse for him and then growing old with his lost memory.

For her, it has meant living like a stranger with her own life partner who couldn’t even remember who she was. As his illness developed, he always looked puzzled, sometimes forgetting how to do simple things like eat. For me, it was the most tragic ordeal of my life: the person who was so close to us couldn’t recognize us anymore.

Grandfather died of a cerebral haemorrhage on 24 July 2018, at the age of 82. From the day of his diagnosis till his death, grandmother, now 75, was by his side, and helped him through his agonising struggle.

When asked about grandfather, my grandmother says, “I will cry. He was my friend, my companion, my love. I miss him badly.”

Yasir Hussain Mir is a documentary photographer from Srinagar. He has been documenting issues related to health in Jammu and Kashmir. Yasir’s work has appeared in several publications and he runs a local photography club called KashmirScape.