Skip to content
People & Politics > All the presidential men

All the presidential men 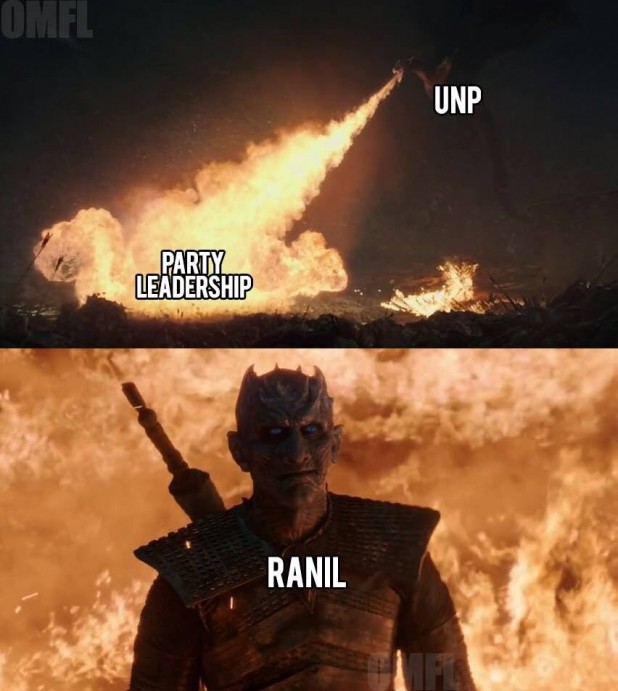 As Sri Lanka approaches its presidential election on 16 November, popular online memes (once again) run a biting line of commentary tangential to that found in traditional journalism. Everything is to play for – from candidates’ political histories and behaviour, to that of their entourages and media houses openly partisan in their coverage.  We give you a selection from the web that provides a snapshot and paint a less-than-flattering picture.

In the meme above, the person on the left is labelled ‘Indian Tamils’ while the person on the right has the label ‘Eazha Tamil’, (a reference to the Sri Lankan Tamil community). Both say: “We both don’t want the lotus”. The lotus flower is the symbol of the Sri Lanka Podujana Peramuna (SLPP), the main challenger to the ruling United National Party (UNP) as it is of the Bharatiya Janata Party (BJP), currently in power in India (but largely rejected by Tamil Nadu voters).

The meme highlights a predicament faced by many Sri Lankan voters – and especially those from minority communities – whether or not to vote for whom they perceive to be the ‘least worst’ candidate. That battle is most acutely pitched between the perceived frontrunners: the governing United National Party (UNP) and the Sri Lanka Podujana Peramuna (SLPP), formed out of a Mahinda Rajapaksa-led breakaway from the Sri Lanka Freedom Party (SLFP) in 2016.

Incumbent Prime Minister Ranil Wickremesinghe is not a candidate in the forthcoming elections but is a key player in the presidential elections. He has remained leader of the UNP since 1994 despite numerous leadership crises, usually revolving around the UNP’s continued losses at elections, often blamed on Wickremesinghe’s lack of appeal to voters. Wickremesinghe is seen as ‘Colombo-centric’, catering to the urban elite and often benefiting from the minority vote against more explicitly chauvinist candidates. Over the years, he has grown more and more unpopular due to the tenacity with which he clings on to the leadership posts within the UNP, rewarding party cadres who are loyal to him while side-lining those who might threaten his position.

Indeed, since 2005, Wickremesinghe has not been fielded as a presidential candidate by his party, which instead backed successive ‘common candidates’ against the Rajapaksa presidency. In 2010, this ‘common candidate’ was retired General Sarath Fonseka who was the Army Commander during the 2009 military defeat of the LTTE (the Liberation Tigers of Tamil Eelam); he lost to incumbent Mahinda Rajapaksa, his former commander-in-chief. A constitutional amendment (number 18) subsequently allowed Mahinda Rajapaksa to stand for a further term in 2015, but he was then defeated by one of his own former ministers, Maithripala Sirisena, backed as a surprise ‘common candidate’ by the UNP and other parties. The 19th amendment restored the two-term limit for the presidency, preventing Mahinda Rajapaksa from contesting again.

In the past year alone, Wickremesinghe saw President Sirisena appoint his political rival Mahinda Rajapaksa in his post (Wickremesinghe was eventually reinstated by the Supreme Court). The UNP Leader faced a no-confidence Motion in Parliament (which was defeated). His ability to survive has found expression in this meme.

After much internal wrangling, in September 2019, the UNP named Wickremesinghe’s political rival in the party, Sajith Premadasa, as its presidential candidate, while Wickremesinghe remains party leader. Many people joke that Wickremesinghe is in fact secretly in cahoots with the Opposition.

SLPP presidential candidate and brother of former President Mahinda Rajapaksa, Gotabaya Rajapaksa, who is being investigated for corruption, was the secretary of defence during the last phase of the civil war when, according to the UN, crimes and against humanity and war crimes may have been committed by both the LTTE and the Sri Lankan state. Gotabaya recently ran a brief risk of being rendered stateless: in the process of relinquishing his American citizenship (which disqualified him from being a presidential candidate in Sri Lanka), the legal status of his renewed Sri Lankan citizenship was challenged in the courts. The case was subsequently dismissed.

With uncertainty about whether Gotabaya would be able to remain at the electoral crease, another brother, Chamal Rajapaksa, made the cash deposit necessary to become a candidate, indicating he was running for president at the eleventh hour. However, when the court dismissed the case against Gotabaya, he did not submit his name for nominations, leading to jokes that he was the ‘back up option.’  Or, as the meme would have it, Gota safe, Chamal run out.

Meanwhile, in this tale of brothers, Mahinda Rajapaksa remains pre-eminent (ineligible to run himself, having previously served two terms as the president).  The far more well-established of the Rajapaksa brothers, Mahinda often occupies the elevated position even at campaign events for his brother – sometimes on more ornate chairs, sometimes fielding questions at press conferences, or getting the crowd roaring at SLPP rallies. His primacy within his clan is reflected in the meme below.

Padman vs Man with the van

Not just global but regional cultural themes cross borders in these memes. Following the UNP candidate Sajith Premadasa’s campaign promise to distribute free sanitary napkins to all women in Sri Lanka, a meme caricaturing him as ‘Padman’ emerged, referring to a popular Hindi film based on the real story of the Indian social entrepreneur Arunachalam Muruganantham, who produced a low-cost alternative to commercially available sanitary napkins.

Premadasa’s retort was to tweet: “I will wear the #padman label proudly. In my view, it is certainly preferable to being the #manwiththevan,” a reference to allegations of Gotabaya Rajapaksa ‘disappearing’ journalists and other dissidents in white vans during his last tenure in government, charges he has denied.

In Sri Lanka’s meme-world Gotabaya Rajapaksa is not only a side-lined younger brother but also an upstaged girlfriend.

The meme refers to the candidature of recently retired Army Commander Mahesh Senanayake. Senanayake is seen as a candidate who may siphon possible votes from Rajapaksa’s base.  His military credentials are considered to give him the aura of ‘discipline’ that Rajapaksa was counting on projecting himself, and Senanayake is considered to be an appealing proposition to the Sinhala Buddhist voter.

With 35 candidates in the ring, the joke is also on the race itself.  In the meme below, Anura Kumara Dissanayake of the leftist Janatha Vimukthi Peramuna (JVP) asks if only bald men can break the vote (referring again to the arrival of bald-headed Mahesh Senanayake on the scene).

Anura Kumara Dissanayake (AKD) is the candidate from National People’s Power (an alliance of 28 political and civic groups) which is campaigning for the complete abolition of the presidency.  However, the joke in the meme is also on the reincarnated JVP’s recurring failure to convert its popularity into votes.

No election is complete without plenty of comment on money, and this meme below uses the 1990s film The Mask to make its point. Prospective candidate, attorney and ‘public-interest litigation activist’ Nagananda Kodituwakku reportedly raised money for his campaign but finally did not file his nomination. He claimed the party he was going to represent had misled him, and added that the money he had collected from donors was in a bank account and accounted for. There has been no word on whether the funds would be returned, but Nagananda’s ill-fated campaign would prove to be the gift that kept on giving for the admins of meme Pages.

The memes mocking Nagananda’s campaign have another aspect, given that he is an activist. The Rajapaksa government as well as President Sirisena have often dismissed outspoken activists as being ‘Western-funded’ or working against Sri Lankan interests. For the SLPP camp and its associates, Nagananda confirms their preconceived notions about civil society and their hidden agenda, making him an attractive target.

Equally rampant in politics is the theme of the floor-crosser, and this meme below picks on Vasantha Senanayake, the MP who single-handedly earned himself the name ‘Jumping Vasantha’ or ‘Gembo’ (frog). During the October 2018 political crisis, Vasantha Senanayake’s defections were so prodigious that he continues to be lampooned even during the presidential election.

The communal aspect of Sri Lankan politics is highlighted in the meme below, with politicians from the Sinhala, Tamil and Muslim communities each promising to ‘save their community’. The characters here are popular Tamil comedians. “Who will save the country?” Sri Lankans ask in the last slide. The question remains unanswered.

Sri Lanka’s presidential election is scheduled to be held on 16 November, and many are less than enthused by the choice before them. Yet, in their own way, young people are making their displeasure heard – and it’s hard not to laugh along with them.

The article has been revised on 11 November to correct the erroneous translation of the term ‘Eazha Tamilar’.