The recent campaign by Amnesty International against human-rights abuses in Sri Lanka has created quite a hullabaloo. Using as a springboard the English idiom ‘It’s not cricket’ (meaning not on the level), Amnesty used the occasion of the Cricket World Cup to mount an international campaign called ‘Play by the Rules’. The programme involved sending cricket balls to Australia, the Bahamas, Bermuda, India, Nepal and the UK, inviting concerned individuals to sign them in support of sending independent monitors to Sri Lanka to oversee human-rights issues. The signed balls are to be delivered to representatives of the Colombo government and the LTTE.

Amnesty International (AI) personnel are modern missionaries: secular, rational, well-intentioned and firmly attached to the problematic notion of the autonomous individual as a principle of universal applicability. In a world bedevilled by atrocities committed by powerful and weak states and militants alike, such an organisation is much needed. But this does not preclude questions about AI’s missionary excesses – for instance, the organisation’s vague use of the word child in its campaign against child soldiers to refer to those as old as 16.

In its missionary zeal, Amnesty chose to use cricket as an engine of pressure on both the government and the LTTE. AI may have been inspired by the example of FIFA, the international football agency, which innovatively campaigned against racism in sport during the 2006 World Cup football matches. But there are important differences between FIFA’s actions and those of Amnesty International, in terms of both context and response. FIFA followed a policy of uniformity and universality. It did not name names, nor single out culprit governments. It was also acting within its own realm and field of jurisdiction.

In the current situation, however, Amnesty simply used the conventional image associated with cricket – the idea of fair play – to mobilise support for its highly specific cause, which was directed squarely at the two protagonists in Sri Lanka. Amnesty was not commenting on either the Sri Lankan cricket team or its cricket playing, but merely utilising an opportune moment to draw attention to its principles. Moreover, the International Cricket Council (ICC) was not a partner in the campaign, so AI could be seen to have had no right to spread related propaganda at the West Indies cricket grounds.

This is not to say that the two protagonists covered themselves in glory – the Sri Lankan government in particular did not. As soon as the Colombo authorities got wind of the campaign, they mounted strident protests – writing to the ICC as well as various governments. This seems to have been a kneejerk reaction in keeping with the increasing paranoia prevailing among some segments of the Sinhalese population, especially within governing circles. First off, the fact that Colombo approached the ICC at all in its efforts at redressal indicates just how ill-informed the Sri Lankan authorities were. Second, the fact that Amnesty was already disallowed from entering the cricket grounds also means that it would not have been able to directly affect the performance of the Sri Lankan team, as had been one of the central complaints against the organisation. Moreover, the very stridency of Colombo’s reaction ended up enhancing AI’s media campaign in ways that marked the government more than the LTTE. For its part, the LTTE went the other way, accusing the government of trying to hide its “brutality” by attacking Amnesty’s action. Since AI is critical of both parties, the Tigers’ rhetoric is somewhat laughable.

Sports nationalism
In kneejerk protests Sri Lankan cricket fans were also aroused to make the hackneyed argument that politics should not be imported onto the sports field. Such a contention cannot be sustained and bespeaks a narrow view of politics. The fact is that the sports field has become one of today’s prime political arenas. A well-established branch of academia now deals specifically with the topic of ‘sports nationalism’. The Institute of Commonwealth Studies in London recently assembled a number of analysts to discuss politics and race issues in cricket, while the journal Sport and Society recently brought out a special issue entitled “Cricket, Race and the 2007 World Cup”. Race and related issues still intrude every now and then both on and around the cricket field.

But what is ironic about the Amnesty International camp-aign is its seeming lack of awareness that the Sri Lankan cricket team happens to have the greatest ethnic and religious mix of all the teams competing in the World Cup. The Sri Lankan teams of the last few years have represented a fair cross-section of the island’s ethnic and religious groups, including Sinhalese, Tamils, Muslims, Burghers and Colombo Chettys. Team members have been Buddhist, Hindu, Muslim and Christian. No other country can claim such diversity in its national team. 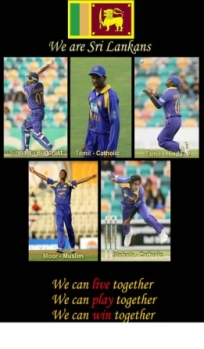 Perhaps knowingly, Amnesty stepped into an arena that is considered nearly sacred among Sri Lankans, whether Tamil, Sinhalese or any other ethnicity. Cricket has been one of the few areas outside of the ethnic conflict where Sri Lanka has made its mark on the world, and generates one of the few regular news broadcasts that bring regular joy to Sri Lankans, both at home and abroad. As such, cricket has been a cathartic realm for many, and Amnesty’s campaign seemed to have invaded an arena that Sri Lankans had nurtured as their link to the inter-community harmony of the past. This discontent was evident even among likeminded organisations. The well-known Colombo-based watchdog Free Media Movement (FMM), for instance, called upon AI to retract its campaign. “Cricket, essentially based on a foundation of meritocracy, exemplifies the democratic ideal, and is a powerful bond that unifies all communities in Sri Lanka,” FMM said in a statement. “Cricket offers a war-weary nation an important psycho-social release. Cricket is, as the adage goes, almost a religion to many peoples in Sri Lanka. To revel in our victory on the field is to take our minds away, even for a moment, from the bloody reality of conflict.”

The widespread criticism only caused Amnesty to righteously dig in its heels. In one press release, it stated: “The distortion in Sri Lanka of Amnesty International’s campaign ‘Play by the Rules’ is a ploy to distract attention from the increasingly desperate plight of hundreds of thousands of Sri Lankan people.” Among the strident voices directed against AI are indeed those that can be called ‘Sinhala chauvinist’ or ‘communalist’. But in fact, a significant number of moderates and non-Sinhalese have also been angered by the campaign. Within such a context, therefore, it has encouraged the chauvinists to target NGOs deemed to be in league with Amnesty.

A recent comment from P Saravanamuttu, director of the respected Centre for Policy Alternatives, indicates the manner in which the AI campaign has planted a few more landmines, so to speak, on an already difficult field of operations. “The point about the Amnesty campaign is that it is in danger of being self-defeating and of ricocheting on the efforts, both local and international, for human rights protection in Sri Lanka,” Saravanamuttu wrote. He added that “The Amnesty campaign … is additional fodder to the local, self-proclaimed patriots who will no doubt garnish their rhetoric about traitors with reference to the Amnesty campaign.”

Ultimately any human-rights or social-justice action needs to be judged not on its innovativeness but on its effect on the ground – here, on the Sri Lankan soil. Given the frustration evident in the sentiments expressed by Saravanamuttu and others, Amnesty International would do well to mark down its Play by the Rules campaign as an educational experience.

~ Michael Roberts is an adjunct associate professor of Anthropology at the University of Adelaide.