An ode to Lahore

A gift for a 'history-starved' land. 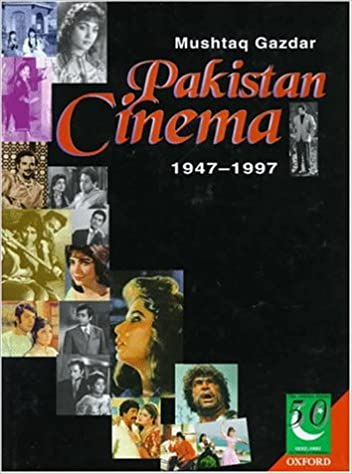 There are no history books worth the name in Pakistan. Children encounter Pakistan Studies as a compulsory subject and the text they are given m class to cover the last 50 years makes no mention of facts and personages, unpleasant and pleasant, such as Ayub Khan, the Movement for the Restoration of Democracy, or the Mohajir Quami Movement (MQM). It is in this history-starved land that this book by Mushtaq Gazdar arrives.

In writing about Pakistan cinema, documentary-filmmaker Gazdar has written a history of the lands culture and times. Reading this book, one cannot separate Pakistani cinema history from, well, history. In reading history thus, the subject is no longer the monopoly of regimes but the property of the people and their memory. Gazdar shows the cultural processes behind the major events, and tracks these processes through the work, the voice and career of the individual.

An example of the breath-giving freshness of this approach is Maula Jat, the biggest blockbuster of Punjabi cinema whose ail-too successful formula established a stranglehold on the industry for over a decade. When the film is mentioned, all polite conversation ends. But Gazdar gives a first-rate analysis of MaulaJafs advent and impact against the backdrop of Gen Zia-ul Haqs martial law and Bhuttos trial and hanging.

The film came out on the eve of the final act of the Zia-Bhutto drama. Its villain, Nuri (played by Mustufa Qureishi) is soft-spoken, polite and wants total power (cut to Gen Zia on PTV promising elections, accountability, summary military justice). The film was a great hit in Punjab and rural Sindh, the Bhutto constituencies.

In five chapters (there are six altogether) , one for each decade of Pakistani filmmaking, everything post-1947 is here. Explaining the films and following the careers of filmmakers, Gazdar hits all the historical potholes, from Partition through Ayub Khan and his Ministry of Informations Goebbels-like (Gazdars term) cultural policies, 1971 and the rise and fall of Bhutto, Zias long martial law, Islamisation, and the Motion Picture Ordinance.

Through all this, Gazdars eyes are firmly on the lives and careers of the film directors, the music directors, the lyricists, the actors and producers, and the challenges facing the industry in Lahore, Karachi and Dhaka. We do not get a litany of “great” leaders and events, but in reading of the changes in cinema and culture we get a insightful perspective of the obstacles.

The author cannot but help look at the Partition generation and show how their careers were affected by that wrenching event. He describes the life and times of film people such as Shaukat Hussain Rizvi (director of Jugnu, the Dilip Kumar/Noor Jehan starrer); GhulamHaider (music director who gave Madam Noor Jehan, Shamshad Begum, Lata Mangeshkar and Mohammed Rafi their first major breaks); W.Z. Ahmed (producer who owned the Shalimar Studios of Pune); and Noor Jehan. For many, Partition cut their careers into half.

Gazdar also provides interesting insights into the decline of Pakistani cinema. After Partition, Indian films were coming into their own with Dilip Kumar, Raj Kapoor, Madhubala and Nargis all on the rise. Pakistani filmmakers who crossed over to the west, however, literally left their careers behind. Once established in Pakistan, they wanted to close the doors to Indian films so that they would not have to compete. Liberal artists like Ahmed, whose film Roohi was the first to be banned by the censor board for its left-leaning sympathies, led the movement to ban Indian films.

The result was a lot of imitation and declining standards. Rizvi and Ahmeds output diminished drastically and soon stopped altogether. Only for Madam Noor Jehan, nothing, not even Partition, stood in the way.

The book says little about how those, who had to leave Lahore after Partition, fared in the Indian cinema business. There is just one complete story: Quetta-born Roop K. Shorey inherited Kamla Movietone in Lahore. He produced the Punjabi block-buster of 1943, Mangti (with an all-Lahori cast), and left for Bombay in 1947 when his studio was burnt down by a mob.

In 1951 Shorey produced the blockbuster Ek Thi Larki with his film-star wife Meena. In 1955, the couple came to Lahore to make Miss 56. Meena, overcome by the attention given to her by Lahoris, as opposed to Bombaywallahs, decided to stay back. Writes Gazdar, “…heart-broken Roop had to take another trip from Lahore, empty-handed… first losing his livelihood, and then his sweetheart. (He) was never the same man again… and she died a pauper in 1989.”

Everything pre-national is here too and that is the first chapter. Here, Pakistani readers are finally allowed knowledge of the many lands and many centuries that have led to our present culture. So how does Gazdar write a pre-national history of Pakistani cinema when others who attempt to write about Pakistani history face such crippling problems? How do you start talking about things Pakistani if you do not want to admit that once we were Indian?

The question about beginnings makes us anxious because it involves complex questions of identity. If we were Indian why are (and when were) we not? Whereas the state monumentally organises itself around the we-are-anything-but-Indian mantra through its media, foreign policy, military budget, the Pakistani public merrily goes ahead and welcomes the on-air superiority of Channel V and Zee TV. (Recently overheard: a media baron in Lahore told a representative of a multinational advertising agency that Pakistani viewers hooked to satellite are “15 percent going on 100 percent”.)

“Artists and technicians who made it good in Lahore were invariably attracted to Bombay,” writes Gazdar. A.R. Kardar for example, belonged to a landed Punjabi family, led the Bhatti Gate Group of intellectuals, made silent films in Lahore, but eventually settled in Bombay. There he made Sharda, Dulari, Dillagi, Shahjehan and jadoo (all famous for Naushads music as well).

In the same first chapter, Gazdar smoothly moves beyond the national histories, and goes back to pre-nation state, to resurrect the literary theory of Kautilya (the writer of Artha Shastra from the Mauryan era), and the aristocratic attitude towards art of Akbar. He also writes about the Mughals, the courtiers, tradespeople and the peasants, doing this to explain, among other things, why music is so central to film, the infallibility of our film heroes (“the Krishna legacy”), and how Muslim rulers, including the Khiljis, Tughlaqs, Sayyids and Lodhis, all patronised the arts and held the orthodox elements at bay.

Gazdars juxtaposition of cinema history with history per se works. How else can one explain Pakistani cinemas sudden ugliness in the late seventies and eighties? Murder, rape and pillage filled the screens, as if someone had thrown a switch. It all had to do with martial law and the resultant cultural atrophy. The General had decided to bloody his hands in the Afghan crisis, and as guns and drugs flooded Pakistan we became brutal as never before. No wonder Maulajat spawned a hundred clones thereafter.

The wonderful thing about Gazdar is that he is an optimist even while describing the worst excesses by producers. He writes about recent releases with genuine excitement, and has focused attention on some genuine nuggets of the recent past. Rangeelas 1979 hit Aurat Raaj is one of them. It is a gender-bender: a womens party wins an election and decrees that men shall wear confining dresses, rear children, and perform house-work. All the top (and macho) male stars of the day acted in the film and did their bit.

What a brave town Lahore turns out to be in the book! Despite all the problems created by state and market, it keeps churning out cinema. There was a 50 percent rise in the production of Urdu films between 1994-96 despite stifling cultural policies and a despondency that had not lifted since the 1980s. Generals and ministers may make grandiose speeches calling for the betterment of the industry, but the filmmakers are out there shooting, shooting. Mushtaq Gazdar, a Karachiwalla, has written the best tribute to Lahore.