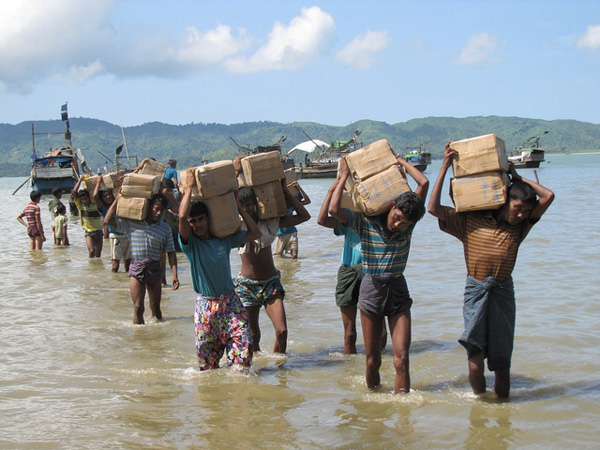 A camp for internally displaced people (IDP) near Sittwe. The camp can only be accessed by sea with boats for transporting vital aid supplies such as rice and cooking oil.

The migrant crisis in the Andaman Sea saw some 8000 people – some Rohingya refugees and others Bangladeshi economic migrants – trapped at sea. The immediate cause of the crisis was Thailand’s crackdown on the smugglers, who had until recently facilitated the movement of people across borders. With the Thai border closed, the boats, crammed with their cargo of human misery, were pushed southwards, where they were no more welcome. Indonesia and Malaysia also ordered naval forces to stop the boats from reaching land. Following an international outcry both countries relented, allowing the boats to land. But they immediately repatriated all citizens of Bangladesh and insisted that the Rohingya only have temporary asylum, pending their removal to a final, as yet unspecified, location within a year.

Whilst this crisis has only recently received global media attention, it has been ongoing for years, and is not limited to Bangladeshis or Rohingyas, as Burma has continued to engage in a series of violent civil wars with ethnic and religious groups that reside within its borders. First, the military government and now, more recently, the partially democratised government of Thein Sein, have oppressed not just the Rohingya (although a unique case because the government denies citizenship to this community) in Rakhine state to the west of the country, but also peoples in Kachin, Kayah, Kayin and Shan states to the east, bordering Thailand.

The history of this repression is well known: Burma’s military, drawn from the Bamar people who make up almost 70 percent of Burma’s population, have engaged an authoritarian state-building exercise, seeking to both centralise political authority in their hands and gain unhindered access to the resource-rich outer regions of the state. The conflicts are complex, often involving multiple competing sides where the motives are part economic, part political and part ethnic. This is especially true in the case of the Rohingya, where they, as a Muslim minority, are in conflict with segments of the Buddhist majority population as well as the central government itself, with all three sides accusing the other of ‘stoking the flames’.

The result of these conflicts is also clear to see. Almost a million people have been internally displaced within Burma either through trying to escape the government or because they have fallen victim to centrally organised relocation of population. Some 100,000 Rohingya, who remain in Burma, have been rounded up into camps, dispossessed of their land and livelihoods and dealt with as illegal immigrants. Further, thousands live just across the border in Thailand in migrant camps.

There are, however, two more causes for the migrant crisis Southeast Asia is facing, both of which are often ignored by observers: the peculiar relationship between Burma and other states in the region through the Association of Southeast Asian Nations (ASEAN), and the process of reforming ASEAN that has taken root over the last decade and a half.

ASEAN synthesis
If the Rohingya and other ethnic minorities find no home in Burma, ASEAN’s relationship with the Thein Sein government also offers them little comfort. ASEAN’s default position was traditionally, and it still remains, I believe, non-interventionist – the domestic affairs of its members were not legitimate parts of the conversation between states. This was certainly evident when Burma joined ASEAN in 1997 with barely a mention of its domestic political circumstance, even when the repression and violence was at a peak.

This position offers no direct help to the marginalised peoples of Burma and serves as a permissive condition for the country’s repressive policies. Whatever little ASEAN has done in the past has been completely ineffective. And now it appears to have stopped trying.

There was a period in the mid-to-late 2000s when Burma was subjected to regional criticism. Burma’s withdrew its claim to the ASEAN chair in 2005 under strong protest from other members denouncing its domestic policies. This revealed that Southeast Asian states were willing to limit Burma’s access to prestigious opportunities. After the 2007 ‘Saffron Revolution’, in Burma, the then chair of ASEAN, Singapore, went so far as to express its ‘revulsion’ at the country’s activities.

Burma’s limited democratisation since the late 2000s has shut down even this criticism, and reveals how weak ASEAN is. There is no evidence that ASEAN’s public condemnation of Burma in any way facilitated the process of democratisation. It is far more attributable to the changing political calculations of the military elite within Burma who, through crafting a constitution that entrenched their political power ‘behind the scenes’, were able to maintain the political balance they preferred without having to do so in the full glare of international criticism. This shift has, despite the flaws revealed in the recent crisis, left ASEAN unwilling to criticise Burma at all. There still has been no official ASEAN statement on the Rohingya crisis. Regional diplomats have warmly and loudly embraced Burma’s partial transition. In contrast to 2005, Burma chaired ASEAN in 2014 to wide acclaim, celebrating its return to the fold. The public normalisation of Burma’s relationship with ASEAN despite ongoing repression within the country suggests other Southeast Asian states were less interested in the fate of civilians in Burma and more in the fate of their own reputation. Not only can ASEAN not comment on the domestic affairs of its members, but in so warmly welcoming Burma back into the club of ‘legitimate members’, other states have now publicly backed the country, something they cannot undo without great personal loss of face.

So, Burma’s relations with ASEAN both protect it from criticism and legitimise the government and, through this, its actions. There is no way the Rohingya, or any other domestic group in Burma, can reach the collective attention of other Southeast Asian states. What makes this silence both more galling, more dangerous for ASEAN – and ironically, makes it attract more attention than it would have otherwise – is the fact that since 1997, ASEAN has been reforming itself. Over what is now nearly 20 years of reform, ASEAN has sought to label itself as ‘people-centric’ – a slogan that is intended to suggest that ASEAN is no longer the elitist body it once was, but is now very much preoccupied with the lives of 630 million people who live within it. To realise this goal, ASEAN has adopted the 2012 Human Rights Declaration and established two commissions, one of which deals with women and children.

The Declaration was the result of a compromise between the democratic states (most notably Indonesia and the Philippines) and the non-democratic states (most notably the newer members of Cambodia, Laos and Vietnam and, of course, Burma) of ASEAN. In my work I have described this as the ‘ASEAN Synthesis’, where progressive states get to institutionalise human rights but non-democratic states condition that institutionalisation by removing any ability to enforce those standards from the new agreements. The Declaration is not mere symbolism, but is limited by its genesis as a political compromise.

An analysis of the Declaration reveals the details of this synthesis. Over its first 39 articles, it enumerates a wide range of civil, political, economic, cultural and social rights, and even rights to development and living in peace. Yet it also, in the last article, insists that none of these rights can be used to violate ASEAN’s agreed approach to regional affairs – non-intervention.

The ASEAN synthesis has made the institutionalisation of human rights possible, but at an incredibly high price. The commitment to promote fundamental human freedoms is compromised by the strict advocacy of non-interventionist standards, removing from ASEAN any ability to criticise its members even when they fall short of regional standards. It stops ASEAN from acting if the member state does not wish that to happen, but it also massively increases the expectation that ASEAN should do something when human rights are endangered, especially in such extreme cases as the Rohingya. ASEAN therefore falls between two stools – it says enough to make human rights an issue, but not enough to be able to live up to that commitment.

This leaves the response to migrants generally, and the Rohingya specifically, to be led individually by states in the region. Thai policy, especially important given the role of Thailand as the traditional destination state for those fleeing Burma, has undergone numerous changes. The Rohingya have been variously placed in camps, left vulnerable to be picked up by traffickers or even sold onwards to the traffickers by individual Thai immigration officials on their own initiative.

It was the combination of the ongoing migrant crisis in the region and the spasmodic nature of national governments’ response that led to the 29 May 2015 conference on irregular migration in Bangkok. The conference was meant to galvanise national efforts, crafting a more coherent and effective regional response. This was not an ASEAN sponsored meeting, but did include many ASEAN members along with other states in the region and representatives from the UN. The final press release of the conference said all the right things: improving detection and handling of migrants and interestingly, the importance of ensuring conditions within states that would mean migrants would not wish to leave. But the real nature of the conference showed the weakness of state-based responses to irregular migration. Burma had threatened to not attend the conference if the word Rohingya was used and there was no agreement on any mechanisms to enforce either the short or long term responses to the crisis. There was widespread scepticism regarding the meeting, with many claiming it was completely inadequate to meet the crisis.

The three issues that I have described – domestic authoritarian state-formation, Burma’s improving relationship with Southeast Asian states and the limited reforms to ASEAN over the last two decades – have conspired to give the recent Rohingya crisis its particular political relevance, above and beyond the human suffering that we have witnessed. It is not only the lives of the refugees that are at stake, rather it is the political fortunes of both Burma and ASEAN itself. The Rohingya issue exposes the continued cruelty at the heart of Burma’s government, a cruelty hidden behind both its claims to be democratic and the shiny new buildings of Naypyidaw. The crisis has also exposed the inability and unwillingness of states in Southeast Asia to live up to their commitments – an issue with grave consequences for ASEAN.

The ongoing question of how Southeast Asia deals with the causes and consequences of irregular migration is of great importance for the stability of the region as a whole. The failure to meaningfully address why so many are willing to risk their lives, allows for the continuation of a humanitarian catastrophe and causes tensions between national capitals as their policies conflict with each other. With the government of Burma seemingly unwilling to alter its policies there is no reason to expect the flow of irregular migrants to stop or even decrease. This is an issue that will remain at the heart of regional politics, even if it no longer occupies the front pages of the global media.

~Mathew Davies is a Senior Lecturer in the Department of International Relations, Coral Bell School at the Australian National University. His latest book, Realising Rights: How Regional Organisations Socialise Human Rights was published in 2014. You can follow him on twitter @drmattdavies.