Between media and state 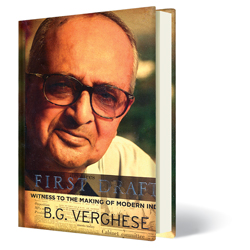 There are two worldviews governing the relationship between an editor and the state. One firmly believes in a model wherein the editor considers himself the natural opposition to the governing regime, while the other sees the role of an editor as part of a nation-building agenda. The latter   does not consider spaces of mutual cooperation and even collaboration a breach of journalistic ethics.  While both approaches have advantages as well as disadvantages, postcolonial Indian journalism did gain substantially from both forms.

B G Verghese, one of India’s seniormost journalists, clearly belongs to the second school of thought. What makes him stand out from the pack, however, is his finely tuned ability to distinguish  right from wrong: he is able to define  the line between engagement with the state to further the public interest, as opposed to lobbying for narrow personal or business interest. Over the years, Verghese served as bureau chief for the Times of India’s powerful Delhi bureau, and later as editor of the Hindustan Times (1969-75) and the Indian Express (1982-86). His memoirs, spanning the entire gamut of independent India’s media, are a gentle reminder of the ways in which a journalist can, ethically and morally, work in tandem with the state apparatus. First Draft shows us that such association with the powers-that-be is vastly different from that of the New Delhi journalists who have been disgraced by the Radiagate Tapes.

The two differing worldviews did not in themselves shape modern journalism in India; the profession also had nuances added to it by two sets of editors: owner-editors and employee-editors. The Hindu from Chennai was the first publication to clearly establish the idea of owner-editors, which was later followed by many publications, including Ananda Bazaar Patrika, The Telegraph, India Today and Malayala Manorama. The operational elbow room available to owner-editors, their privileged perch in looking at editorial content and marketing strategies, and their inherent power to negate the views from the marketing arm (as The Hindu did by rejecting advertising from Dow Chemicals in 2009 to express its solidarity with the Bhopal Gas tragedy victims) have given their publication an aura of editorial primacy.  In the case of employee-editors, every individual editor had to work with the owners to balance the professional creed and the owner’s desire for profits.

The relationship between K K Birla and B G Verghese in the Hindustan Times, read along with Vinod Metha’s recollections of his equations with Vijayapat Singhania (Indian Post) and Lalit Thapar (The Pioneer), are a revelation of the thin ice on which employee-editors skate on a daily basis. The deadly combination of media, market and politics creates endless minefields which have ambushed many a worthy editor. The lateral induction of stars undermining the authority of the editor is also brilliantly brought out by Verghese, as in the case of Arun Shourie in Indian Express. First Draft provides an opening for a vigorous debate on how media houses are run in the democracy that is India. This is a matter that has become a topic of urgent concern after the revelations of Radiagate, in which the journalists at the highest echelons fix political appointments and commercial deals.

‘Left of self-interest’
Verghese’s long career, however, has not been only about journalism. Prior to taking over at the Hindustan Times, he served as information adviser to Prime Minister Indira Gandhi. In the post-emergency elections of 1977 common candidate of the opposition parties for the Lok Sabha from Mavelikkara in Kerala. He lost because the anti-Congress wave triggered by Indira Gandhi’s Emergency did not affect South India. In this century, Verghese also served as consultant to the Defence Minister, and later as member of the National Security Advisory Board and of the Kargil Review Committee, which studied the brief India-Pakistan war of 1999. Each of these roles can, of course, be critiqued from an ideological viewpoint, and the picture could be that of a journalist too close to the state establishment. But the fact that even Verghese’s worst enemy would not be able to uncover any sleaze or undue favouritism in his dealings with the state bears witness to his personal integrity.

The first part of the book has a refreshing breeziness in the personal story. One cannot help but smile when Verghese talks about naming a child in a Syrian Christian household of Kerala:

It is difficult to say when pet names came into vogue but Kunju, Kutty, Kochan, Malayalam variant of the term ‘baby’ or ‘child’, continued to be used beyond the cradle. As these proliferated, recourse was had to Kochakutty (small boy) or a truly nano-name, Kunjuoonjakutty (small baby-baby), which scarcely made for greater enlightenment. … my father’s youngest brother was Kunjuoonjakuttychayan, an oxymoron, literally baby-baby-elder brother, while one of my mother’s sisters Elizabeth, was Aleykuttycochamma (Little Liz big sister).

Meanwhile, his recollections of Doon School, the playground of India’s ruling classes, in the 1930s and 40s, gives an idea of how the Indian elite, despite their class superiority, were forced to keep their feet firmly on the ground. This trait helped most of the founding fathers of the new nation look for inclusive political structures. It was not annihilation of class, but making people acutely aware of the existence of class, that makes the elite learning of that period very significant, and Verghese vibrantly captures these dynamics.

Verghese’s account of Mrs Gandhi’s political trajectory  – from her tentative beginnings to becoming, in Frank Moraes’s words, ‘Madam Prime Minister, Sir’ – is compelling. In the mid 1960s, official government policy on India’s international position had been oscillating between three strands. On one side was the rightward push orchestrated by the then Indian ambassador to the United States, B K Nehru, supported by her Cabinet colleague C Subramaniam who wanted the American PL 480 food-aid package to address the pressing food scarcity issue. On the other side stood a clear pro-Soviet tilt advocated by a powerful group within the diplomatic team headed by T N Kaul. In between was foreign secretary C S Jha, treading the proverbial middle line. The savvy Mrs Gandhi played the B K Nehru line in Washington and during her interactions with President Lyndon Johnson; the Soviet line in Moscow, and used the middle path to garner support within the Non-Aligned Movement (NAM). In the process, she did not alienate either Johnson or Kosygin, and managed to get PL480 aid as well as Soviet support for the Bokaro Steel plant.

Verghese brilliantly brings out the differences between Mrs Gandhi and the other senior leaders in the Congress. The secretive manipulations behind the first devaluation of the Indian currency in 1966 are recollected with fine attention to detail. This was the key moment in the history of Indian governance when the Prime Minister’s Office (PMO) became the all-powerful entity it became and has remained since, offsetting the healthy counter-balance that existed between the collective leadership from the party, the cabinet and parliament itself.  Verghese explains in elegant prose how Mrs Gandhi’s socialism finally reached a point of being ‘a little Left of self-interest’ during
the Emergency.

Nuclear template
First Draft also sheds light on one of the issues in contemporary India that has long been shrouded in secrets and mystery – India going nuclear. The author casts some light on the matter. Following China’s third nuclear test on 9 May 1966, India made the first public commitment to develop the nuclear option. Verghese, as information adviser to the prime minister, invited Homi Sethna from the Atomic Energy Commission for a brainstorming session on the nuclear question. The other invitees were S Gopal (Director, Historical Division, External Affairs Ministry), journalist Romesh Thapar (as Indira Gandhi’s confidante) Pitamber Pant (Head, Perspective Planning Division, Government of India and K Subramanyam (Department of Defence Production). Earlier, Lal Bahadur Shastri had approved the development of the technology but had stopped short of testing.

The template to oppose the Nuclear Non-Proliferation Treaty (NPT) was indeed developed by B G Verghese, and this survived for decades till the emergence of India as a de facto nuclear power following the Indo-US nuclear deal of 2008. It is perfectly reasonable to question the wisdom of going nuclear, and the role played by journalists like Verghese in creating a discourse that makes the disarmament debate difficult within the Indian establishment. But Verghese has been transparent about his views on the nuclear option and this indeed gives an insight into the thinking of the Indian state. Verghese writes: ‘I had long opposed India going nuclear … ..these views had undergone modifications in more recent years. Nuclear disarmament appeared to be a receding goal and nuclear power was increasingly seen as the currency of power.’

It is with a sense of lost opportunity that one reads in First Draft that the question of Kashmir was on the verge of an enduring solution in 1975. The details of the dialogue between Sheikh Abdullah and Mrs Gandhi’s emissary/adviser G Parathasarthi have all the elements of President-General Pervez Musharraf’s four-point formula, Prime Minister Manmohan Singh’s efforts to make the border irrelevant by facilitating easy cross-LOC movement and the finer elements covered in the most significant dialogues process between India and Pakistan as represented by S K Lamba and Tariq Aziz. The proposed solutions were nearly identical to what is discussed today, the progress made was real, and there was political will to address the issues squarely. But all of this was dropped because of domestic developments – in 1975 in India, the Emergency; and in Pakistan in 2007 the lawyers’ agitation following the sacking of the Chief Justice.

Some glaring factual errors in this book dim the gloss from the otherwise honest recollections of a veteran. Jyoti Basu’s declaration that the CPI (M) committed a historical blunder was after the party’s central committee’s decision not to join the United Front government in 1996. Verghese confuses this with the political instability following Jayalalitha’s withdrawal of support to the NDA government in 1999. In the first Janata Government headed by Moraji Desai, Madhu Dandavate was the Railways Minister and not George Fernandes. There are quite a few avoidable errors such as this, which could have been avoided with better editing.

–A S Panneerselvan is executive director, Panos South Asia, and lives in Chennai.