In Kashmir, individual agency is prey to violence from both state and non-state actors. 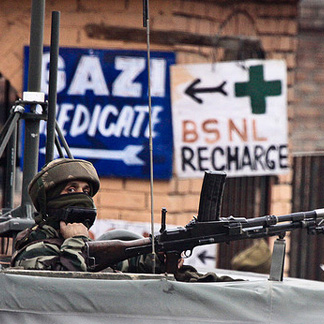 In any conflict zone, it is the common person who pays the greatest price and becomes a casualty in one way or another. Since 1989, ordinary Kashmiris have often found themselves suspended between two guns – one wielded by the state; the other by non-state actors. During election processes – which remain deeply contentious in Kashmir – people find themselves in a Catch-22 scenario, forced to choose between casting a vote for ‘better governance’ or boycotting the process in order to ‘honour the sacrifices’ made in the struggle for self-determination. Recent elections were no exception. For Kashmiris, not only was it a battle between the ballot and the boycott, it was also a battle between forgetfulness and memory: violence, aggression, rhetoric, and deceitful politics have been used to lure potential voters, or alternately, coerce them to stay away from the process in the name of resistance.

In the state of Jammu & Kashmir, six parliamentary constituencies held polls in the recently concluded Indian General Elections. Unfortunately, Kashmir lost many civilians and lower-rung political activists to the region’s vicious cycle of violence. On 30 April, at the end of polling in the sensitive constituency of Srinagar-Budgam-Ganderbal, a young mason, Bashir Ahmad Bhat, lost his life as a result of the Central Reserve Police Force opening fire on a group of youths in the Nawakadal area of Srinagar. The State Human Rights Commission termed it an “extra-judicial killing”. Twenty-eight-year-old government school teacher, Zia-ul-Haq, meanwhile, also lost his life through no fault of his own. During the election, state government employees were mobilised to work as polling officers. Deployed on poll duty in south Kashmir’s Shopian district, the vehicle Haq was travelling in was attacked by suspected militants. If Haq had refused to fulfill his state-sanctioned duty, he may have lost his job. He acquiesced to save his job, though instead lost his life.

Other than innocent civilians and low-level government employees, Panchs, Sarpanchs, and Numberdars likewise provided a soft target, with as many as four killed by unidentified gunmen ahead of elections. While so-called ‘mainstream’ pro-India politicians often refer to these village heads as ‘symbols of democracy’, anti-India leaders dub them ‘police informers’. As recent events demonstrate, without adequate provision of security by the state they are left desperately vulnerable to attacks.

Sadly, in today’s Kashmir, the degree to which these deaths are of concern depends on one’s ideological outlook. There is a section of radicals in Kashmir for whom it is remarkably easy to pronounce the guilt of innocents by declaring them ‘collaborators’ and ‘traitors’. The fact that these killings fail to be condemned amounts to what can be regarded as a deliberate and tactical silence. Indeed, while it is convenient for some to assert that individuals have a clear choice to forgo jobs wherein they could face ethical dilemmas, those doing so are quick to justify their own predicaments.

This opens up interesting, though largely futile questions. Who is a ‘collaborator’ in Kashmir? Those who hold an Indian passport? Those who work in the police department? Journalists who work in Kashmir-based newspapers reliant on advertisements placed by the state and/or New Delhi governments? Or those, such as Ranji cricketers, who play in the Indian Premier League? The silence maintained on mindless killings (from whichever side) is borderline criminal to say the least. According to reasonable estimates, more than 80,000 civilians have been killed in Jammu & Kashmir since the popular anti-India rebellion erupted in 1989.

Faulty products
Given the pre-poll violence and intimidation, the congratulatory messages put forth by the resistance leadership for the public’s ‘poll boycott’ are somewhat ironic. One would have respected their praise to the people for staying away from the ‘sham process of elections’ had there been an absence of pre-poll violence, and had the resistance leadership gracefully acknowledged the failure of their boycott calls in 2008 assembly elections. Indeed, low voter turnout was a mixture of an escalation in violent attacks and a genuine poll boycott.

Ironic too, are India’s claims that elections in the region constitute a democratic success and a validation of Indian administration. During the election process, the government placed undue restrictions on the movement of pro-freedom leaders, while at least 600 youths were detained and taken into preventive custody in Srinagar, central Kashmir’s Budgam district, and north Kashmir’s Baramulla district. Moreover, the holding of elections in the presence of 600,000 Indian soldiers raises serious questions over the credibility of the process.

While the Indian state attempts to sell itself to Kashmiris as the world’s ‘most evolved and largest democracy’, violence and repression have, sadly, too often become its tools. Indeed, if the so-called mainstream ‘pro-India’ politicians enjoy their right to go before the people of Kashmir, organise election rallies, and convince people to cast votes, the question remains unanswered as to why the same right isn’t enjoyed by the pro-freedom leadership. This is a travesty of justice and invites concern about the democratic ideal being sold in Kashmir.

If one analyses events in relation to Kashmiri students living in other Indian states, discomforting conclusions concerning India’s democracy are difficult to avoid. Only two months back, as many as 67 Kashmiri students were suspended by authorities at Meerut University in Uttar Pradesh for the ‘crime’ of cheering for Pakistan in a cricket match against India. In a similar example, in Greater Noida, three Kashmiri students were severely beaten and forced to shout anti-Pakistan slogans. These incidents send a clear message to Kashmiris: chant ‘Jai Hind’, raise anti-Pakistan slogans, don’t have an opinion, and don’t speak your mind.

Azaadi: redux
Why shouldn’t the people of Kashmir be left alone and allowed to decide on their own whether to boycott the ballot or participate in the process? Why should state actors use violence, aggression, arbitrary arrests, torture, threats and military presence to make Kashmiris tow a particular line? And why should non-state actors use guns and bullets to make Kashmiris stay away from exercising their choice to participate in polls?

In this context, state-sponsored, organised violence results in the death of a mason named Bashir in Srinagar; violence emerging from non-state actors devours a teacher named Zia in Shopian. Where is the freedom of the common person in Kashmir? Why isn’t an individual left alone and set free to decide whether to cast a vote or boycott the process?

A common Kashmiri’s freedom, sadly, is as elusive as ever.

~ Gowhar Geelani is a journalist and columnist. He has served as Editor at Deutsche Welle in Germany, and was selected as Munich Young Leader 2014. His pieces regularly appear in Dawn.com and many Kashmir-based English dailies.