Beyond development and diversity

Historian Tsering Shakya on the state of contemporary Tibet. 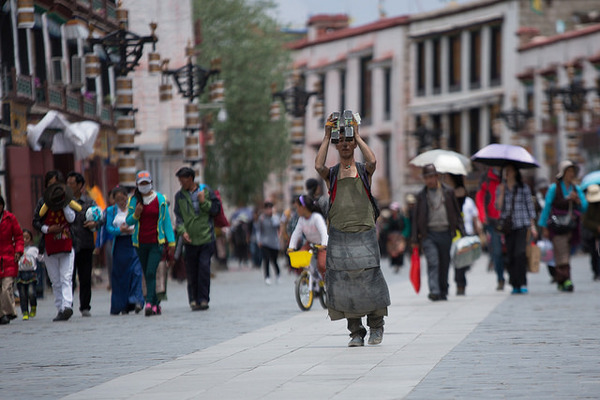 Among the many consequences of the breathless media coverage of China as the new global superpower is the diminishing attention that Tibet seems to get. Reporting on grand economic plans like the Belt and Road Initiative (BRI) largely caters to geopolitical or macroeconomic interests, rarely delving into the particulars of places like Tibet that also feature in the scheme.

The expanding reach of Chinese money and power has seen both triumphalist as well as critical reporting around the world. But how is Tibet responding to these shifts in the region’s political economy? In this interview, Tsering Shakya, a leading historian of Tibet, talks to us about its place in the BRI, some of Tibet’s most exciting dissident individuals and why anthropologists of Tibet should read more history.

Himal Southasian: While Tibet is often touted as China’s bridge to Southasia, the country’s vision for the Belt and Road Initiative views Tibet mainly as a link to Nepal, assigning the chief responsibility of connecting Southasia to the Yunnan Province. In that context, how do you assess Tibet’s place in the BRI framework?

Tsering Shakya: There are some imperatives that place Tibet within the core objective of the Belt and Road strategy. There is a growing disparity in development between the coastal regions, and Tibet and the Western provinces; they remain the poorest in all economic and social indices.  Tibet’s economy has mostly depended on state subsidies. Under the Western Development project, initiated by President Hu Jintao, China has focused on developing infrastructure, roads, railway and power supply to facilitate the industrialisation of the area. China sees this as a way of addressing inequalities between the regions. This unequal development – and the geographical, cultural and ethnic divide between rest of China and Tibet (and other areas with minority groups) – is seen as accentuating local nationalisms, manifesting in incidents like protests.

There is a tendency to see what is happening in Tibet, and to some degree in Xinjiang, as a necessary consequence of modernisation and development. The Chinese state has been successful in projecting Tibetan and Uyghur people as backward populations resisting development. So there is a growing backlash in China against what might be best termed religion-based identity politics. China has successfully used this to its advantage, portraying the situation in Tibet and Xinjiang as part of the fight against the global rise of religious fundamentalism. However, there is a big difference in how the two communities are treated: Beijing is relatively soft on Tibetan Buddhists compared to Xinjiang Muslims. This is because Tibetans are not seen as the same kind of security threat as Uyghurs are and because of the growing popularity of Tibetan Buddhism.

HSA: How has the BRI been received by various segments of Tibetan society? And what have been the major arguments made by Tibetans for and against the project?

TS: It is almost impossible to gauge public opinion in Tibet regarding state policies because of the lack of public space to voice grievances. Any overt opposition to state policy is met with arrest. The official media portrays unanimous support to any state-led initiatives. Tibetans in civil service will be ostensibly pro-OBOR [One Belt One Road]. Some independent traders and merchants may be looking forward to new economic opportunities brought by the increased accessibility that trains, roads and infrastructure provide. China’s economic rise has led to a considerable increase in the income of Tibetans. But this is mostly sustained by state subsidies and state-sector employment. At the same time, the development of the extractive industry and devaluation of agriculture has had a negative impact on the Tibetan population.

There is also a great deal of anxiety amongst all sections of the Tibetan community, mostly concerning the issue of identity. There is a sense that growing geographical and socio-economic integration is leading to the degradation of Tibetan culture and the erosion of autonomy. This is manifest in the concerns about the decline in the use of the Tibetan language. In the early years of China’s reform period in the 1980s, the Chinese Communist Party leaders encouraged the Tibet Autonomous Region (TAR) to develop local laws to protect itself from outside pressure, such as laws requiring Tibetan to be the language of administration in the region. Today, such laws have very little relevance and are openly flaunted. The sheer speed and force of economic change is making redundant any talk of autonomy. In most urban areas of TAR, Tibetans cannot function without the knowledge of Mandarin, which is required for education and employment.

HSA: What is your assessment of the state of scholarship on Tibet?

TS: It has become virtually impossible to conduct open field research in Tibet over the last two decades; and, coupled with the fear of Chinese retribution, this has prevented the fostering of genuinely independent research in Tibet, particularly research that focuses on contemporary development.

Sometimes, academic research inadvertently serves the state narrative. For example, it has become fashionable for some anthropologists to posit that there is no singular Tibet or Tibetan language and identity, as though this is a new or profound discovery. But this denies the Tibetans their right to construct a singular identity in opposition to others. In fact, Tibetan nationalism and the construction of a common Tibetan identity through popular culture, Buddhism and a shared history has been an interesting development.

The Chinese state has developed a strategy to counter this trend by facilitating ‘regionalism’ and ‘localism’ within Tibet.  In the guise of the stimulating local economy through tourism, the state encourages organising local festivals and displays of local customs to attract tourists. Meanwhile, displays of the pan-Tibetan identity is discouraged. The academic stance that there is no singular Tibet has given a perfect alibi for this statist view of Tibetan identity, language and culture –  that it is fragmented and devoid of commonality.

Doing scholarship on local/regional identity is tricky; if you are not critical of the categories and definitions you use, you might end up reproducing state-centric demarcations of difference and cultural ‘diversity’. Anthropologists therefore need to be more historical – read archives and understand the history of ethnic classification models in China – and use the results of contemporary field work in a critical way.

HSA: Can you talk about some of the most interesting Tibetan artists and intellectuals that we should be following?

TS: One of the most critical voices coming from Tibet is that of the Tibetan filmmaker Pema Tseden. In his acclaimed Old Dog and the award-winning Tharlo, he looks at people living at the edge of China’s economic development, exploring the issue of identity and the cost of development to human relations. Tseden is not so much of an open dissenter but someone who encourages critical introspection. Contemporary Tibetan filmmakers like him can articulate the reality of contemporary Tibet in the language of international cinema. His films are screened at Venice and Cannes alongside top auteurs, and more and more young Tibetan filmmakers are attending film festivals around the world.

Similarly, new Tibetan popular music is amazingly defiant. Recent songs by the rap group Anu have inspired Tibetans both inside and outside the region. Their song ‘Fly’ was groundbreaking both in terms of lyrics and visual images. Another, titled ‘It’s only a Game’, has a defiant attitude, but also draws from the power of Tibetan tradition as a source of nourishment.

Unfortunately, much of Tibetan diaspora has become formulaic, and lacks ingenuity and creativity. Their rhetoric is confined to social media and the personality politics of a small, non-representative group of the population. Any dissenting voices are socially ostracised and barred from the media that is controlled by the exile establishment. One of the most articulate intellectuals in exile is Jamyang Norbu, but he is now barred from appearing on Tibetan-language radio stations like Radio Free Asia (RFA).

More importantly, there is a sense of impotence brought about by the failure of the Middle Way policy, which has not softened China’s position on Tibet. This malaise is compounded by an ageing Dalai Lama, the growing power of China to censure any country or groups who make even the vaguest statement about Tibet, and international leaders like Donald Trump and Narendra Modi who sideline human rights, civil rights and environmental issues.  For them, questions about Tibet and human rights are irritants rather than issues that need to be addressed. Curiously, Trump is the only US president who has not met the Dalai Lama.

HSA: The fire in Lhasa’s Jokhang Temple in February 2018 once again reminded us of the enduring political power of cultural sites. How should we think about the role of Buddhism in the politics of Tibet today?

TS: The response to the Jokhang fire, from all parts of society in the three traditional regions of Tibet – Amdo, Kham and U-Tsang – show the centrality of Tibetan Buddhism to its identity. But the fire also reveals how information circulates in Tibet, the mistrust of official channels, the primacy of social media and its censorship. The information spreads quickly, but it is just as easily snuffed out.

HSA: How do we then look at the impact of the Chinese state’s appropriating, almost curating the scope of, religion and culture in Tibet, with places like Jokhang Temple having been reduced from living cultural spaces to opaque, ornamental museums?

TS: Curating is a good way of putting it. It changes the way in which people think about themselves, the way they think about custom and religion. It’s a way in which you become increasingly estranged from yourself and your culture. Imagine an African American person looking at a museum of African art.

HSA: In an interview ten years ago, you noted an emerging cultural divide in the Tibetan art world between traditionalists and modernists, with the former considering certain new expressions of art and literature as rejection of Tibet and as imitations of the West. What does the cultural scene of Tibet look like today?

TS: I think the earlier divide between the traditionalists and modernists has more or less dissipated over time.  In the 1980s, it was a genuine issue emerging out of the horrors of the Cultural Revolution. People were searching for answers to questions like why Tibet was conquered and colonised. Some blamed the past and tradition for the lack of social change and saw modernisation as the answer. Today, I don’t see this kind of anxiety in Tibet. There is an acceptance and accommodation. Both the traditional and contemporary exist side by side, and Tibetans live and move between urban and rural areas, what we might think of as traditional and modern contexts, seamlessly.

~Tsering Shakya is a historian of Tibet and the author of The Dragon in the Land of Snows: A history of modern Tibet since 1947. He teaches at the Institute for Asian Research, University of British Columbia.