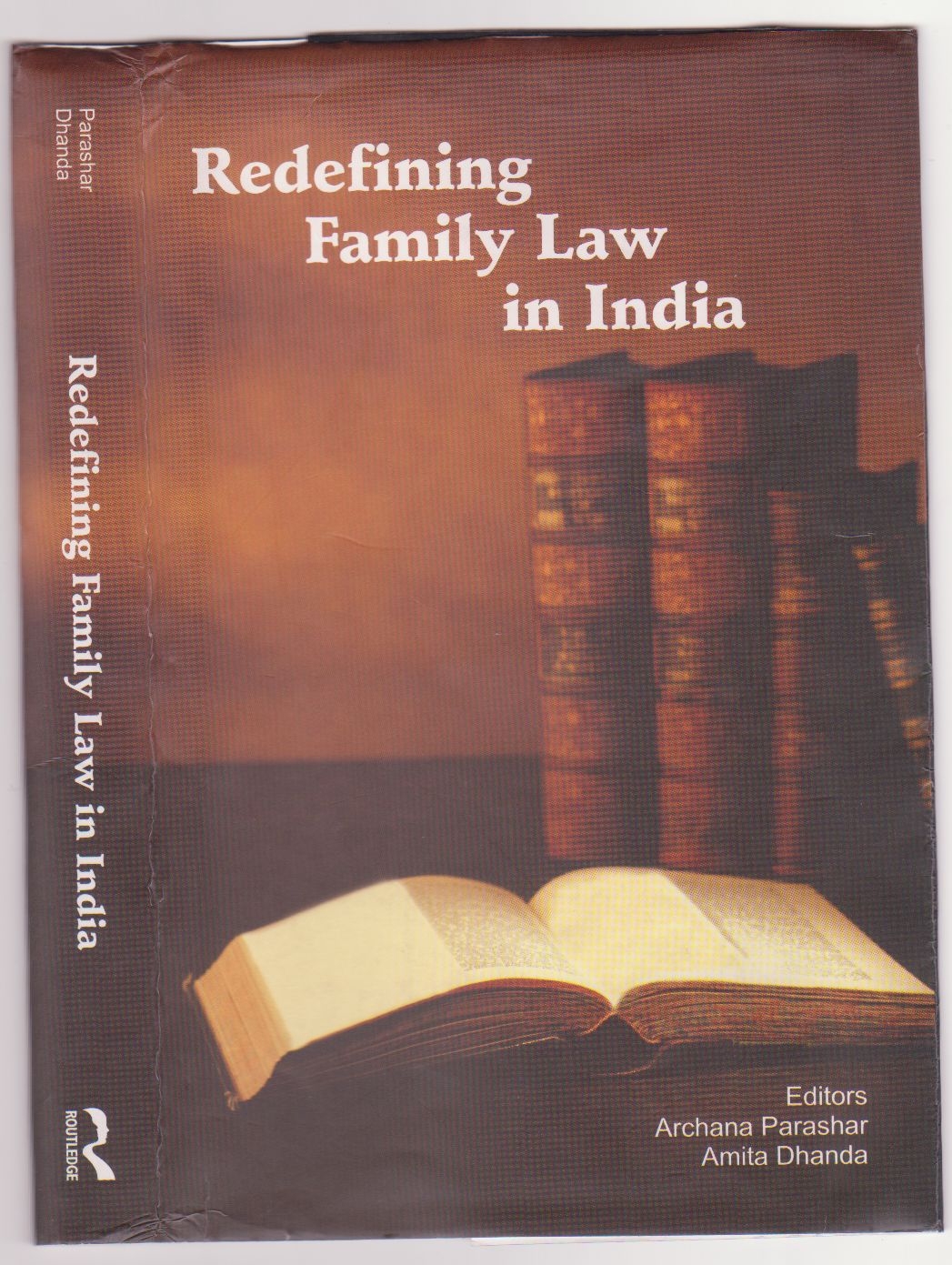 The realm of family law inherently carries with it a huge burden of history, given that it essentially covers interpersonal relationships within a family unit, and the influence this has on the experiences of larger communities. However, in recent years any discussion or debate on family law has largely focused almost completely on women’s rights, a change that has led to a handful of crucial acknowledgements of women’s rights in India.

Historically, women’s rights – whether over their own bodies, or to property, maintenance, guardianship or custody of their children – have been determined by patriarchal laws handed down through the centuries (Manu’s codification of conduct has perhaps been the most influential body of work), and have been further hardened by rigid social customs. Postcolonial India, with its modern constitutional system founded on principles of equity, was expected to dispel the cobwebs of a patriarchal mindset, and look at women’s rights from a more equitable perspective.

For years this did not happen, largely due to the hangover of the colonial preference for retaining a community’s so-called ‘religious personal laws’, or RPLs, over the creation of an independent and uniform set of laws. The result of this was that family laws continued to remain discriminatory towards women. Even as Indian lawmakers were reluctant to interfere in what they saw as a personal sphere, archaic medieval English laws such as the Restitution of Conjugal Rights, which turned a woman into her husband’s property, found their way into the post-Independence legal system. Significantly, this in particular was a law that had been contested during colonial times, but was eventually codified in Hindu Family Law.

In recent years, largely due to decades of struggle, the courts have started to acknowledge that there are gender inequities inherent in the legal and judicial system. Much of these decisions have come about under the auspices of family law, including in awarding guardianship rights to mothers, something that was previously considered unthinkable. This judicial acknowledgement has been crucial, given that Indian society at large persistently refuses to accept a mother as a child’s guardian in crucial matters such as school-admission applications or bank forms, if the father is living. In parallel, in 2005 lawmakers granted the right to women to become heir to a portion of their family’s property. Today, through a court order, it is possible for a married daughter to initiate a suit to claim part of her father’s house.

North Indian hegemony
These are relatively recent victories for women’s entitlements, but as Redefining Family Law in India argues, it is hardly enough. Even in these ‘enlightened’ times, after all, the ranks of voiceless women include not just overworked housewives, but also women who have been pushed to the margins of society – sex workers, bonded labourers, women abandoned by their husbands, and rural women for whom hierarchical laws are still of overwhelming importance.

The book, a collection of 12 well-researched essays by legal theoreticians, historians and social activists, traces the impact of discriminatory laws in India, and ultimately makes a case for progress through the “twin tools of reflection and responsibility”. The editors, Archana Parashar and Amita Dhanda, both legal academics, favour a family-law model based on the legal theories that are emerging from American and European universities. These relate not just to women’s rights, but also to other complex issues such as abortion and child rights.

Current adoption and custody laws, Parashar and Dhanda point out, do not always consider the best interests of the child. But the most significant impediment to change, they warn, could be the influence of the religious personal laws. Hence, this book pushes for a stepped-up discourse on the current laws, with an eye towards making them more flexible and independent of RPLs, to be implemented by judicial mandate. Parashar makes the point that law is an amalgam of legislative and judicial acts. Therefore, even if appropriate legislative changes are made, the most precisely formulated rules still require interpretation. Whether the legislation gives wide discretion to the judges or lays down extremely strict rules, the courts nevertheless remain the institutional mechanism in resolving disputes about the meaning of law, because ultimately they are the ones who make the decisions.

The essays in Redefining Family Law raise two questions of particular importance. First, can religious personal laws be dismissed altogether? And second, how much actual progress has been made in family law? The first necessitates looking at how RPLs came to govern these laws. In Indian societies all over, tradition continues to matter enormously, even amongst the Westernised groups. Customs and their usage, however discriminatory, have been handed down for hundreds of years, and cannot be merely wished away.

Even though religion is thought to tie together communities, family law has long been held hostage to North Indian hegemony. This is reflected, for example, in the Hindu Marriage Act. This legislation is critiqued in this volume by Patricia Uberoi who discusses the ‘prohibited relationship’ clauses in North and South India, which exhibit two distinct systems of kinship and marriage. The former, governed by Indo-Aryan custom, allows for no marriage between kin; the latter, governed by Dravidian cultural mores, traditionally allows for, if not actually encouraging, cross-cousin marriage or even uncle-niece marriages.

The Vedas were considered sacrosanct, and presented a problem for legislators while enacting the Hindu Marriage Act and the Special Marriage Act during the mid 1950s, to conform to an evolving modernistic society. Some scholars, who disagreed with the shastras, did say that the writing had no relevance in a modern society, noting that it was senseless to prohibit marriage between a Kashmiri Brahmin and a Tamil Brahmin. But they had few listeners. But, when formulated, both acts took into consideration only marriage rules that applied to the northern states – on grounds of self-professed eugenics as much as tradition.

The ‘degrees’ of prohibition in both were relaxed in 1963, but only with the proviso of “where custom and usage allows it”. This amendment has been described in Redefining Family Law as a “backdoor concession” to marriage practices by South Indian communities, while North Indian parliamentarians continue to hold Dravidian matrimonial practices abhorrent. In this work, Uberoi’s essay looks at the north-south divide from a gender perspective, particularly focusing on various perceptions of South India’s superior track record on issues of social development and gender equity, where female literacy rates, female-male ratios and health indices show healthier trends than those of the northern or northwestern states.

The colonial rulers preferred to leave religious laws undisturbed, whether Hindu or Muslim. This was partially in order to engender the least resistance to their rule, but also due to the influence of the liberal humanist thought of philosophers John Locke and David Hume, who proposed a doctrine of division between private and public space, with each considered sacrosanct. For the English administrators, family matters constituted private space. Somewhat unsurprisingly, postcolonial India fostered the hangover. In elite circles, the predominant question seemed to be: Why upset equations unnecessarily? And so, in divorce suits women lost out, custody of children was given to the father, and maintenance sanctioned was meagre. In addition, a woman could be thrown out of her matrimonial home, and she had little or no rights to property, either in her husband’s home or her father’s, especially if she had brothers.

Seeking recourse
It would be easy to say that what changes there have been with regards to gender rights in India have come about with the increased economic independence of women. But in fact, this transition was never black and white, even during the ‘progressive’ 1960s and 1970s. There have been reports, for instance, of female officers with the Indian Administrative Service (IAS) who were abused by their husbands and subsequently unable to attain justice in court. But economic independence did give women a stronger voice, and did succeed in empowering them. Over the past decade, the results of prolonged court battles have been and continue to be felt, with women able to claim victories regarding custody, guardianship and right to maintenance – signals that the law is finally recognising the claims of women. Judicial activism is also playing its part, albeit after years of caution.

Two recent instances of legislation, both from 2005, have done much to empower the women of India – the Protection of Women against Domestic Violence Act, and the amendment to the Hindu Succession Act of 1956. Poonam Saxena, in her essay in this volume titled “Succession Laws and Gender Justice”, discusses the latter, which made a son and daughter equal legal heirs. But Saxena argues that the amendment in fact created an anomalous situation, in which a married daughter suddenly became a member of two joint families – her father’s and her husband’s. On the other hand, Hindu law very clearly states that a woman ceases to be a member of her father’s family at the time of marriage. Instead of allowing women to become equal heirs, Saxena believes that it would be simpler to do away with the joint-family system altogether.

The other piece of legislation, regarding domestic violence, has been welcomed as a major breakthrough for women seeking redress. Violence against women, especially within the home, remains of horrific proportions, and for years millions of women have had to silently put up with abuse with little hope of relief. The Protection of Women against Domestic Violence Act implicitly recognises this, and goes well beyond the previous weak anti-dowry laws in its wide definition of domestic violence, which now covers physical, mental, economic and sexual abuse. Since 2005, this redefinition has empowered women to take action not simply against abusive husbands, but against any relative or in-law who insults or abuses her in any way. The law departs from earlier penal provisions of punishment and arrest without warrant, to emphasise the positive civil rights of protection and injunction. Moreover, this is a secular legislation, bringing within its protective cover women from all religions.

While laudatory, however, the trend towards the adoption of progressive legislation is also not enough. The major problem in seeking recourse to the law, notes Redefining Family Law, is that most abused women do not know how to use these laws. More generally, despite the presence of non-government organisations that do some good work in this field, women from lower stratum of society often have no resources to fight their case from the lower to the higher courts. The question of setting up special or separate courts to deal with abused and traumatised women crops up frequently, but the wisdom of doing so remains debatable. Those in favour of the idea argue that such courts would ensure a speedy trial and justice, while at the same time clearing the trial courts of the mountain of cases relating to domestic violence. On the other hand, the idea of sequestering women’s issues, especially regarding violence, could be detrimental to women’s interests in the long run.

Today’s rapidly changing society, including the emergence of strong women’s voices, demands that a host of laws need to be continually evaluated afresh, to assure their ongoing relevance and equity. Given both the recent advances and continued stagnation with regards to the acknowledgement of women’s rights in India, it remains crucial that women come out of their shells everywhere, and each according to her capacity. Women need to discard centuries of stifling, as well as the suggestion that they have to compromise because they cannot win in a male-dominated society. Women must work to redefine the laws of the land, and then use those laws to seek justice for themselves.

~ Madhumita Bose is a journalist, and formerly an editor with Bussiness India magazine.