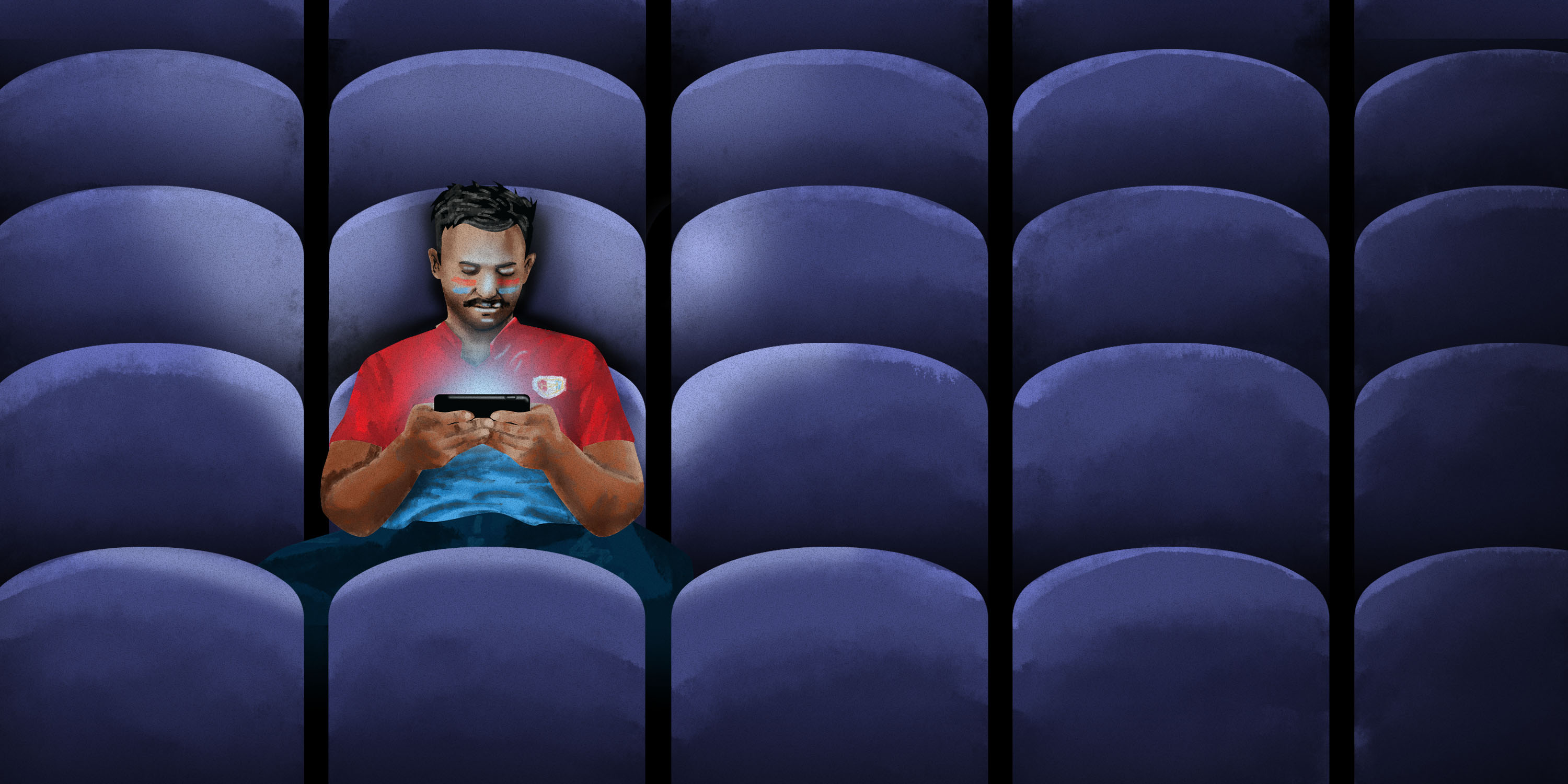 When a pandemic takes grip, even cricket knows when to stop buying its own hype.

(This article is part of our special series Unmasking Southasia: The pandemic issue. You can read the editorial note to the series here.)

The pace at which it shut down across the world was staggering.

In Colombo, the England Test side were in the midst of their weeks-long preparation for a Test series against Sri Lanka – a tour their backroom staff had spent months planning for. At the start of their four-day warm-up match at the P Sara Oval on 12 March 2020, hopes remained high that the tour would be played as scheduled. But news on the spread of the pandemic in England quickly turned dire. On the morning of 13 March, two days after COVID-19 was declared a pandemic by the World Health Organization, England’s players told team management they would prefer to return home, fearing not only for their families, but also the closing of international borders, which would leave the team stranded abroad. England captain Joe Root was fielding that afternoon, when he was asked to leave the ground to be told the tour was off. Minutes later, official confirmation of the tour’s abandonment came. Within an hour, the ground had been enclosed with covers, kit bags had been packed away, and an entire sport was mothballed.

In the early weeks of global lockdowns, while dry rations were being bought in bulk and day-wage earners began to face a multitude of hardships, cricket’s absence did feel trivial. Of what consequence was a bat-and-ball game when the health of millions, and the livelihoods of many more, were cast into uncertainty? In Pakistan, the nation’s flagship T20 franchise tournament (the Pakistan Super League) was nearing its climax in mid-March. The tournament was being played within Pakistan in its entirety for the first time, as high-profile international cricket had been halted in the country since the 2009 Lahore attack, when a bus carrying the Sri Lanka national team came under gunfire by a militant group. But as Pakistan became the first Southasian country to see a rapid rise in COVID-19 cases, the nation’s cricket board was forced to postpone the tournament with only four matches left to play. The games were eventually resumed in November. In India, even the almighty Indian Premier League (IPL) – the most lucrative annual tournament cricket has ever seen – was forced into a postponement. There was no significant protest from fans. Most had bigger concerns.

Cricket fans were suddenly contending with a strange reality: the absence of their favourite diversion at the moment they most needed one.

And yet, following the initial shocks of the pandemic’s onset, a gnawing sense of loss descended. Even in the best of times, cricket is Southasia’s foremost pan-regional passion – Sachin Tendulkar and Wasim Akram inspiring more adulation even than Shah Rukh Khan or Kareena Kapoor (it’s instructive that Bollywood halts major releases during the IPL, and that Khan himself owns an IPL team). Cricket fans were suddenly contending with a strange reality: the absence of their favourite diversion at the moment they most needed one, and the dearth of the indulgence they ordinarily fought to make time for, just when free time was forced upon them.

Over the following weeks, however, cricket began to seep back into life. Nostalgia stepped into the void left by live cricket, as broadcasters across the region scrambled to buy rights for memorable games from the 1990s – an era considered by a significant number of Southasian fans to be a golden age – while media outlets dove headlong into interview features from former players, and online publications even sought to recreate hype around great matches from decades past. In the absence of nationalistic tensions that often inform the viewing of live games, the nostalgia project perhaps even saw a greater cross-border appreciation of opposition players and cricket cultures, at least on social media.

Perhaps, without the lull in action the pandemic created, cricket may also have failed to introspect as it did in the wake of the global Black Lives Matter protests.

Cricket also began to reclaim its place in Southasian life by unusual means. Players themselves began spurring this regional exchange of cricketing ideas, anecdotes and wisdom, starting interview series with players from neighbouring nations for their vast social media followings. Bangladesh opener Tamim Iqbal and India spinner R Ashwin were prolific on Instagram, and later on Youtube. Ashwin’s interviews were particularly fascinating, with him touching on topics far bigger and more profound than merely the game itself. Broaching politics and ethnic relations with Sri Lankan great Muttiah Muralitharan – both speaking their native Tamil – Ashwin had Murali dwelling on what it was like to be a Tamil in the mostly-Sinhalese cricket system during the height of the country’s civil war. Murali can be cagey with journalists, but he was bracingly open with a fellow sportsperson, saying at one point: “See, the Sinhalese people get angry or emotional. Then they react. And then they repent. Sinhalese have that kind of a personality… I stayed in a hostel with Sinhalese people for 12 years, so that’s how I learned how I should move with them.”

While the likes of Ashwin and Iqbal were becoming de-facto journalists, elsewhere on social media, even more surprising transformations took shape. Australia opener David Warner was once nicknamed ‘the bull’ for his aggressive on-field behaviour, and the ferocity with which he meted out verbal abuse on opponents. In 2015, he had even drawn fire for yelling “speak English” at India batsman Rohit Sharma, with whom he was having an on-field exchange, and who Warner claimed was speaking to him in Hindi. And yet, the speed with which Warner became a raging success on Indian TikTok during lockdown was almost staggering. With the help of wife Candice and his two young daughters, Warner danced and lip-synced his way to 4.8 million followers.

Worst hit, perhaps, has been the women’s cricket schedule.

Perhaps, without the lull in action the pandemic created, cricket may also have failed to introspect as it did in the wake of the global Black Lives Matter protests. Among the biggest revelations of the pandemic months was former West Indies captain Darren Sammy’s suggestions that he had been nicknamed ‘kalu’ by his IPL teammates in 2013. He had not known that the word sometimes had a derogatory connotation, he said, nor in fact that it even meant ‘black’. No official sanctions were dealt over the issue, nor was there a public apology, but in capturing the cricket establishment’s attention, Sammy did create discussion over the use of such terms in Southasia. Where is the line between colourism and racism? And should colourism be tolerated in a professional environment anyway, when it is likely it comes from the same place as racism? In South Africa and England, dozens of Black and Asian players voiced their grievances with systemic racism in cricket; those conversations are still ongoing, as players of colour lobby more fearlessly than ever for lasting change.

Although the months-long layoff was not altogether bad for the sport, the resumption of high-profile cricket over the past several months has laid many structural inequalities bare. Mostly these are economic. While mandatory quarantine periods remain imposed, and commercial flights largely remain grounded, the logistics of international touring have become both more difficult and more expensive. The setting up and maintenance of bio-secure bubbles for entire playing squads has also seen operational costs skyrocket. Until September, only the wealthy England and Wales Cricket Board (ECB) had been able to host international cricket, despite England’s infection rates having been worse than in much of the cricket-playing world. Sri Lanka, which initially had the pandemic under control, has been begging for teams to visit, but both India and Bangladesh have postponed their tours to the island.

That most matches played so far have been behind closed doors – no fans in attendance – has made matches seem sterile, and bloodless.

Worst hit, perhaps, has been the women’s cricket schedule. While the International Cricket Council (ICC) took weeks over the postponement of the Mens’ T20 World Cup, scheduled for October 2020, the decision to postpone the Women’s ODI World Cup, originally set for early 2021, seemed to require less than 24 hours of deliberation. There was some women’s cricket in the last few months, with West Indies going to England for a tour in late September, but with the World Cup now not scheduled until 2022, the remaining teams no longer have a pinnacle event to build towards. Most sides will not play meaningful international cricket until the end of 2020, having last played in early March. This length of hiatus is worrying for any elite sportsperson.

There are other ways in which the pandemic has changed cricket, but these are largely temporary. Players can no longer apply saliva to the cricket ball, which is now considered a vector of disease. The ICC hopes to relax these rules at first opportunity, however, as bowlers have complained that sweat – which they are allowed to use on the ball – does not achieve the same effect in helping move the ball through the air. That most matches played so far have been behind closed doors – no fans in attendance – has made matches seem sterile, and bloodless. But perhaps this is a good reminder for viewers that although cricket has stintingly returned to our screens, the planet has not yet regained normalcy.

Cricket has made some progress in the past few months. The IPL was hosted in the United Arab Emirates over September and October, the Caribbean Premier League has also concluded, and Sri Lanka has inaugurated its Lanka Premier League. On the international front, Australia and New Zealand have begun to host matches with spectators in the stands. But these resumptions have not been without serious incident. England’s tour of South Africa was cut short when three South Africa players tested positive for COVID-19, before two staff members at the hotel the teams were ‘bubbling’ in, also returned positive tests. The New Zealand government threatened to send the Pakistan team home in December when team members were found to have mingled and shared food in the hallways during quarantine, breaking isolation rules. As cricket returns to our screens, and to select bio-secure venues around the world, it must continue to tread lightly.

Note from the editors

This special series will be available for free. To help us continue our independent, interesting and irreverent coverage of Southasia, do check out our membership plans and support our work!

Andrew Fidel Fernando is author of the award-winning travel book 'Upon A Sleepless Isle', and is ESPNcricinfo’s Sri Lanka Correspondent.