Skip to content
Southasiasphere > #BlackLivesMatter in Southasia, the state of opposition, and more

#BlackLivesMatter in Southasia, the state of opposition, and more

Southasiasphere: Issue #7- Updates and analysis from around the region. 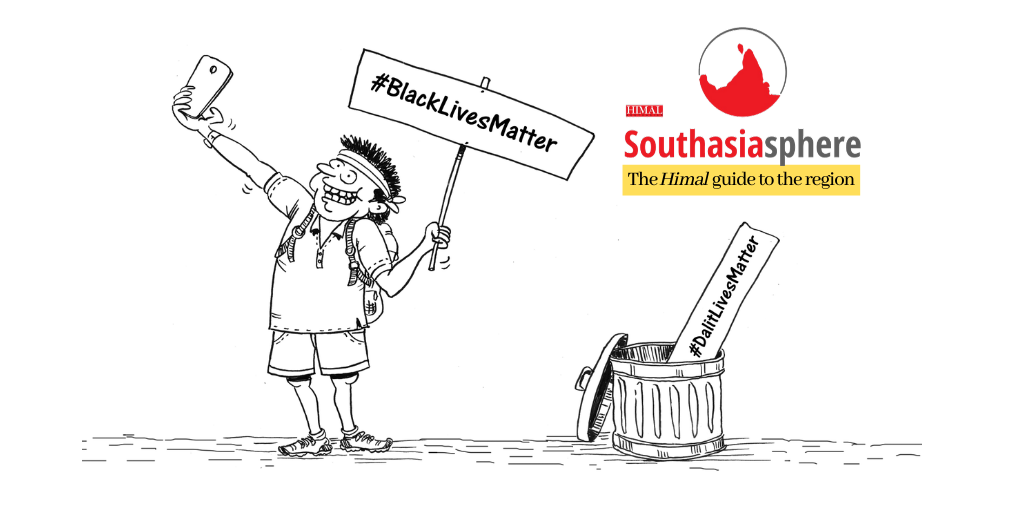 Southasia responds to #BlackLivesMatter and its own police atrocities

Conversations on race, state violence and identity following the police murder of George Floyd in Minneapolis and subsequent protests have spurred debates among Southasians as well. Across Southasia, #BlackLivesMatter (BLM) has been trending as people engaged with debates on caste, police brutality and longstanding structural violence.

Some in the region have protested in solidarity with the BLM movement, including in Hyderabad, Karachi and Colombo (where over 50 people including a lawyer were violently arrested by police, citing COVID-19 health regulations). However, many have used the moment to reflect on how state and non-state institutions in Southasia have treated their own minorities and called out the hypocrisy of those who expressed solidarity with BLM but not the victims of police brutality in their own countries.

In Nepal, following the recent killing of young Dalit men, many have started organising online under the hashtag #DalitLivesMatter. Activists in India questioned why police violence and caste atrocities did not receive the same attention. The country has seen widespread impunity for post-lockdown police aggression, as the police reportedly assaulted at least 173 persons – some of which resulted in deaths – in just the first week. In the months before lockdown, state violence was particularly visible against those protesting the 2019 Citizenship Amendment Act (CAA).

Activists in India censured public figures who expressed solidarity for BLM, but didn’t question police violence and caste atrocities back home. The country has seen widespread impunity for post-lockdown police aggression, as the police reportedly assaulted at least 173 persons – some of which resulted in deaths – in just the first week. In the months before lockdown, state violence was particularly visible against those protesting the Citizenship Amendment Act (CAA), 2019.

In Sri Lanka, two recent incidents of police brutality were discussed on Twitter under the hashtags #JusticeForThariq and #JusticeforKavinda, with activists again asking why these incidents received less attention locally than protests in the US. Sri Lanka’s Human Rights Commission has described the use of torture as ‘routine’ and its former commissioner noted that victims of police brutality were more likely to be of a lower socioeconomic class background.

In Myanmar, activists have started a ‘Don’t Call Me Kalar’ online campaign to start a conversation on the discriminatory treatment of ethnic minorities in the Bamar-majority country.

Meanwhile, Afghans criticised Tehran’s support of BLM (Iran’s foreign minister Javad Zarif used the hashtag to censure the Trump administration) while failing to address the deaths of three Afghan refugees who were reportedly shot at by Iranian police before being killed in a car blaze.

Among the many impacts of the escalating COVID-19 outbreak is a disruption in the day-to-day modes of domestic politics. In Southasia, this has become particularly apparent in a number of countries where opposition parties have been unable to check or adequately resist growing authoritarian trends in their governments, sometimes instituted in the guise of fighting the pandemic. This week, we are looking at the state of the opposition in Southasia.

In India, despite few victories in state elections last year, opposition parties have been unable to mount a serious challenge to the ruling party inside or outside Parliament. Despite a series of anti-democratic moves by the majority-wielding National Democratic Alliance, most recently seen in the CAA, opposition parties have failed to lead protest movements. In fact, polls show a spike in the popularity of the Modi government, despite serious flaws in its response to the pandemic. Meanwhile, opposition parties took till last month to come together and issue an 11 point charter with demands for the central government to improve their response to COVID-19. Although former Congress Leader Rahul Gandhi has been gaining some traction with his interventions on the ongoing impact of COVID-19, observers have pointed out that the opposition parties meeting left out key parties, revealing ongoing fissures.

With its Parliament dissolved in early March by President Gotabaya Rajapaksa, Sri Lanka’s opposition parties have fewer avenues through which to seek accountability. The general elections were recently rescheduled for 5 August, but the opposition appears weaker than before with the splitting of the United National Party (UNP). Judicial challenges to the government have not been successful either: several fundamental-rights applications – including by the UNP-offshoot Samagi Jana Balawegaya (SJB) challenging the elections commission’s earlier election date – were dismissed by the Supreme Court last week.

In Nepal, calls for the resignation of Prime Minister K P Sharma Oli have died down, in light of the nationalist agenda for the new map (which includes disputed territories within its borders) and the intensifying COVID-19 crisis. As the ruling Nepal Communist Party commands a two-thirds majority, opposition parties have limited space to manoeuvre in the house. Outside the house, large-scale protests over the past few years have not been led by the opposition parties but by independent groups of citizens. Most recently independent groups have mobilised against the killing of Dalit youths and against the government’s poor response to the pandemic.

Bangladesh remains virtually without an opposition party, a combination of the Awami League government’s attacks on the Bangladesh Nationalist Party (BNP) combined with its own growing unpopularity. Meanwhile, in Pakistan, the Pakistan Peoples Party (PPP) has been rocked by allegations of rape against its senior leaders, even as it contends with the Imran Khan-led civilian government and increasing military interventions.

In Myanmar, the pro-military opposition Union Solidarity and Development Party’s (USDP) impeachment efforts against the speaker of the lower house of Parliament failed earlier this month. This comes after the ruling National League for Democracy’s hopes of reducing the military’s power in the house were dashed after its bills seeking constitutional amendment did not muster enough votes in March.

Across Myanmar, Sri Lanka and Nepal, returning migrant workers highlight the complexities of repatriation and the precariousness of their living conditions. Bhutan struggles with internet connectivity in the wake of cyclone Amphan, reviving discussion on the need for a third international gateway.

In Pakistan, #JusticeforBramsh trends after a woman was shot dead and her daughter injured by an armed gang in Makran, leading to protests calling for better law enforcement and alleging complicity between higher authorities and armed gangs in Balochistan.