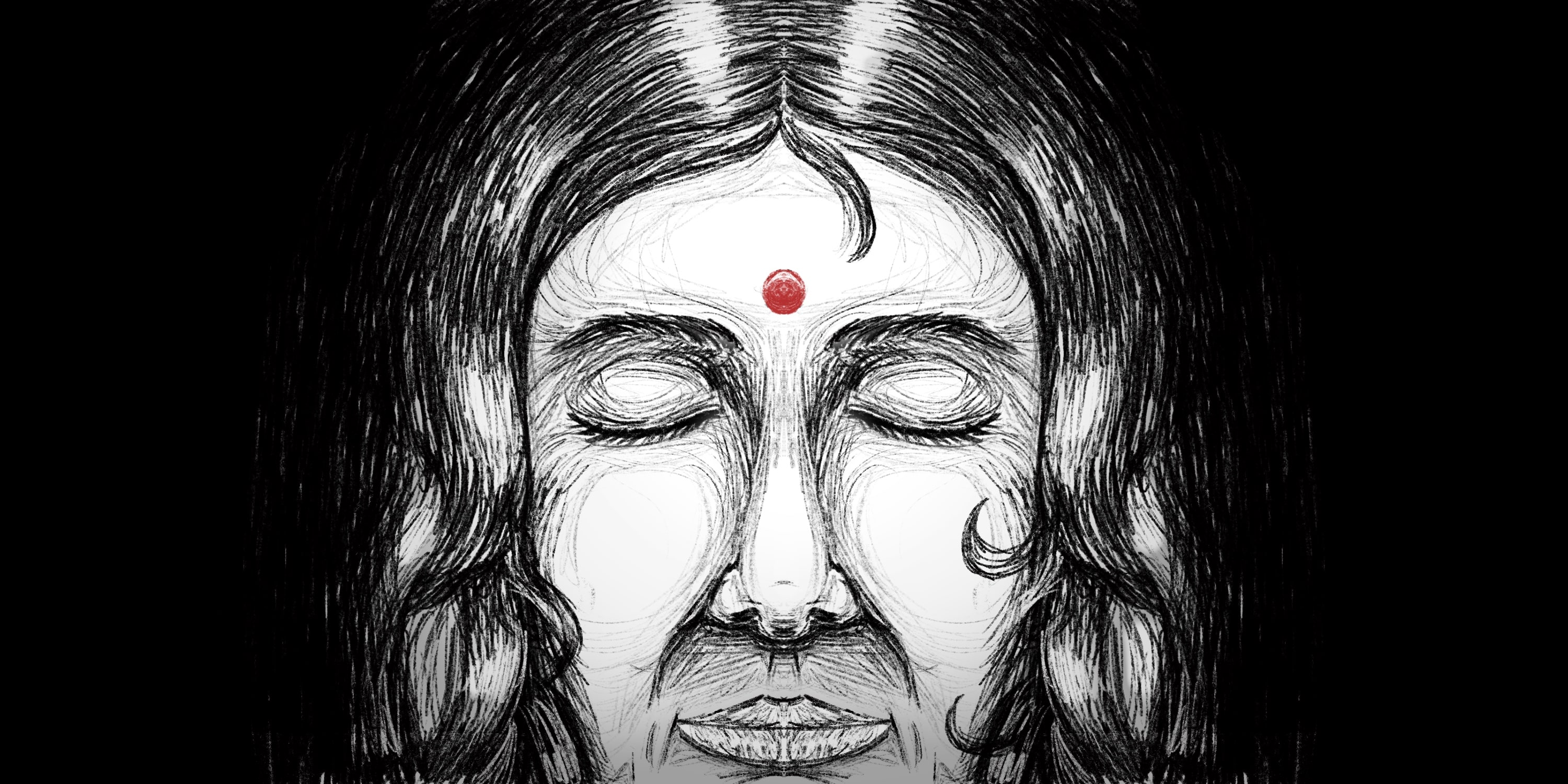 A few years ago, when I was getting dressed to meet my friends for coffee, I decided to put on a black bindi to go with my black Ramones halter-top, white ankle-length pajamas, and black sliders. I had just got my hair trimmed, and the hairdresser had cut my bangs a tad too short so as to reveal a portion of my forehead. And I did not like my forehead bare.

As I was about to step out the door, my mother frowned and asked me to remove the bindi. I took it off, and as soon as I was out of the house, I put it back on – to me it was a delineation of post-liberalisation Indo-Western fashion and therefore ‘cool’, even if she seemed put off by it.

In the 1990s, white celebrities like Gwen Stefani and Madonna were often spotted wearing bindis in music videos and live concerts. Many in the MTV generation viewed this symbol of Hindu womanhood as a flat representation of “Indian culture”. Ironically, though, the bindi itself is a gendered marker, sometimes with different bindis for married and unmarried women. Soon, Westerners assumed that the bindi was, homogeneously, a part of all Indian or Hindu traditions. But for me, even though I was born in India into a Hindu family, the bindi was unfamiliar, as I had never seen any women in my family wear one.

For her, a midnight’s child, my embracing the bindi would have meant to unequivocally denounce my Sindhiness and would perhaps, in some way, have been a sad coda to a rich cultural inheritance.

The reason my mother frowned at my bindi was because Sindhi Hindu women – married or unmarried – did not traditionally wear bindis. She viewed the bindi on my forehead as a performative act of conformity, and therefore insisted I remove it. She has never worn one and neither had her mother. On the other hand, because the bindi is not part of our community’s tradition, I had exoticised it, much like the white girls who saw it as a symbol of fashionable pop culture.

In Indian politics, late Bharatiya Janata Party (BJP) leader in the Lok Sabha Sushma Swaraj was almost always seen wearing a large maroon dot in the centre of her forehead, “an assertion of the joint discourses of Hinduism and tradition”, writes academic Mary Grace Antony in her paper ‘On the Spot: Seeking Acceptance and Expressing Resistance through the Bindi’. “For female BJP politicians,” she writes, “the bindi is an integral component of their overall physical appearance, communicating adherence to party ideals and discursive associations of the “good” Hindu woman.” Interim president of the Indian National Congress Sonia Gandhi, on the other hand, dons the bindi to distance herself from her status as a ‘foreigner’ in order to be accepted by the Indian masses.

The reason my mother frowned at my bindi was because Sindhi Hindu women – married or unmarried – did not traditionally wear bindis. She viewed the bindi on my forehead as a performative act of conformity, and therefore insisted I remove it.

After Partition, the states of Punjab and Bengal were each divided into two – one half went to Pakistan, the other to India. However, the state of Sindh with its substantial Hindu population was, in its entirety, handed over to Pakistan. During Partition, when Muslims and Hindus from Punjab and Bengal migrated to the other side on the basis of their religion, many still remained in their own state, albeit suddenly in a different nation. But Hindus from Sindh had no state of their own to migrate to and so they scattered all over central and western India, and in the process, their culture, language, and traditions were gradually eroded.

The bindi was never a cultural or religious part of Sindhi identity. Sindhi women in pre-Partition India did not wear them. The traditional Sindhi outfit for women was the suthan-cholo, or loose pants with a short tunic, paros, similar to ghagras, and rawos, similar to dupattas but much bigger. The suthan-cholo, in particular, reminded many Hindus in India of Islamic attire.

In Gujarat, where many Sindhis settled after Partition, the bindi was the marked differentiator between Hindu and Muslim women, writes author Nandita Bhavnani in her book ‘The Making of Exile: Sindhi Hindus and the Partition of India. She further notes that Sindhi Hindu women started wearing the bindi, “so that they would not be mistaken for Muslims”, citing Suchitra Balasubrahmanyan’s ‘Partition and Gujarat’.

Besides, Sindhi Hindus in Sindh practiced a less Sanskritised form of Hinduism, because religiosity in Sindh was heavily influenced by syncretic traditions of Islam, Sikhism, and Sufism: Islam because Sindh had been reigned by various Muslim rulers for eleven continuous centuries; Sikhism because neighbouring Punjab worshipped Guru Nanak and his teachings had crossed over to Sindh; and Sufism because Sindh is the land of Sufis revered by both Muslims and Hindus alike. In fact, Bhavnani notes that in pre-Partition Sindh, Hinduism itself “was strongly influenced by Sufism and the teachings of Guru Nanak.” Therefore, the bindi, a mark of Hindu womanhood, never found its way to Sindhi women in pre-Partition Sindh. After Partition, when Sindhis tried to resettle in different states of India, they were shunned at times and labelled as ‘cowards’ and even invaders. Sindh had not undergone as much physical violence during Partition as Punjab had, and therefore their move was seen as unnecessary even though their migration was forced. In fact, Sindhi refugees were even encouraged to move back to the territories now under Pakistan.

The bindi was never a cultural or religious part of Sindhi identity. Sindhi women in pre-Partition India did not wear them.

Once they began to settle in different parts in India and restarted their lives, many were severely marginalised. The contemporary Sindhi language, for instance, mostly uses a script written from right to left in Perso-Arabic, derived from the Nastaliq script, which is visually very similar to Urdu. Sindhis have also typically been meat-eaters. All this, in addition to the absence of bindis and saris in the larger Sindhi culture, gave Sindhis a ‘quasi-Muslim’ image. “Non-vegetarianism in particular was much despised and perceived as ‘dirty’. Sindhi Hindus who settled in Gujarat after Partition recall that they were not able to rent apartments or, as children, other children would not play with them for this reason,” writes Bhavnani in her essay ‘Unwanted Refugees: Sindhi Hindus in India and Muhajirs in Sind.’

In ‘Challenging Definitions: Human Agency, Diverse Religious Practices and the Problems of Boundaries’, professor of religious studies Steven W Ramey considers such treatment of Sindhis a “painful irony”, especially because other Hindus in India questioned the authenticity of the Sindhi Hindu identity, even though that identity was the basis for their migration. Sindhi Hindus also faced resentment, hostility, and jealousy from local communities who believed they were losing their business and trade to the immigrant community as they tried to rehabilitate themselves in a new, unfamiliar country.“At the individual level,” academic Subhadra Anand writes in a case study of Sindhis in post-Partition India,“stress was caused by the anxiety of earning a livelihood” and “at the community level, it was caused by the fear of losing cultural continuity”.

On the other hand, because the bindi is not part of our community’s tradition, I had exoticised it, much like the white girls who saw it as a symbol of fashionable pop culture.

All these factors led Sindhis in post-Partition India “to dilute or cloak their Sindhi identity (with its Muslim and rustic features and overtones) by trying to assimilate into local societies and by learning the regional language and customs”, writes Bhavnani in her book. Some even turned to more conservative forms of Hinduism in order to prove their Hinduness. She further notes in her paper that Sindhi Hindus turned “towards the Hindu Right in terms of embracing a more Sanskritised form of Hinduism as well as a strong belief in India as a ‘Hindu state’.”

Sindhi Hindu women, who started wearing bindis in independent India, much like Sonia Gandhi, appropriated traditions that were not their own, even though they very much identified as Hindu, in an effort to ‘fit in’ with coreligionists, and therefore, in the process, shed their own traditions. Many became vegetarians to prove their authenticity as a Hindu. Other members of the community started celebrating festivals they had no familiarity with – Durga Puja in Bengal, Navratri in Gujarat, and Ganesh Chaturthi in Maharashtra.

Sindhi Hindus also faced resentment, hostility, and jealousy from local communities who believed they were losing their business and trade to the immigrant community as they tried to rehabilitate themselves in a new, unfamiliar country.

Some, like my mother, never took to the sari or the bindi. She always preferred the salwar kameez, and in the last two decades has taken to loose pants and comfortable shirts. So, when she saw me wearing a bindi, she understandably could not find it in herself to acquiesce to my desire to wear one. For her, a midnight’s child, my embracing the bindi would have meant to unequivocally denounce my Sindhiness and would perhaps, in some way, have been a sad coda to a rich cultural inheritance.

Still, every now and then, I do wear a bindi, but I have not quite embraced it. Perhaps I never will.

Chandni Doulatramani is an independent journalist based in India. She writes on and at the intersections of culture, gender, politics, and technology.