What the recent clampdown on educational institutions in India tells us about the ruling dispensation. 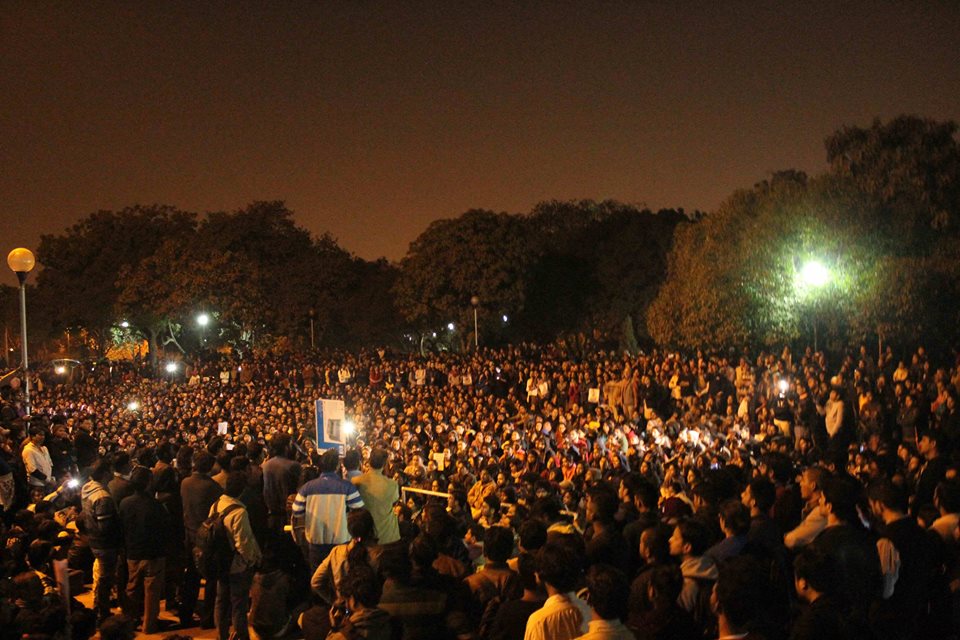 The Bharatiya Janata Party (BJP)-led government’s chief tactics have long been clear to those who have cared to pay attention: shock and awe violence, pitched noise about majoritarian culture disguised as nationalism, sustained attacks on reason and rationality, and now, by extension, the thought policing of the country’s youth. The goal appears to be to create a demos so disorientated, it loses its moral nerve; a republic so confused,  it is found muttering upar di gurgur di intolerance of  tolerance di daal of di why don’t you go to Pakistan if Hindustan is so bad of di dar fatay mun! in the manner of Manto’s Toba Tek Singh. Writers, filmmakers and artists who returned their national awards in 2015 was one kind of response to this climate of violence. It represented a politics by other means, which for a while at least seemed to have bamboozled the Sanghis, more used to mud-slinging and the standard whatabouttery of party-politics. Unable to figure out how to deal with this, the ruling establishment could only howl for them to be packed off to Pakistan. The repeated intrusion into the affairs of educational institutions in the two years of the BJP being in power has to be a sign of paranoia about these so-called enemies of the state, and it is backfiring spectacularly. For now, emerging from the chaos and climate of violence is the principled opposition we were long looking for, led by the students and teachers from some of India’s universities.

On 12 February 2016, the Students’ Union President Kanhaiya Kumar was picked up by plainclothes policemen in Jawaharlal Nehru University (JNU), one of India’s leading universities, without a warrant, on charges of sedition. This was in response to a protest event that took place in JNU on 9 February, marking the third anniversary of the execution of Afzal Guru, convicted for the 2001 attack on the Indian Parliament. At the protest, a few unidentified students had raised “anti-national” slogans. The Akhil Bharatiya Vidyarthi Parishad (ABVP) – the student wing of the Hindu nationalist organisation Rashtriya Swayamsevak Sangh, which has ideological and organisational links with the ruling BJP – had demanded action against the organisers of the event. This follows closely on the heels of student protests and outrage throughout the country related to Dalit research scholar Rohith Vemula’s suicide on 17 January 2016  – which were also met with disproportionate police force in New Delhi, resulting in protesters being water cannoned, manhandled, and the cameras of  photojournalists’ being broken or confiscated. The recent developments in JNU are another instance of the present government’s clampdown on educational institutions and attempted intimidation of its students and teachers.

Before we can even begin an open and legitimate discussion about rights to self-determination, capital punishment, or parliamentary democracy, we must first pass the nationalism test – a test so rigged, most of us are sure to fail it. Patriotism may be the last refuge of scoundrels, but at present they seem to be the ones setting the terms of the debate.

Hours before the arrest and raids on hostels in search of protesting students, Home Minister Rajnath Singh had declared, “If anyone raises anti-India slogans, tries to raise question on country’s unity and integrity, they will not be spared.” Smriti Irani, Minister of Human Resource Development (HRD), said on the same day, “I only want to say that today is the day of worship of Goddess Saraswati. Saraswati blesses every family that whatever they speak is for progress and strengthening the nation… The nation will never tolerate an insult to mother India.” The menace and piety notwithstanding, these statements are just ways to create a rhetorical din so that basic conceptual distinctions are muddied, all critical engagements deflected and the conception of the very right to dissent and freedom of expression weakened. In this framework, any criticism of the government becomes sedition, jingoism is seen as the pure expression of nationalism, and activism begins to look like criminal conspiracy. Before we can even begin an open and legitimate discussion about rights to self-determination, capital punishment, or parliamentary democracy, we must first pass the nationalism test – a test so rigged, most of us are sure to fail it. Patriotism may be the last refuge of scoundrels, but at present they seem to be the ones setting the terms of the debate.

A press statement by former JNU students who had been arrested during Indira Gandhi’s emergency reads: “This is reminiscent of the dark days of the emergency when the state had swooped down on the campus and had arrested many on false and trumped up charges. While we hold no brief for those who raised objectionable slogans, the arrested students have been charged with anti-national activities, precisely the charges on which we were also arrested during the draconian emergency.” The big difference in the current context, and this is quite an achievement, is that Narendra Modi does not even need to declare an emergency to veer India’s democracy into what is beginning to look like a police state. There is no proof that Kanhaiya Kumar raised these slogans, but even if he had, it would still not justify police action. Legal precedents on sedition charges in India have ensured that only when it leads to “incitement of violence”, can there be grounds for prosecution. This means, no matter how distasteful the speech or sloganeering, even if it expresses disaffection towards the state, it is not punishable under law. If we were to analyse Kanhaiya Kumar’s speech before his arrest, by these parameters, there was very little ground for an arrest. Polemical in the style of protest speeches, Kumar’s words presented a sharp exposition on the constitutional rights of Dalits, women, Muslims and other minorities, an inclusive vision of democratic parliamentary politics, and an open call to Sanghis for a debate on the very concept of violence. Not exactly the ramblings of a crazed anti-national. He advanced an important question the government would do well to consider itself: what is the university for? His answer: “to critically analyse the ‘common conscience’ of society.”

The BJP, of course, appears to care very little for the university, except to fulfil its own ideological ends. The attack on the university space has been constant – from BJP’s efforts to install puppet administrators in premier institutions such as the Film and Television Institute of India in Pune to the attempt to withdraw crucial doctoral research fellowships such as the non-NET scholarship. The country’s neoliberal economic policies, and in this we don’t see big departures from the policies of the previous government, has resulted in the increasing privatisation of education. This has warranted massive budget cuts in education in the ongoing fiscal year. Add to this, the BJP’s penchant to unleash lathi charges and water cannons against students demanding their rights.

In August 2015, once again acting at the behest of ABVP cadre, Union Minister for Labour Bandaru Dattatereya wrote a letter to Smriti Irani asking the HRD ministry to intervene in the University of Hyderabad, complaining that it had become a “den of casteist, extremist and anti-national politics”. This is almost exactly the same charge that JNU currently faces. In Hyderabad Central University, students from the Ambedkar Students Association (ASA), to which Rohith Vemula belonged, had carried out protests against the execution of Yakub Memon (convicted in the 1993 Bombay bombings) and the ABVP attacks on the screening of Muzaffarnagar Baaqi Hai, a documentary film that looks at the 2013 Uttar Pradesh riots, drawing attention to BJP’s involvement in it. The HRD ministry, acting with surprising alacrity, wrote a series of letters within a span of a few months, asking for the “facts” of the case. What followed was a tense and prolonged series of events leading up to the suicide of Rohith Vemula. While spirited debates based on reason and scientific temperament is not exactly associated with the ABVP, the fact that its chief mode of engagement is fear and intimidation, in the style of its protectors at the Centre, does not bode well for the university, or for democracy. The fact that thugs and goons are emboldened and guaranteed protection in campuses by the ruling dispensation can only further corrode an environment that is supposed to safeguard independent thought, critical debate and self-reflection. The termites have spread, to paraphrase Christopher Hitchens, and long have they dined.

This sequence of attacks doesn’t appear to have slowed down. On 14 February, Rajnath Singh declared, based on what turned out to be a fake twitter handle, that Hafiz Saeed, the founder of Lashkar-e-Taiba, had lent “support” to the JNU event. The Delhi Police, a few days earlier, had issued an alert warning “student community in JNU and across the country [to] not get carried away by seditious, anti-national rhetoric.” Meanwhile three artists belonging to a cultural group called Sangwari were detained by the police, without warrant or explanation, for “looking like a JNU student”. At the Delhi court the next day, students, teachers and journalists were threatened, molested and beaten up by men in court dress shouting anti-JNU slogans in the presence of the police, just before Kanhaiya Kumar was to be produced before a magistrate. A NDTV journalist, Sonal Mehrotra, was told that she would “be harmed” if she didn’t leave the court premises. The BJP minister OP Sharma said to CNN-IBN “there is nothing wrong in killing those raising pro-Pakistan slogans”, after being caught on camera beating an identified person right outside the court. To create this toxic climate of threat and violence, to make dissent seem seditious and ‘anti-national’ is a concerted effort at bullying the republic, to neutralise universities and to keep shifting goalposts so that criticism of the current government is indistinguishable from white noise.

Kanhaiya asks a very central question in his speech, “Who is Ajmal Kasab… Who is Afzal Guru… who are these people… What is their situation that they are ready to commit assassination by strapping themselves to bombs? If we cannot raise this question in a university, I don’t think the university has a right to exist”. And in this anti-intellectual atmosphere of jingoistic chest-thumping and fear-mongering, the media too must not be blindsided and must be able to ask clear and difficult questions, whether they relate to executions that are supposedly meant to satisfy the bloodlust and ‘collective conscience’ of the nation, or to the question of self-determination of a people. Something that primetime news TV anchor Arnab Goswami failed to do when he characteristically lost the plot and lowered the bar by declaring JNU to be a “den of anti-nationals” from his fiery pulpit, using 50 minutes to froth at the mouth at the “brigade that calls India intolerant”.

The sedition charges will not hold; they seldom do. What it has done, however, is to give us a clear picture of what and who are identified as threats by the ruling establishment. We know now the growing list of figures that frighten the fascists: the political student intellectual, the writer who gives up his state award, the journalist who speaks truth to power.

~ Puja Sen is an Assistant Editor at Himal Southasian.