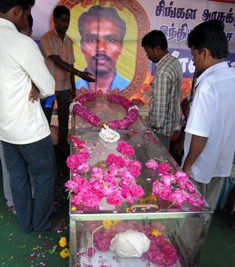 “The police will try to lay my body to rest. Don’t allow them to do that! Capture my dead body, don’t bury it, and use it as a trump card to sharpen your struggle!” said K Muthukumar in a four-page written statement in Tamil that he left at the site of his public self-immolation in Madras on 29 January. Muthukumar, a young journalist, was protesting the inaction of the Tamil Nadu government in the ongoing humanitarian tragedy in Sri Lanka, as the Colombo military continued to pound the area controlled by the Tigers. All the while, over 100,000 civilians are thought to have been herded together by the LTTE into a tiny, 20-sq-km ‘No-fire zone’ in the Vanni (see accompanying story, “And the war continues”). In the end, Muthukumar’s exhortations went unheeded. The students and youths to whom his final remarks were primarily addressed were eventually persuaded otherwise by local political leaders. Just two days after Muthukumar’s death, the last rites were performed on his body, and he was given a martyr’s funeral.

Timing has been a significant factor in the lead-up to the Lok Sabha elections, slated for 13 May in Tamil Nadu. Just as the violence in Sri Lanka had the potential to affect the state polls, Muthukumar’s self-immolation and the subsequent public anger had carried the possibility of bringing the humanitarian tragedy in the LTTE-controlled areas of Sri Lanka to the forefront of the national electoral battle. The ground reality, however, turned out to be rather different. “Muthukumar’s death started a fire, but this has been doused by the politicians,” says Bala, a longtime political observer and cartoonist with Kumudam, a popular Tamil magazine. “So while the issue is uppermost in the minds of a number of educated urban youth, it has been more or less pushed out of sight in the general discourse.”
Many agree with Bala’s frustration. “Students did respond, and started a statewide protest immediately after the immolation,” says activist Sherin Asha. “But some of the politicians were successful in manipulating the youth to give up Muthukumar’s body, and the main rallying point of the protests was lost.” The current sentiment in the state seems to be: When Sri Lankan Tamils bleed, it hurts in Tamil Nadu. It is for this reason that the social protest that began with Muthukumar has since claimed the lives of ten others. In mid-April, a group of women began a fast-unto-death at the site of Muthukumar’s funeral, calling on Sonia Gandhi to “stop the war … against Eelam Tamils”.

The Indian government, while officially maintaining that there is a need to protect the civilian Tamil population in Sri Lanka, is widely perceived in Tamil Nadu to be supporting the Sri Lankan government’s offensive with logistical support. (Other regional powers, meanwhile, are supplying arms to the Sri Lankan Army, notably Pakistan and China.) An undercurrent of anger is evident in the state against what is – correctly or otherwise – perceived as vengeance being wreaked against the Sri Lankan Tamils by Sonia Gandhi, wife of the slain Rajiv Gandhi. The Madras government is currently headed by M Karunanidhi, who held the same position when Rajiv was killed in May 1991 by an LTTE assassin at a public meeting in Sriperumbudur, close to Madras. The Indian premier was targeted for his decision to send in a Peace-keeping Force (the IPKF) to assist the Sri Lankan Army in fighting the rebels. The IPKF is widely believed to have been involved in a number of atrocities, thus igniting anger that eventually culminated in the suicide bomb that took Rajiv Gandhi’s life.

Today, Karunanidhi’s Dravida Munnetra Kazhagam (DMK) is an important ally in the United Progressive Alliance (UPA) coalition government in New Delhi. Tamil Nadu, which has just 40 out of the 552 seats in Parliament, had no less than 10 ministers at the Centre, mostly belonging to the DMK and its erstwhile ally, the Pattali Makkal Katchi (PMK). This latter, however, has now switched sides to the state opposition, joining the mini-front headed by former Chief Minister J Jayalalitha’s All India Anna Dravida Munnetra Kazhagam (AIADMK). The octogenarian Karunanidhi, meanwhile, suffered the loss of his government in the wake of Rajiv Gandhi’s death, and has learned from past experience. As such, the DMK, long known as an outright votary of the Tamil cause, has this time around decided to make little more than muted protests and symbolic gestures in support of the Sri Lankan Tamils.

Others are still attempting to gain political mileage from what is taking place across the Palk Straits, but with only middling success. For instance, one of the more recent public statements by Y Gopalaswamy (‘Vaiko’), who heads the Marumalarchi Dravida Munnetra Kazhagam (MDMK), was the warning that, “Rivers of blood will flow in Tamil Nadu if so much as a hair of [LTTE chief] Prabhakaran’s is harmed.” Yet the effect of such statements does not appear to be as explosive as it has been in the past. Today, tired cynicism tends to greet such remarks by politicians, with the public often seeing these rhetorical flourishes as sabre-rattling rather than as genuine threats.

Whitewash
Still, to what extent does the issue of Sri Lankan Tamils feature in the public mind in the current election frenzy? Viduthalai Rajendran, of the Periyar Dravida Kazhagam, strongly indicts both New Delhi and Beijing for the current situation in Sri Lanka. “India is supporting the Sri Lankan government, sending trained staff and equipment. China is selling them arms to use against the Tamils,” he says. “There is a lack of strategic and statesmanlike leadership among Asian countries. Unless Asian powers take up the issue in their areas, it is futile to expect other countries – such as America or Norway – to do something on the matter.” Asked how this would affect the outcome of the parliamentary elections in the state, Rajendran said that the media had raised awareness among educated sections of the youth, who are now aware of the realities and “no other issue is more important to them.”

Still, other observers disagree with this contention. “There may be some impact in a couple of areas, such as Chennai and Madurai, due to the urban youth,” says Sherin Asha, the activist. “But in the rural areas, the people are more concerned about daily issues: water, government schemes, food prices, etc. They may not really be fully aware of the implications of the Sri Lankan Tamil issue.” Bala, the political cartoonist, adds that even though the issue may figure in the speeches of political leaders and in the newspapers, this amounts to little more than lip service. “Politicians, like Jayalalitha, who are known to be openly against the LTTE, undertake fasts in support of Sri Lankan Tamils,” he says. “Vaiko, who has always been vocal in his support for the cause, joins her for electoral gains. And Thirumavalavan, of the Dalit Panthers, who built his political career championing the cause, continues to be part of the DMK government, which is supporting the government at the Centre despite its pro-Sri Lankan stance.”

A slightly more nuanced analysis is offered by Armstrong, who heads the fledgling Tamil Nadu unit of Uttar Pradesh Chief Minister Mayawati’s Bahujan Samaj Party (BSP). “Young people and grassroots activists of all parties are aware of the culpability of the leadership,” he says of the events, discussing the events surrounding the death of Muthukumar. “But they are unable to do much in the circumstances, as everyone is concerned about their vulnerability to charges of supporting ‘terrorism’.”

Little assistance in this situation has come from the traditional watchdog, the media. Bala says that the print media has also been intimidated into whitewashing the issue of Sri Lankan Tamils by government threats of withholding official advertising. The situation is little better for the electronic media. “Even here, the main TV news channels are owned by political parties,” Bala says, “and thus they will only reflect the party’s position. The other channels are owned by North Indians, who may not be aware of the Tamil history and identity. The correspondents of other newspapers tend to be from outside Tamil Nadu, and thus have the same handicap.” At the moment, civil-society groups are the only sections in Tamil Nadu that are maintaining the issue in the public’s eye.

Beyond the mid-May elections, how can such a situation change? “This will happen when the young people who have witnessed these events grow up and mature into leaders themselves,” suggests Asha. “A new generation of leaders has to come up to take up these causes and not betray the hopes of the innocent, the children, the women and those who have been silenced.” That will require several more years, however. At this critical moment of political movement, the depressing fact is that even the political processes and leaders of a state as progressive and politically aware as Tamil Nadu are not enough to reflect the life-and-death concerns of the children, women and other non-combatants who are caught in a protracted civil war, grimly playing out in the immediate neighbourhood.