Skip to content
Commentary > Can the Southasian toad leapfrog?

Can the Southasian toad leapfrog?

We gave them Rajneesh, and they gave us Bill Gates 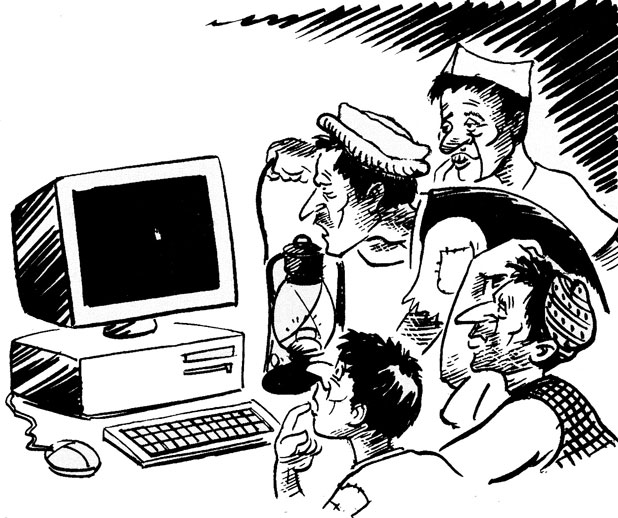 In one of the more ill-timed trips he has ever made, Fidel Ramos, the Philippines’ cigar-chomping president, decided to pay an official visit to India in March 1997. Nothing wrong with that of course; a portrait in front of the Taj Mahal is a must in the photo album of every head of state. But no one had warned Ramos that Bill Gates was going to be in New Delhi on the same dates.

The result was that while Gates got banner newspaper headlines and top slots on every television news programme, Ramos barely managed a brief mention on page 12 of the national papers. Understandable, since Gates’ private worth is more than the GNP of some medium-sized countries and he rakes in more cash every day than the Philippines makes daily from all its exports.

So, why be surprised that Gates was able to meet H D Deve Gowda, then warming the Prime Ministerial chair, twice? And in every interview while in India, Gates chanted the mantra of technology and how it would miraculously lift India out of poverty. The television stations controlled by global media moghuls and multinational entertainment empires swallowed whole Bill’s panacea. They broadcast the guru’s message to India from satellites hovering 24,000 miles above the Indian Ocean. India’s domestic media basked in the warm glow of rare appreciation from the world’s foremost money-making brain, who is trying to do to Netscape with Internet Explorer what George Bush did to Iraq with Cruise missiles.

In all the tamasha of the Gates visit, even the cybersceptics got a little carried away by the hype. ‘Leapfrogging’ became the favourite verb during the Gates visit, and we all desperately wanted to believe that information technology in all its avatars would vault us into NIC-hood. Or, as one Indian politician once put it, “go from making potato chips to making microchips”.

Technology always prioritises the interests of the civilisation that spawned it

Being more a businessman than a visionary, Gates’ eyes were more on India’s cheap, English-speaking youngsters to hire for his silicon sweatshops in Bangalore. Here they are, lined up like women in a Nike factory in Vietnam, solving problems for their sleeping clients in Austin. Oh yes, and the Millennium Bug. That will keep India’s techies in business well into the 2000s.

So, can information technology succeed where all earlier development cure-alls failed? We are told that the internet will level the playing field, democratise information and ensure that an informed public will take part in decision-making and hasten development. However, if history has taught us anything it is this: Technology by itself is never the answer. It is not neutral, and technology always prioritises the interests of the civilisation that spawned it.

The fact that computer ads have started resembling automobile commercials provides proof that information technology is an offshoot of the same culture of consumerism and waste. There is that same obsession with design, speed, acceleration and the call for a spirit of adventure. The planned obsolescence of cars has its parallel in the never-ending cycle of annual software and hardware upgrades. The latest issue of the PC monthly, Personal Computer World, has more than 600 pages – more than three-fourths of them are ads.

All added up, the corporate values that drive information technology are the same ones that messed up the earth with the unbounded plunder of natural resources. Assembling an average CPU and monitor weighing 25 kilograms leaves behind 70 kilograms of waste, uses up 7800 litres of water and 2300 kilowatt hours of energy. Using a Pentium-pro for email is like driving to work alone in a Mitsubishi Pajero.

At the ballroom of New Delhi’s Oberoi Hotel on a recent rainy November day, the launch of an e-commerce company is in full swing. A screen on the wall displays the projected image of a monitor hooked up to a site selling merchandise through the web.

Virtual multinationals have discovered India’s middle class! They have their eyes on the prize: The number of internet users in India is to rise from 10,000 in 1995 to (some hope) 8 million by 2002. That is twice the population of Finland – the land of Nokia and the world’s most wired nation.

At the Oberoi, the slick brochures are breathless with optimism: “Hoping to attract buyers and dealers from Canada and Brazil to Kenya and Malaysia? Looking for business news from the US, Sweden and Australia? Or trying to cut phone and courier costs between your offices in Baroda and Bangkok? Get online. No other medium can match the efficiency, and speed.” Or the greed.

Is this what the information revolution will finally come down to – a lazy way to do home shopping? Or, a cheap and instantaneous postal system for my niece to request music videos from Asia’s favourite video jockey in Hong Kong? Billions of gigabytes of information whiz around the world in nanoseconds. This information can be linked, making it possible to regard individual computer hosts as neurons and the wired planet as one gigantic brain. Biologically, however, human beings have not evolved as fast. Information travels these superhighways with a speed, volume and intricacy that have exceeded the human capacity to grasp it all.

We can send vast amounts of data in the twinkling of an eye to the other end of the earth. But what is it that we are really communicating? Does it have any use? Does it add up to knowledge? Is it making the world a better place? Obsessed with the quantity and speed of its transmission, we seem to have lost track of the quality of that information.

All this technology has its uses. After I finish writing this piece, I will press the send button and shoot this file via my local ISP to Himal, which is a 30-second bicycle ride away. That is the real miracle: that a newsroom in New York is as close as the office next door. This is the end of geography.

But let’s face it: This technology is for Southasia’s information elite – those well-off enough to have the right political connections to get a phone line, afford the hardware and the service provider’s fees. And whatever the apostles of Bill Gates may say, for the moment the internet is still very much a case of garbage-in-garbage-out. Such a pity you can’t read it in the toilet.

Mix information technology with a worldwide free market and you have today’s great globaliser. A multimedia juggernaut that carries with it the monoculture message that will result in what German ecologist Wolfgang Sachs calls “cultural evaporation”: erosion of diversity and its replacement by a uniform value system. The internet’s linguistic imperialism could speed up this uniformity, while further dividing the world into the Knows and the Know-Nots. And while we may think we live in the ‘Age of Information’, more and more of it is useless in working out answers to global problems, defining lifestyles more suited to a planet with finite resources, or in seeking social justice and equity. The ‘convergence’ of telecommunications, television and computers and their supranational ownership propagates the values of a globalised throwaway society. It is aggravating information overload and burying what is essential ever deeper under an avalanche of shallow words and superficial images.

So, what next? The consensus seems to be that information technology is like a tiger, you can either ride it or be eaten up. So, deep in the rainforests of southern Mexico, the Zapatista guerrilla leader Subcomandante Marcos gives interviews via the internet. The New People’s Army in the Philippines, now with its own website, wages low-intensity conflict against the military in the thickets of cyberspace. What an irony that a communications system designed by the US military to let its links survive a nuclear attack by a communist superpower is the potent weapon for leftist insurgents in the Third World.

Across the world, non-governmental organisations, human rights activists, trampled minorities, suppressed democracy supporters from Indonesia to Burma, indigenous groups like the Ogoni and the Karen have found silicon bonding and solidarity via the internet. Its inherent anarchy, its decentralised nature and freedom from official control has ironically made the internet the most ideal medium to fight the commercialism with which the internet threatens to undo itself.

It is tempting to find either/or answers to the questions of what information technology can do for developing areas of the world like Southasia. Mimicking the computer’s binary code, we tend to argue about information technology in terms of either/or, good/evil, centralising/decentralising, globalising/localising. Probably, the future is going to be a messy analog mishmash. There are parts of the world that will be enslaved by information technology, others will be liberated. Transnationals will cash in on the commercial potentials of the web, but savvy producers from the South will also be able to reach buyers for organically grown tea, market jute bags or sell neem-based pesticides. And those who yearn for freedom in the world’s remaining dictatorships can use it to bypass official controls.

The degree to which Southasia can benefit from the internet’s potential for democracy, bring about true decentralisation, or spread knowledge or education, will depend on how much support the information-poor get to ‘log on’. At present, only donor-funded NGOs and research centres in the Subcontinent can afford to buy computers, get hooked to a phone line and connect to the internet. The joke is that 90 percent of Indians do not have a phone, while the rest do not have a dial tone. Even existing phone lines are not reliable enough for modem use. But Bill Gates is not investing in phones; the rate of return on hiring Indian programmers is much more lucrative.

Kunda Dixit is a Kathmandu-based journalist, and editor of the Nepali Times.