Regulator and regulated breaching the law in Odisha

The aftermath of an industrial accident at a Vedanta coal power plant. 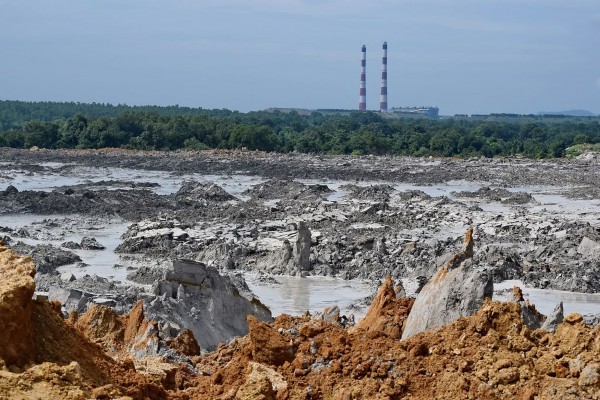 Gray muck oozes down a narrow channel between banks of pink-tinged sand just beyond Katikela village in Jharsuguda district in Odisha. The thick effluent slides toward a small river, on whose banks sit mounds of slate gray ash that inch into the stream, dispersing into the water.  The stream – also gray, a diluted version of the rivulet filled with thick ash that feeds it – skirts Katikela village. From there, it flows into the Bheden River, joining the great Mahanadi River system, Odisha’s lifeline.

On the evening of 28 August 2017, one wall of an 83-acre structure filled with wet fly ash – a byproduct of coal combustion – breached. Almost five million tons of toxic destruction poured out. The fly-ash pond – euphemistically called ‘Lagoon-2’ – is one of three such structures attached to Vedanta Aluminium Captive Power Plant 1 in Jharsuguda, which in turn powers the aluminum factory owned by Vedanta Resources, one of the most powerful and diversified mining companies in the world. Immediately after the breach, local residents and farmers protested, locking one of the gates of the coal power plant.

The fly ash covered over 100 acres of land, 65 acres of which was used for agriculture. Mitravanu Sahu, a spokesperson for the farmers who lost their land to the breach, says the fly-ash slurry engulfed the farmers’ crops in minutes because of the large volume. The height of the walls of the ash pond was 27 meters, approximately that of an eight-story building. Many farmers lost their crops in the breach, which buried fields under several feet of hardened fly-ash slurry, rendering them unfit for agriculture. Those who can no longer support their families through agriculture say they now have to work as day labourers to make ends meet.

Among the issues that have worried the residents of Katikela is what they see to be inaction on the part of local regulatory agencies. Following the incident, in September 2017, the Odisha State Pollution Control Board (OSPCB), the local agency responsible for monitoring pollution asked Vedanta Aluminum to close down five power-producing units in Jharsuguda district, including the three fly-ash ponds in Katikela. But this order was revoked in less than a week. Dillip Kumar Behera, a senior environmental scientist with the OSPCB, says, “We shut down one of the plants temporarily,” and added that his “knowledge is they have taken remedial measures” to deal with the excess of fly ash.

Behera claims that for the most part, large industries in the region are responsible corporate citizens that have adequate systems for controlling pollution, and that his agency has been successful in overseeing them. He adds that despite the farmers’ claims, water contamination was unlikely, because the fly-ash slurry forms an impermeable layer as it dries and this prevents extensive leaching.

However, Ranjan Panda, an environmentalist, who is the Convener of Water Initiatives Odisha and has been researching Odisha’s waterbodies, says, “The slurry is wet when it’s dumped, so leaching [into the soil] is high at that time and continues afterwards because the lagoons are not insulated. The other danger is that during the monsoon rains, toxic elements flow into the nearby area from these open ponds.” Panda says that while breaches are occasional disasters, fly ash in the air is a constant threat, and can harm the health of people exposed to it.

Critics of the OSPCB maintain the board has been far too lax in enforcing regulations, such as those that require fly-ash ponds to be situated at least 500 metres away from any dwellings. In fact, the fly-ash pond that breached in August 2017 was only around 100 metres away from some village homes. A year before the breach, the OSPCB had also given Vedanta permission to begin increasing the height of the same pond from 27 to 40 metres.

Unsatisfied with the OSPCB, Katikela’s farmers have been seeking restitution through a case filed at India’s National Green Tribunal (NGT). Founded by an act of Parliament in 2010 to handle cases that involve environmental protection and conservation of natural resources, the NGT has the power to order corporations and state governments to pay fines for environmental damages. For instance, on 24 January 2019 the NGT fined the Odisha state government USD 3.5 million over damage caused by illegal mining in the Dankari Hills, located in the eastern part of the state.

Filed in May 2018, the first hearing of the Katikela breach case took place only three months later, in August 2018. So far, the NGT has ordered the OSPCB to order Vedanta to clean the 18 km stretch of the Bheden River contaminated by fly ash. As of September 2019, Vedanta had cleared only 2.5 km of the river. Dissatisfied with the OSPCB’s testimony about the continuing pollution, the tribunal has also appointed a one-man commission – instead of the usual three-man commission typical in such cases – to investigate the incident. The final hearing, which is expected to decide on the damages, was initially scheduled for 9 January 2019; it has now been postponed by a month to 4 February.

As Vedanta continues to deposit fly ash in ‘Lagoon-2’, farmers hope that the NGT will consider the regulations set by India’s Ministry of Environment and Forests regarding fly-ash ponds. These require the complete reuse of fly ash within four years for those holding structures built before 2008, and within three years for those built after 2008, such as the Vedanta plant whose first unit was inaugurated in 2010. Despite being a toxic byproduct of coal combustion, fly ash has cementing properties which is useful for making bricks and macadam for the India’s booming construction industry. Proper reuse of fly ash would help preserve sand, which is being overmined for use in concrete, causing tremendous damage to riverbeds not just in India but throughout Southasia.

As of this reporting, some farmers have received cash compensation at the rate of INR 50,000 (USD 700) per acre from Vedanta for the loss of crops, based on the recommendation of Odisha’s Rehabilitation and Peripheral Development Advisory Committee (RPDAC), a body that oversees issues of displacement, resettlement and rehabilitation in the state. Vedanta Aluminum claims that company has compensated 95 percent of the landowners for the loss of their crops. According to Sanjeev Patnaik, a spokesperson for the company, “Out of a total impacted area of 115 acres of land, 70 acres is ours and an additional 13.45 acres has been purchased. We are in discussion with other landowners for purchases.” However some residents think Vedanta aims to buy their damaged land at distress rates – prices lower than market value due to the deteriorated state of the land – to construct additional fly-ash ponds; the company was already trying to acquire more land in the same area prior to the breach.

Patnaik says that the company, “has constructed 14 check dams to obstruct flow of ash,” into the river, and that the ash accumulated at those check dams, “is being removed on a continuous basis.” An affidavit by the OSPCB in September 2018, however, noted that even though no slurry was being directly discharged into the river, the possibility of contamination of the river during the rains “could not be ruled out.”

For several farmers who lost their land and their livelihood, cash compensation will only partly address their problems. They want the entire village to be relocated en masse, not only to maintain long-standing community ties but also because they fear another breach, given the continued operation of the fly-ash ponds. Since the local school is adjacent to a smokestack, and many acres of land are still covered in fly ash, that would seem like a reasonable albeit an expensive solution

Cheryl Colopy is a Fulbright scholar and former public radio reporter. She is the author of Dirty, Sacred Rivers, an exploration of the looming catastrophes in the Ganges river basin.

What’s left of it

Praful Bidwai’s book discusses the past and potential of Left politics in India.

Towards a Burmese spring

The flood that was, the flood to come

Not their own wars