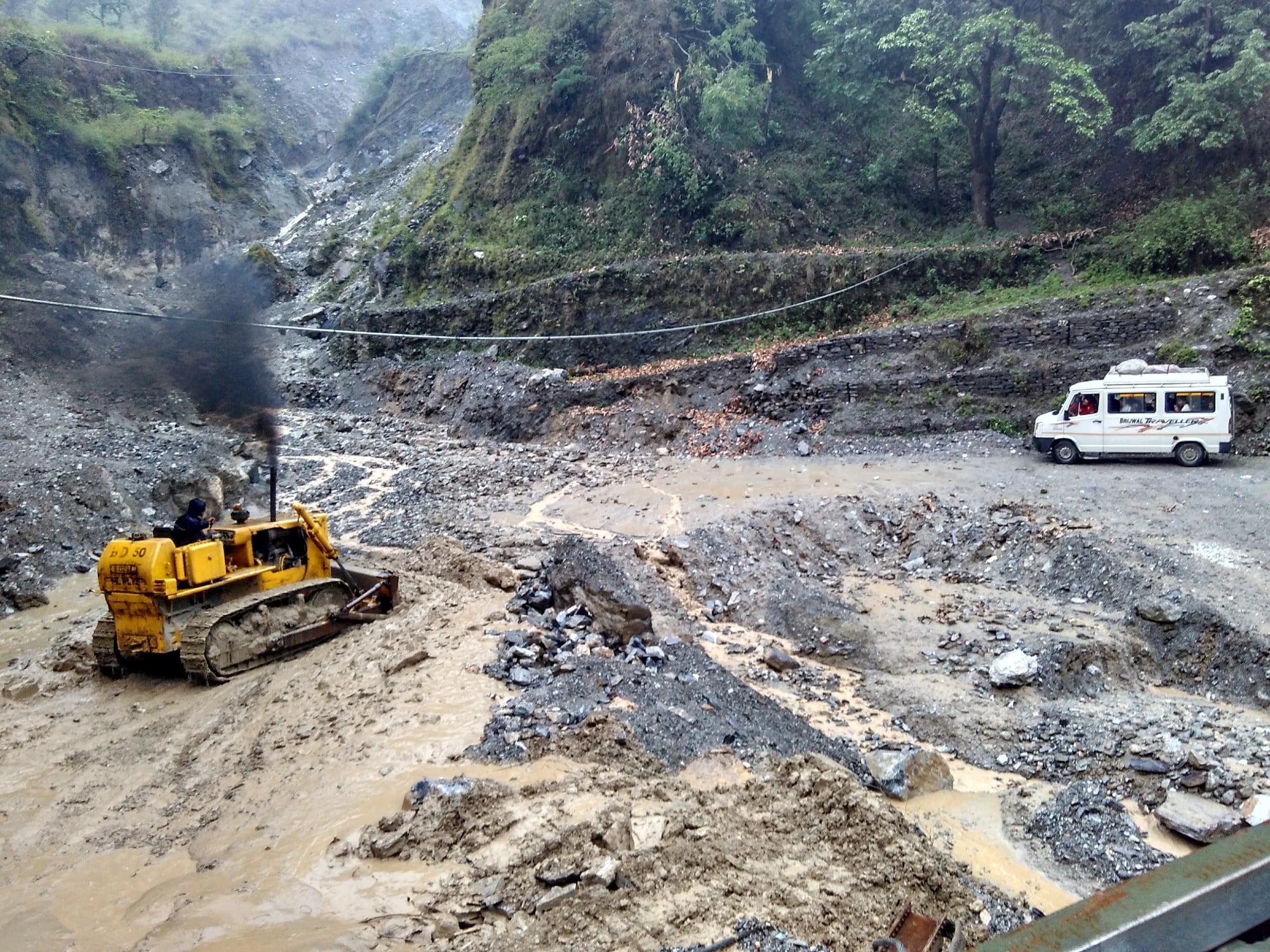 The Himalaya is geologically alive. Following decades of research, geologists are now credibly able to explain how the 2400-kilometre long Himalayan mountain chain, with its soaring peaks, deep gorges and alpine glaciers, is a product of an ongoing orogeny – the continual thrust of the Indian Plate into the Eurasian Plate. While histories of human settlement and livelihoods in such dynamic mountainous environments have always been precarious, the impacts of climate change have sparked fresh fears, particularly with the realisation that erratic rainfall and temperature fluctuations can aggravate geomorphological processes such as floods, soil erosion and landslides. Not unsurprisingly, this discernible spike in environmental volatility has led many to speculate that a reckoning may be in the offing over the fraught relationship between environmentalism and developmental politics in the region. A case in point is Uttarakhand, the mountainous Himalayan state located in North India, which witnessed three disaster episodes in the last decade alone.

The harsh lockdown revealed that Uttarakhand, despite years of manufacturing and service sector growth, continues to be a net exporter of human resources.

In mid-June 2013, the district of Rudraprayag was pummelled by a sudden cloudburst, which set off a chain of landslides that impacted surrounding districts, including Pithoragarh, Uttarkashi and Dehradun, among others. The cloudburst drowned the pilgrimage site of Kedarnath and turned the Mandakini and Alaknanda rivers into raging torrents. The official death toll of close to 6000 people largely comprised tourists and pilgrims. On 7 February 2021, a ‘hanging glacier’ broke off from the steep slopes of the Nanda Ghunti mountain in the Chamoli district and emptied into a tributary of the Rishi Ganga. The ensuing flood swept aside roads and smashed through a bridge as well as two hydroelectric power plants. Several construction workers were tragically added to the 72 confirmed deaths from the incident after watery sludge raced into the worksite tunnels at one of the hydroelectric projects, which was under construction. A few months later, on 23 April, another falling glacier set off an avalanche that killed eight people and critically injured six more in the Chamoli Garhwal district, while 384 people working on a road construction project at a Border Roads Organisation (BRO) camp had to be rescued.

The call for community development

With a population of approximately ten million, Uttarakhand was granted full statehood as recently as 2000, based on the claim that the unique mountain ecology required an altogether different development imagination. It was repeatedly highlighted during the statehood struggle that local communities had been impoverished because of the systematic extraction and diversion of their natural resources. This drain of the hill’s resources could be traced as far back as the nineteenth century when colonial authorities logged large tracts of forests for timber, some of which was used for constructing the railway network in British India.

Ramachandra Guha’s celebrated 1989 monograph The Unquiet Woods points to how village communities in the Garhwal and Kumaon hills under British colonial rule were caught up in bruising battles to defend their customary access to forest resources, even as they also sought to preserve the historically mixed forests from being transformed into ecologically impoverished monocultures of chir pine (or Pinus roxburghii). These varied histories of resistance to environmental degradation in Uttarakhand subsequently inspired modern environmentalism in independent India. The most famous example is the incident that ignited the Chipko movement of the 1970s when women of Reni Village in Garhwal saved their forests by bravely hugging the trees that loggers were aiming to cut down. Their peaceful but powerful action not only went on to electrify a range of global environmental movements but also spawned debates within eco-feminism, eco-socialism and Gandhian environmentalism, to name a few.

In the 1990s, Sunderlal Bahuguna, the indefatigable Gandhian social activist, mobilised a spirited campaign against the construction of the Tehri dam, in addition to launching re-afforestation efforts in the hills. Equally impactful locally and internationally was the grassroots activism of Chandi Prasad Bhatt, the Gandhian environmentalist who innovatively advocated for building sustainable rural livelihoods. However, central to all these environmental imaginations was a vigorous critique of the centralised developmental state that callously pursued the exploitation of nature. Environmentalism 1.0, in effect, was about replacing the heavy hand of the developmental state with empowered local communities and decentralised resource management.

Ironically, upon being granted full statehood, successive elected governments in Uttarakhand have embraced conventional development models; the preference is to shift the emphasis from agriculture to manufacturing and services. The figures for the Gross State Domestic Product (GSDP) – the total of value added by different economic sectors (agriculture, industry and services) – for the period 2017-18, for example, shows that while the tertiary sector (trade, hotels, restaurants and services) contributed 39.61 percent to the state’s economy, it registered the fastest growth at 13.34 percent. For the same period, the secondary sector (paper mills, sugar mills, distilleries), which comprised just over 49 percent of the economy, grew at 9.40 percent. For the year 2018-19, the break-up of the GSDP in the tertiary sector was 41 percent, and the secondary sector was 48 percent, while the primary sector stood at 11 percent. These numbers clearly explain why rural to urban migration is happening, with the 2011 Census noting that 1065 villages had turned into ‘ghost villages’ with non-viable populations.

This discernible spike in environmental volatility has led many to speculate that a reckoning may be in the offing over the fraught relationship between environmentalism and developmental politics in the region.

However, the nationwide lockdown of 2020 due to COVID-19 fuelled a dramatic reverse migration, in which the Uttarakhand State Migration and Rural Development Commission recorded the return of 357,536 migrants. By the end of September, though, 71 percent (or 252,687) remained while over 100,000 left for work elsewhere. The Commission also noted that the migrants possessed skills ranging from software designing to plumbing. The harsh lockdown revealed that Uttarakhand, despite years of manufacturing and service sector growth, continues to be a net exporter of human resources.

There appears to be a widening policy disconnect between Uttarakhand’s inherent geological instabilities, increasing vulnerability to climate change and its manufacturing and service sector-based development strategy; a policy disorientation that is further aggravated by the recent decision to greenlight the Char Dham project.

Uttarakhand was granted full statehood as recently as 2000, based on the claim that the unique mountain ecology required an altogether different development imagination.

In December 2016, the Government of India launched the INR 120 billion Char Dham Highway Development Project (CDHD), which aims to connect the religious sites of  Yamunotri, Gangotri, Kedarnath and Badrinath by ‘upgrading’ 900 kilometres of road. The economic belief is that the CDHD would encourage mass religious tourism, which, in turn, would generate a huge demand for hotels, restaurants, lodges and other tourism-related services. Moreover, the high labour requirements to run the hospitality industry also added to the belief that the project could substantially reduce the outward migration of people from the state. On the minus side, however, road building would involve cutting deep into the steep hillsides to achieve the required width of 10 metres, thereby destabilising slopes, causing soil erosion, increased deforestation and leading to more landslides.

Given such obvious environmental risks, the CDHD immediately ran into trouble. Following mass protests, the Indian Apex court in 2019 chose Dr Ravi Chopra of the Dehradun-based People’s Science Institute to head an expert committee for monitoring the project. While Chopra’s criticism of the CDHD’s road-widening plans has been widely reported, his pleas for an ‘indigenous development vision’ remain less discussed.

The return of disaster governance

In a 2014 report published by OXFAM titled Uttarakhand: Development and Ecological Sustainability, Chopra outlined what a community and livelihood-centred development strategy could look like. This plan calls for a robust financial architecture that enables community-based afforestation, the growing of remunerative niche crops in mountainous regions and encouraging small scale animal husbandry for dairy and poultry. Interestingly, the report urges micro and mini-hydro projects and roads repurposed to meet local needs first and kept sustainable and safe by remaining within community control. Tourism, likewise, is to be community-focussed and dispersed rather than concentrated within a few locations.

There appears to be a widening policy disconnect between Uttarakhand’s inherent geological instabilities, increasing vulnerability to climate change and its manufacturing and service sector-based development strategy.

In contrast to solely arguing for local community empowerment, Chopra makes a case for the return of state and government involvement. He points out that handling climate change impacts and dealing with the aftermath of earthquakes and floods will require substantial state infrastructure. These disaster responses and management, moreover, are principally viewed as state delivered public goods – evacuation, training rescue teams, compensation, relocation of affected communities, providing early warning systems and bearing the costs for post-disaster rehabilitation. On the other hand, no significant role is envisaged for ‘private services’ or market logics (insurance and personal initiatives), nor are local communities expected to carry the full costs and responsibilities for maintaining preparedness infrastructures and emergency capacities.

Harsh Dobhal is Visiting Professor in the School of Media and Communication Studies, Doon University, Dehradun, Uttarakhand, India. Rohan D’Souza is a Professor at the Graduate School of Asian and African Area Studies, Kyoto University, Japan.