The move to ban Hindi films and serials in Manipur has had an unexpected consequence: the Koreans have moved in. 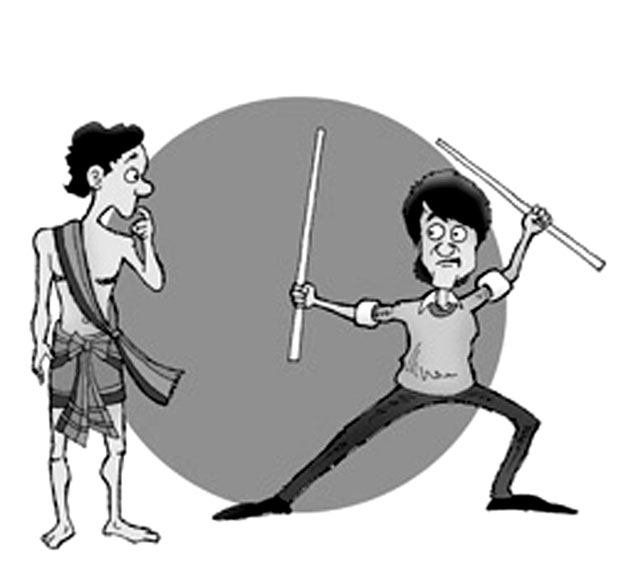 Manisha Koirala looked resplendent in a white kurta and an angelic smile, her orange dupatta flying as she swung back and forth to the tune of ‘Pyar hua chupke se’. The scene is from 1942: A Love Story, the last Hindi film I remember watching on the big screen in Manipur. That day my friends and I had skipped school, where I usually sat comfortably in the back row. In the theatre, sitting in the front row and watching Manisha tower over us, was painful on the neck. But who could have known that this was to be the last Bollywood-induced neck strain I was to feel in Manipur?

This was back in 1995, at a time when the cinema halls in Manipur showed mostly Bollywood and a few Hollywood films. A Manipuri film was also released around that time, Madhabee, and became a big hit. Yet the vast majority of the time it was posters of Shahrukh Khan, Salman Khan, Madhuri Dixit, Raveena Tandon, with an occasional Sylvester Stallone or Arnold Schwarzenegger, that occupied the hoardings and public walls. Over the following decade, however, the Bollywood posters slowly began to vanish, followed by the Hollywood posters. The last I heard about a Hindi film being shown in a Manipur theatre was Hum Dil De Chuke Sanam, in 1999.

The following year, in September 2000, a separatist group known as the Revolutionary People’s Front banned the screening of Hindi films in the state, along with the distribution of all Hindi satellite channels. Considering Hindi films to be a form of cultural imperialism, the group said that Bollywood was undermining the culture of Manipur. Soon there was no trace of Hindi films, television serials, song sequences or even songs on radio stations in Manipur. Except for the government-controlled Doordarshan, all satellite channels broadcasting Hindi films and serials quickly disappeared.

The ban had a significant and immediate impact on the local culture, at least that which had sprung up in recent decades. During Holi in Manipur, where the festival is celebrated over five days, the final day’s chitrahaar had always been a wildly popular event, at which the youth would dance to current hit Hindi songs. (Many years back, my brother met his future wife at such a festivity, while she was dancing to ‘Mere haathon mei nau nau churiya’.) At this event during the years after the ban took hold, the vacuum was temporarily filled by songs in South Indian languages, as well as Bengali, Punjabi, Bhojpuri and so on. On television, too, serials and whole channels in these languages were briefly screened. But these proved unable to sustain the interest of Manipuri audiences.

Today, some of this vacuum has been filled by the digital film industry. This has allowed a new, local industry to evolve by taking advantage of the low cost of producing digital films, giving rise to such stars as Sadananda, Kaiku, Kamala, Maya Choudhuri and Olen. One might have thought that Manipuri culture had been put on a firm footing, but, in fact, a whole new media – and cultural – invasion was waiting to take place.

The primary source of entertainment – television – took a long time to be replaced. Eventually, this void was energetically filled by a Korean satellite channel, Arirang TV. The public response to Arirang soon grew into a true craze, as the 1990s popular fixations with the Ramayana and Mahabharata were soon replaced by Korean serials. Every weekday night, Manipuris all over the state sat at home, glued to Korean serials and films such as My Sassy Girl, The Classic, Moments to Remember, Full House and the like – films and serials that come with English subtitles, and have simple and easy-to-understand plot lines. When my nephew was barely two years old, he picked up a word from one of these serials, which was about kings and warriors. Every time he wanted something, he would say “San-ga-mama”, Korean for ‘your majesty’.

Understandably, the serials have led to significant and multiple impacts on the daily lives of Manipuris, to the extent that the ‘cultural imperialism’ argument that led to the banning of Hindi entertainment looks even more pertinent today. This starts in the mornings following certain serials, when related discussions continue on whom the good-looking doctor should marry, for instance, or whether a long-ailing character will die. An interesting process of identification has also taken place, with many noting that Korean traits seem similar to those of Manipur. Today, there is a clear trend towards eating from bowls with chopsticks. Likewise, excitement ripples through the room any time Korean actors display a manner or expression that seems familiar. Given that the channel also airs lessons on the Korean language, many people have even started using snatches of Korean on the streets. It has become quite commonplace for young girls to gossip openly in Korean: though not fluent, they are able to communicate with a level of secrecy. It has also become fashionable to greet or thank someone in Korean.

Youngsters have begun to look up to Korean actors as role models. Many find it easier, and more sensible, to fashion their looks on the Mongoloid features of a Korean actor, than to try to emulate Deepika Padukone or Saif Ali Khan. Today, no upwardly mobile young girl would be seen wearing a salwaar-kameez, preferring trendy skirts and dresses instead. Similarly, older sections of society have found Korean mannerisms to be far closer to their own than the bejewelled kanjeevaram-clad daughters and mothers-in-law engaged in family duels in the popular saas-bahu soaps. Young crowds have begun to find the Manipuri films’ aping of Hindi films less than attractive. The impact of Korean fashion has truly transformed the way that young Manipuris dress and style their hair, to the point that many youths look surprisingly similar, and Korean! There have also been noticeable changes in body language, and there is a casual flirtatiousness among youth never before seen on Manipur streets.

All of this has evolved into a way of being hip and fashionable without getting on the wrong side of the rebels who manage Manipur’s parallel governance structures. This has given the people a sense of freedom to aspire to something without feeling as though they are inviting trouble. Indeed, for a society that has long been marked by suppression (and a lack of entertainment), coupled with having had to pay a heavy price due to the ongoing violence, the outlet created by the ‘Korean wave’ seems to have offered a much-needed distraction.

For now, the ironies seem to be accepted with an amused detachment in a state that had long forgotten the term ‘normality’. In the midst of continuing daily killings, extortion, protests, failed infrastructure and ill-maintained law and order, the new generation is studiously identifying itself with a country that is both developed and peaceful. Whether positive or negative, this dramatic sea change in ‘local culture’ has certainly forced Manipuris living outside of the state to work hard to catch up with the new face of the hip crowd.

~ Akoijam Sunita is a freelance filmmaker and writer. She’s a keen observer of society and professionally engages with social and cultural issues. She dabbles in issues concerning the outcome and impacts of armed conflicts on society.