Skip to content
Bangladesh > The crisis in Bangladeshi democracy

The crisis in Bangladeshi democracy

Podcast interview with activist Khushi Kabir on what the results of the 2018 polls mean for Bangladesh. 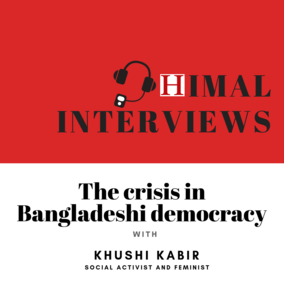 The December 2018 general election in Bangladesh was marred by violence and allegations of vote rigging by the ruling Awami League, which won over 80 percent of the seats in the Parliament. With virtually no opposition in the house, and given the recent crackdown on the streets and the new draconian Digital Security Act, the future of democratic governance in the country looks tenuous.

In this episode of Himal Interviews, we met up with Khushi Kabir, a social activist and feminist who has been working on grassroots democracy in Bangladesh for over four decades. She spoke to our Editor Aunohita Mojumdar on the irregularities in the December polls, the state of political and civic opposition, and the crisis of Bangladeshi democracy.