The emergence of a Dalit identity in Punjab is a recent development, spurred in part by the failure of Sikhism to abandon caste discrimination. 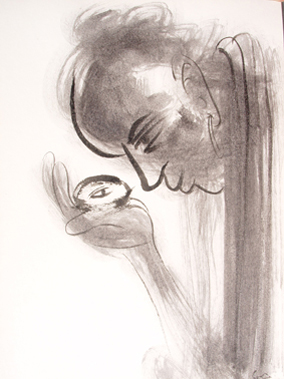 These are lines from the last poem of Lal Singh Dil, hailed as the foremost revolutionary poet of Punjab. He passed away in 2007. The despondent note of the poem is both surprising and telling, for a poet who had once declared that the song and dance in his heart would not die, no matter how dire the circumstance. It took Dil a lifetime to discover this sad yet provocative truth, against the backdrop of the complexities of caste in Punjab. Yet centuries before Dil’s birth, the same frustration with caste was intricately linked to the emergence of the Sikh religion.

When Sikhism came into being during the 15th century, it was primarily as a protest against the caste system, in the same manner that leftist and other progressive movements came into being in reaction to a similar malaise of the modern times. In this context, the road to the Dalit identity has been a long one in Punjab, largely because such an identification was submerged in the Sikh identity, with much pride and celebration in the earliest known Dalit writings of the 17th century. The celebratory mood was one of overcoming the ills of caste-ridden society. In time, however, the tone saddened, as a religion that had started out to reform Hinduism fell prey to the same ills of caste-ridden social hierarchy.

An important point to take away from this historical evolution is that the contribution of those from the ‘low’ castes has never been wanting, as far as struggle and movements for social justice go. The story that was the turning point for the lower castes in Punjab was that of Jaita, a follower of Guru Gobind Singh. Jaita played a significant role in bringing the severed head of Guru Tegh Bahadur, the ninth guru of Sikhism, back to Anandpur Sahib in Punjab, after he was executed by Aurangzeb in Delhi in 1675. Seeing this act of bravery and sentiment, Guru Gobind Singh adopted Jaita as his son. As such, a popular rhyme in Punjab goes, “Ranghreta guru da beta; The scavenger is son of the guru”, as Jaita belonged to the community of ranghrets, scavengers, who had converted to Sikhism. Bhai Jaita, who died fighting the last battle for the guru in 1705, was the first known Dalit poet of Punjab. As Raj Kumar Hans, a professor of history, has pointed out:

In its true egalitarian spirit, Sikhism had succeeded in integrating the lowliest of the low, the former untouchables, the dalits, into its folds… The way Bhai Jaita was integrated not only in Sikh religion but also in the family of Guru Gobind Singh, it is understandable that any other identity would have been meaningless to him.

Thus Bhai Jaita cries out in thanksgiving, “O! Jaite the saviour Guru has saved the ranghretas/  The pure Guru has made us his sons.”

Disowned ranghreta
The second known Dalit writer of Punjab was Peero Preman (1830-1872). Peero had earlier been a Muslim courtesan named Ayesha, and later joined the Gulabdasia sect and inherited sainthood from her mentor, Gulab Das. Ditt Singh Giani (1852-1901), another Dalit writer, also made significant contributions to Punjabi literature, particularly in terms of defining Sikh thought. He was also founder-editor of the newspaper Khalsa Akhbar in Lahore. Similarly, Sadhu Daya Singh Arif, also a Dalit, (1894-1946) was a theologist and writer who enjoyed great popularity.

Before we step into modern times, it is important to note the reasons for Dalits moving out of the Sikh fold. To begin with, Punjab has a higher percentage of Dalits than any other state in modern-day India, making up almost 30 percent of the population. However, this community owns just 2.3 percent of the cultivated agricultural land in the state. Some 70 percent of Sikhs live in rural Punjab, as did a major chunk of the Dalits who worked as labourers in the fields before they moved to other jobs, making way for migrant labour to take their place. The relationship between the Jat landlords and their landless labourers was a complex one. The lower castes worked with the upper-caste Jats and, although the ‘otherness’ was the accepted order, there were instances of close bonding and even addressing elders as uncle (chacha or taya) or aunt (bhua or masi). The experience and skills of the elders were respected; tilling of the land was a shared task, and the relative well-being of everyone depended on it. This is articulated best in the lines of the celebrated Dalit revolutionary poet, Sant Ram Udasi: “The farmer embraces the labourer and weeps/ Water flows from the stacks of ruined crops.” The lower castes took on the caste name of their masters, and it was natural that there were amorous ties. Yet the clear-cut caste divide was always there – as were separate wells for drinking water, and separate cremation grounds.

While Sikhism did not, in principle, recognise caste, in practice it carried Hindu caste prejudices – hierarchies that went into Christianity and Islam as well, when conversions took place. In the customary scheme of working relationships, outcastes such as Mazhabi (chura or sweeper Sikhs), Ramdasi (chamar or leatherworker Sikhs), Balmiki, Ravidasi, Musalli, Teli, Mochi and others were not allowed to own land, but were allowed to build temporary structures on the shamlat, or village common land. How Dalits continue, even today, to be the wretched of the earth can be seen in the village of Badal, home to the ruling family of Punjab. Against plush structures of the Badal clan, fancy rest houses and more, the Dalits live in filth and squalor on the western side of the village – a common practice, lest the rays of the sun be ‘polluted’ before reaching the upper-caste homes. None have the foresight, compassion and love of the Tenth Guru to be able to see the outcaste ranghretas as their own.

It is against this backdrop that contemporary Dalit writing emerged. The early Dalit writers of modern times were distinctly leftwing in their approach, with a strong belief in an equal social order. And with this began the emergence of Dalit consciousness. The first poet to voice these concerns was Gurdas Ram Alam (1912-1989). Born in a poor Dalit family in Bundala village in Jalandhar District, Alam sang about the deprived and oppressed-caste communities with a hopeful and celebratory note for the future:

Oh! The untouchable, open your eyes and see
I have a prescription for thee
Strength, unity and education will set you free.

Direct descendants of Alam’s creed were Sant Ram Udasi (1939-1986) and Lal Singh Dil (1943-2007), revolutionary poets whose work served as inspiration for the Naxalite uprisings of the 1960s. If Udasi calls out, “Smile Forever O’ Sun on the Hutments of the Workers”, Dil sees joy in the dance of the little children as their mother cooks the evening meal:

Celebration and pride are a part of the Dalit writing of Punjab, even as irony, loss and deprivation are never absent.

In this context, the past decade has also seen the emergence of the autobiography, including those of Dil, Madhopuri, Prem Gorkhi and Attarjit. The latter two are accomplished short-fiction writers, and have explored the Dalit consciousness through their reality. These stories bring to the fore many truths we wish to ignore. In addition, Gorkhi and Attarjit, Des Raj Kali, Bhagwant Rasoolpuri, Mohal Lal Phillauria and Nachhatar are among other contemporary fiction writers exploring the Dalit consciousness. For instance, Attarjit, in his celebrated story ‘Thuan’ (Scorpion), studies the caste divide from a different angle. The low-caste worker, who once worked as a daily-wage earner in Jat fields, is now an educated, prosperous lawyer who lives in the city, and has taken on an urban, upper-caste second name. In the wake of an agricultural crisis, a son of the Jats is forced to do construction labour at the former’s house. The caste prejudice now flares up in reverse, shattering two worlds.

At present, Dalit and women’s writing are occupying centre stage in the world of Punjabi letters, motivated as they are by the struggle against oppression. This is because what is counted as ‘mainstream’ literature is related neither to struggle nor social justice. Bhagwant Rasoolpuri, in his brilliant story ‘Kasoorwa’ (Sinful), raises the issue of the Dalit woman. This is the rambling memoirs of an old woman, one who knows that keeping body and soul together is not for the wretched, and that a woman is damned not only by the other but also by her kin.

‘No caste’ in Pakistan
Across the border, meanwhile, in the context of Pakistani Punjab, there is ample evidence of Dalit identity submerging itself in the Muslim one. Sadly, however, the Hindu malaise of the caste system was transferred even to Islam, and caste stratification can today be found in Pakistan. Indeed, the titles used in the two Punjabs for Dalits who were taken into the folds of Sikhism and Islam – mazhabi (one who has a religion) is used for the Dalit who embraced Sikhism, while and musalli (one who offers prayers) for those who have embraced Islam – are technically positive, but are generally used offensively. This implies that a change of name need not necessarily be accompanied with a change of attitude.

In contrast to the situation in Indian Punjab, Pakistan does not have Dalit writing as such, unlike the voluminous writing on the Dalits in India, especially from the left. In East Punjab, in his classic novel Marhi da Diva, Gurdial Singh immortalised Jagsir – the landless protagonist who toils and dies unsung but for the wife of the upper-caste Jat, who goes and lights a lamp on his humble tomb, as they shared unexpressed love for each other; and in West Punjab, meanwhile, Major Ishaq Mohammad, founding president of the Mazdoor Kissan Party (MKP) and a revolutionary thinker, poet, playwright, told the unhappy tale in his very popular play called Musalli. Ishaq Mohammad, the son of a peasant, had a great aptitude for learning, and secured scholarships all the way through his enrolment at MAO College in Amritsar, where Faiz Ahmed Faiz was among his teachers. His studies were interrupted only by the onset of World War II and, like Faiz, Ishaq decided to join the British Indian Army to oppose the Nazi invasion of the Soviet Union. Later, both Faiz and Ishaq were implicated in the attempted coup of 1951, better known as the Rawalpindi Conspiracy, and imprisoned. It was in jail that Ishaq wrote Musalli, which chronicled the deeply rooted apartheid in Punjabi society – a fact that many Pakistanis are loath to admit, because they believe that Muslims cannot practice caste-like discrimination.

Yet writers in Pakistan admit that caste prejudice is alive and kicking, living on in rules regarding kitchen utensils and those preventing inter-marriages. The word chura (sweeper), for instance, ranks among one of the most common abuses. Even Mohammad Iqbal, the great reformist poet, lamented in one of his couplets:

You are syeds, mirzas and Afghans
You are everything but Muslims.

~This article was first published in April 2010 and is a part of our Dalit History Month series where we will be posting past articles on the question of Dalit identity, politics and history throughout the month.

~ Nirupama Dutt is a Punjabi-language poet and journalist.