Despite stubborn US efforts to defend armed drone strikes, in the targeted areas they are rightly seen as a travesty and a tragedy. 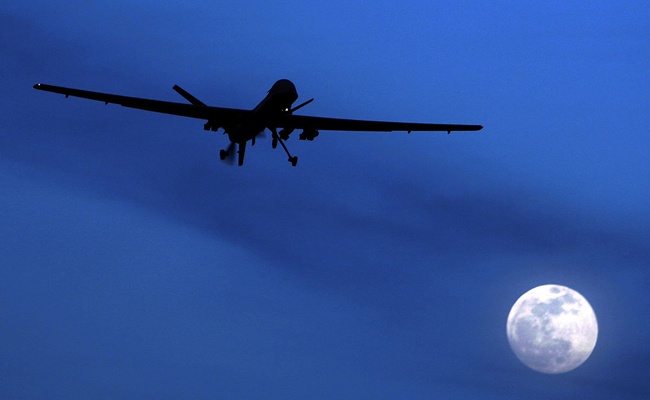 The world has witnessed an aggressive increment in the military use of drones, or unmanned aerial vehicles (UAVs), over the past ten years. Originally intended for surveillance and intelligence purposes, armed drones have recently been used to launch missiles and bombs at ‘suspected’ targets in ‘volatile’ regions located in West Asia and Southasia. The US military has used drones in Afghanistan since 2001, in Iraq since 2002, in Yemen since 2002, and in Pakistan since 2004. Nor is the US the only country to use drones for offensive military purposes: the UK initiated drone strikes in Afghanistan in 2007, and Israel has used them in Gaza since 2008.

There is no doubt that drone strikes have caused civilian casualties, but calculating the number of casualties has been very difficult both because drones are often used in remote areas, and also due to the strict secrecy surrounding these strikes. The New American Foundation, a US think tank, estimates between 1870 and 2873 total deaths from drone strikes in Pakistan since 2004, of which an estimated third were civilians. The website Pakistan Body Count suggests a far higher proportion: 50 civilian casualties for every militant killed. Independent investigations by Al-Jazeera show between 391 and 780 civilians killed since 2004.

When considering these figures, the controversy surrounding the label ‘Militant’ is also rightly an extremely important issue. There is currently no agreement on how precisely to distinguish an innocent individual from a militant or insurgent. Is any young male in a tribal agency in Pakistan truly a ‘terrorist’, as the governments using drone strikes would have us believe? And even so, does that justify the extrajudicial killings of these human beings via drone strikes?16-year-old Tariq Aziz, killed alongside his 12-year-old cousin in a drone strike in Waziristan last year, is just one example of the many innocent civilians indiscriminately killed in these attacks.

To understand the objection to drone strikes, it is important to understand the nature of this particular method of executing civilians overseas. Correctly dubbed the ‘Playstation Mentality’ by many human rights activists, the core concern over drone strikes is how the geographical and psychological distance between the drone operator and the target is very much like that between a gamer and an opponent in a video game. This delusional distance between imagination and reality dangerously lowers the threshold for launching an attack, and subsequently makes it more likely that weapons will be used against the ‘enemy’. Being a gamer myself, I am naturally unsettled by the mindset of young military personnel using joysticks some 12,000 km away in the Nevada desert to determine whether Target A in Waziristan is worthy of a drone attack.

Even more disturbingly, instead of seeing actual human beings, these US military personnel now only see simple blips on their screens. In one report, a member of the US Army explained how in military slang, as soon as the drone strike is carried out, the dead body is humorously called a ‘bugsplat’. This is precisely how a culture of convenient killing grows stronger and more indiscriminate in its barbaric execution of unknown human beings. Modern technology has made the act of killing incredibly easy by lowering both the costs and the risks for the executioner.

There is currently also intense criticism against the notion of ‘Targeted Killings’ – the term currently preferred by those carrying out the strikes – which is essentially just a euphemism for extrajudicial execution. Philip Alston, a former United Nations Special Rapporteur, has challenged the US and the UK to provide a legal basis and explanation for the arbitrary killings resulting from their drone strikes. Human rights activists from Reprieve and other organisations have also demanded an explanation of the reasoning behind the now common practice of ‘posthumously’ proving a civilian innocent. The accountability-vacuum in this case is astoundingly massive and blind, which is one reason fuelling anti-US (in specific) and anti-Western (in general) sentiment in places where the drone strikes are occurring. Far from resolving conflict or even addressing legitimate security issues, drone strikes have only catalysed livid anger, mistrust, and an ever-growing chasm between human communities.

That truth is evident even outside the targeted regions. David Kilcullen, a former Pentagon adviser to General David Petraeus, called on the US House of Representatives’ Armed Services Committee to stop drone attacks over Pakistan. In Kilcullen’s words:

The drone strikes are highly unpopular. They are deeply aggravating to the population. And they’ve given rise to a feeling of anger that coalesces the population around the extremists … If we want to strengthen our friends and weaken our enemies in Pakistan, bombing Pakistani villages with unmanned drones is totally counterproductive.

Some within the US military have also expressed concern. US Army chaplain and ethics instructor Keith Shurtleff has said:

As war becomes safer and easier, as soldiers are removed from the horrors of war and see the enemy not as humans but as blips on a screen, there is a very real danger of losing the deterrent that such horrors provide.

Deluded defence
Still, others have often expressed the opinion that Pakistanis in the targeted areas actually want drone strikes against ‘terrorists’. Even conceding that there are indeed elements of extremism in these areas that need to be addressed, such dubious assumptions are eerily reminiscent of the start of the invasion of Iraq, when pro-war voices used similar ‘saviour’ rhetoric in an attempt to justify the violence. Despite any pretentions to objectivity and benevolence, this stance completely ignores the victims and their many cries for justice for their dead loved ones. Shahzad Akbar of the Foundation for Fundamental Rights recently made that point starkly clear on the US radio show Democracy Now! Yet few in the US seem to be listening. The continuing tragedy of overwhelming civilian deaths is simply brushed aside as collateral damage necessary for the ‘greater good’.

When asked whether there is any local support for drone strikes, a recent arrival in Lahore from one of Pakistan’s tribal agencies reflected on a painful dilemma. His answer, translated here from the original Pashto, shows a population keenly aware of the many forces responsible for their suffering:

When the drone strikes started, the people thought the dehshat gard (terrorists) would be gone. They only supported [the strikes] when they attacked terrorists, but [in fact] mostly civilians are killed. No one admits that, because it’s not just America doing it. The Pakistani military and government approved of the strikes too. But then ISI (Pakistan’s Inter-Services Intelligence) also supports some terrorist groups. There’s very little positive result coming from these strikes. It’s confusing and painful for the people there. They are very angry at America’s government and army and Pakistan’s federal government plus the ISI and FCR (Pakistan’s Frontier Crimes Regulation laws).

In a case study published in the Los Angeles Times on 2 May 2010, one survivor graphically described the tragic outcome of a drone strike gone wrong:

Black smoke and dust choked villagers as they dug through the rubble. Four-year-old Zeerek’s legs were severed. His sister Maria, 3, was badly scorched. Both were dead. When their cousin Irfan, 16, saw them, he gently curled them into his arms, squeezed the rumpled bodies to his chest, lightly kissed their faces, and slid into a stupor.

This incident, along with many others, forces us to question the myth of the drones’ effectiveness. Proponents of armed drones argue that they are highly efficiency in a 4D environment – military jargon Dangerous, Deep, Dirty and Dull. Yet drones do not come cheap. In July 2010, the Los Angeles Times reported:

Thirty-eight Predator and Reaper drones have crashed during combat missions in Afghanistan and Iraq, and nine more during training on bases in the U.S. — with each crash costing between $3.7 million and $5 million. Altogether, the Air Force says there have been 79 drone accidents costing at least $1 million each.

The other part of the drones myth has to do with how ‘productive’ they are in ‘controlling extremism’. Mahmood Shah, a retired Pashtun brigadier from the Federally Administered Tribal Areas (FATA) in North West Pakistan where many of the drone strikes have been taking place, says that the families of drone victims go on to ‘seek revenge’, making them ideal recruits for the Pakistani Taliban. Baitullah Mehsud, a Pashtun Taliban commander until his own death in a US drone strike, liked to boast that each drone attack “brought [him] three or four suicide bombers.”

As affected Pakistanis suffer mental trauma due to drone strikes, and with the ever-increasing tensions between the US and Pakistan, drones worsen the situation exponentially. With no transparency, accountability or oversight, proponents of drone strikes are still free to expound on regional peace while conveniently forgetting that real peace is never attained by bombing civilians and their homes to smithereens. Many US pundits remain especially oblivious to the fact that a foreign policy pumped up on megalomania and delusions about its ‘accuracy’ must, in the end, face extreme backlash from the people who suffer from it. The corporate media, bent on rehashing the same old rhetoric emerging from the White House and even the Pakistani Government, ignores the need to protest against these policies, whether at home or abroad.

It is ironic that our so-called leaders can continue to blindly claim to be pursuing peace through their jingoism and warmongering. Little do they realise that the best path to prosperity, protection and peace is never through the deadliest weapons, but through a commitment to sustainable and equal human security that places the most vulnerable and victimised at its core.

~ Mehreen Kasana is a blogger, student and former teacher based in Lahore. She tweets at @mehreenkasana and blogs on WordPress and Tumblr.