As the Devadasi system dies out, so too does a rich musical repertoire. 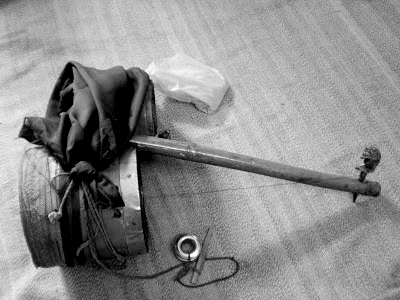 The complete ensemble of a Chowdike Pada / September 2010 Himal Southasian

´These instruments, they demand a lot. She demands a price every time she has to come out of the bag,’ Imla Santappa Halsapor says, lovingly caressing the hollow drum she carries. Her lips are attempting a slow smile, but her eyes have a faraway look; perhaps she is thinking of earlier days, when the business of living first required reverence to the goddess Yellamma and only thereafter the act of pleasing a partner. Undoubtedly, times have changed. And so has the Devadasi system and all that the dedication of these girls entails – to themselves, to their customers and to the local community.

The women sitting together have little in common. The oldest at about 65, Yamunavva, utterly gorgeous and still shockingly bold in the things she says to men, is from the richer lot. Her gold chains, cotton sari with zari – a form of intricate embroidery using gold and silver threads – border and the heavy natt, the pearl-and-gold nose-pin, are proof of her high standing in the local community. They also indicate the wealth of her hiriyavaru, the permanent partner that the Devadasi can take on, apart from other customers.

Then there is Reshma Taugeri, 34 years old, almost fragile and unable to work her drums fast enough to keep up with Imla, in her fifties, from neighbouring Mahalingapura. Imla, of the older lot, is draped in a simple sari, for her hiriyavaru died almost 25 years ago. Her feminine charms are restricted to the coquettish lyrics of the Chowdike Pada, the traditional verses in which Devadasis are trained, accompanied by the tingle of her two dozen green bangles.

One of the few commonalities between these women is that they are all jogathis, servants of Yellamma, who is worshipped in some parts of Karnataka. There is a second link, as well: none of them wants their art form to survive, the thousands of songs in which they are versed being an integral part of the repressive system that they are now collectively fighting to eliminate. They say that the youngest Devadasi is now in her late 20s or early 30s; there have reportedly been no fresh dedications in the past few years, though the Karnataka state government banned the practice way back in 1982.

The women, sitting in a small town called Mudhol in Bagalkot District of north Karnataka, say that these songs will disappear soon. And with them will go the knowledge of practices, rituals, stories and histories of people that they have incorporated in those simple lyrics. Perhaps unsurprisingly, none of these women, amongst the better educated in their community due to their training in the mythologies of their gods and the people who worship them, seem particularly sad about the possibility of another rich tradition slipping into memory. What will happen to the songs and traditions if there are no new entrants into the Devadasi system? In their answer, they are unanimous. ‘We know that the songs will disappear,’ says Imla. ‘But it is ok,’ interjects Yamunavva. ‘We are not too sad about our traditions disappearing, because they are part of a system that we don’t want to be passed on to the next generation.’

Already, the younger Devadasis do not know the songs sung by the seniors such as Yamunavva, who, as a ‘master’, remains involved in overseeing the music education of the recent inductees. The younger ones have to egg her on before she sings a verse in soprano. ‘I don’t know the origins of these songs,’ she says. ‘But these instruments give us the inspiration to sing in praise of Yellamma. When we have them in our hands, there is a respect we command. Everyone knows we are jogathis.’

A hollow drum with a long handle called a sutti, a pair of tala (small cymbals), a smaller drum called a chowdiki and a small bag for alms makes up the ensemble of the Chowdike Pada. A cane basket called a jaga on the head and a cane bowl or hadligi for alms make a woman a jogathi. The concept of the male and female forms, and their joining together, is integral to the Devadasi tradition. The sutti becomes the male, the chowdiki is the female and ‘perfect’ music is made only when the two join together. Made from wood and covered at the bottom with a calf’s skin, the drums are decorated with zari and silk.

The passing-on of the tradition starts with a devadi charitre (history of gods), in which an initiate is taught the old stories in song. These are part of a rich oral tradition, though some jogathis today make note of the lyrics in unassuming ruled notebooks, possibly the only documentation of the songs that will be left in a few years time. Some enterprising Devadasis have also recorded cassettes, which are sold at Yellammana Gudda at Savadati in north Karnataka, the Mecca for devotees of the goddess.

As is common in Hinduism, Fridays and Tuesdays are especially auspicious days for these nitya sumangalis or eternal brides. Because the death of their partner does not give them the status of widowhood, their blessings are greatly sought after, and on these two days their songs are widely heard. Families invite the women, usually five at a time, to sing songs of their favourite gods at weddings or other ceremonies, where their hands are typically washed in ghee and milk before being served a feast. Indeed, only after the Devadasi begins to eat will the rest of the people be served, and invariably gifts of money and saris follow.

Back in the room with the rest of the Devadasis, Shivalingavva and Sangitha Kadakad’s voices are the most inaudible in the group. They have not learned too many songs, as both are in their early thirties. ‘Each village will have a different set of songs,’ says Shivalingavva. ‘The lyrics may be modified too depending on the situation. There are common songs too, but every village in the district might have some variations, some local flavour.’ For instance, Sangitha continues, ‘When there are visitors, we may add their names and welcome them, or use the name of a god who is the favourite of the family that we sing for.’The singing at functions sometimes also takes the form of a Chowdike Pada competition. ‘Sometimes, the family that invites us might ask for two groups to be present,’ explains Rekha Gadi, a jogathi in her thirties. ‘One sings of the gods while another sings praises of goddesses. We call it Haradeshi-Naageshi, a local name for the event, and it is a competition that goes on all night. By morning, the two groups abandon trying to gain the advantage and become one.’

In addition to singing about the goddesses, Devadasis are also widely believed to have healing powers. A woman without a child might seek their blessing and beg for a rupee with which to pierce the ear of the baby after its birth. Another might seek a cure for a disease by feeding a group of five Devadasis lavishly. The Chowdike Pada itself becomes a tool for education of sorts. For wives in villages, there were lessons in hygiene, on how to care for a newborn, on how to be healthy in each month of pregnancy, even tips on how to seduce the wayward husband and keep him home. All such information is included in the Devadasis’ songs. In villages where wives rarely had access to such information, the Devadasis thus took up the task of educating the women with whom they came in contact.

For the chosen only

Imla heads back to her village of Mahalingapura, an hour’s dusty drive from Mudhol, during which she talks about her Muslim partner, who died in a truck accident nearly three decades ago. His name is tattooed crudely on her forearm, a common practice among the women, whose lives are dictated by passion. The tattoos are equally crudely erased when the man dies or deserts her.

After navigating through narrow lanes full of pigs and open drains, we come upon a small temple, where Imla’s ‘master’, Danamma Poojeri, joins her in singing. The neighbourhood children gather around as the crescendo builds; the drums strike a seemingly primitive beat and the kids, some naked, some still in school uniform, quiet down, awed. They will listen, but can never learn to sing these songs. Only Devadasis can ever learn the lyrics or these particular drum beats.

One woman, Danamma, must have taught these songs and dance routines to dozens of others. But her own granddaughter, Asha Poojeri, knows none of them. Asha is a Devadasi herself, but works more as a peer educator on HIV/AIDS-awareness issues with a local NGO. A lineage has ended there already. Imla later tells me, away from the ears of the younger ones, that girls today are interested only in ‘doing sex’, and not in learning the traditions and rituals of being a woman of god.

In truth, the tangled web of rituals that the Devadasis have themselves constructed is proving to be their undoing. For instance, the songs cannot be written, nor can they be learned by most others, not even by all Devadasis. According to Shivalingavva, ‘Only the ones chosen by Yellamma can sing.’ Even the instruments of Chowdike Pada cannot be randomly passed on; the dying Devadasi must appoint a successor to carry the music and the respect along. The music demands elaborate prayers and rituals every Friday, every Tuesday and on every full moon. To the Devadasis, the instruments are just another form of the goddess they revere.

But then, there are no newer aspirants to learn the art, and there are many that say they want the tradition to die once and for all anyway. Today, grumble the elders, the lyrics are increasingly being muddled up, and many of the lines are already being forgotten. Yellamma no longer receives the full reverence she demands. The women say they are okay with the songs not making it through to the next generation. But when they regularly try to correct the singing of the younger jogathis, it seems more likely that they are simply resigned to the inevitable.

Deepa Bhasthi is a writer based in Madikeri, Kodagu. Her essays, journalism and other writings have been published widely in ArtReview, Literary Hub, The Guardian, Hyperallergic, MOLD, Atlas Obscura and elsewhere. The archive of her works are available at https://deepabhasthi.wordpress.com/