The push for Diaspora Direct Investment needs to be understood as an extension of the economic logic of our times. 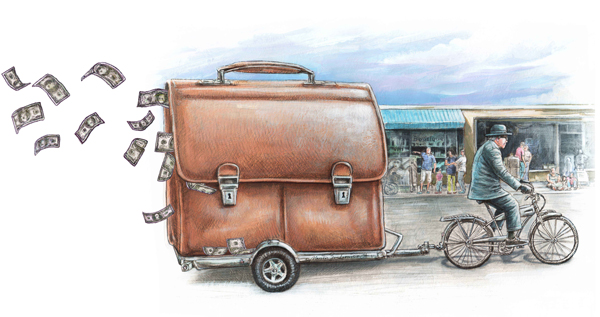 (As Indian Prime Minister Narendra Modi addresses the Pravasi Bharatiya Divas 2015 and assures the diaspora of the “several opportunities” waiting for them, read this extract from our latest quarterly ‘Diaspora: Southasia Abroad’. To read the full article, you can buy the print or digital edition of the issue or subscribe to us.)

On 28 September 2014, a 19,000 strong crowd comprising predominantly of Indian-Americans, gathered in Madison Square Garden in New York City. They were there to cheer on a man who less than a decade ago had been banned from travelling to the US for his role in the 2002 Gujarat massacre. Striding into centre-stage now as the newly elected Prime Minister of India, Narendra Modi thanked the audience for the “kind of love [that] has not been given to any Indian leader ever”. This validation by overseas Indians, he said, was a loan that he would repay by “forming the India of [their] dreams,” by making it easier for the cheering crowds and their extended community to return to India and bring their talents back to the homeland. In less euphemistic terms, Modi’s message, as reiterated in his series of meetings with Indian American entrepreneurs, was that his government was committed to ensuring that India would be open for business, particularly for its diaspora.

‘A time to return’
A few weeks after Modi’s triumphant return from New York, Sushma Swaraj, India’s new external affairs minister, who also happens to be responsible for the Ministry of Overseas Indian Affairs, echoed this message in a different context. Since 2007, the Indian government had been involved in organising regional Pravasi Bharatiya Divas conferences around the world as a way to “allow participation of the Indian diaspora” who were unable to attend the annual meetings held in India. Inaugurating the London meeting in October 2014, Swaraj told her audience that “now is the time to come to India”, since there were “immense opportunities” waiting for them, especially in the fields of “manufacturing, infrastructure development, education, health… science and technology, research and innovation”. To facilitate this participation, the Bharatiya Janta Party (BJP)-led government was committed to providing “efficiency, accountability, speedy decision making… and [a] favourable business environment”. Should the members of the hugely successful overseas Indian community experience any difficulty or bureaucratic red tape in their efforts to return to their homeland and participate in “India’s growth story” all they needed to do was to let the minister know and she would solve their problems.

Any attempt to explain the ongoing feting of the Indian diaspora cannot afford to overlook the peculiar position and role of the BJP in creating what its ideologues have called Vishwa Bharati (Global India).

The fact that the BJP government has been courting a particular layer of the expatriate Indian community by promising new investment opportunities, a more benign bureaucracy, and generally favorable business climes, is in and of itself not particularly surprising. It is a well-known fact that amongst the major political parties in India, the BJP is perhaps the best connected to various diaspora associations, particularly in North America. The Hindutva network, as numerous scholarly and investigative works over the past two decades have pointed out, puts the BJP in a unique situation. The center of this network is of course the Rashtriya Swayamsevak Sangh (RSS), which is a cadre organisation that emphasizes the importance of spreading the ideology of the Hindu Rashtra. The RSS, connected as it is to numerous think tanks, grass-roots and relief organisations, led the initiative to found the Vishwa Hindu Parishad (VHP), the global arm of the movement. Based in India and abroad, these organisations, along with their distinctive women’s groups, have aided the BJP (itself initiated by the RSS and the most important political front for the network) over the past several decades as the party has tried to present itself as representing the aspirations of the Indian people. One aspect of this relationship involves the associations particularly of those based abroad, acting as a public relations arm of the BJP. Another aspect, pertaining to the financial clout of these associations, as well as their direct involvement in buffering the coffers of BJP activists in India, remains somewhat murky. Anecdotal evidence suggests that the much-publicised fundraising drives by various pro-Modi groups (particularly the Overseas Friends of the BJP, which organised over 200 chai pe charcha – conversations over tea – prior to the recent elections) did provide an overseas source of capital to the ruling party. The question of how much this funding amounted to is hard to answer, but it is telling that a recently established organisation like the innocuous sounding Indian American Community Foundation (IACF, described often as an umbrella grouping of three hundred US-based organisations) could host a ‘private’ and supposedly ‘apolitical’ rally in one of the most expensive venues in New York City at the cost of approximately USD 3.5 million, featuring Modi. Given these connections, it is plausible that the moves by the BJP government to create an investment-friendly environment are an effort to repay its overseas constituency for its support in the electoral victory.

Indeed, any attempt to explain the ongoing feting of the Indian diaspora cannot afford to overlook the peculiar position and role of the BJP in creating what its ideologues have called Vishwa Bharati (Global India). That being said, it is perhaps even more important to not over-emphasize this role, for this process of wooing not only pre-dates the current BJP government, but also involves parties from all parts of the political spectrum. In fact, the courting of Non-Resident Indian (NRI) investors began in the 1980s under Indira Gandhi’s government, and gained momentum under the Congress-led government in the 1990s. Even as they announced the adoption of a major structural adjustment program in 1991, then-Prime Minister P V Narasimha Rao’s finessed the theme of the NRI investor as an integral part of the new Indian economy, as someone who could pave the way out of the country’s economic quagmire. The leitmotif of the successful ‘global Indian’ who if given the chance, an efficient bureaucracy, and the removal of outdated state controls, would prove to be a vital resource for a resurgent India, has since then been reiterated in various versions, by every single political party in power. This of course begs the question of why the diaspora-investor is now the Holy Grail for the ruling elite – a question that takes on an added piquancy given two factors.

~Latha Varadarajan is an associate professor of political science at San Diego State University. She is the author of The Domestic Abroad: Diasporas in International Relations and the forthcoming book Imperialism Past and Present (co-authored with Emanuele Saccarelli), to be published by Oxford University Press.