Photo Kathmandu 2018 provided a much-needed snapshot of the history of feminist movement in Nepal. 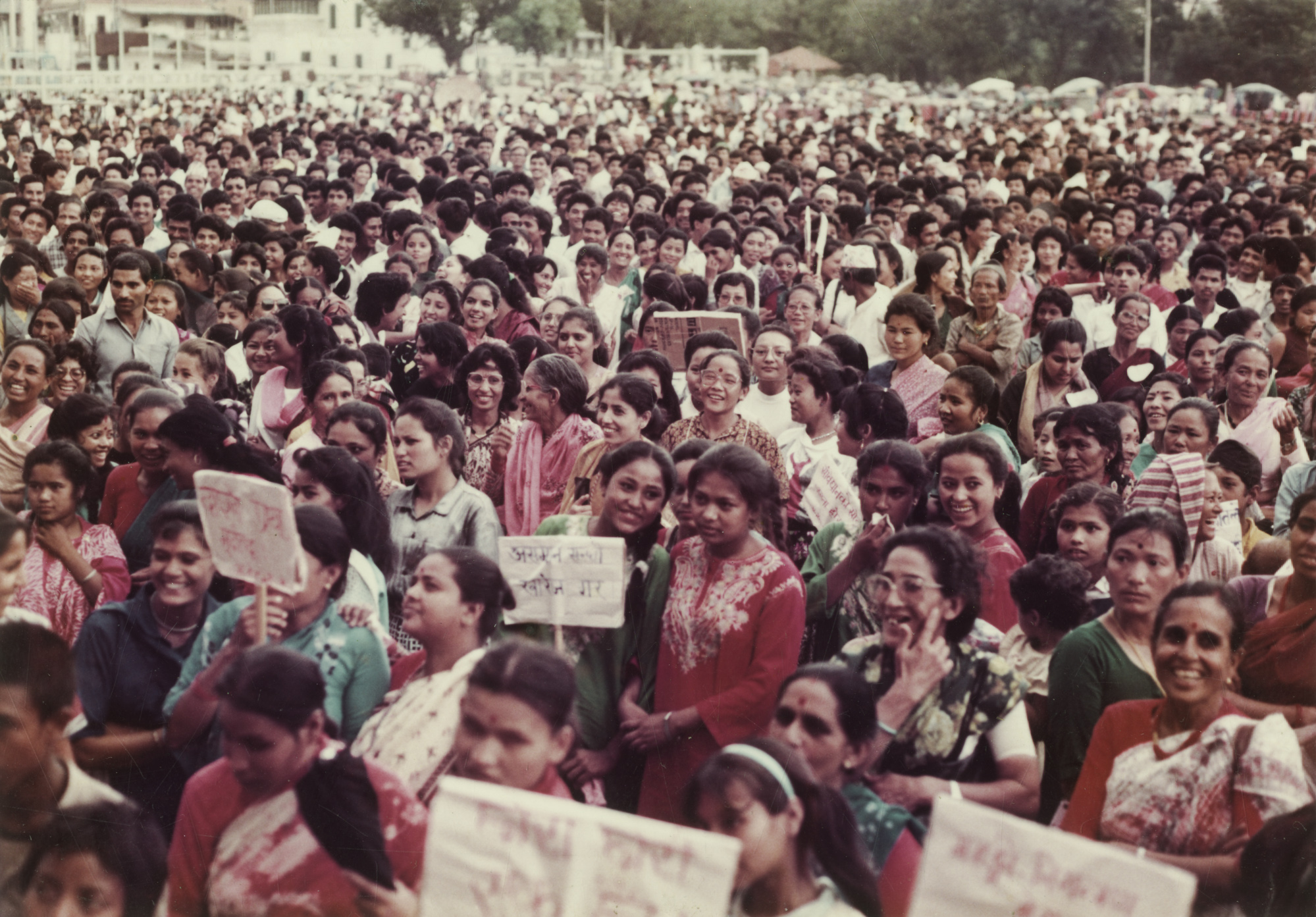 Women from all walks of life gather for a mass meeting in Kathmandu to submit a letter of protest to the government following the rape and murder of sisters Namita and Sunita Bhandari in Pokhara that rocked the country. Photo: Hisila Yami Collection/ Nepal Picture Library

When one thinks of road construction, one often conjures up images of muscular men digging trenches and moving boulders. At this year’s Photo Kathmandu, Nepal’s international photography festival, a photograph from 1956 contradicts this cliché. Taken during the construction of the Prithvi Highway – a major roadway in Nepal – it depicts mostly women labourers, clad in fariya, choli and patuki – a traditional garb of Nepal’s hills – who are armed with shovels, working their way through the road.

This, in a snapshot, encapsulated the third edition of this month-long festival of photography, organised by photo.circle, a Kathmandu-based organisation which also runs a digital archive of photography. Centered around the themes of “gender, power, identity, patriarchy, and sexuality,” this year’s Photo Kathmandu (October-November 2018) seemed intent on challenging received wisdom about the public contributions of women in the making of modern Nepal. With its exhibits placed deliberately and prominently in alleys and neighbourhoods of Kathmandu Valley’s historic towns, along with archival initiatives like the Feminist Memory Project, the festival was creating a visual archive of Nepali women’s struggles that are often missing from mainstream history and public memory.

“Not just in Nepal, but all over the world, the contributions of women to any sector are not well known. That is not because women made fewer contributions, but because the pen was not in their hand. We know that history is written by those who have access to writing, and women have rarely been in that position,” says Binda Pandey, a leader of the Nepal Communist Party and a feminist activist, whose photos were among the exhibits.

Women-led political activism for equality is not a Western concept, says Diwas Raja KC, the curator of the Feminist Memory Project. “It has been deeply rooted in Nepali culture, whether it is in political movements that demanded education and property, or in labour movements demanding equal pay and maternity leave,” he says. The Feminist Memory Project was, therefore, an attempt to “broaden the definition of feminism and include many movements that contributed to women’s improved status today,” he adds.

The history of women’s protest in Nepal is long and illustrious. In fact, one of the first recorded organised political movement in Nepal was led by a woman named Yogmaya, who led many protests against the Rana regime – a dynastic autocracy that ruled Nepal for a century until 1951. Yogmaya established Nari Samiti in 1918, one of the first women’s organisation in Nepal, which lobbied against the practice of sati (widow immolation). According to popular tradition, Yogmaya and 67 of her followers committed mass suicide as protest against the Rana regime. An  article on Yogmaya published in the feminist magazine Asmita in 1994 – which called her “the first rebel of the feudal era” – was reproduced in the exhibition.

“At the time, Yogmaya did not call herself a feminist, but had definitely campaigned to improve the lives of women. Many early movements for women’s rights in Nepal were of the same nature, where the campaigners had no notion of feminism, but they worked with a feminist perspective,” says Pandey.

The exhibition also carried several photographs of the activities and documents of the Nepal Mahila Sangh, a women’s political organisation which was started in 1947, predating any other Nepali political organisation active today. The series began with a group photo of women, “who had organised to protest the Rana regime”, in austere white saris, consciously posing for a photograph. Among the earliest demands of the Nepal Mahila Sangh were voting rights, and there is a memorable picture of a suffragists rally: many women atop a truck, as it navigates the narrow streets of old Kathmandu. Other women line the aankhijhyal windows, watching the spectacle with curiosity. The Sangh asked the Rana Prime Minister Padma Shumsher for voting rights for women in the 1947 municipal election in Kathmandu. They succeeded in that endeavour, according to a Sangh document on display.

A Sangh document published soon after that outlines its history and lists some proud accomplishments, including voting rights and a protest against British government representatives “sent to strengthen the dictatorial government in Nepal.” Their demands for the future were as much theoretical as practical: “intellectual development of women” along with “economic independence.” The same document goes on to ask for women’s education, and trainings for “the positions that women occupy in professional arenas worldwide, including stenography, office secretary, clerk, telephone and wireless operator.”

The photographic collection of Sahana Pradhan, a Nepal Mahila Sangh leader who later went on to become a prominent communist leader and a minister, was an important part of this archival display. A political activist early in her youth, she was arrested in 1947 for attending a pro-democracy protest, which earned her an audience with the Prime Ninister Padma Shumsher. During the meeting, she demanded that women should be allowed to study in Durbar High School – one of the few institutions of modern secondary education in Nepal then. Shumsher founded the Padma Kanya School – Nepal’s pioneering all-girls school – the same year, and has since been credited for pioneering women’s education, erasing Pradhan’s activism. Pradhan became one of the first four women to pass the School Leaving Certificate exams the following year. The exhibition carries photos of her developing from a curious, open-eyed child to a proud young woman in a graduation gown holding a certificate, to an adult smiling with her comrade and husband, communist leader Pushpa Lal Shrestha.

Mangala Devi Singh, a founder of the Sangh and a Nepali Congress leader, also provided much of the intellectual backbone of the organisation, as some of the exhibits of the collection demonstrated. These included interviews she gave from the days of partyless Panchayat regime, when the Sangh was banned, to during the 1990 democracy movement. In one interview, she analyses women’s role in the country’s gross domestic product, arguing that much of their labour was not accounted for in the official GDP calculation. In another, taken after the restoration of multiparty democracy in 1990, she talks about the unrepresentative nature of the new cabinet under democracy.

The exhibition also showcases photographs of many women-led labour movements, especially those of the 1970s and 1980s, such as the Karjahi Movement in southwestern Nepal, when women from Tharu community, an indigenous group from the area, protested after local landlords began attacking peasants, sometimes with the help of the police, after the passage of a land-reform law in 1979. Tharu women’s participation in resisting extortion and threats from the landlords was remarkable, and the exhibition pays a tribute to them by retelling stories that barely made it to mainstream media. The festival also documented movements to end the Kamalari tradition, a system of bonded labour of Tharu women.

The photographs at the festival also reminded one of the movements for equal pay and maternity leave of the previous decades. One such protest was led by Sulochana Manandhar, better known as a poet, who in 1979 was working undercover as a labourer in the Nebico Biscuit Factory. When eight women labourers were fired from the company, Manandhar led a protest for one and a half months, which resulted in the women getting their jobs back.“Those were times before organised labour unions,” says Manandhar. “I did not think of myself as a feminist, but as someone who wanted to create a world without class, without discrimination.”

Another remarkable exhibit at the festival was the reproduction of the reading room of Parijat, a key figure in modern Nepali literature. A novelist and poet, Parijat wrote about the twin difficulties of being a woman and coming from a lower caste, much before the age of the term ‘intersectionality’.

While the first generation of Nepali feminists prior to the 1960s rarely engaged with issues of sexual agency or pursued direct confrontation with the traditional role of women in the family, that was all set to change in the 1970s. A new wave of feminists had come of age during the 1960s and 1970s, after the country’s nascent democracy was thwarted. Many of these feminists were linked to left-leaning groups, and their ideas and activism radically clashed with traditional ideas of womanhood and patriarchy.

One vehicle for their activism were magazines. Several women’s magazines were published during the 1980s and 1990s with strong feminist voices that look remarkably different from lifestyle magazines that pass as women’s magazines even today. These magazines, some of which were on display at Photo Kathmandu, often offered legal advice to women, and published articles on the issues of unequal laws, sexuality, violence against women, abortion and political representation, among others. Asmita was probably the most iconoclastic among these publications. In one cartoon the magazine ran, on the subject of women’s eligibility for ancestral property, we see brothers prod each other to find a man for their sister, who is nearing 35, the age of eligibility. Otherwise, they reason, she might soon demand “their share” of the property.

Diary entries and poems written by women in Nepal’s left movement (many of them published in the aforementioned magazines) featured in the festival as well. These show how women were trying to redefine their place in a society which was encountering a wave of new political ideas. In one, for instance, poet Pratisara Sayami protests the traditional values of tolerance foisted on women when she addresses the moon:

Are you dumb like me?
Though you have a mouth, you don’t speak…
Have you also been told to tolerate everything silently?
Has your mouth been sewed up like mine?

Always the borders of kitchen were your Laxman Rekha, not to be crossed
You gave birth to children serially, like steps on a ladder
Your husband told you this is god’s gift
And thus closed the doors to your happiness

Let’s move our feet for a revolution
There are no alleys where we should dally
Flowers will surely welcome you
But on the way, sharp thorns might make you bleed
Still, towards the building of a new world
Let us definitely dedicate our indefinite lives

“The exhibition of early feminist memorabilia is a reminder of how feminist movements have changed with the times, how we articulate our demands differently,” says Nayantara Gurung Kakshapati, organiser of the festival. “We started out with vague laments about women’s oppression, and asking for equality without defining what equality means. Over the years, through different movements, our demands became more specific, whether it is a certain percentage in reservation, or maternity leave, or equal pay, or citizenship rights, or change in rape laws towards more punishment,” she adds.

Movements protesting violence against women in Nepal, often in the shape of online activisms such as #rageagainstrape and #justiceforNirmala, have today gone public at a scale much larger than before. In some way, this parallels what Photo Kathmandu has tried to do with the photography-exhibition form itself: to bring out Nepal’s rich photographic archives, and the stories it tells about untold episodes in the country’s history. The festival was a timely reminder of how far Nepal has come in addressing questions of gender justice, but also of how many fights remain the same. Photo Kathmandu’s visual contribution to these ongoing battles will hopefully open the door to feminist movements today and tomorrow just a crack wider.

Sewa Bhattarai is a bilingual journalist working for Nepali Times, an English-language weekly from Kathmandu. Her areas of interest are gender, social justice, environment, rural Nepal, folklore and literature.