Afghan election results will determine the prospect for peace talks. 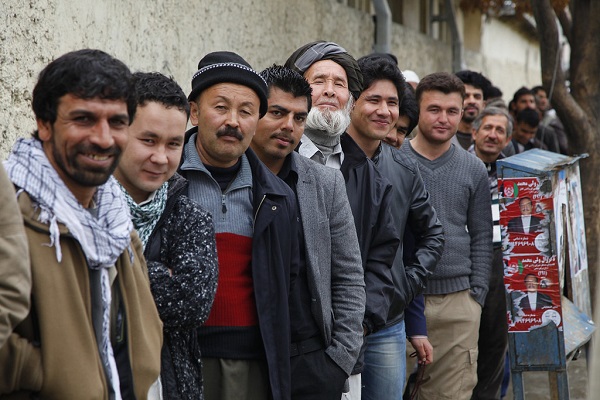 Voters line up outside a polling station in Kabul during the 2014 presidential election. Photo: un_photo / Flickr

On September 28, over two million Afghans lined up to cast their votes in the presidential elections, in which incumbent president, Ashraf Ghani, was up against more than a dozen other rivals, chief among them, the previous runner up and incumbent Chief Executive, Dr Abdullah Abdullah. Voting was marred by violence and allegations of corruption, as it has been in earlier elections. The process of counting votes has already become contentious; how politicians, the Independent Election Commission and the media handle what may be a disputed outcome, will do much to determine the future of both democracy and democratically-led peace negotiations in Afghanistan.

In the past fifteen years, elections have meant a variety of things. The first few elections were largely used by politicians to demonstrate their influence and the strength of the ethnic groups they represented. In recent years, the political elite have used disputed election results to negotiate power-sharing arrangements. In each of these cases, elections have been more than just the process of selecting political representation; they are a venue for political leaders to demonstrate the ability to mobilise followers, while undermining the reputations of their rivals, through accusations of corruption.  The current election, while ironically seeing the lowest turnout since 2004, the first elections since the Taliban were ousted, has additional significance, since it is taking place at a potentially pivotal moment in the Afghan peace process.

Up until this point, regular elections have largely been seen as one of the few positive steps for democratisation in Afghanistan. Most of those living in Afghanistan now were born into an Islamic, democratic republic. Millions have shown up to vote in each of Afghanistan’s six national elections (including presidential and general elections) since 2004, despite threats by insurgent groups. Women have participated as voters, candidates and officials while still facing many obstacles.  And while some transitions of political power have not been smooth, the vast majority of Afghans see elections as the only means of peacefully and legitimately transferring power in the country.

However, there are serious cracks in these democratic practices. Beyond the fraud and corruption of previous elections, the last presidential vote was not resolved through a transparent counting of ballots, as much as it was ultimately a political settlement between Ghani and Abdullah. While Afghan voters largely acquiesced to this as an acceptable political outcome, avoiding violence, neither side publicly accepted defeat and this set a precedent for elections and political transitions to be resolved through politics rather than democratic processes.

A democratically elected government considered legitimate by the majority of Afghan people is particularly crucial at this moment, for long term peace.  Peace talks between the US and the Taliban have excluded government officials and representatives of the Afghan people themselves. With the talks now collapsing, there maybe an opening for real progress in terms of reconciling groups which have long been at war. With the US stepping back from negotiations, there is an opportunity for a united Afghan government to step forward, as representatives of a country long tired of unending war.  However, a divided, feuding government will have a much more difficult time doing this.  And, if the Taliban perceive the government as weak and divided, they are more likely to push their advantage.

The present elections had already been repeatedly delayed, with some suggesting that negotiations with the Taliban should conclude before the vote.  In an interview leading up to the polls, former president Hamid Karzai claimed that elections threatened the prospects for peace in Afghanistan, with some of his supporters and opponents of the current government calling for an interim government. However, a similar arrangement, negotiated after the collapse of the communist government, helped trigger a civil war and the eventual rise of the Taliban, and most Afghans fear a return to such an era. It is difficult to imagine a transitional government that would actually relinquish power at the end of its agreed term. All these factors suggest that without a clear, transparent, outcome, the prospects are not good either for continued democratisation or peace.

However, in the days following the election, both leading candidates have claimed victory (even while castigating the other side for premature declarations) and the Independent Election Commission, which oversees the vote, has worryingly released confusing initial numbers on the turnout, which some see as evidence of fraud.

The Taliban, in the meantime, conducted a series of attacks on election day, as it had during previous polls, demonstrating, to many, the failure of the Afghan government to successfully hold their own elections.  (Only approximately 70 percent of polling stations were prepared to open in the days leading up to the vote and the number of those which actually opened is still not confirmed.)

There is still time for the Independent Election Commission to take firmer hold of the process and ask candidates to refrain from interference. The international community in Kabul still has significant diplomatic influence,which it can also use, pressuring candidates to accept a clear outcome.

The voters, at thousands of polling stations across the country, show Afghans’ commitment to democratic processes, but it is a fragile democracy that will be under immense pressure in the coming days.  Both Afghan politicians and the international community need to demonstrate their respect for the voters’ wishes.

Noah Coburn (@NoahSCoburn) is a political anthropologist at Bennington College, who focuses on political processes, including elections, in Afghanistan and elsewhere in Southasia. His most recent book, Under Contract: The Invisible Workers of America’s Global Wars, was published in 2018 by Stanford University Press.