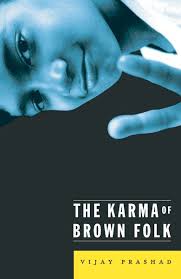 ‘The Karma of Brown Folk’ by Vijay Prashad, University of Minnesota Press, 2000.

‘The Karma of Brown Folk’

During the years of slavery in America, there was a hierarchy of blackness. ‘House niggers’, those slaves who curried favour with their white masters, were allowed to live in the plantation home and enjoyed a higher status of slavehood than their brethren who worked the fields. That house niggers were usually fairer, after generations of ‘intimacy’ with their masters, further contributed to their status and to the lessening of their blackness.

It always paid to have a bit of ‘cream in your coffee’.

In The Karma of Brown Folk (2000), Vijay Prashad explodes the myth of South Asians as a ‘model minority’, and argues convincingly that they perpetuate racial inequality in the US, precisely because of their willingness to play this role of house nigger. Preposterous, you say? Read this book and you may be convinced otherwise.

Who are South Asians held up in comparison to? Usually American Blacks, a racial minority which consistently demands affirmative action (i.e., employment equity) and social programmes, a community that continues to face a host of social issues associated with poverty and disadvantage. The unwillingness of the Republican Right to address these issues is compounded by the voices of desi success, such as Dinesh D’Souza, who attribute Black America’s backwardness to civilizational collapse rather than historic discrimination and marginalisation.

After the racism of British colonialism and that experienced as immigrants in America, the average South Asian is only too happy to be at long last praised by the white man. They would far more prefer to be associated with the winners (whites) than the losers (blacks).  Along the way, Prashad points out, the average South Asian fails to understand and appreciate the history of racism against blacks. Thus desensitised, the desi is deployed by the American Right in its war against Black America.

“South Asian Americans prefer to detach themselves from the minutiae of democracy and to attach themselves solely to the task of capital accumulation. All the while, there is a sentiment that we will be praised by white supremacy and left alone to do our work at the society’s margins.”

It is ironic that South Asians are deployed precisely because they fail to engage themselves politically or, if they do, because they engage largely with the American Right. Prashad writes: “In the United States, the bulk of the desi community seems to have moved away from active political struggles toward an accommodation with this racist polity. The bargain revolves around the sale of the desi political soul in exchange for the license to accumulate economic wealth through hard work and guile. They seem oblivious of their decline into a realm of pure commerce, one that leaves them politically powerless (disorganised and without allies). They live in America, but they are not of America.”

Prashad then proceeds to rip apart the great paragons of desi success such as Deepak Chopra, M.D. current guru to the stars or what he terms a “Sly Baba”. He blames both Yankee Hindutva and Chopra’s mushy new age remedies for a lack of effective political engagement on the part of desis and complicity in a racist system, pointing out that ” . . . the Hinduism imparted in the United States was deeply conservative, since it taught those interested to ‘desire mukti (liberation) but hug their chains’, that is, to want spiritual peace, but not social justice”.

In The Karma of Brown Folk, Prashad breaks new ground on a number of other fronts as well. He provides a thorough analysis of American Orientalism, the construction of ‘spiritual’ India by America’s circuses, early films, religious ideologues and writers of the nineteenth century. He reveals the historic relationships built between desis and blacks, from Martin Luther King and Mahatma Gandhi and W.E. Du Bois. And he critiques US immigration policy which, until recently, has selected mostly bred-for-success desi professionals who contribute to the model minority myth.

What’s missing is something prescriptive at the end. One would almost expect a guide or some basic principles for social action. The ending, a ‘workers unite’ type of a call for colour-labour solidarity offers few real examples other than the 1998 strike by the New York Taxi Workers Association and at that point the book peters out. The author provides little else in terms of direction for the would-be American desi activist.

The chapters of The Karma of Brown Folk read like a series of compelling essays, each one a fresh and incisive look at the desis of the West. It is a long overdue challenge to those ‘bought over’ and seeking self-serving compromise with the Right as ‘persons of colour’. It asks important questions about who we choose as allies and the history we choose to ignore.