The row over a cartoon featuring Dalit leader Ambedkar shows a lack of critical thinking in the Indian polity. 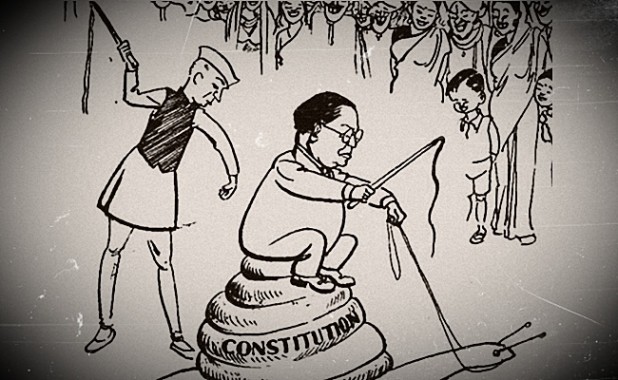 The cartoon by Shankar Pillai that caused such pandemonium in the Indian Parliament on 11 May 2012 when various Dalit and non-Dalit members demanded its omission from a Class XI textbook was originally published in 1949. It depicts Dalit leader Bhimrao Ramji Ambedkar with a whip riding a snail entitled ‘Constitution’ while from behind then-Prime Minister Jawaharlal Nehru, also with a whip, looks down at the snail. The cartoon is entitled ‘Snail’s Pace,’ referring to the slow pace of the drafting of the Indian Constitution, in which Ambedkar was involved as the chairman of the drafting committee.

Led by Ramdas Athavale of the Republican Party of India, Dalit activists read the inclusion of the cartoon in textbooks as an insult to Ambedkar. Athavale – who fought the last municipal elections in Mumbai in February in alliance with the Bharatiya Janata Party (BJP) and Shiv Sena – demanded not only the recall of the textbooks, but also the arrest of Suhas Palshikar and Yogendra Yadav, advisors for political science textbooks who in the aftermath of the protest resigned from their posts. Furthermore, Athavale even approved of the vandalism of Palshikar’s office by four activists from the Republican Panthers Party of India.

Dalit intellectual Hari Narke condemned the vandalism as an insult to Ambedkar’s vision, pointing out that ‘Ambedkar himself was a hardcore supporter of liberty of thought. It was because of his reverence for the freedom of speech and thought that he specially incorporated Article 19 in the Constitution of India, which assured citizens the right to think and express their thoughts’. Ambedkar’s grandson Prakash Ambedkar has also said that his grandfather would not have opposed the cartoon.

Dalits, however, are split on the issue, and one of the reasons is that the image can be interpreted in different ways. Some view the cartoon as showing Ambedkar in a poor light, with Nehru raising the whip at him. But this would have made sense only if Ambedkar had been portrayed as the snail: you do not whip the rider to make a horse run faster! A different reading is that Ambedkar, seated atop the snail, is in a more elevated position than Nehru, who is behind him on the ground, but both men are trying to whip the snail to move faster. Evidently the cartoonist meant to show no disrespect to Ambedkar, and reportedly the latter took no offence.

Others have objected that the cartoon is just not funny, thereby missing the entire point of the exercise. Reproducing a cartoon published over sixty years ago is not supposed to make you laugh, any more than reproducing a film poster from that period is supposed to make you go out and buy a ticket, or reproducing a newspaper clipping is supposed to give you the latest news. The point is to tell you something about the culture and debates of that period. The cartoon tells us that some people – perhaps including the cartoonist – were impatient because they thought that framing the Constitution was taking too long, and that a cartoon is a far more vivid way of conveying this than a bald assertion of the fact.

Perhaps those who are protesting against the inclusion of the cartoon in the textbook feel that the cartoon is criticising Ambedkar and telling students that he took too long to frame the Constitution. However, the rest of the text, which explains why it took a long time to discuss so many complex issues and come to a consensus in a democratic manner, does not support this interpretation. In an interview after his office was vandalised, Palshikar explained that the purpose of including the cartoon was ‘to encourage students to develop an opinion instead of getting readymade answers’. Students are presented with evidence of one opinion (that the process of Constitution-drafting was needlessly long) and evidence for another (that a great deal of time was needed to carry out the task) and are asked to come to their own conclusion.

Poisoning minds
When the National Democratic Alliance (NDA) led by the BJP was in power (1999-2004), it revised school textbooks published by the National Council of Educational and Research Training (NCERT) in accordance with the ideology of Hindutva. After the NDA was defeated in the elections of 2004, the NCERT under Krishna Kumar began working on the National Curriculum Framework, which came out in 2005. Around 300 teachers, academics and educational activists were involved in the consultations, and one of the main issues discussed was whether to go back to the pre-NDA texts or design new textbooks altogether. The decision was in favour of the latter course of action, for two main reasons: one, new research and knowledge that had emerged since those textbooks were published needed to be incorporated; and two, the educationists wanted to encourage students to engage in debates and analytical thinking rather than rote-learning, and they wanted to make the whole approach to knowledge more interesting. The new textbooks came out in 2006, and while they were far from perfect, the new pedagogical approach was widely appreciated by both students and teachers.

What is tragic about this particular attack on free expression is that this noble undertaking by the NCERT is in peril. Encouraging students to think for themselves rather than simply believing and reproducing what they are told is an absolutely crucial requirement for a democratic society, and this cannot be done unless they are presented with contradictory viewpoints and asked to come to their own conclusions.

It is a telling indictment of the Indian polity when politicians from virtually all parties, including the BJP – hardly a bastion of Dalit empowerment – descended on the textbooks like a pack of vultures, demanding the removal of all political cartoons from the textbooks. As Ronojoy Sen notes in the Times of India:

The tone was set by Harsimrat Kaur Badal of the Shiromani Akali Dal (Supreme Akali Party) who accused the textbooks of ‘poisoning young, impressionistic [sic] minds.’ This was heartily seconded by other members of the Parliament (MPs), including some from the Indian National Congress. Some of the speeches were startling for their unfounded claims; for instance the Communist Party of India (CPI) leader Gurudas Dasgupta saw a conspiracy in the textbooks to further ‘totalitarianism’. The lone exception came from a marginal party, the National Conference’s Sharifuddin Shariq, who pointed out that the MPs themselves had given cartoonists ample opportunity to caricature politicians. But aptly enough, he was shouted down by other MPs, including those from the Congress.

The charge of ‘poisoning impressionable young minds’ is not new. In 2010, the Shiva Sena accused Rohinton Mistry’s novel, Such a Long Journey, of it while burning the book’s copies and demanding that it be removed from the syllabus of Mumbai University. And even though the students and teachers pointed out that the book (like this cartoon) had been part of the syllabus for years without creating any problems, the novel was withdrawn from the syllabus against the background of threats of violence.

The fact that the authorities have been so quick to withdraw the cartoon (and the novel) from the course because it allegedly poisons young minds suggests that for the powers-that-be schools (and junior colleges) are supposed to churn out adults who are adapted to an authoritarian culture and will therefore cause no trouble for those who hold power, no matter how much they abuse it. As Sen remarks, ‘If Indian politicians think that [the novel and the cartoon are] poisoning the minds of students, we must reach the sad conclusion that … they are firm believers in rote-learning. Worse their attitude reeks of paternalism which completely underestimates the minds of today’s teenagers.’

Ambedkar knew that in order to wipe out caste oppression, education in the sense of encouraging critical thinking, speech and writing was a must. Seen from this perspective, the move to eliminate material perceived as ‘offensive’ from the NCERT textbooks is undoubtedly a betrayal of his legacy.

~ Rohini Hensman is an independent scholar, writer and activist based in India and Sri Lanka.