Skip to content
Archives > Driving across the land of pagodas

Driving across the land of pagodas 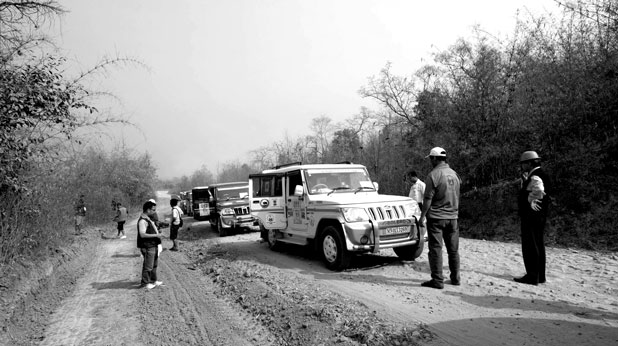 On the road in Burma. Photo : Pradip Phanjoubam

The road from Tamu, the Burma township just across the Indian border, to Kalemyo via Kalewa, could have been any Indian road in terms of construction quality and feel. This is hardly surprising, for this 160 km stretch of two-lane asphalt was built by India’s BRO (Border Road Organisation), and inaugurated in 2001. Its maintenance is also under the charge of the BRO, and occasionally, as we cut through virtually uninhabited peripheries of the Sagaing Division of the country, BRO vehicles, road construction machinery and earth movers became a familiar sight.

We bypassed Kalewa and arrived at Kalemyo, the larger and busier of the two adjacent towns for a night’s halt. It felt as though the entire town was waiting for us. Burma’s enthusiasm and hunger for change was evident in every one of the thousands of faces along the road, waving as the rally cars cruised into town. Everybody was eager to please us, almost to the point of embarrassment. From the petrol pump handlers where we queued up to refill, to the sparse staff in the few modest hotels where we were booked, everybody was apologetic that their service may not match our expectations. They were, they said, still adapting to what they see as Burma’s brave new world, hurried in after more than half a century of almost complete isolation, imposed by a tough but insecure military junta.

“Please bear with us. We are still learning,” explained the young manager of the hotel I was to stay in, and his staff went around the lobby telling each of the visitors the same as we waited for our respective rooms to be allocated. I could not help wondering that while this evident hunger for change can provide the impetus for Burma to free itself from its current circumstances and join many of its neighbours – aptly referred to as the Asian Tigers – it may also result in disappointment. Amid the current euphoria and optimism in Burma, there are worries too that these hopes could be belied by the absence of an enlightened leadership. After 60 years of dictatorship, the majority of people have remained impoverished, while the wealth of this resource-rich country has been funnelled into the hands of less than one percent of the population, those in or close to the erstwhile military regime. Many analysts still describe the Burmese government as a proxy of the country’s military.

This dichotomy between rich and poor is evident everywhere. During the rally, there were hardly any motor vehicles on most of the roads, but every now and then, expensive SUVs and sports cars would whizz past us. This coterie has the money, but there is little in the way of an entrepreneurship culture, so they end up investing their money in property. Due to the buying spree since Burma’s liberalisation, price tags on real estate in Mandalay and Yangon, as well as other major cities, have escalated dramatically. Property prices in Mandalay are now said to have surpassed those in Bangkok.

The much-touted rush of foreign investment capital into Burma is, however, of a different but equally problematic kind. Almost all are in the extractive industries, which would not generate large-scale employment or income streams for the people by and large. A recent Foreign Policy article warned of the dangers associated with overestimating the value of foreign investment in the country, saying it is unlikely to result in Burma joining the league of the Asian Tigers. The article argued that the economies of the Asian Tigers don’t look anything like Burma’s, which is driven by primary industries such as natural gas and mineral extraction, agriculture and timber. These industries made up over 80 percent of Burma’s exports last year. In comparison, the article said the Asian Tigers were mostly resource poor, and relied on export-oriented manufacturing to develop. Their foreign direct investment was mostly in manufacturing, rather than primary resources.

Our rally team set off early from Kalmeyo in anticipation of the 232 km stretch to Monywa, reputed to be little more than a dirt track. We were soon to discover how true to reality this reputation was. A great part of the road runs along the picturesque Chindwin River, before ascending a hill range, beyond which lies Monywa, where currently there is a raging controversy over copper mining by a Chinese weapons manufacturing company, Wanbao, and a local Burmese partner, Union of Myanmar Economic Holdings. The asphalt topping along most of this road had been almost completely washed away, and as this was the dry season, we drove with fog lights; visibility often dropped to less than ten metres on account of the dust cloud that the cars in front generated. One can only imagine that during the rainy season, only four wheel drives would be able to negotiate this road. It also cuts across many rivulets, over which there are only weak bridges. Heavy passenger buses as well as freight vehicles have to climb down to the river beds to traverse them. Obviously, heavy vehicle traffic would not be able to make these journeys in the monsoon season, when these rivulets are in spate. This knowledge is not new; many accounts from the now-defunct, but soon to be revised, Imphal-Mandalay bus service have illustrated this. Fortunately for the locals, it seems India will be extending the Tamu-Kalmeyo road up to Monywa, and BRO vehicles are already seen at intervals here, too.

From Monywa to Mandalay via Sagaing town is another 131 km. Here the road is black-topped and well-maintained. Rural poverty is visible all around, and the resilience with which this condition is being borne by ordinary people would have been heroic if it was not so tragic. Nonetheless, the Buddhist ethos shines through and is manifest in an all-round social discipline. Pitchers filled with potable water and placed on wooden platforms fixed at convenient heights lined the roads at regular intervals. Although it was not clear whose responsibility it is to fill them – most likely the villagers nearby – the pitchers were never empty.

That Burma is in many ways still at odds with itself also became evident, and in a dramatic way. Most of its vehicles, especially the older ones, are right-hand drives, but vehicles are also required to drive on the right hand side of the road. Apart from making judgment while driving less accurate, this also leaves passengers on public transport disembarking into the middle of the road. Last year, the Burmese government issued a decree that any future imports of motor vehicles would be left-hand drive only.

Mandalay is – unsurprisingly – a great city. It was the seat of Burma’s power until 1885 when King Thibaw, the last of the Konbaung kings, was defeated by the British, with his country annexed into the Empire. Thibaw and his queen Supalayat were exiled to Ratnagiri near Goa, where they spent the rest of their lives. We arrived at night, when the city was neon-lit and glittering. The city gravitates around the majestic Mandalay Palace, which boasts a large and picturesque moat running around its perimeter. We halted for the night at Mandalay, and were put up in a hotel overlooking the palace. In the evening there was a dinner and cultural programme to attend in another hotel, some distance from the palace. The dinner was concluded well after midnight, but when the buses were ready to transport us back to our hotel, I decided to walk back, hoping to get a better feel for the place. Although there were few cars or pedestrians around by then, I felt absolutely secure. Young people on mopeds cruised by occasionally, chatting away, probably returning from late-night dates. Some policemen on the far side of the road eyed me curiously, but dropped their gaze in civility when I looked back. Crime in the city, I later found out, is almost unheard of. Was this the effect of six decades of military discipline, or a characteristic inherent in Mandalay and its inhabitants? Whichever the answer may be, obviously nobody is the loser.

Mandalay to Naypyidaw, the brand new, ultra-modern capital of Burma, is a distance of 324 km, but is easily traversed in half a day. The road between these two cities is a newly constructed, reinforced concrete, state-of-the-art highway spanning four, and in places eight, lanes. Naypyidaw is a beautiful city of glass and steel buildings, well-planned and wide avenues, sprawling green lawns and parks, upscale shopping malls and hotels, attractive, affluent apartments and bungalows, and an administrative centre adjacent to a gilded replica of the famous Shwedagon Pagoda in Yangon. The only unusual thing about this city is that it is largely unpopulated, giving it an eerie, haunted feel. Most predict this will change, with Naypyidaw transforming into a megacity of the future – bustling with life – once people have begun occupying the apartments, and the malls and multiplexes begin to have visitors. One other thing is certain: this city will most probably remain affordable only to the richest strata of Burmese society.

After a night’s halt in Naypyidaw, our rally proceeded to Yangon, a city which wears a tired look and is reminiscent of Kolkata, with unmistakable colonial architecture lending a peculiar old-world charm to many of its noisy streets. The distance of 330 km was covered with uneventful ease. We spent three nights here, attending a formal reception held by the Indian embassy, touring the city, visiting the magnificent Swegadon Pagoda, and shopping. A touching sight at the Shwegadon is a huge photo print in one corner of the pagoda, of the bunyan tree at Bodhgaya in Bihar, where the Buddha is said to have attained enlightenment. A guide explained that many devotees in Burma are unable to afford a pilgrimage to the Bodhgaya temple, and so instead they make do here, offering their worship before this image of the holy site.

We took a different route on our return journey. Instead of taking the road back to Naypyidaw and Mandalay, our rally took us to Pyay, another ancient city; Bagan; the haunting land of a thousand pagodas; and then Monywa, Kaleymo, and Tamu, finally crossing back into India at Moreh, in Manipur. Bagan was extraordinary; an entire landscape littered with pagodas of various sizes and shapes. Some were built out of pure devotion by ordinary people, others by the affluent, in the belief this would absolve them of their sins, ensuring a dignified rebirth in the next life, as George Orwell suggests in Burmese Days.

The wonderful pagodas and temples of Burma are proof of the creativity that religiosity can inspire. Perhaps a little unsettling is that, amid all its great artistic and architectural creations, secular efforts – with the prominent exception of the Mandalay Palace – are conspicuous by their absence. Also striking is the level of preservation: many of the grandest Burmese pagodas do not betray their age, owing to continuous upgrading and renovation. These include the majestic Shwedagon. Some may frown at this, but then these are living monuments still used by devotees, and not dead ones preserved for the benefit of tourists and visitors. These are not museums but temples of worship. As with so much of modern Burma’s development, the achievements it has made and the challenges it faces, the present is part of history and has a right to contribute to it.

Pradip Phanjoubam is currently a fellow at the Indian Institute of Advanced Study, Shimla. He is also the editor of Imphal Free Press, an English-language daily published from Imphal.