Skip to content
Analysis > Sri Lanka: Back on the brink

Sri Lanka: Back on the brink 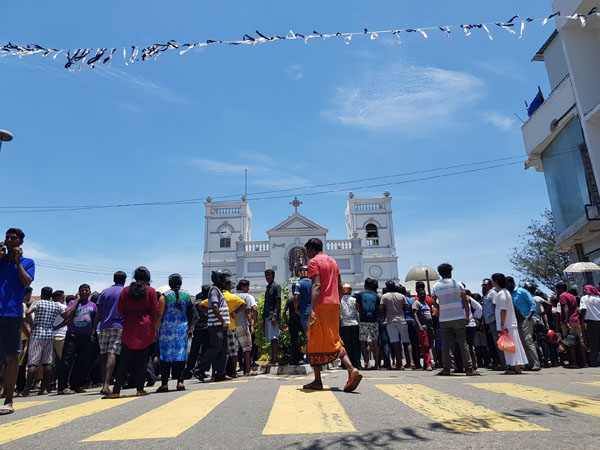 Outside St Anthony’s Church, Kochchikade, in Colombo, one of the sites of Easter Sunday attacks. Photo: Amalini De Sayrah / Groundviews

The Islamic State of Iraq and Syria (ISIS) has claimed responsibility for Sri Lanka’s Easter Sunday massacre. The claim, made more than 48 hours after the coordinated series of attacks targeting churches and downtown hotels on April 21 is yet to be independently verified, but appears to have been accepted by the authorities. The government has also claimed that the local partner of this murderous enterprise was a little-known organisation called the National Thowfeeth Jamath (NTJ), or a breakaway from it.

What is beyond doubt is that every single suicide bomber – reportedly eight men and one woman – were Lankan Muslims, many of them from middle and upper-middle-class families, successful businessmen and professionals, even parents approaching middle age, rather than hot-headed young men. They had everything to live for, and chose to die, taking with them more than 250 innocent lives. (Initial figures of more than 350 deaths have been revised by the government)

That choice is in stark contrast to the conduct of the community the bombers belonged to. Lankan Muslims have not resorted to politically motivated violence, not even when they were attacked. And they have been attacked repeatedly, by Sinhala-Buddhist mobs and by the Liberation Tigers of Tamil Eelum (LTTE). The last such incident was the anti-Muslim riot of Digana, Kandy, in March 2018. But the community never employed retaliatory violence. After each attack, they’d pick themselves up, and return to the work of living. They received little commendation, and even less justice; on the contrary, every single crime of every single Islamic terrorist or extremist anywhere in the world was held against them as part of the rise of Islamophobia in Sri Lanka, as elsewhere. Though they themselves had not opted for political violence, Lankan Muslims were forced to bear the burden for others’ crimes.

The eschewing of retaliatory violence was something Lankan Muslims had in common with Lankan Christians, the community the planners of the Easter Sunday massacre chose as their primary victims. Like Muslims, the Christians of Sri Lanka have been subjected to violent attacks repeatedly. Like Muslims they never fought back. Like Muslims they got little or no justice or protection from whatever the government in office.

This shared experience created a sense of solidarity between the two communities in the past. When one community was attacked, the other offered sympathy and support. The last such incident happened days before the Easter Sunday massacre. On Palm Sunday, Aadara Sevena (Shelter of love), a community centre run by the Methodist church in Anuradhapura was attacked by a mob. The local police, instead of protecting the victims, refused to intervene to stop the attack, and only provided them a safe escort out of the church when ordered to do so by senior officials in Colombo.

In protest against the mob violence and official indifference, the Methodist Church held a silent vigil in Colombo on Good Friday, 19 April. A picture of the vigil shows several Muslim clerics standing shoulder to shoulder with Christian priests. That picture, taken just a week ago, seems like a memento from a long-lost world.

Suicide bombing is not new to Sri Lanka. The LTTE excelled at it. The Easter Sunday massacre marks a turning point because it is the first religion-inspired suicide bombing in Sri Lanka. And in a cruel irony, it involved the country’s two most politically peaceful communities, thereby creating a faultline where none existed.

Sri Lanka’s Easter Sunday massacre is unique because it happened in a politico-historical vacuum. Previously, when Al Qaida, the ISIS or some other offshoot have targeted a religious community, they have usually done so in places with pre-existing religious fissures. They have exploited existing divides – and in doing so exacerbated the divisions.

In recent years the most visible religious fissures in Sri Lanka have been those between Buddhists and Muslims, and, to a much lesser extent between Hindus and Muslims. Not Muslims and Christians.

Like in many parts of the world, Lankan Muslims too have been caught in the winds of radicalisation. Wahabism and Salafism have made serious inroads into the community, mainly due to the influence of Saudi Arabia and other Gulf states. But this radicalisation is pivoted more towards social issues than political issues. It is more interested in abayas than autonomy. Consequently, the radicals have been more concerned about Muslims progressives and moderates than Buddhists, Hindus or Christians. Bombing high-end hotels falls within the resultant rubric of ultra-conservatism; not so the exclusive targetting of churches.

Suicide bombers are probably the hardest weapon to create. It takes time and effort, and a context, to hone a human being, and to bring him or her to the point of homicidal-suicide. In Sri Lanka, the ISIS seems to have succeeded in motivating a large group of potential suicide-killers to target a group they have no reason to hate. That is a remarkable achievement, and a truly terrifying one.

Professor Bruce Hoffman of Georgetown University points out, “Historically, even a single suicide bombing requires a logistical ‘tail’ involving many people, including recruiters to radicalize and maintain the resolve of bomber-martyrs, skilled bomb-makers and operatives to surveil targets. This is a formidable undertaking generally only accomplished by people with considerable expertise and an organizational network.” How did the organisation manage such a feat? Was it done mostly long distance, using modern communication technology? Or did a local group, inspired by ISIS words and deeds, plan and execute this operation? Both possibilities are chilling and bode ill not only for Sri Lanka, but also for the region and perhaps beyond.

Newton Gunasinghe has pointed out that during the Eelam War, class contradictions were overdetermined by ethnic conflict. Even the traditional religious divides became submerged in ethnic identities. Sinhalese, irrespective of their religious differences, made common cause, as did Tamils. Ethnic overdetermination decided where a Lankan stood, both politically and personally.

Post-war, a new danger emerged – ethnic overdetermination being replaced by religious overdetermination. The danger emerged not spontaneously, but as a result of a concerted effort by the government of President Mahinda Rajapaksa to demonise Lankan Muslims. The meteoric rise of the ultra-nationalist Sinhala-Buddhist Bodu Bala Sena (BBS) happened within this context. The incendiary politics of the BBS and other hardline Sinhala-Buddhist organisations led to a series of attacks on Muslim targets the largest of which was the anti-Muslim violence in Aluthgama, in southern Sri Lanka in 2014.

The Sirisena-Wickremesinghe government came into office promising to remedy this situation. Though the government did not work proactively to exacerbate religious tensions (as its predecessor did), it did nothing much to promote reconciliation or to create a climate of moderation. Instead of protecting and promoting moderates and progressives of all religions, the government adopted a laissez-faire attitude towards religious extremism. By refusing to take a stand, it provided tacit encouragement to extremism. It looked the other way as extremists encroached on religious spaces, claiming more and more ground for their intolerant brand of faith, and took little action when extremists targetted communities on the basis of religion. The government abandoned Muslim moderates just as it let down Buddhist moderates. Today the entire country is being forced to pay the price of that cowardice.

It is being argued that the ISIS chose Sri Lanka because the country is a soft target. Did the ISIS choose to attack churches specifically because they are the soft target within a soft target? After all, attacks on churches have continued, even after the advent of the Sirisena-Wickremesinghe administration. 40 such incidents were reported in 2019 alone.

Much has been written about how the Lankan security establishment ignored multiple warnings about the impending attacks. The blasé attitude of the intelligence agencies is being blamed on the infighting between the president and the prime minister. That certainly was a cause, but not the only one. Had the security establishment received intelligence about suicide killers planning to target Buddhist temples or government installations, would they have been equally unconcerned? Did the police in general and the National Intelligence Agency in particular, respond  inadequately and with such criminal lethargy, to repeated warnings because the targets mentioned were churches?

The Easter Sunday massacre has taken place less than a month before the tenth anniversary of the Sri Lankan state’s victory over the LTTE. If the aftermath of the bombings is mishandled, Sri Lanka might find itself in a new conflict. If constant vigilance is not maintained, an outbreak of mob violence targeting Muslims is more than possible. The bombers have implanted an alien contradiction on Lankan soil. It will take the concerted efforts of everyone to prevent that contradiction from turning into a new religious conflict.

So far the government has acted sensibly to prevent an outbreak of retaliatory violence. It has been aided by the dignified and measured response of the Catholic Church. The Muslim community too is doing its utmost to help apprehend all those involved in the bombings. Still, the task of keeping societal peace is going to be a hard one, not least due to ignorance and prejudice. Two recent incidents illustrate this danger. A highly-regarded Sri Lankan journalist, the BBC correspondent in Colombo, has faced Islamophobic attacks online because the media organisation did an interview with someone from a UK-based Tamil nationalist media organisation. In the other incident, the police issued a public notice with names and pictures of terror-suspects. One of the pictures was not of the woman named but of a student, an American national, a muslim woman of Sri Lankan origin. The police apologised after the student protested. If the police cannot tell the difference between one woman in a hijab and another woman in a hijab, how would they manage the far more complex tasks of identifying perpetrators of violence from conservative Muslims, Sunnis from Shias from Ahmadiyas? The two incidents indicate that prejudices that might help push the country in the direction of a religious conflict.

The connection between anti-Muslim violence and the resurgence of Islamic extremism needs to be accepted. When you attack ordinary Muslims, you prove that their traditional leaders and their peaceful politics are incapable of ensuring their safety. This is what gives extremists a head start. And that is why containing Sinhala-Buddhist extremism is more important than ever today.

After the carnage of Easter Sunday, hope is rare but not dead. A glimmer of it could be seen in the funeral of a 13-year-old victim of the bombing. The girl died while attending the Easter mass with her mother. Yet her funeral was held at Negombo Grand Mosque because her father was Muslim. Groundviews reported that “a small group of Christian women are also present at the mosque; they pray and recite stanzas of the rosary over the body before it is borne away for burial.”

In the last rites of that unnamed young girl, a sense of our common humanity overcame the bloody divisions created by the massacre. If Sri Lanka can cleave to that humanity, the future might not be dead.

Tisaranee Gunasekara on the history of Islamophobia in Sri Lanka

Tharuka Dissanaike on the politics of food in Sri Lanka

Tisaranee Gunasekara is a political commentator based in Colombo.