As Afghanistan’s election result hangs in the balance, a look at the electoral systems in the region. 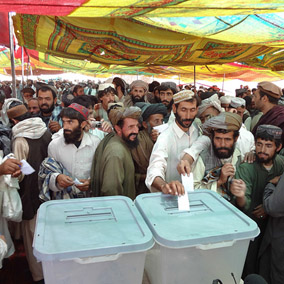 All the nation states of Southasia make claims of being democracies, but this description merely affirms the fact that all nine of them hold elections of some kind. The practice of democracy itself varies widely, however, as it is determined, in the first instance, by the individual electoral systems. The electoral laws followed by each country lead to wildly different forms of representational politics. The rubric of ‘democracy’ often disguises how different they may be as the bustle of politics and the noise of politicians diverts attention away from the processes by which they come to power. In the absence of further information – the electoral procedures and the nature of the legislative (or executive) structures they create – that description is not just incomplete; it is misleading.

As Afghanistan struggles to define its electoral mandate for the country’s next President, Himal Southasian presents a quick study of Southasian elections in an effort to draw attention to the wide range of practices in the region. The front-runner of the first round of polling, Abdullah Abdullah, who was far behind Ashraf Ghani in preliminary results, has rejected the UN-supervised audit of elections, adding that “he was and is the winner of the election based upon clean votes.” This brings to mind the 2013 Maldivian presidential election that was considered to have been stolen from under the nose of former President Nasheed.

The absolute majority achieved by Bharatiya Janata Party in the Indian Parliament disguises the fact that the party got only 31 percent of the popular vote in the recent elections demonstrating that the number of parliamentary seats does not always reflect the vote share of the parties. India continues to follow the first-past-the-post (FPTP) system that is increasingly seen as being less democratic than alternatives like proportional representation (PR) or mixed proportional representation that Nepal, for example, adopted for its Constituent Assembly. Yet the limitations of this system are seen clearly in the case of Sri Lanka, where a Parliament elected through mixed proportional system is constricted by the authoritarian powers of a directly elected President.

In Bangladesh and Pakistan, the state is unable to convince many of the validity of its elections. Bhutan has received accolades for moving to electoral democracy, but still curtails adequate representation by limiting the number of parties in the contest through a complex mechanism.

An informed understanding of Southasian electoral systems is essential to gauge the quality of our democracies, their successes and failures in representing those that they claim to. If you have more information or analysis to offer, do write to us at editorial@himalmag.com as we continue to build on this initial compilation.

Afghanistan
Afghanistan has a bicameral National Assembly (Jirga) consisting of the House of Elders (Meshrano Jirga) and the House of People (Wolesi Jirga). The lower house Wolesi Jirga seats 249 members elected, through the single non-transferable vote (SNTV) system combined with a multi-seat single constituency, a peculiar amalgamation of two different systems that prevents political consolidation of their mandate by parties. The highest polling candidates (given by the number of seats in the constituency) are elected for a five-year term. These members come from 35 multi-member constituencies, including a Kuchi (nomad) constituency which elects 10 members through a Single National Constituency. Also, the house reserves 64 seats for women.

It is a perplexing system followed only in Vanuatu, the Pitcairn Islands and Jordan for electing the members of lower house, and seems to have been designed with a view to enhance the Presidency and ensure political fragmentation of the Parliament. As it is individuals and not parties that are competing in the elections, it ultimately results in a fractious house that encourages further consolidation of presidential power.

Afghanistan also elects its President through a popular election. The President is elected after receiving more than 50 percent of votes cast by voters through direct voting. If no candidate receives more than 50 percent of the votes in the first round, the two candidates with the highest number of votes contest for the second round of voting. Below are the results of the first round of 2014 elections.

Since no candidates secured the necessary 50 percent of votes, there was a second round of elections held on 14 June. However, due to allegations of widespread vote fraud, the ballots were audited UN supervision. The audit was completed on 5 September, but Abdullah Abdullah has already dismissed its results.

Bangladesh
Bangladesh has a unicameral Parliament known as the House of the Nation seating 350 members. Of these, 300 members are directly elected from single-member constituencies through the FPTP system. The remaining 50 seats are reserved for women who are elected by the member of the house. This is done on the basis of proportional representation (PR) through single transferable vote (STV) in which the voter ranks candidates preferentially, and votes are reallocated from ballots whose first rankings are eliminated, shifting to the next-ranked candidates on those ballots.

Below are the results from the parliamentary elections of January 2014.

Bhutan
Bhutan has a bicameral Parliament (Chi Tshong) consisting of Druk Gyalpo (King of Bhutan), the National Council (Gyelyong Tshogde) and the National Assembly (Gyelyong Tshogdu). The lower house Gyelyong Tshogdu directly elects 55 members from territorial constituencies that are allocated seats in proportion to their population. Bhutan follows the FPTP system of elections that occur in two rounds. All potential parties contest the first round, and the two political parties with the greatest number of votes get to contest the second round. Also, these parties must have 47 candidates ready for an election – one in each constituency – which makes it extremely difficult for political formations to be built. In effect, this allows the lower house to accomodate only two parties.

The upper house seats a mixture of 25 elected and nominated members, one elected member from each of the 20 districts (dzongkhags) and five members nominated by the King. Candidates running for it must not be affiliated with political parties. All candidates in this election run as independents competing in Bhutan’s twenty districts. Six of these members are women.

Below are the results of the May-June 2013 lower house elections.

Burma
Burma has a bicameral People’s Assembly (Pyidaungsu Hluttaw) consisting of the House of Nationalities (Amyotha Hluttaw) and the House of Representatives (Pyithu Hluttaw). The lower house, Pyithu Hluttaw seats 440 members, 330 of whom are elected through FPTP in single-member constituencies to serve five-year terms, and 110 of whom are appointed by the military to serve four-year terms.

The upper house consists of 224 members, 168 of whom are elected through absolute majority in single-member constituencies, and 56 of whom are appointed by the military.

Below are the results for the 2010 elections for the House of Representatives.

India
India has a bicameral Parliament of the Union (Sansad) consisting the House of People (Lok Sabha) and the Council of States (Rajya Sabha). The lower house Lok Sabha seats 545 members, 543 of whom are elected through FPTP in single-member constituencies to serve five-year terms, and two of whom are appointed by the President.

Below are the results from the 2014 Lok Sabha elections. These results clearly show the limitations of a FPTP system, especially in a country with such a large and diverse electoral base. Much has been made of the absolute majority of the BJP in the elections. This, despite the fact that almost 70 percent of the popular vote went to parties other than the BJP.

The Maldives
The Maldives has a unicameral People’s Council (Majlis) consisting of 85 members who are elected to serve five-year terms. Maldives follows the FPTP system of elections and members are elected from single-member constituencies.

Below are the results from the 2014 parliamentary elections.

The Maldives elects its President by absolute majority vote through a two-round system to serve a five-year term. Below are the results from the two rounds of presidential elections in 2013. The results also reflect the tenuous nature of popular mandate in Southasian democracies. In the first round of elections that was domestically and internationally lauded for its fairness and transparency, Mohamed Nasheed won a clear majority. He fell short of getting 50 percent of the votes required for an all out win. However, the second round of elections saw a consolidation of votes around Abdulla Yameen, who managed to increase his vote share by over 20 percent and was declared the new President.

Nepal
Nepal has a unicameral Constituent Assembly (Sambidhan Sabha) that consists of 601 members, 240 of whom are elected through a direct, constituency-based FPTP contests, and 335 are elected through party list-based PR system. The remaining 26 members are nominated by the interim cabinet on a consensual basis. The Constituent Assembly (CA) has provisions in which women must make up at least half of the PR list. Overall, 33 percent of all the candidate for the CA must be women. Other PR quotas include 31.2 percent for Madhesis, 37.8 percent for the Janajatis (indigenous groups), 13 percent for Dalits, 4 percent for inhabitants of underdeveloped regions and 30.2 percent for others not mentioned elsewhere in the list.

Below are the results from the CA elections held in November 2013.

Below are the results of the May 2013 parliamentary elections.

Sri Lanka
Sri Lanka has a unicameral Parliament consisting of 225 members, 196 of whom are elected from 22 multi-member constituencies, and 29 of whom are elected from one nationwide constituency. It consists of 140 Constituency Members, 70 District Members and 15 National List Members of Parliament elected for a six-year term. Sri Lanka follows an open list PR system in which each voter may cast three preference votes in a multi-member constituency. In this two-round contingent vote system, ballots whose first rankings are eliminated are redistributed to the next-ranked candidates if no candidate wins a majority in the first round of counting.

Below are the results from the April 2010 parliamentary elections.