Skip to content
Cover > “Ending the rule of Punjab, by Punjab and for Punjab” An interview with Sardar Ataullah Khan Mengal

“Ending the rule of Punjab, by Punjab and for Punjab” An interview with Sardar Ataullah Khan Mengal 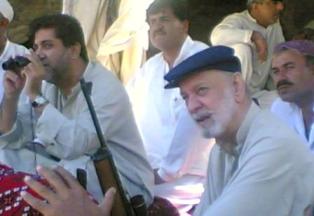 One of the most prominent leaders of the Baloch struggle, Sardar Ataullah Khan Mengal, head of the Balochistan National Party, served as the first chief minister of Balochistan from May 1972 to February 1973, at which point he was ousted by the government of Zulfikar Ali Bhutto. Although he visited his homeland on and off during self-imposed exile in the UK, Ataullah Mengal, now 78, finally returned to Balochistan about six years ago. Himal Southasian talked with Mengal by phone while he was at his home in Wadh, in Khuzdar District of Balochistan. (The call was rudely cut off several times, notably at points when Mengal was particularly critical of the federal government.)

Please pinpoint for us why the Baloch people feel discriminated against by the federal government.
How many tragedies do I have to count? The seeds of discontent lie in the fact that Balochistan, also called Kalat, was hesitant to accede to Pakistan right from the beginning. Unlike the other provinces, which had two choices before them – to join either India or Pakistan – we had a third: to remain independent. Balochistan, which had never been ‘conquered’ but had entered into a treaty with the British, opted for independence. Even though Mohammed Ali Jinnah had been an advocate for the Khan of Kalat, he chose to invade the territory, and coerced Balochistan to accede to Pakistan. Since then, every Baloch born is regarded as a ‘traitor’ in Pakistan. All of us are suspect. Conversely, the Pakistan Army in Balochistan is viewed as an occupying army, butchering the local people. This mutual distrust has given rise to eruptions every now and again, since 1972.

Meanwhile, our resources are being exploited, with no benefit to us. Employment-wise, all positions in Balochistan – from officers to sepoys – in the Secretariat, the police and the Frontier Corps, are filled up by outsiders. The local Baloch people are nowhere to be seen.

What are the practical ways in which the vast resources of Balochistan can best be utilised for the benefit of the Baloch people? What model of development do you envisage, and what inter-relationship with Islamabad?
We don’t want favours. We demand that the resources of a province belong to that province. Islamabad has no right to stampede the people. As things stand, all revenue flows from the provinces to the federal government; and in the process, Balochistan is being robbed of its assets. This is because once the federal government has collected revenue, it re-distributes it in accordance with the population size. So, since we have a small population, we get just 3.7 percent of budget outlay. This, when we contribute billions of rupees in gas alone! We cannot visualise any workable relationship with a regime that views Balochistan as a receptacle of resources to be exploited.

Do you see rivalries between the various Baloch tribes as posing a serious obstacle to a unified Baloch resistance?
Tribal rivalries are not coming in the way of a united struggle. This is nothing but false propaganda to downplay the resistance. Even in other provinces – be it Sindh or Punjab – there are different tribes and clans, each with their own competing loyalties. Tribalism exists, of course, but the differences between tribes in Balochistan are blown out of proportion. The lack of unity is more due to not being organised at the national level. The struggle is widespread, however, and is gathering momentum.

Do you still stand by your earlier demand for an independent Balochistan consisting of the Baloch-inhabited areas of Pakistan and Iran?
Yes, absolutely. I stand by the demand for complete independence of the Baloch people. However, we have enough to handle in the resistance to the Pakistan Army – we don’t want to ask for unification with Baloch-inhabited territories in Iran, and risk the wrath of the Iranian security forces!

Do you see armed resistance as a realistic route to the goal of autonomy or independence?
As the weaker party, we have no option other than armed struggle. It is a matter of survival. And capability is honed when it is a matter of sheer survival. It becomes a question of do or die. The leadership is now in the hands of youngsters, and they are evolving a collective leadership.

Do you feel that your long exile in the UK has affected your leadership of the Baloch struggle? What made you come back to Balochistan?
It was never smooth sailing under Bhutto’s regime, and then the military rule of Zia didn’t make things better. Myself and [Khair Buksh] Marri feared for our lives, and thought we would be more useful alive than dead, so we left the country. But I was never permanently away – I kept coming and going. We have a saying, “You better put up the fight for your land with your feet on that land.” So I thought it was time to come home, and carry on the struggle from here.

How do you respond to the allegation by Islamabad that the Baloch resistance is being supported by “outsiders”, notably India, Afghanistan and Iran?
This is utter nonsense! There is no truth at all in the allegation. In fact, were it true, the picture would be quite different. There is no geographical contiguity with India, so how is it is possible for India to support our struggle? And while India might have her own grudges against Pakistan, especially over Kashmir, what will India gain from the liberation of Balochistan? As for Afghanistan, it is not interested in the liberation of the Baloch people. Iran, for its part, has never been friendly to our cause, and has even occupied a part of Balochistan. Right from the time of Alexander, Iran has been hostile, and history doesn’t support the possibility of Iranian backing to our struggle. The Gulf states are too worried about their own security to intervene in any movement for self-determination. Moreover, they will never do anything without the consent of the US and UK, which are friendly to Musharraf’s regime.

Does the current lack of democracy in Pakistan act as a roadblock to the Baloch people achieving their aspirations within Pakistan?
It is true that democracy in Pakistan has not been allowed to function. Democracy here is defined as ‘Rule of Punjab, by Punjab and for Punjab’. We stand nowhere. Under the military regime, we are ruled with an iron heel. And during democracy, it is more of the same, but sugar-coated. There is no substantive difference.

Is your goal independence or provincial autonomy?
Provincial autonomy is a closed chapter. Provincial status will always mean being subject to domination by Punjab, which I see as synonymous with ‘Pakistan’. We define independence as the right to do whatever we see fit in the interests of our people. Our goal is a full, sovereign country that Punjab/Pakistan will have no power to interfere with. (Call gets cut off.)

The anatomy of Urdu

How the language of state-making in Pakistan contributes to the erasure of regional languages.

Southasiasphere podcast episode 06: Updates and analysis from around the region.