Skip to content
Excerpt > Politics and the Hindi press 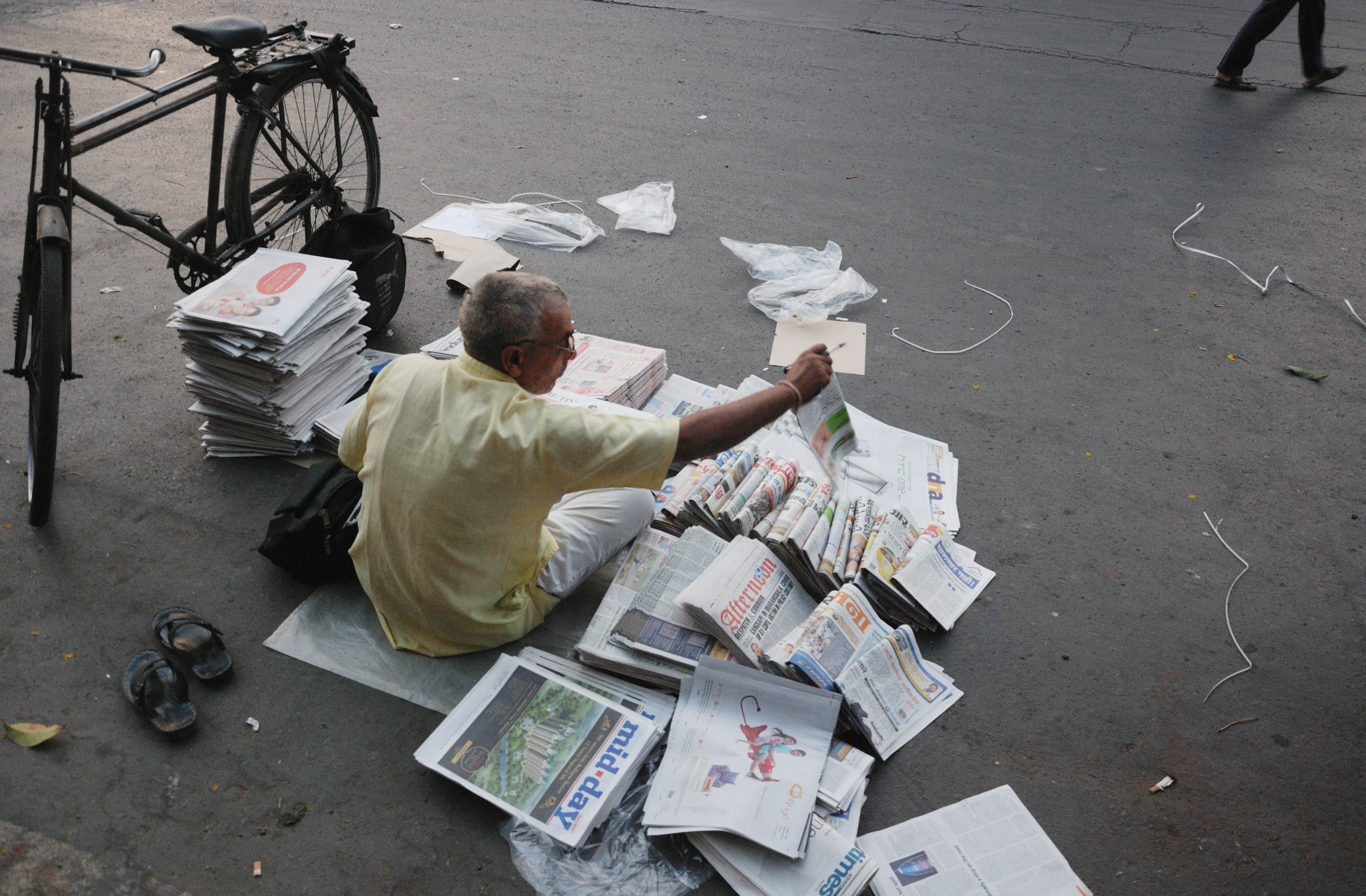 In the early 1970s, both editorials and their avid new readers experienced a unique roadblock in the expansion and mutation of the news business. The government, freshly bathed in the glory of the Bangladesh War and the dismembering of Pakistan, decided to add an additional tax of 15 percent on imported newsprint. According to an editorial written by the then editor of Nai Dunia of Indore, the pleadings of various newspaper barons and editors to reduce paper costs to enable them to sell their papers to literate but poor readers fell on deaf ears. It was felt that in the name of the poor, the rich owners and editors wanted to get concessions that would increase their own profit margins. The then finance minister, R. Venkataraman, said that he was a reader of the Chennai-based, popular English daily The Hindu, the Mumbai-based The Times of India and the Delhi-based Hindustan Times. And he saw that all the papers carried a lot of advertising that reduced the space for news considerably, yet were still selling a 16–28 pager at a cost of 60–65 paise. They could certainly afford to pay the extra newsprint cost.

The question arose: What about the vernacular dailies that were read by the poor but had only 6–10 pages with little to no private advertising? No one asked this eminently sensible question. But other questions were posed, nevertheless: Can the government ration newsprint? Or decide the number of pages and/or the correct proportion of advertisements to news in an independent newspaper? If the newspapers are able to raise sufficient advertising from the market to sell their papers for free and still make a profit, will the government allow them to do so?

Soon, in 1972, the government came out with a newsprint policy that mandated that no paper should carry more than 10 pages, nor should newspapers be allowed to play with the number of pages for their outstation editions to beef up the main edition. Bennett, Colman and Company (also known as the Times Group) took the matter to the Supreme Court, which was already somewhat uneasy with the increasing assertion of power by the Central government over the judiciary. It rejected this policy.

The world of Hindi print after 1977

After 1977, two factors changed newspapers and markets. The first was the swift rise of various Hindi-language periodicals edited by well-known Hindi poets and fiction writers. In Mumbai, Dharamvir Bharati created a new kind of weekly in Hindi with his Dharmyug, a Bennett, Colman and Company weekly that was aimed at the reading requirements of the typical Hindi-reading, middle-class family, not only in Delhi or Mumbai but also in various small towns and subdivisions across the Hindi belt. Dharmyug presented a mélange of essays about societal changes, the arts, major political happenings, with serialised fiction and poetry and literary criticism by eminent Hindi writers, along with cartoon strips and a page for children. Other major popular Hindi magazines with a similar mix were Saptahik Hindustan (from the Hindustan Times house) and Dinman. The latter was a weekly news magazine edited by Sachidanand Hiranand Vatsyayana, a well-known Hindi writer who trained his posse of writers to venture into Hindi reportage and serious and informed political analysis. These magazines created professional infrastructures for Hindi within publishing houses and refined the tasks of reporting, editing and publishing stories from the vast Hindi heartland. These also revealed an India that lay beyond big cities and party headquarters. They were less well-produced than English weeklies like the Illustrated Weekly of India, but it was as though Hindi-speaking India had at last learnt to speak for itself. A decade later, major English weeklies also brought out Hindi weeklies. Thus, the Hindi India Today, Ravivar (from the Ananda Bazar Patrika Group of Kolkata), and, last but not least, Hindi Outlook and Tehelka.

The politically volatile 1980s may not have improved revenues substantially, but the years did bring Hindi media practitioners personally and collectively closer to various dominant political ideologies and regional leaders in the Hindi belt.

The second was after 1977, when India experimented with non-Congress governments. This new phase in politics was noticeable for its new crop of strong regional leaders from rural backgrounds, more at home with the vernaculars than English. This fact immediately created greater demand and widened the scope for vernacular newspapers to do in-depth political reporting, quoting leaders verbatim. Hindi newspapers and news magazines, exactly like their Tamil, Telugu, Kannada and Bangla counterparts, had already set out a fairly respectable arena for public discourse in Indian languages. And this space now included the humblest readers in remote small towns and villages, where the expansion of the school system was raising literacy rates steadily.

As the idea of inviolable freedom of speech once again became central and the middle class expanded some more, Brahminical Hindi, full of Sanskrit words and a certain pompous style of writing, began to give way to a more colloquial Hindi that happily accommodated Urdu, English, and the various north Indian variants of the official Khadi Boli. Editors and desks now realised the wisdom of Bharatendu, who had pointed out a century earlier that there could be no one-size-fits-all Hindi; that the north, from Punjab to Bihar, spoke in over a dozen variants of Hindi, liberally laced with local bolis (dialects) like Awadhi, Braj, Bhakha, Maithili and Bhojpuri, flecked with English, Persian and Portuguese words.

Hindi rises as a clearing house for vernacular writing in India

An interesting feature of this period was that Hindi became a sort of clearing house for good writing in various Indian languages: Bangla, Tamil, Marathi, Punjabi, Malayalam, and so on. Three of the most popular Hindi magazines – Dinman, Dharmyug and Saptahik Hindustan – introduced countless small-town readers to the writings of Ismat Chughtai, S. L. Bhyrappa, U. R. Ananthamurthy, Badal Sarkar, Vijay Tendulkar, and many others. All these magazines, edited by eminent Hindi writers – Agyeya, Shrikant Verma, Dharamvir Bharati and Manohar Shyam Joshi – were cross-subsidised for decades by the revenues incurred from the house English and Hindi dailies. With the closure of magazines, this very valuable space fast atrophied.

By the mid-1980s, the steady rise of an ambitious, young, Hindi-speaking middle class in the vast Hindi belt had firmly debunked the myth that Hindi readers were too poor to afford vernacular-language dailies and periodicals.

In 1978, Rajendra Mathur wrote despairingly in an editorial how the daily circulation of any Hindi paper was yet to touch the magic figure of a million. This, despite the fact that the total copies sold by the 4,196 Hindi newspapers had touched 9.7 million, and had left English newspapers (a total of 15,800) behind, with only nine million copies being sold in toto. Still, by the end of the decade, there was unmistakable growth, both in the numbers and sales figures of Hindi print media. A report by the registrar of newspapers that was placed before the Parliament in 1979 recorded that in 1978 alone, Hindi papers had recorded a growth of 11.8 percent. By now, Hindi dailies numbered 318. It also highlighted an interesting trend in the ownership of major dailies, including in Hindi. Twenty-five major units, that by now owned almost 17 percent of the total circulation of Indian dailies, were closely related to big businesses other than publishing and reflected common economic and political interests and opinions.

The politically volatile 1980s may not have improved revenues substantially, but the years did bring Hindi media practitioners personally and collectively closer to various dominant political ideologies and regional leaders in the Hindi belt. Various major politicians heading non-Congress parties: Ram Manohar Lohia, Jayaprakash Narayan, Janeshwar Mishra, Madhu Limaye, George Fernandes, etc., were also votaries of Indian languages. The Hindi journalists, editors and media barons were no longer seen by them as adversaries or messengers for political leaders from the ruling Congress, but as the sort of communicators they needed to reach out to the masses. Many journalists and editors became close confidants of political leaders and carried out socio-political depth soundings for them from time to time. Several were even nominated to the Upper House of Parliament. An example of this was Shrikant Verma, an erstwhile senior editor with the Times Group’s Hindi news weekly, Dinman, who rose to be Indira Gandhi’s media advisor and was nominated to the Rajya Sabha. His colleagues, like Sarveshwar Dayal Saxena and Raghuvir Sahay, became ardent supporters of other eminent politicians, like socialist leader Lohia, a known baiter of Indira Gandhi, Mishra, and among the Congressmen, V. P. Singh, Janardan Dwivedi, Sudhakar Dwivedi, Arjun Singh and Shyama Charan Shukla.

Already in 1978, the first National Readership Survey (NRS) had reported that the vernacular papers, particularly Hindi, had come to command a vast readership that was several times the readership of their English counterparts.

Rajiv Gandhi’s sudden arrival coincided with the period when a vast number of neo-literate readers/voters in the small-town and rural Hindi heartland became upwardly mobile. With Rajiv talking animatedly of bringing in computers and opening up the markets to investors, aspirations were rising. The richer farmers were now keen to send their sons to larger towns to enter the newly opened institutes of higher education and technology or appear for the civil-services entrance exams. The younger readers from villages and smaller towns were looking around for vernacular papers and periodicals that would help expand their mental horizons and so to crack the admission exams. They were willing to spend good money to buy their periodicals, and tea shops, coffee houses and college debating were becoming active hubs for young minds, where people shared their newspapers and periodicals and hotly debated various political and social issues long into the night.

In the early 1980s, among the 28 highest-selling Indian dailies, four were in Hindi: Navbharat Times (Delhi), Hindustan (Delhi), Punjab Kesari (Jalandhar) and Nai Dunia (Indore). By the mid-1980s, the steady rise of an ambitious, young, Hindi-speaking middle class in the vast Hindi belt had firmly debunked the myth that Hindi readers were too poor to afford vernacular-language dailies and periodicals. Bihar and Uttar Pradesh, two of the poorest states in India’s Hindi belt, emerged as the biggest buyers of Hindi print. A sudden 40 percent jump was recorded in the circulation of Hindi dailies. Already in 1978, the first National Readership Survey (NRS) had reported that the vernacular papers, particularly Hindi, had come to command a vast readership that was several times the readership of their English counterparts. The gap between English and Hindi dailies kept widening. And more Hindi readers began buying their own copies instead of sharing a copy with many others.

Excerpted with permission, from The Journey of Hindi Language Journalism in India: From Raj to Swaraj and Beyond by Mrinal Pande. Orient BlackSwan, August 2022.

Mrinal Pande is a veteran journalist, television personality, and author.