The Malayali link to Sinhala culture has a rich past even if it does not have much of a present. 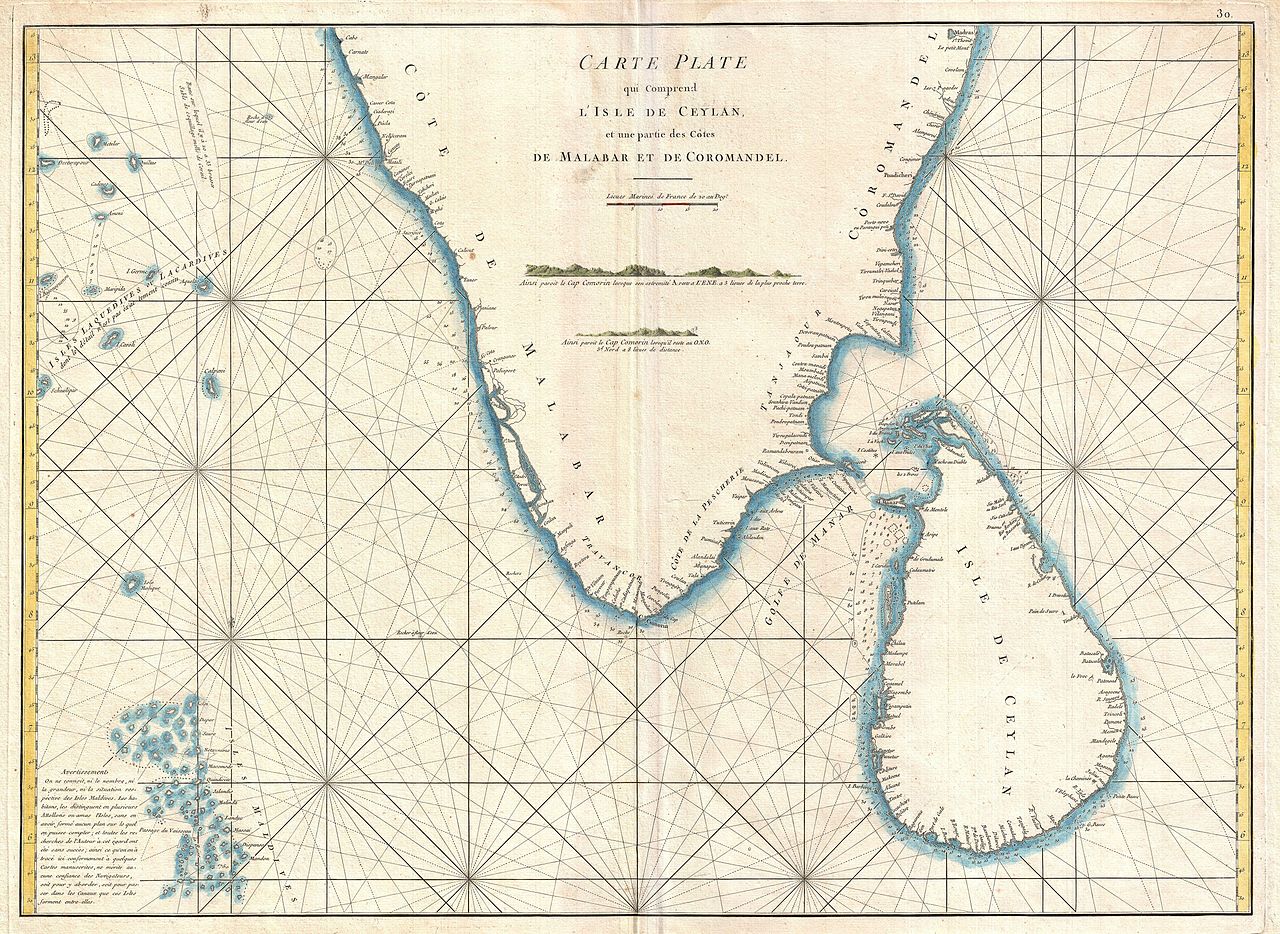 If one ventures out to sea from Colombo, it is still not uncommon to catch a glimpse of a Kerala schooner making its way south. They are still loaded down with the same goods that they have ferried for centuries – jute products, for instance, to be traded in Colombo’s Pettah market for Sri Lankan spices. While trade between the two regions remains, today it is eclipsed by the huge volumes that move between Colombo and Bombay. Kerala and Sri Lanka rarely meet in the modern world anymore, except perhaps in development writings, which marvel at the high social indicators that continue to be shared by both the state and island country.

At the narrowest point of the Palk Strait, Sri Lanka is separated from Tamil Nadu by a mere 35 km of surf. It is the ethnic link between Tamil Nadu, the Indian state, and the rebellion-minded Tamil-speaking northeast of Sri Lanka that strikes the observer whenever reference is made to the two countries’ littoral regions. Kerala is rarely mentioned, even though it is just ‘around the bend’ towards the west from the tip of the Indian peninsula.

The cultural connection between Sri Lanka and ‘god’s own country’ – Kerala – was once vibrant, but now is rather thin. There used to be extensive commerce through the ports of Cochin, Calicut and Kozhikode, which also enabled regular flows of migrants to the island. While their proximity and similar geography has led to long, intertwined common histories, this traditional relationship has now been largely overshadowed by the economic and political realities of Sri Lanka’s engagement with Tamil Nadu and India’s larger commercial centres.

Kerala has a wide stretch of lowland, extending from the Malabar Coast to the Western Ghats, which has long seen coconut cultivation. In meeting the Subcontinent’s coconut demand, Kerala developed the manpower available for employment in copra, desiccated coconut and coir manufacturing, as well as toddy-based industries. Sri Lanka has a wide seaside belt running the island’s perimeter, and utilised toddy-tapping knowledge originating on the mainland. In the early 20th century, Keralites began immigrating to Sri Lanka in order both to teach and engage in the practice.

The two similarly located regions have historically nurtured numerous parallel industries, including paddy and fisheries, as well as rubber, tea, pepper, cashews, coffee, cardamom, arecanut palm and citronella. Almost all fruits grown in Sri Lanka are also grown in Kerala. According to historical records, international traders that traditionally dominated shipping would frequent both Sri Lanka and Kerala in order to buy ivory, spices, gemstones and other goods for European markets. These frequent visitors heavily contributed to the promotion of cultural ties between the island and the mainland.

Ancient Indian texts such as Kautilya’s Arthasastra, the writings of the 4th century grammarian Katyayana, and Ashokan rock inscriptions all refer to three states in the Indian Peninsula’s southern tip – Pandya, Chola and Chera. The former two kingdoms were located in present-day Tamil Nadu; the latter was in Kerala. While historical records in Sri Lanka abound with references to the islanders’ relations with the Cholas and Pandyans, reference to ties with the Cheras is limited. A few Sinhala chronicles, such as the Mahavamsa, Culavamsa, Pujavaliya and Kohila Sandesaya do include evidence that the connection with Kerala significantly impacted political life on the island.

Alternatively, there were migrations and invasions between the two regions. Throughout the first millennium, the Sinhala kings of the island enlisted mercenaries from throughout south India, including Kerala. Historical references also detail migrations of Keralites who joined the Sinhala forces in order to protect the kingdom of Rajarata. A century earlier, the same kingdom had been sacked by a king from Kerala, Kalinga Magha.

Certain Keralan families played significant roles in Sri Lankan court politics, where they served as ministers and wielded tremendous power. The Alakeshwara family, for instance, belonged to a Kerala dynasty that grew very close to the royalty of the 14th century Gampola kingdom. Reference to a minister named Alagakkona first appeared on a Kitsirimevan rock inscription from 1344, relating how Minister Alagakkonara renovated the Kelaniya Viharaya temple and constructed a new building there under the patronage of King Kitsirimevan.

Language plays an important role in relations between migrant communities and their hosts, with words and phrases passing from one tongue to the other. Kerala’s Malayali language first became distinct from Tamil around 750 AD. Although the Sinhala language is rooted in Sanskrit, it shows affinities with Tamil, Telugu and Malayali, as well. Indeed, the presence of Malayali speakers in Sri Lanka has, since the medieval period, led to an enrichment of Sinhala. There are marked similarities in the two alphabets. In some instances, Malayali characters were used to write Sinhala, as can be witnessed in graffiti on the rock fortress of Sigiriya. More recently, a close examination of the signatures of the Sinhala chieftains on the 1815 Kandyan Convention (between the British and the Kandyan chiefs) shows a mixture of Sinhala and Malayali characters.

Religion and culture, too, echo this give-and-take. A Keralan influence that has its origins in the time when the kings of Kandy took on Nayakkar brides from across the water (complete with retinues) is still present in Sri Lankan society today. The osariya or Kandyan sari, for instance, is very similar to its Keralan counterpart, but is today a symbol of authentic Sinhala-ness. Religious practices such as the Pattini deity worship (as well as the worship of Natha, Vishnu, Kataragama, Saman and Vibhishana) were also introduced to Sri Lanka from Kerala. Sinhala classical poems such as the “Perakumba Sinha” and “Kokila Sandesaya” also bear the Keralan stamp.

A melding, a loss?

Over the course of the centuries, the people from Chera/Kerala who migrated to Sri Lanka have become part of the Sinhala community, adopting local names and Buddhist practices. Given the multiple shared features of the two communities, many have felt it easier to merge with the dominant local groups, rather than to try to maintain separations. In areas such as Lunuwila, Wennappuwa and Marawila, there are many descendants of Keralan migrants who today feel culturally and socially closer to the Sinhala people than they do to the Sri Lankan Tamils. However, descendants of Malayali migrants who initially married Tamil women have today become part of the Tamil community in towns along the west coast. Small groups of Cheras living in Dematagoda, Naharenpita and Maradenkulama still do try to maintain their ethnic identities.

Similar to what has happened in Sri Lanka with the native Veddha (the ‘adivasi’), the fading of a distinct Keralan identity and absorption into the Sinhala community are symptoms of the strengthening of the larger Sinhala and Tamil communities. This process is supported by official and unofficial structures involved in state-building – a project that, unfortunately, tends to erase smaller and more fragile identities.

Interestingly, even as the Malayali identity fades in Sri Lanka, there is increasing interest in Colombo about Kerala – almost exclusively because of tourism. Both Sri Lanka and Kerala have come to depend extensively on visitors from the West. India’s burgeoning middle class is also an increasing source of tourists to the two regions. The Sri Lankan tourism authorities have been talking about a possible joint venture with the Kerala Tourism Development Corporation, and there are also proposals for passenger ship services between Thiruvananthapuram and Colombo. If these ties deepen, as per official plans, Sri Lanka and Kerala could begin to “forge partnerships in several areas besides tourism, including health, education and fisheries”.

All such plans are still only in the realm of possibility. The hope, however, is that Sri Lanka and Kerala, while starting small, can again develop healthy cultural and economic exchanges, as two neighbours of the Southasian south.