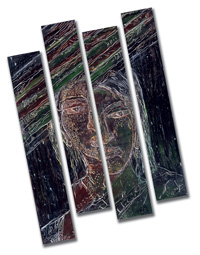 For me, Southasia is a mindspace. Not the officious but ineffectual SAARC. Not the geographical landmass formerly known as the Indian Subcontinent. Not the subject of profound political analysis and postcolonial studies. This Southasia is my homeland; it lives inside of me. I can love it or hate it, ignore it or deny any relation with it. It will still be there, wherever I am – in my skin, my blood, my seeing, my understanding, my responses, my way of thinking. My identity as a Southasian is as real as my identity as a Bengali, or an Indian, or a resident of Delhi. Except for the last, these are not identities based on geography. I am not more of a Bengali than an Indian just because I identify more with Bangladeshi culture than with, say, Tamilian. I am not less of a Southasian because I am more comfortable visiting Bombay than Dhaka. I am not less of a Bengali because I think the Punjabi work ethic is far better. Bengal, India and Southasia (by any other name) are my nurturing culturespaces. They help to shape my preferences, but do not demand unqualified loyalty. Each has its place. Just as our other identities – of gender, religion, caste, community, ideology, personal preference and so on – advance and recede according to relevance and need. Southasian nations are not homogenous. Our ethnic, religious, linguistic, cultural and topographic diversity makes us intrinsically pluralistic. Take language, the main pillar of culture. India alone has 25 official languages. Newspapers and magazines are published in 35, schools teach 72 and radio broadcasts take place in 146. Even Bangladesh, proudly founded on the Bengali language, speaks almost 50 languages. And if this pluralism of tongues – or literature and culture – is threatened, we do not take it lightly. Several language movements have rocked Southasia, the most prominent being that which tore Bangladesh from Urdu-wielding Pakistan. Then, Sindhis had their own anti-Urdu riots. Earlier, there was the ‘pure Sinhalese’ movement in Sri Lanka and the ‘pure Tamil’ movement in India, both against Sanskritisation, followed by a violent anti-Hindi movement in Tamil Nadu. In eastern India, agitating Gorkhas made Nepali an official Indian language. And Nepal’s mother tongues broke free of the hegemony of Nepali this year, as ministers took oaths in Maithili, Bhojpuri, Tharu, Awadhi, Urdu and Hindi, apart from Nepali. Pluralism is alive and well in Southasia. But just living in multicultural, multi-lingual societies does not culturally unite us. For that, we need to know each other. Translation of our ‘language’ literature within Southasian languages, including English (the only language shared across the region), plays a big role here. To consolidate a Southasian identity in a fast-shrinking world we must focus on culture without borders, look beyond nation and language, and celebrate the
ideas, creative spirit and literary treasures of the
whole region.

All in the family
At The Little Magazine (TLM), since 2000 we have been trying in our own modest way to help Southasians understand each other better. We offer ideas and literatures from several Southasian languages translated into English; and two years ago, we established the first pan-Southasian literary awards, the TLM SALAM (South Asian Literary Award for the Masters) and the TLM New Writing Award. Unlike other prizes, which are either local, national or limited to literature in English, these awards honour both literary masters and emerging talent in any language from all of Southasia. After all, confining literature within political borders is absurd. For example, Indian Urdu literature is incomplete without Urdu literature from Pakistan. Bengali literature spans India and Bangladesh, while Tamil literature embraces Indian and Sri Lankan works. Our literatures have already erased international boundaries. As readers, we have anyway moved away from narrow political confines to a wider, open mindspace. We just need to make it another home. Which is not difficult, since Southasian countries have what Wittgenstein would call a ‘family resemblance’. This is not surprising, since they are indeed of a family – though a rather bickering one, often disowning common ancestors. But multiculturalism is us. And when you can gather together very diverse peoples and cultures to make a country, you can just as easily expand it further to make a global region. Once we learn to embrace difference, unity comes easy. For true regional integration, however, we must recognise the sovereign rights of individual nations – not easy with India towering over its neighbours. Besides, Southasia is brutally patriarchal, our current ‘Asian values’ reflected in our violence against women and minorities. When such nations come together, we merely have a larger patriarchal family, with the strongest playing patriarch while smaller members nurse their resentment by plotting ways to harm the head of family. Held together by family resemblance, Southasia is a graded reality, depending on where you sit. The Indian, sitting grandly at the centre, may be more of a Southasian than the Afghan perched at the far end, especially since India’s diversity helps in neighbourly bonding. In language, culture, food, dress, custom and even weather, Indians from Sikkim are culturally closer to the Nepalis and the Bhutanese than to Indians from Gujarat or Kerala. Indian Kashmiris share more with Pakistanis and Afghans than with Indians from Orissa or Tamil Nadu. Indians from West Bengal would feel at home with Bangladeshis, but would  consider Indians from Rajasthan or Andhra Pradesh rather curious. Indians in Punjab would identify more with Pakistani Punjabis than with Indians from Assam. But what is a comfortable extended family for Indians may not be such a snug fit for their siblings. Does Afghanistan have much in common with Nepal, or Pakistan with the Maldives? Is Bangladesh culturally similar to Sri Lanka? The degree of resemblance dwindles significantly as the family gets bigger and spreads out.

Historical cut-off
Some years ago, a TLM reader from Karachi, a respected sociologist, wrote in to say that a Southasian identity was impossible given India’s hegemony and dominance. He feared “being swamped by an increasingly Indianised Hindu (or a Hinduised Indian) culture” and believed that ‘South Asian’ was another name for ‘Indian’. “Should I know who Draupadi is? I live in a country where 97 percent of the population is Muslim, and has been so for at least 50 years – where Islam is dominant, culturally and politically.” To Pakistanis, Hindu mythology is not benign like Greek mythology; it is seen as antagonistic. To alter this situation, he said, India had to be more accommodating. Swiftly, we had an infuriated but erudite response from a reader in Bangalore, saying that what Pakistanis see as Hindu mythology is actually the common heritage of their region – the Vedas were composed in what is now Afghanistan and Pakistan, and we must not allow the Hindutva brigade to monopolise this legacy. “If Pakistan has successfully wiped out from its memory its glorious pre-1947 past, that is a grievous loss to its people,” he said. “The lurking fear of being swamped by Indianised Hindu or Hinduised Indian culture,” he continued, “will surely be exorcised by acknowledging the heritage that the South Asian countries have, each in its own splendid, individual and separate history.” The deliberate erasure of shared cultural history is indeed tragic, because it is through this that we understand each other. Mithila is not just a place in Nepal; it is the land of Sita, of Buddha and Mahavira – Mithila links us to three of our religions. We need to claim our common heritage, whether Mohenjodaro and Taxila in Pakistan or Nalanda and Bodh Gaya in India. Rabindranath Tagore belongs to both Bangladesh and India, Sadat Hasan Manto to both India and Pakistan. To understand ourselves in a postcolonial world, we need to reach into our race memory, and not be absurdly limited by artificial cut-off points in our living histories. Because culture keeps us sane. Music, cinema, art and literature have a power over our lives that political and other dialogues can never wield. They connect people, communities, countries, generations. They speak even to the enemy. Culture seduces and converts. It helps us know each other and recognise ourselves as Southasian. And it boosts our confidence. For we can only be Southasian if we are confident in our own individual identities – 60 years has been long enough for that.

Antara Dev Sen is founder and editor of The Little Magazine, based in Delhi.